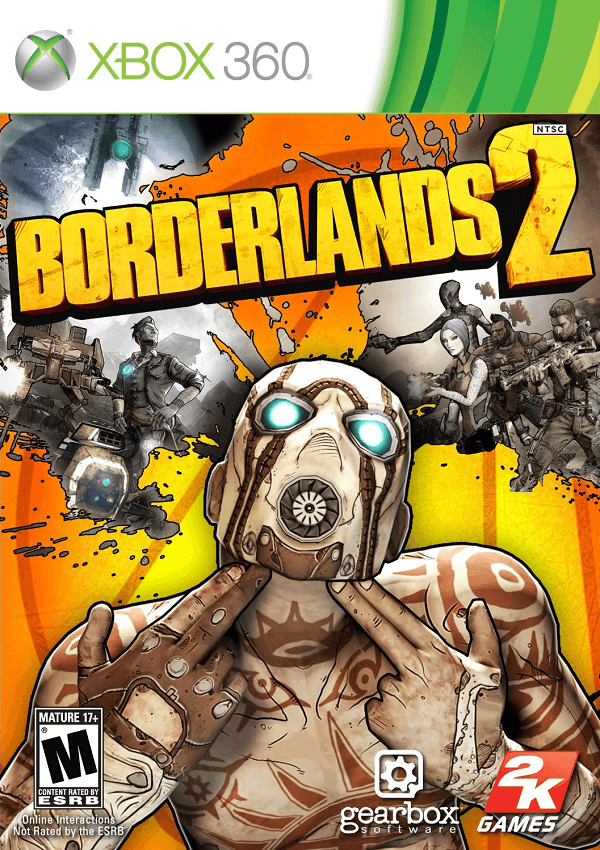 Overview:
There are many games that are eventually held up as genre defining titles, however every so often a game comes along that goes beyond defining a genre and instead shatters the boundaries of genre and becomes something outstanding. Back in 2009 a game was released that created an entirely new experience that combined engrossing gameplay with excellent multiplayer. Now three years later Gearbox has brought us a sequel to that game in the form of Borderlands 2. Does Borderlands 2 surpass its predecessor? Let’s find out.

Story:
Five years have passed since the events of Borderlands 1 and Pandora has become a planet overrun by the Hyperion Corporation which is led by a man named Handsome Jack. However rumors of another, even larger vault, existing on Pandora quickly bring more Vault Hunters to the planet looking for perhaps the rarest treasure in the entire world. 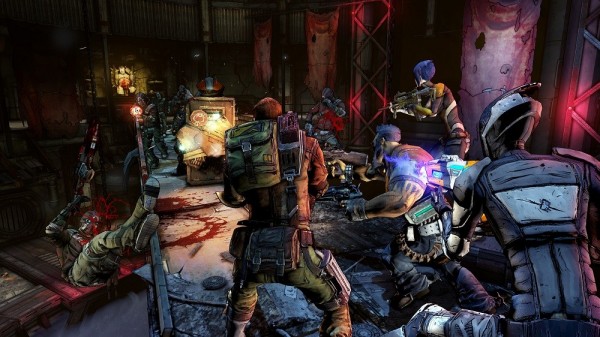 This draws the attention of four new vault hunters in the form of Axton, Salvadore, Zer0 and Maya who quickly discover that there are more than bandits and beasts to deal with on Pandora. Hyperion and Handsome Jack have Pandora staring down the barrel of a gun as they mine Eridium from the planet, forcing the inhabitants to either deal with it or die. Players will quickly be drawn into the struggle that the resistance faces against Handsome Jack and it is one that not only contains multiple plot twists but also expands upon the previous game.

While Borderlands 1 may have had an introduce and forget type of storyline, where players would often have only one simple goal and just a few things standing in their way, Borderlands 2 provides constant narrative about the events going on around the player, even expanding upon the events of Borderlands 1 and the original characters and providing more of a story than the first game ever did, making the main quest a joy to experience and the only thing that may side-track a player from working through them quickly are the hilarious and varied side-quests that can be accepted and completed. 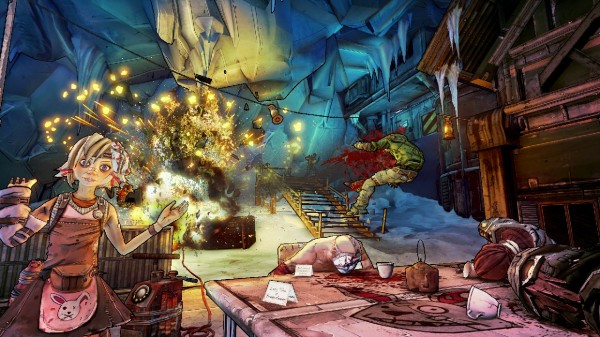 Players will encounter a large number of eccentric characters along their journey to bring down Handsome Jack that need things done. What sets these characters apart is the fact that most of them have mini side-stories of their own and also have plenty of comedic dialogue. Now I’m not talking about standard people either, but people like Tiny Tina who happens to be a child with a precocious little girl who loves to blow things up, Scooter the redneck mechanic and even a few old faces appear.

While the main storyline and the side-quests create a compelling storyline, they wouldn’t be complete if it wasn’t for the fact that Handsome Jack is perhaps one of the best antagonists in recent memory. He is not only humorous, but also hell bent on making sure that anyone who gets in his way is stopped, preferably while he sarcastically mocks them over their radio. His cruel and twisted personality make him someone you just love to hate but simply cannot get enough of.

Visuals:
One thing that is quite noticeable to anyone who has ever looked at Borderlands in any way is the fact that the game features a cartoonish art style with plenty of bright colors. Thankfully the game is practically eye candy with how great it looks on televisions and thanks to the art style the developers could obviously take some liberties with character design, making some enemies more cartoonish and hilarious than they would have been able to pull off with any other style. 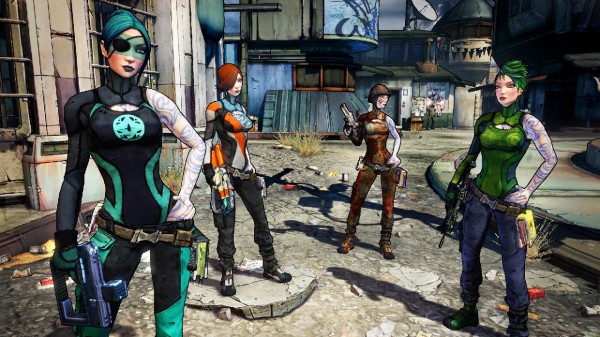 It is worth noting that unlike Borderlands 1, the massive amount of guns that the player will now come across often have a number of visual differences making almost every gun you acquire different from the last, even if it is the same type. Plus, gamers can now customize their character slightly with unlocked color skins and hairstyles to give their Vault Hunter a personal touch.

Audio:
While the playable characters in the game are still giving little actual voicework, the rest of the characters in the game have been given excellent voice work. The aforementioned Handsome Jack’s personality truly shines thanks to the voice actor’s work with the character. The amount of humor that can be found within the confines of Borderlands 2’s dialogue works flawlessly thanks to the quality found in this department. 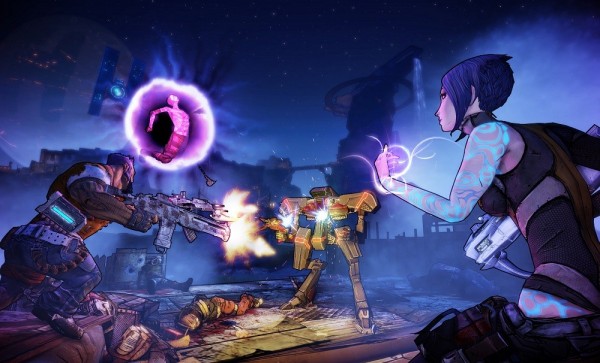 Outside of the voice work, the game features some rather standard background music which can be forgetful at times, though the game does feature some stellar sound effects which shine the brightest during hectic fights with four players taking on a mob of enemies.

Gameplay:
As before, gamers will be able to select from four different vault hunters to choose from and while some of these characters bear some similarities to the playable characters in the first title, they are diversified enough to make each character a new experience. It also helps that the loot system has been revamped and players can find themselves struggling to pick certain items to accentuate the skills they’ve already trained. 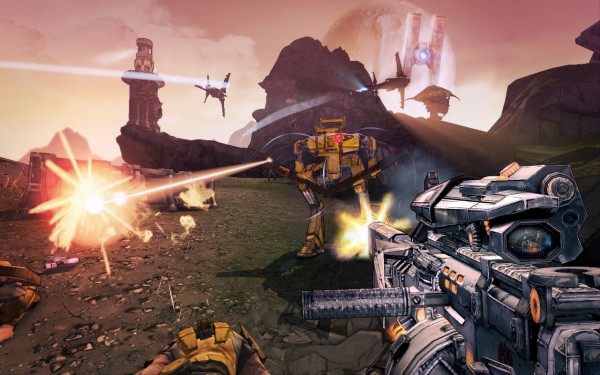 Besides shooting enemies in the face, one of the biggest draws in the original Borderlands was the loot system and no one will be disappointed with the amount and quality of the loot they’ll find inside of Borderlands 2. Each piece of equipment has been made flashier in more ways than one and also diversified, often offering huge bonuses with minor drawbacks. Players can find special shields that provide extensive protection at the cost of health or grenade types that will split up into seven smaller grenades, seek out enemies and suck their health out for the player but ultimately do less damage than a standard explosive grenade.

The way that this is often handled is through a “Manufacturer” label that is placed on nearly every item in the game, especially when it comes to guns. Each type of manufacturer will have a special traight or stat adjustment, like Hyperion guns becoming more accurate while you shoot, Jakobs guns shooting as fast as you can pull the trigger for large amounts of damage but constant reloading, Maliwan types which deal in elemental damage, Bandit guns with misspelled names but more bullets and so on. 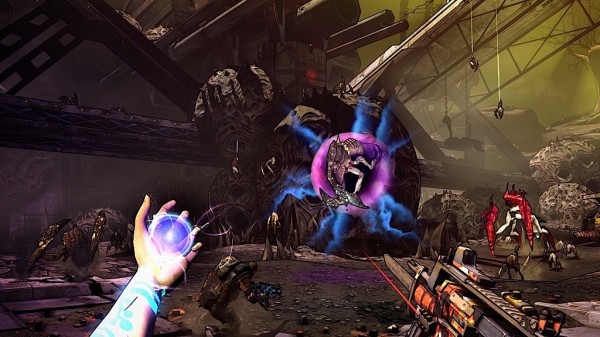 Players will quickly understand certain manufacturers which will allow for a faster item analysis, but there is just so much loot to be found that players will spend plenty of time seeing if this shotgun that shoots seven explosive rockets but has to be reloaded each shot is better than their SMG that fires corrosive bullets with a large magazine. Given that there is practically an endless flow of weapons you never know what will pop out of the latest bandit you turned to slag with your powers.

While side-quests may be something that is standard in every game, these diversions in Borderlands 2 not only provide some extra story but also are so varied that you will never have a clue as to what you are going to be doing next. There are your standard kill X amount of enemies or gather Y amount of items, however these are usually spiced up by making the items something hilarious. However there are also a number of varied side-quests as well, including racing, a few mysteries that have to be solved and even one where you simply have to shoot a guy in the face. 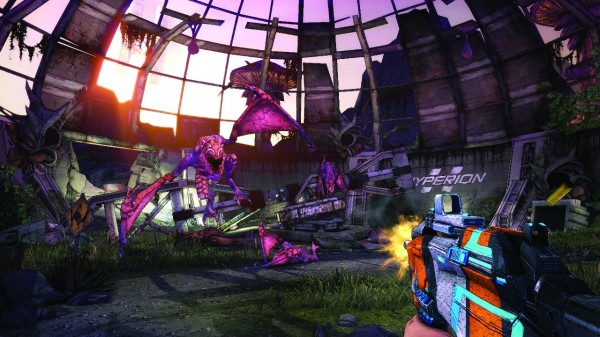 While most players may be able to make their character into a walking power house capable of holding its own against the forces of Pandora, the fun really starts when gamers jump online with co-op partners. As before up to four people can play in one game at any given time and there are no level restrictions, meaning a level twenty player can join a level ten game and joining and leaving games has never felt smoother as the transition is hardly noticeable.

Borderlands 2 balances out co-op partners by increasing the difficulty of the enemies that they will be facing off against as well as the amount of enemies, but also rewards co-op play with stronger loot. Of course this does mean you’ll have to share the loot however so hopefully you’re playing with some good friends who like to share. However even if your items happen to be looted on accident, Borderlands 2 features a simple trade system to trade items and money with fellow players.

Overall:
Borderlands 2 does more than any fan of the first game could have ever hoped. Not only do we find more refined loot and gunplay systems but gamers are finally given plenty of hilarious side-quests and even a fleshed out and intriguing main storyline which was something its predecessor lacked entirely. With new characters and abilities to take down the bandits and creatures of Pandora with, countless hours to be spent playing with others and enough loot to fill the Atlantic Ocean, Borderlands 2 offers an experience unlike any other and one that should not be missed.