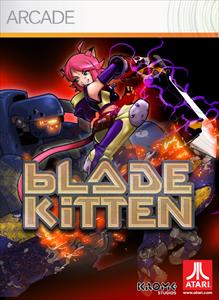 Overview:
What happens when you combine platforming gaming with the agile quickness of a catgirl bounty hunter? Well you get Blade Kitten of course! Coming to us from Krome Studios and the web comic creation of the same name by Steve Stamatiadis we are placed on a lawless world currently occupied by the Sol Army and the native alien Squamatans.

Story:
Kit Ballard is a space bounty hunter, known as a Breaker, and has just landed on Hollow Wish looking to pick up a very expensive bounty, the leader of a group of bandits known as the Norteun Wolves. Only problem is there are no laws on the planet of Hollow Wish, and another bounty hunter, Justice, just blew up your space ship.

What initially occurs will begin to set the whole story of the game with small snippets added in between levels that help to drive the game along. There is little character development occurring beyond the fact that Kit eventually joins with her new ally/pet Skiffy and they begin their journey together. The story stays quite set on following the bounty, but Kit is very easily persuaded into helping anyone that asks her to perform a task which can cause the story structure to flutter and lose track of what it was initially trying to establish. 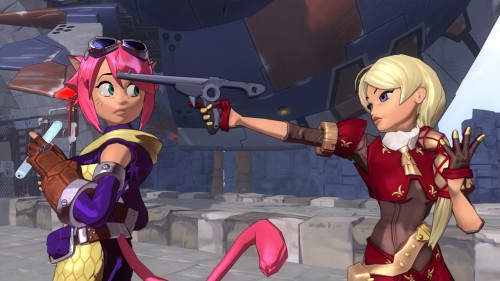 The story is little more than a structuring to the game that starts to take a back seat to the action shortly after the game begins. The various cutscenes between levels and during levels will help fill the voids and sometimes explain why you are where you are, but there are many things that have been unexplained, but then again this is only Episode 1 of a two part series. Also in the help area of the menu the game has a helpful glossary which will explain a few small details which aren’t explained normally through the story.

Graphics & Audio:
From the very opening cutscene players can expect to see very bright visuals that appear very much comicbook like in design but also gives the feel of an Anime styled game. Kit Ballard is well drawn and comes with many different costumes you can eventually purchase later in the game to help change her appearance adds a nice touch to the heroine. The other characters in the game, unique characters that is, also contain the same amount of care put into their design that singles the game out for its unique appearance. One downfall though is that many of the enemies you will be facing always have the same exact appearance regardless of which level you are playing.

Each level you play through will have action not only happening on the main pathway you are traveling but behind you as well. Most levels will have action occurring in the background which provides a more immersive experience into the breathing world that one would not usually find in Arcade game. 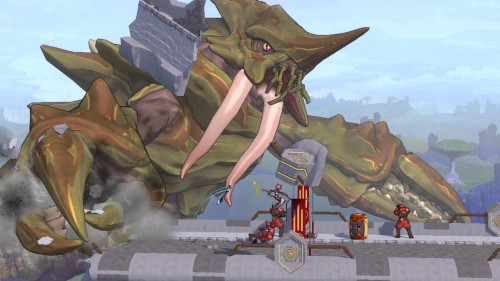 To top it all off with the gorgeous visuals, the cast of characters has believable voice actors performing their rolls in the story. There are moments when you are fighting enemies that they will continue to spout the same lines over and over again but more often than not the characters you meet and talk with sound perfectly in character. Though the games background music does slowly begin to become repetitive as the longer levels drag on, each level contains a unique song which provides a break in the occasionally repetitive sounding beats.

The graphics are not without their errors though. As I said before the game does feature three dimensional space even though you can only traverse left, right, up, and down. This can lead to problems where an enemy soldier will glitch halfway through his intended path and become stuck and unkillable due to not being able to reach them. Also the Sol soldiers occasionally sink into the floor while still alive.

Gameplay:
Despite the graphical glitches the game may have, navigating around the world of Hollow Wish is extremely enjoyable. The fact that Kit Ballard is part cat aids her adventurous spirit greatly and provides players with a number of different ways to get around. She is able to easily climb nearly any wall and even swing along the most ceilings with ease which provides her access to many varied paths to take.

Many of these off shooting routes however will simply lead to a treasure chest or another collectible which the game has an abundance of, as well as costumes for Kit as a reward for finding them all. These collectibles provide an extra bit of replay value to the game as you explore each level thoroughly to make sure that you had not missed anything that could make you miss out on a new costume. 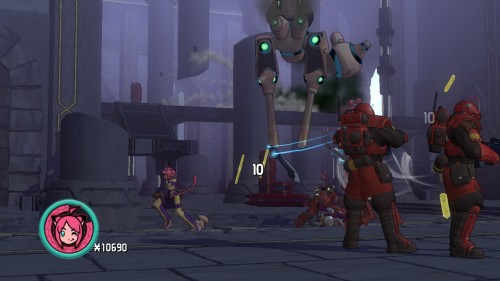 Besides being able to climb walls and climb along ceilings Kit also inherits her feline grace in the form of a stamina bar which, when used, will make Kit run faster, make long leaps through the air, and even climb up walls faster. The turbo is very useful for quick navigation throughout a level but sometimes can lead to the controls acting unpredictable and causing you to make your way back to where you once were. In the same display of the stamina bar, there is also Kit’s health meter; signified by a pink ring. Plus an anime style picture of Kit’s face which has a nice touch of changing depending on how much health Kit has, her situation, and even when she is angry enough to perform a special attack.

As in any good platformer, there needs to be a decent combat element to go along with all of the various jumping and climbing. This is unfortunately an area that Blade Kitten falls short on, but not in the standard way you may think. Since as it turns out, the actual attacks you are able to deliver are very intriguing and the way attacks are handled with the Free Floating blade is definitely unique. Only problem is the enemies that you are facing are extremely simple.

There are close up attacks and long range attacks each handled with a respective button press but unfortunately the enemies you will encounter can easily be dispatched with just a few simple presses of these buttons and when stronger blades are bought, just one swing can drive your opponents into the ground. The special attacks are simply a pre-set attack movement but each is unique to the blade you have equipped. Though as I said before, except for a few interesting boss fights where you will have to outmaneuver your enemy with Kit’s array of attacks, most enemies are simply way to easy to defeat. 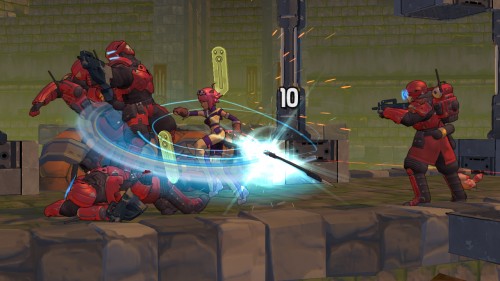 Another small feature is the fact you will be able to collect money known as Hex around the world and more often than not following these paths of Hex can lead you down different paths you would not have before. This Hex can then be used to purchase food items which can increase your health and stamina bars, stronger blades and outfits for Kit to wear. Some of these outfits even change her into a completely different character in appearance but can cost quite a lot of Hex to acquire. The food items are very beneficial as with the purchase of enough health upgrades Kit is nigh impossible to kill. But without a modifiable difficulty she really does not need the extra health boosts to make it through the levels.

Kit doesn’t travel alone throughout her adventures on Hollow Wish as she shortly makes friends with Skiffy the skiff. Skiffy is more or less a tool used for the small puzzles you will encounter throughout the game and retrieves Hex that is outside the 2D plane that Kit can travel. She also will be rewarded with a lizard/horse creature called a Noot which will allow you to traverse the landscape of the larger levels. The Noot is an interesting feature but ultimately feels slightly clunky to control especially in the dismount which can cause frustration from Kit constantly getting back on the Noot after hopping off.

Overall:
Blade Kitten is a very fast paced and light hearted game that falls short in some areas. The game itself is presented with gorgeously bright graphics which are unique to Blade Kitten alone and definitely provides a unique gaming experience, albeit a very easy one. However if you can overlook the easy gameplay, Blade Kitten has plenty to offer and you will be hard pressed to find any game like it now or in the future on the marketplace. At the price tag of 1200 MSP it offers quite a bit of replayability thanks to the collectibles and level exploration on top of a respectable amount of play time from start to finish.

I give Blade Kitten: