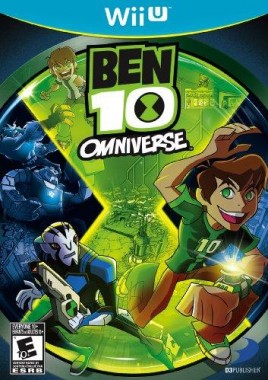 Overview
Ben 10 has been a staple of children’s television for years now, with several video game adaptations that have seen releases over the years. Yes, you might not of heard of many of them, but they do exist. Most of the time, these titles based of the franchise fall somewhere between simply “good” to mediocre, and fall short of creating any type of memorable experience – even for the hardcore fans of the program. Ben 10: Omniverse is yet another example of this, but this time our hero is trying to capture an early market on the Wii U. What you have here is a port of a game that hasn’t seen much publicity to start with, but does Ben 10: Omniverse for the Wii U leave us with anything to write home about? Let’s find out.

Story
To be honest, I have never paid too much attention to Ben 10. I am well aware of the popular franchise existing and have seen all of the marketing at work in stores, but it is a bit past my time – and never really tapped my interest enough to give it a second look. Whether you are familiar or unfamiliar with the name, you should know that Ben 10: Omniverse plays off the television show with the same name, with gamers taking the role as Ben Tennyson as he goes up against the evil villain known as Malware. 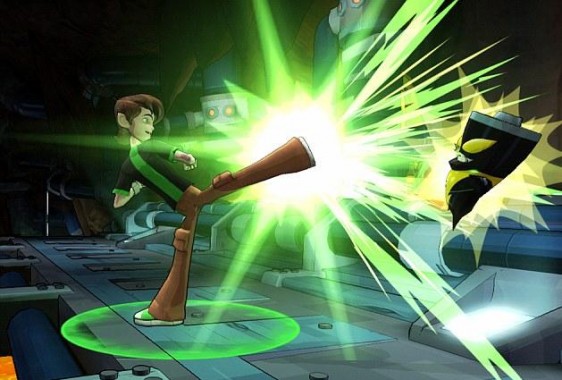 There are a bit of interesting happenings and a little bit of light humor sprinkled in that young fans are sure to love – but for the most part, those who truly understand Ben 10 are going to be the only ones that take away from this campy tale. I will say that the concepts of time travel, aliens, and sci-fi certainly seemed to be appealing, but after a short while – slow pacing takes hold and what could be an easily enjoyable adventure turns a bit stale, as it seems the developers simply wanted to throw this title out to the public due to the namesake, with the quality of the overall narrative taking a decent sized hit as a result.

Gameplay
I want to say that Ben 10: Omniverse is a great game – but that is only half right. This licensed romp is an action title full of ideas, but never really attempts to push the boundaries on it’s own concepts in order to produce an interesting experience. As I mentioned, players take the role of Ben, who has a special power in the form of his handy device known as the Omnitrix, which can let him change into aliens to fight evil. Ben himself can fight enemies with standard combat, as he features a variety of stiff kicks and melee maneuvers to put the beat-down on foes. Sadly, this combat in itself is a chore, as enemies can have an absurd amount of HP, so the player will be tapping their face buttons like mad just to get rid of only one of the many foes on the screen. Now, the combat isn’t really broken, it’s just a bit robotic and that alone is why using the Omnitrix is such a necessity. 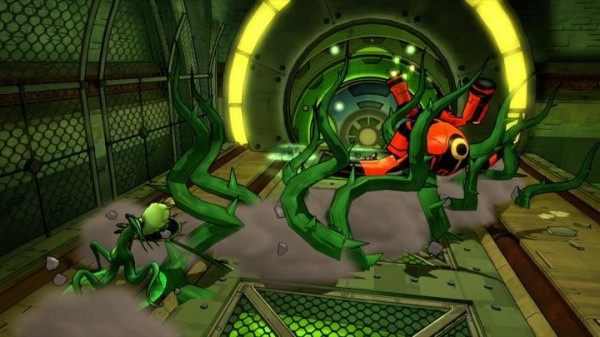 Over the span of the game, Ben can earn new unlockable species for his Omnitrix, which of course allows for instant transformation into a new form. The idea of keeping the game fresh is brilliant with this mechanic, as players will certainly enjoy the wide variety on display. However, the aliens usually just feature a projectile of a different color or a more powerful melee, so fighting as these beasts lead to some dry results. Making matters a bit more tedious is that the Omnitrix has a timed meter, so Ben can only stay in these forms while he has enough charge. I get the idea behind this, but this kid isn’t too powerful to start with. Being rewarded with a new playstyle – only to have it ripped away a short time later can be a bit tiresome.

Luckily, Ben does have a side-kick by the name of Rook. While you could certainly play the game in single player, the definitive experience is found with more than one player. No – aside from a few special moves, Rook doesn’t offer a lot, but he can be a competent companion if controlled correctly. The AI however is not too great, and those going solo are sure to be frustrated as Rook just stands there, letting Ben be pummeled by on-screen targets. The enemies themselves can become a bit glitchy as well, and don’t offer much in terms of strategy to defeat. 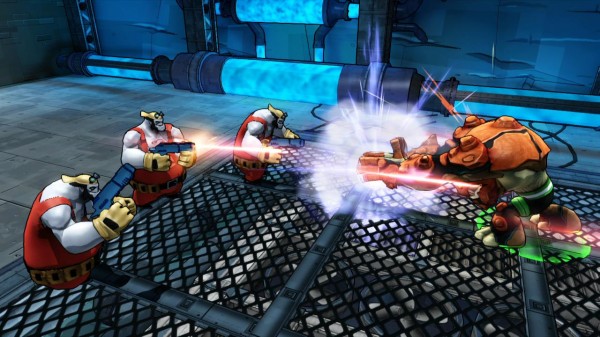 To be honest, I wasn’t too fond of even using aliens in combat. Sure, the attacks are different, but that’s really all they have to offer. Puzzles however give these alternate forms meaning. As you progress, you will come across several areas that require one or more objectives to be completed before moving on. For instance, if a bridge needs to be formed, you would switch a specific alien that can literally turn into a bridge. When a switched needs to be hit with an electrical charge attached, just summon the handy Feedback. This alone adds a small amount of depth, but the pacing for these puzzles have been executed poorly – meaning that most of the time it will be battle, solve a simple puzzle based off of acquired alien forms to move on, and then repeat. I can’t say this formula is broken, but it feels overly predictable, making the game feel linear as a result. This is of course a title targeted for children, but the over-usage of hand holding (where the game pretty much spells out how to proceed) also over-simplfies things and takes the fun out of the otherwise clever mechanics at hand. 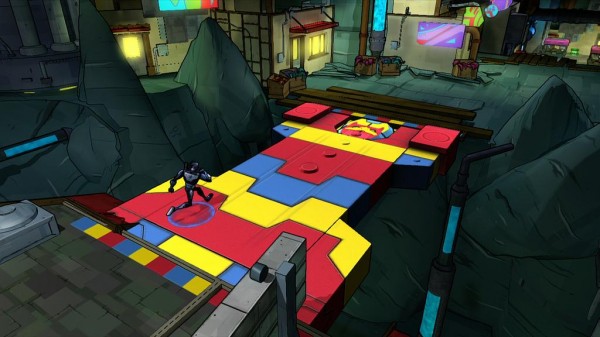 Since Ben 10 is a Wii U offering, I expected to see a little bit of Gamepad usage. Sadly, this is yet another shortcoming of Omniverse. Instead of maybe utilizing the device to compliment all of the alien forms and variety the game has to offer, Ben 10’s usage comes down to a menu – or a character wheel to be exact, letting the player change forms from the Gamepad. These forms can be mapped out on the D-Pad for quick use, but switching to one of the unmapped abilities means an abrupt halt to the action. When playing on the television, the player is treated to a plain, blank screen, where the potential of the device goes to waste.

Visuals and Audio
I am a fan of cell shaded games, but the Wii U could certainly pull off better than what Ben 10: Omniverse has to show for itself. Environments do have color and detail, but tend to just mesh together due to the similarly set levels. The aliens and even Ben 10 are nice to look at, but are stiffly animated, which makes the combat feel a lot clunkier than it actually is. Graphical glitches also came into play quite often, with enemies disappearing right off the screen during chaotic bouts. I remember this same problem occurring during my time with Warriors Orochi 3, but Ben 10 is miles below that title in terms of power, so the only other excuse for it’s flaws comes down the fact that this game was rushed out the door to meet a deadline – leaving the fans of the franchise with one function-able, but sloppy experience as a result. 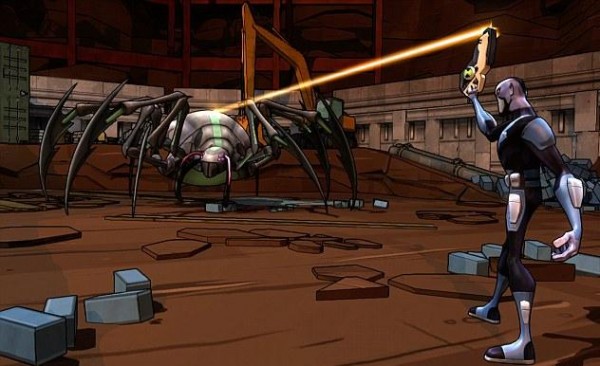 Soundtrack wise, the tunes at hand capture the industrial setting quite well, but are a bit forgettable overall. Now, that isn’t to say that all the audio is bad, as the voice acting is far from it. While the story is a bit sub-par, the small cutscenes that do play are brought to life by Rook, Ben, and all of the other encounters in the game – so those who adore the show might at least find their fix with these accurate performances that give the game a light and adventurous tone.

Overall
Ben 10: Omniverse is a port for the sake of being a port. Every great idea within the game is held back by another, as the poor pacing and boring level design never lets the player do anything inventive with the mass amount of forms Ben can become. Co-op is a plus, but again – the graphical flaws and lack of polish still keep Ben and company from reaching their true potential. At the end of the day, this kind of product is something we expect from licensed games, as it’s a sub-par filler title that exists in order to add another notch in Ben 10’s resume. For fans, I would normally say “why not?” as there is a still a solid experience to be found, but with the Wii U version, I can’t offer that advice. Without proper utilization of the Gamepad on top of the numerous issues, Omniverse has came to the Wii U without any purpose, and stands as a game that feels dated and uninspired as a result.