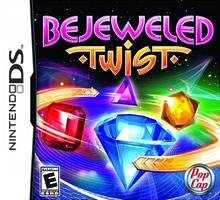 If you love your casual games, or even if you hate them, you’re sure to have heard of Bejeweled. Bejeweled Twist is the latest game from PopCap to grace the dual screens of the Nintendo DS. The premise of Bejeweled is simple enough, match jewels, and they will explode. Bejeweled Twist for the DS brings together four Bejeweled Twist game modes all on the one cartridge. 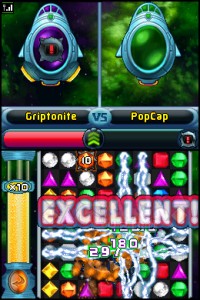 knew. I can manage to move a green jewel all the way across the screen with relative ease: kind of destroying the puzzle based challenge.

I will admit the addition of troublesome jewels is a welcomed addition. Locked jewels, bombs, bonus jewels that can blow up near-indestructible rocks all add a little extra challenge to the game. But not much. The biggest disappointed here was that I managed to not destroy a bomb in time, only to be given a second chance. Fourteen levels into the game I was given another second chance, and again, until finally on my fourth failure to destroy a bomb I managed to secure a game over. Classic mode is the only level based version of Bejeweled Twist, with levels being passed when you fill up the little tube on the left.

Zen doesn’t differ too much from the classic mode of Bejeweled twist. Same mechanics, same graphics, same goal. But no levels. While you can obtain “levels” you don’t actually progress to a new level. There isn’t really all that much to say about Zen mode that hasn’t already been said about challenge mode, except that I highly doubt it will result in any form of enlightenment from extensive hours of playing as the name may suggest.

There are two modes that can be unlocked in Bejeweled Twist, Challenge mode and Blitz. Challenge mode is by far the most difficult, but most interesting version of the game. You still play it exactly the same way, but rather than getting a certain score there are thirteen unique challenges for you to 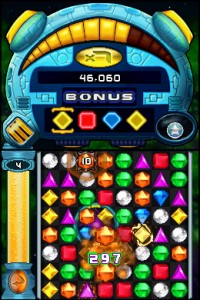 complete. Usually they require you to break a certain number of same-coloured jewels in order to beat the challenge. This can be a difficult task at times, but is a nice little break (excuse the pun) from the regular score based goals of Bejeweled Twist.

Blitz is more akin to the original Bejeweled, you have five minutes in which to obtain the best score you can manage. It wouldn’t be “twist” without twisting, so the same mechanics apply to this game. You can earn more time by catching some good breaks during the game, but five minutes is probably enough.

If you feel like I am repeating myself, then you have managed to gain some insight into what it is like to play Bejeweled Twist. The problem with Bejeweled Twist being on a DS, is that it doesn’t really take advantage of the DS to create a unique gaming experience different from any form of downloadable Bejeweled. The dual screen is lost on this game, only providing additional information at the top when necessary, or in the case of classic providing some animations. Furthermore, while the touch screen is a nice feature, the game doesn’t make full use of the stylus and ability to make precise movements. The only benefit I can see is that there is the ability to have four game modes in the one place, where downloadable content may have to divide them up. 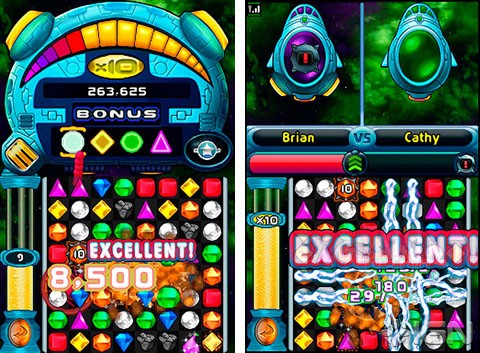 The graphics in Bejeweled Twist are nothing spectacular by any means. But then again, they don’t have to, nor are they expected to be. As a casual game, Bejeweled Twist takes a minimalist approach to visual presentation, having essentially only different coloured jewels as the main source of graphics. With the exception of Classic Mode, which deviates from this by employing a transitional animation of a space ship flying between planets as you progress from levels. Similarly, the audio functions merely as a “filler” so that you don’t play the game in absolute silence. 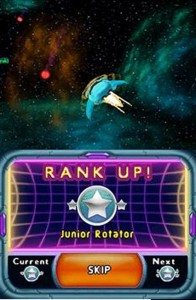 Whether you love or hate Bejeweled, or sit somewhere in between, there is one major flaw with Bejeweled Twist for the DS. That is, that it is on the DS, and it is a game cartridge. Bejeweled has a long history of being a downloadable game, on smartphones and all that jazz, you know, the usual. Given that the there is a shop for the DSi and 3DS, it seems a little wasted to put this title in cartridge form. I’m sympathetic to the DS users who can’t access the shop, but it just seems to me like owning the physical game takes away from the extremely casual nature of the game. The game plays fine, but as I started before doesn’t really utilise the functions of the portable console as well as it could. Don’t get me wrong, I do like Bejeweled, the only problem is that this game doesn’t seem to be designed for sporadic play sessions, which is one of the best features of Bejeweled. It’s simple graphics, its idiot-proof game mechanics all scream to be played while waiting for a bus, or slotted in between some other everyday life activity. If you like Bejeweled, Twist may be worth your time, if not, then I’m sure this review has managed to affirm your stance on the game.