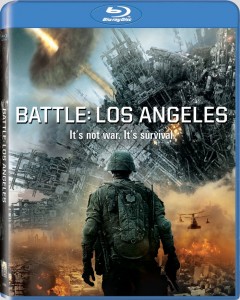 When Battle: Los Angeles was released in the cinemas, I’ll admit that I didn’t even bat an eyelid. I just skimmed over the synopsis, decided it wasn’t for me, and moved on with my life. However, it seems to film has found me yet again, so I decided to invest the time to give it a go – perhaps it would surprise me.

Unfortunately, it did no such thing. The film is exactly as I expected it would be: flat and predictable. With an exhausted and clichéd narrative and characters, Battle: Los Angeles was almost doomed from the start. The visual elements had the potential to redeem it, but here I also feel it fell short, overall making for a very forgettable experience.

The narrative is your typical alien meets army hero film. Sergeant Michael Nantz just got his retirement approved after a long and painful career with the Marines. He is on the brink of leaving, however when meteors begin to approach Earth at an alarming rate, Nantz is called back in to do his duty and protect the civilians. Upon arriving at the site of these ‘meteors’, the team of Marines is shocked to find groups of unidentified species shooting at large across the coast. The team are then dispatched to rescue a group of civilians trapped in a police station before the Air Force bombs the entire area in a bid to kill the aliens. 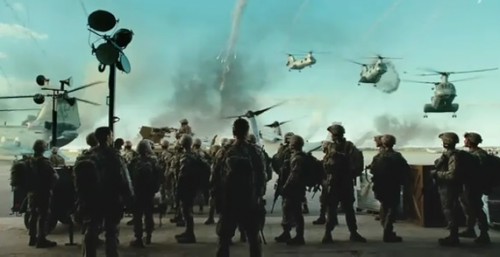 As far as a plot goes, this is about as textbook as it comes. Every single person has seen this story in at least one other film during their lifetime (basically any kind of action or sci-fi flick, really). Man fights between the guilt of his past, aliens come out of nowhere, and said man must rise to the status of hero again. The narrative seemed to take a backseat to the action – and while this is perfectly okay, I wonder why they even bothered to make a story. In fact, they should have just called it Marines vs. Aliens, because it would have summed up the narrative in three words and we could have all just watched the shooting instead.

What was also disappointing was that while Liebesman could have at least tried requesting a decent reason for why the aliens are on Earth, he settled instead for a mediocre one: they’re apparently trying to steal our water. What could have become very District 9-esque soon spiralled down into an obvious quick attempt to throw any possible justification for unidentified species to be on our planet.

The main character of the film is Nantz, played by Aaron Eckhart. While most of us will know him for his brilliant portrayal as Harvey Dent alongside Christian Bale and Heath Ledger in The Dark Knight, Eckhart’s latest character is anything but – any character development is exchanged for a lump of clichés instead. Nantz is a man who has seen the struggles of combat, and must live with the guilt of having his entire crew die while under his leadership. He must rise to the occasion when his team needs him, and in doing so, he must come to terms with his own past. 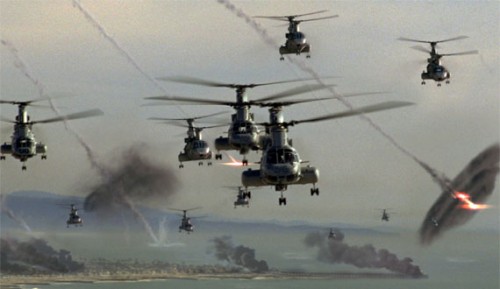 The central flaw to Nantz’s character is that he just doesn’t click and develop a relationship with the audience. While Eckhart had the potential to play the role poignantly and give the audience something powerful, he instead seemed to settle for a pre-conceived role – it’s as if he’s just going through the motions of being regretful instead of actually feeling regret. It can be convincing for a few brief seconds and at moments, such as when Eckhart refuses to abandon the leader of this new mission, he almost had me; then the emotion stopped, and it just became acting again.

The other characters almost merge into one another: aside from 2nd Lieutenant William Martinez (Nantz’s boss on the alien mission), the other Marines do not stand out or contribute a great deal to the overall narrative. In fact, the only face I recognised was Corporal Kevin Harris (and that’s because he was played by Ne-Yo). Martinez floats between being likeable and unlikeable; it’s almost as though the writers had bipolar and couldn’t decide whether they wanted him to be spiteful at Nantz for his history or a powerful leader. This again could have been utilised as great character development, but instead it was confusing to the narrative.

The visuals were perhaps the best aspect of Battle: Los Angeles (although that’s not really saying much, given the rest of the areas). There were some unique shots that wouldn’t be typical of an action/sci-fi flick, and had me pleasantly surprised – handycam shots and close ups akin to those found in first person shooters gave this film an interesting touch. However, for every interesting or unique shot, there were a dozen others that were predictable. None of the scenery or backdrops had anything special about them either, and for the most part, the cinematography was average. 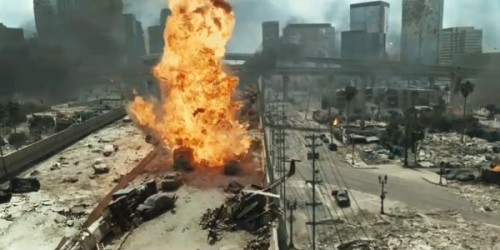 Of course, special effects play a massive role in this film. What did confuse me, though, is that while aliens are CGI, there is some conflict in their appearance. From far away, they look like robotic Terminators; up close they have fleshy insides. This animation threw me off, and it seems Liebesman just fell short again when it came to character creation – even with the unidentified species.

As far as audio elements go, Battle: Los Angeles is again just…well, average. The soundtrack features popular hits such as Tupac’s California Love. Other songs are there to make the audience feel the correct emotions at the correct times. Like I mentioned before, everything is done right in a technical sense; however, it feels as though it’s just going through the motions as opposed to actually striking a chord with the audience on a deeper level.

The DVD is jam-packed with extras, as all these films always are. The standard DVD comes with Behind the Battle, Aliens in LA, Preparing for Battle, and Creating L.A. in L.A. – basically, all the ‘making of’ extras you could hope for. However, the film also is available on Blu-ray and in a combo pack (DVD and Blu-ray). Purchasing the Blu-ray will not only allow you to gain more features (Directing the Battle, Boot Camp, The Freeway Battle and Command Control), but it’s probably worth the extra money to see the film the way it was meant to be seen.

Battle: Los Angeles is nothing special – in fact, it feels like a draft proposal for what the film was actually going to be. If you have a palette for poignant narratives and avant-garde films, then give this a miss. With that being said, if you’re looking to kill two hours with some mindless action and like aliens, then pick up Battle: Los Angeles because it is absolutely perfect for you.