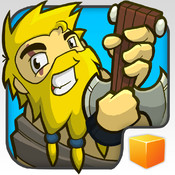 In Bardbarian, players control Brad the Barbarian as he decides to trade his battle axe for a lute (which for some reason sounds like an electric guitar) and decides to use music to defend his town. This unique tower defence title has a huge bullet hell/shoot ’em up influence to it, creating a unique adrenaline filled experience. Filled with creativity, Bardbarian is a fun, fresh action title that’s way more fun than it looks and easy to recommend for fans of tower defence & shoot ’em up games. 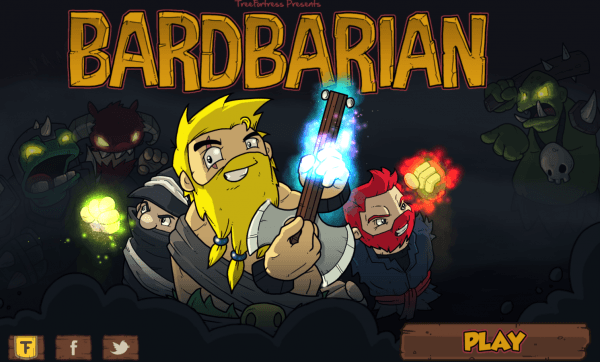 Many mobile titles that try unique attempts at mashing genres often fail, so it’s fantastic to see a game like Bardbarian take a leap of faith and comfortably land a successful mix. The idea is basically to take your typical tower defence title, but make the towers soldiers who follow you around as you defend the town against waves of enemies. Your character Brad does not fight, but rather inspires the combatants to by playing guitar riffs (I’m calling it a guitar because it sounds like one) that improves certain stats, which is the game’s form of casting spells. Players choose these songs with a touch of a finger, as well as manoeuvre Brad around the battlefield with the soldiers following. The waves of enemies run towards to the town shooting and your soldiers also shoot automatically as they follow. This leaves the player to play songs and dodge the enemies’ projectiles, giving it a very side scrolling shooter vibe. It all feels very natural and is very pick-up-and-play with what seems to have pretty much no learning curve at all, it just works. While a survival mode is present and an endless mode to be available soon, the main focus is on the campaign which involves 4 levels and 21 long waves of enemies. These levels are broken up as parts of a particular night, and can be played consecutively in a single game, or once unlocking them you can skip ahead although it’s not recommended. From start to finish it’ll take about an hour, but you won’t be able to do this on your first try. 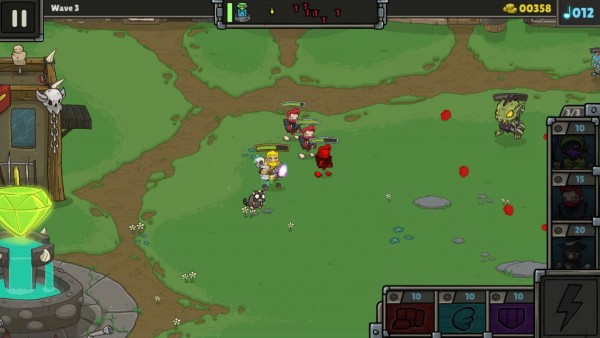 Like most games that involve in app purchasing, Bardbarian is all about grinding. Each level ends on a tough boss battle, and each has harder and harder enemies. Thankfully, earning currency is easy and there are plenty of upgrades which feel rewarding. That’s the beauty behind Bardbarian, everything you purchases matters. Unlike many titles these days that just increase a small stat, upgrades in Bardbarian dramatically effects gameplay and are also rather creative. The player feels rewarded for upgrading and encourages them to keep playing as the more you upgrade, the more fun the game becomes. While in app purchasing is present, it isn’t required as the game is more than fair when it comes to upgrades with affordable prices and currency easily earned. Many freemium games could learn a thing or two from Bardbarian in this aspect. 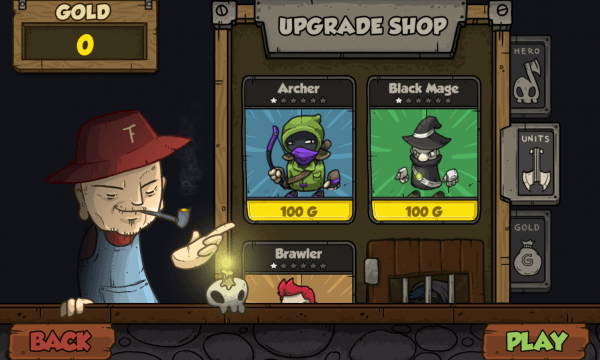 Bardbarian features hand drawn artwork that is filled with charm and character. The animation on the other hand can be a little wonky at times but it’s easily forgivable. The soundtrack comes from musical artist Maximum Satan, who sounds exactly as metal as their name sounds. Filled with distorted guitar riffs and drums with double kick, the soundtrack to Bardbarian is pretty awesome. What’s nice to see is that while the game has a clear metal influence, the gimmick is not milked dry which is noble of Tree Fortress, as I figured they’d want to try to appeal of fans like Metalocalypse or Brutal Legend a little more. Regardless, audio is awesome. However, it doesn’t loop perfectly which can be slightly annoying, but it’s not a massive deal. 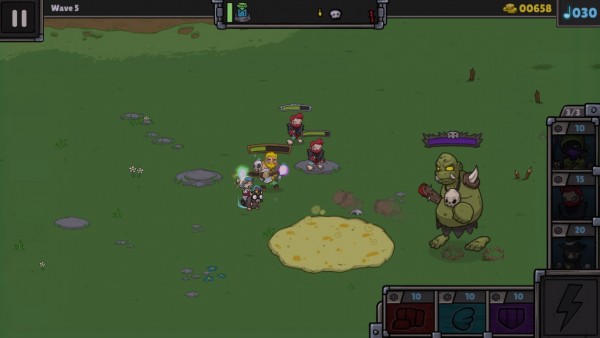 Bardbarian is the most addictive mobile title I’ve reviewed in a very long time. The concept is a creative blend of genres that feels natural, upgrades feel rewarding and powerful, in app purchasing doesn’t feel forced, a rocking soundtrack and everything is filled with character. Bardbarian is easy to recommend, blast to play and I’m glad this review is over because now I can go back to playing it!