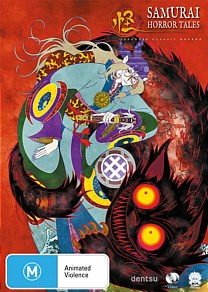 Samurai Horror Tales is a collection of three stories that although are distinct, yet still have a great deal of underlying consistency in their demeanor and narration style. Two of these are based on old Japanese plays, namely the first two stories: Yotsuya Ghost Story and Goddess of the Dark Tower. The third story is an original developed for this anime, titled Goblin Cat, which would subsequently spawn its own spin-off series that was recently picked up for localization.

Each of these stories is spread across 3-4 episodes each, presented as separate volumes that together make up the Samurai Horror Tales. It’s an interesting project, especially since it features anime interpretations of two well-known and renowned Japanese theatrical productions. The main star of the series however, can be seen in the promotional materials and even on the packaging of the release itself, the original story Goblin Cat.

Individually these stories are meaningful, but the execution leaves much to be desired, and also the realization that not all stories, as compelling as they may have been during their time, have timeless appeal. 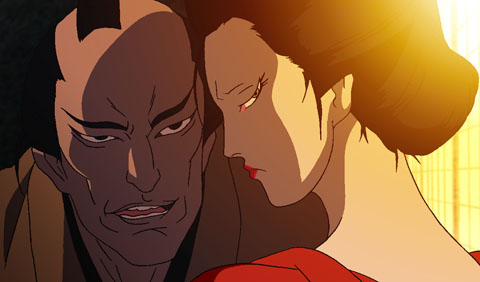 Yotsuya Ghost Story kicks off this collection by retelling a very popular and well known Japanese ghost tale that was adapted into a play during the 18th century, while it provides a run of the mill anime adaptation, it also breaks the fourth wall in a rather peculiar fashion by having the original writer of the play, recreated as an anime character, explain the process and inspiration that went into writing this play as well as serve as the narrator.  It feel s very odd to have that element thrown in, especially when you see him provide random trivia. It somewhat dampens the impact of the actual play itself, almost feels like watching a documentary of it rather than witnessing a proper self-contained story.

The story of Yotsuya itself revolves mainly around love and betrayal, mixed with supernatural psychological elements. What’s interesting about it is that while it is essentially meant to be a ghost story, what it really does is delve into the human psyche of guilt and remorse. You have the main antagonist seemingly ‘haunted’ by the ghosts of his sinful past, but what it really does is portray the immense guilt and fear in his heart, so immense that it sends him into a psychotic state of paranoia and delusion. You won’t realize this the first time you watch it, but for a ghost story it sure has a funny way to tell you that ghosts may just all be ‘in your head’. It’s an interesting story for sure, but the narration style and character development feels rather rushed and campy by today’s standards. However it is frightening, especially if you are superstitious or are afraid of rats…

Goddess of the Dark Tower is a classic forbidden love story, and oddly enough, while Yotsuya portrays the dire consequences of betraying your spouse and your loved one for selfish reasons, Goddess of the Dark Tower seemingly tries to justify the very same thing. It’s a tale of a human and a god caught up in a love that is both forbidden and highly problematic. How far is it worth going for love? Is worth sacrificing everything and letting everyone down for the sake of love? Is blind love worth chasing at all? These are some of the questions that this story attempts to answer. Whether you agree with what happens in this story or not, it still offers a rather grey portrayal of love. Still, it’s hard not to criticize just how haphazardly this ‘love’ is developed in the story, it’s an old fashioned love at first sight sort of thing that can be found in numerous fairy tales. It honestly feels stupidly silly and misinformed when you witness it, but I suppose things were simpler back in the old days (maybe). 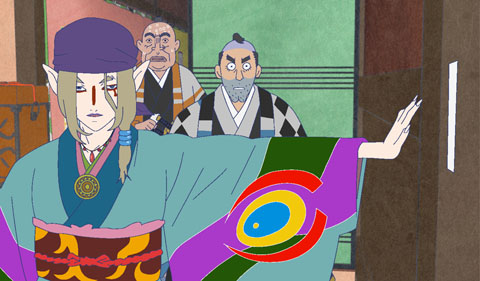 Finally, Goblin Cat offers perhaps the deepest and darkest horror tale of all, not surprising considering that this is an original story developed by the creators of the anime and so it certainly feels a lot more fleshed out and layered than the other two relatively primitive stories that are based on century old plays. Here you have a wandering cat-like medicine peddler, who also happens to be demon hunter, caught up in a dark and frightening family scandal. This chance encounter with the seemingly normal family suddenly gives rise to a vicious adversary in the form of an evil spirit, a spirit that is looking to kill the entire family that is now forcibly trapped in their home. The wandering peddler, oblivious to the underlying truth, puts on his detective hat to uncover a truth that will hopefully put the dark evil spirit to rest and save the family from a gruesome death. This story starts off slow and feels like a typical spirit exorcism tale, but in the final act when the truth is finally revealed, you witness a hauntingly gripping and a painfully depressing portrayal of the unlimited malice of the human heart. It makes you realize all the ghosts and supernatural beings that people so superstitiously fear are really just manifestations of their own inner demons.

All three stories are narrated in a rather quick manner, jumping over necessary narration and plot layers just to get the underlying morale across, similar to a Brothers Grimm folk tale. This kind of hasty storytelling may not be to the liking of the contemporary anime viewer, and the shallow dialogue and seemingly empty characters don’t help either. 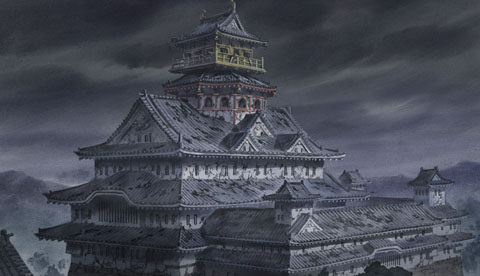 Visually, Samurai Horror Tales is an awful show to look at. The animation is atrociously sloppy and lazy, so much so that you can easily find superior quality in anime produced during the 80s even. It feels lazily drawn and animated, with aesthetically weak and bland character designs that sport some truly awful facial animation. Out of all the shows, Goblin Cat probably looks the best with its cool paper canvas aesthetic, but overall it just feels like watching a cheap fan production made for Youtube.

Musically the show is characterized by consistent Japanese folk music which sounds pretty good for the most part. The anime has this rather obscure opening theme that’s basically hard rap music fused with folk music instrumentals. The ending theme is a generic ballad of sorts that is consistent with the general folk music style.

The release contains the original Japanese dub, which actually sounds pretty weak as it sounds like the voice actors were just reading off the script, sorely lacking in emotion and flair. It contains the English dub too, which sounds far worse as it is truly mediocre and it will surely remind you of the atrocious English dubs from yesteryear. 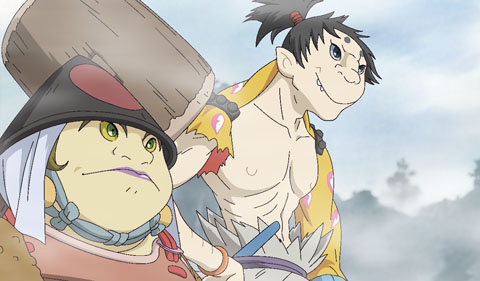 Outside of the main episodes, this collection features no extras whatsoever.

Samurai Horror Tales presents two classic Japanese plays, and an original story, in a truly unmemorable and sloppy fashion. The execution is simply lazy with hardly anything that stands out as good. In terms of visuals and production, it’s as weak as they come, and even the actual story delivery, dialogue, and voice acting does very little to make things compelling. The stories themselves are fine, but their delivery and execution leaves a lot to be desired. A weak anime series released with hardly any extra content, this is a release that anime viewers can easily live without. For that price-point  you could do a lot better, like the amazing content-heavy release of the excellent UnGo series.