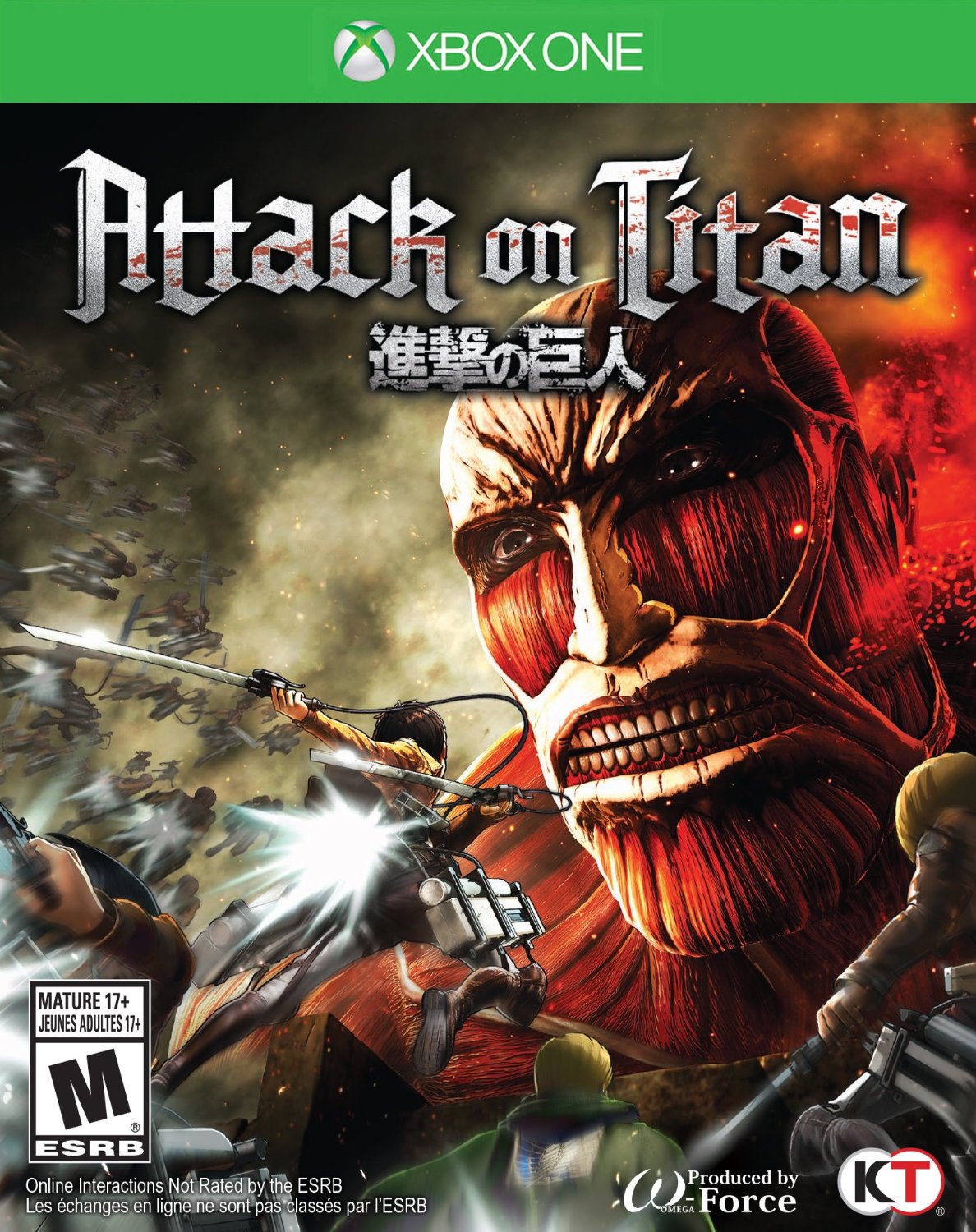 Three years ago when the Attack on Titan anime adaptation aired in Japan the popularity of the series exploded overnight. While many series of this type tend to lose some of their followers as the series progresses, the fanbase has remained quite adamant about seeing the series continue even after a couple of second season delays and, for a while, slow moving source material. In fact, Attack on Titan has now been given its second game and now that Koei Tecmo has released the title in the West, is it worth picking up?

It is worth noting that since this game covers all of the events of the anime, including some gameplay elements that will spoil certain reveals, that if you haven’t seen or read the series up to the end of the anime then you should do so before starting the game. 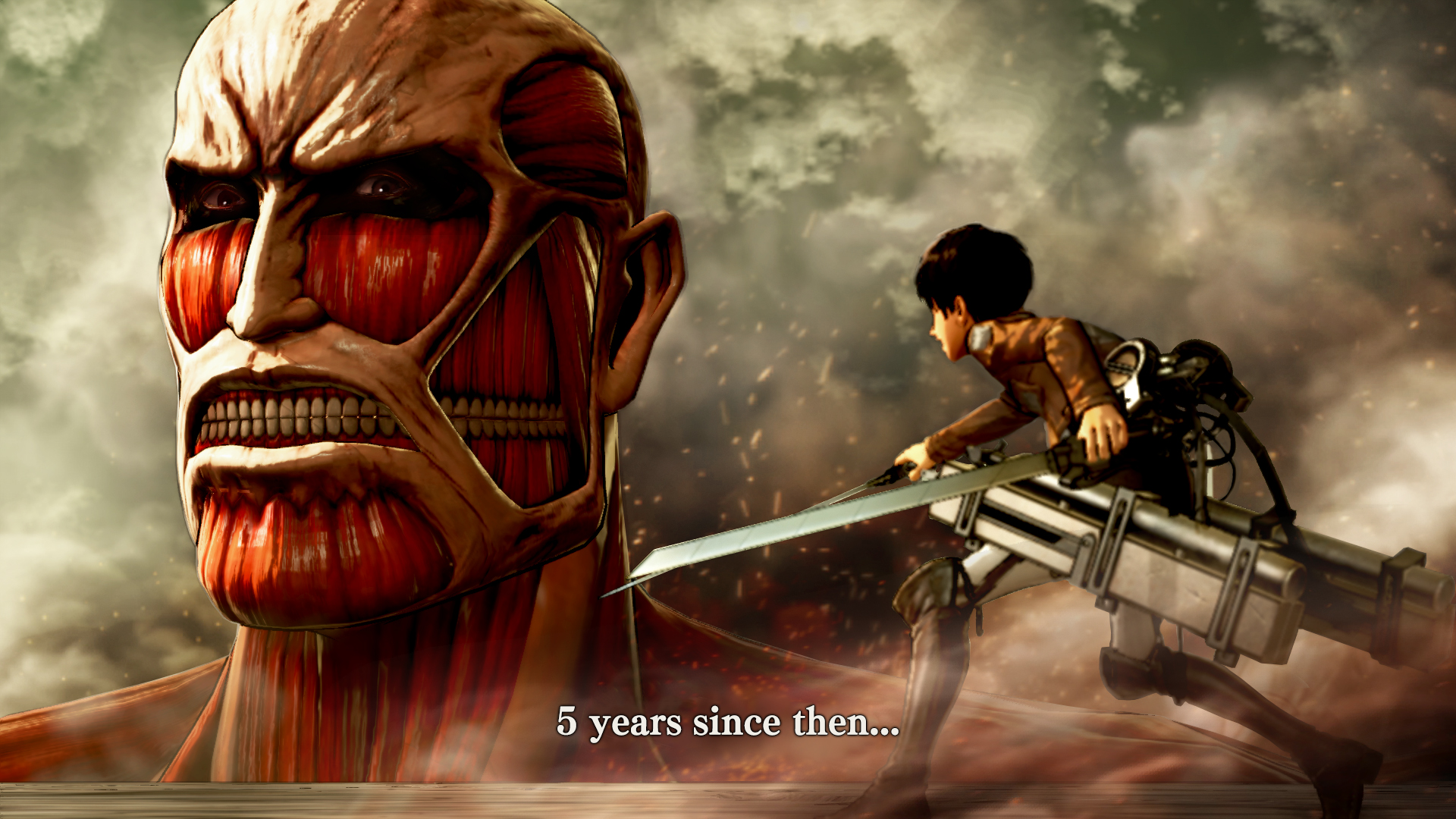 Humanity has lived behind three immense walls that were constructed long before anyone can remember in an effort to keep highly dangerous manlike beings known as Titans from invading the last bastions of humanity. For well over a hundred years very few cared about what happened outside the walls until one day humanity was given a terrible reminder of the dangers existing in their world. With the appearance of a colossal Titan that could see over the walls, the outermost wall was destroyed with one kick and the rest of the Titans, ranging from 2M tall to over 15M began pouring through and eating anyone in sight.

With very little preparation and evacuation methods, hundreds of thousands of people died when the wall fell and forced humanity to retreat behind the smaller area behind the second wall. Years have passed since the outermost wall fell to the Titans and now Eren, MIkasa, and Armin have undergone the training in the 104th Cadet Corps to learn everything they can about slaying Titans with Eren’s main goal being that of revenge while the rest fight for survival and the chance of retaking back the lands they once called home. 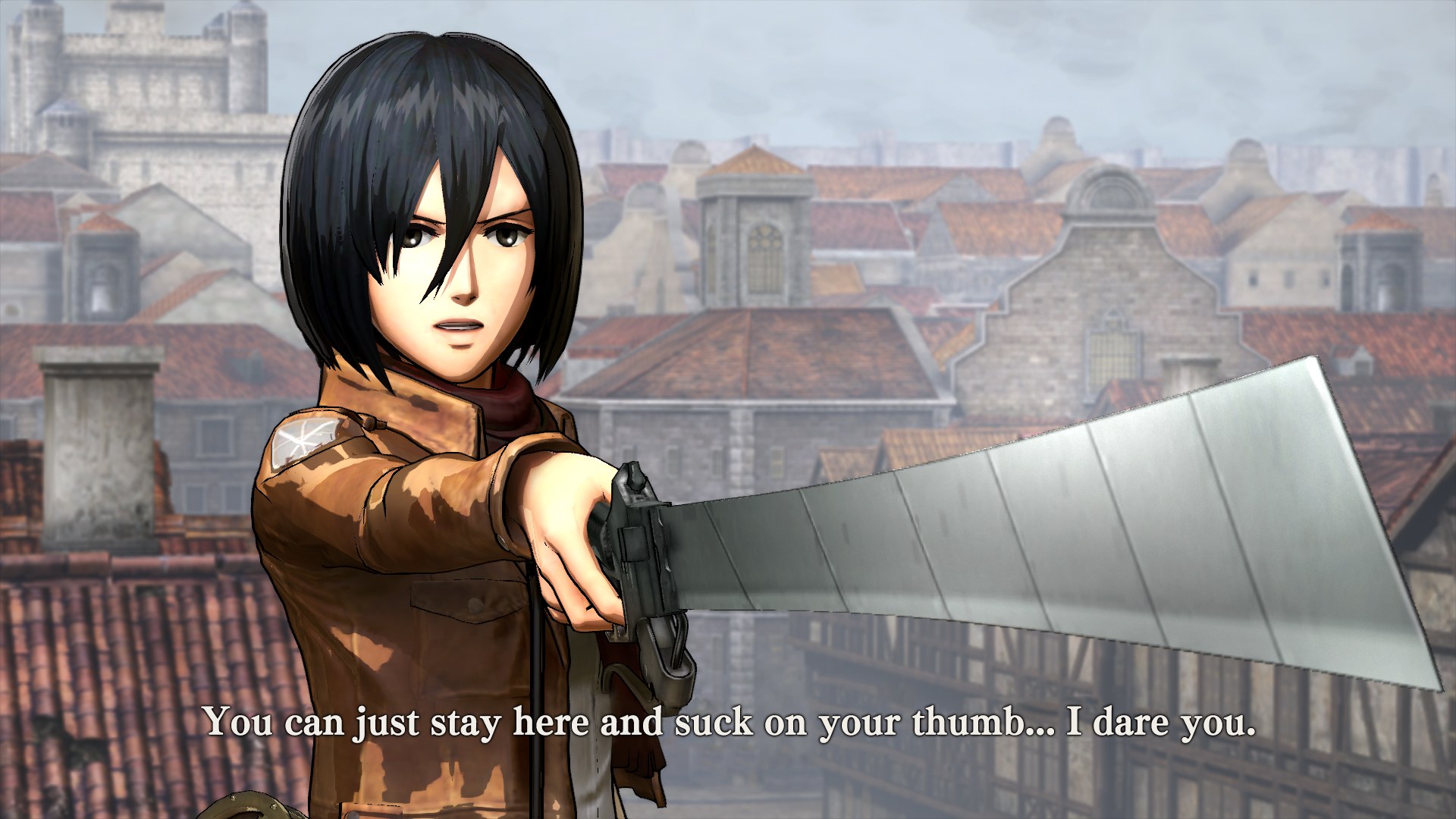 For the most part Attack on Titan does a decent job highlighting some of the most important scenes of the game so fans will definitely appreciate these scenes being recreated but it is also worth noting that for newcomers this is a poor way to experience the story. I say this because while the “Attack Mode” that serves as the story does cover the basics and some of the OVAs that follow Levi’s group, it also glosses over many important events and story details that take place between the larger confrontations. Along those same lines the story mode comes to an abrupt end so those looking for something a bit more substantial to chew on will be out of luck outside of some extra unlockable missions compared to the source material.

Regardless of whether the player chooses to play the “Attack” story mode or side-mission/multiplayer “Expedition” mode they are given a  chance to prepare before entering into actual combat. This preparation stage allows players to run around with their character and talk to other NPCs as well as purchase new equipment, refine their equipment, buy materials, and take on various requests from named characters. 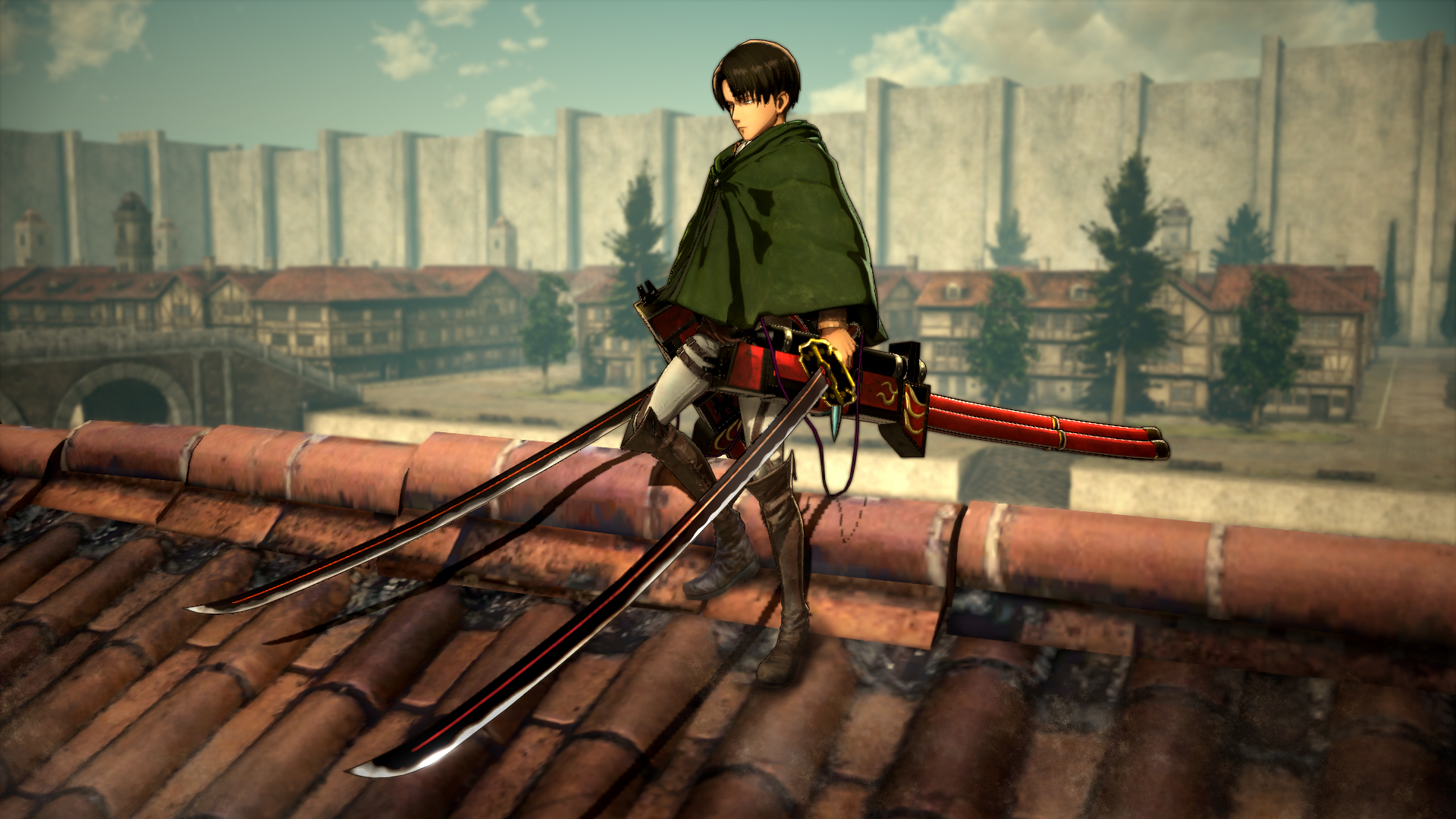 The main tools players will have to worry about keeping upgraded come in the form of their blades, scabbards, and ODM, all of which come in different types that can be unlocked and further improved to increase various stats such as damage dealt, durability, amount of gas and acceleration rate, anchor strength and more. It is also worth noting that some stages place the character on the back of a horse so various horses can also be equipped with higher speed and stamina ratings. It is worth noting that since all equipment is carried over between Attack and Expedition modes and between characters that keeping yourself upgraded is essential.

Once you actually are in the field players will find that Omega Force has managed to truly embrace the style of combat in Attack on Titan. Every Titan comes in various forms such as small, medium, and large with certain ones being able to defend themselves or act erratically and players must use their movement gears to maneuver around them in order to slice at the nape of their necks to deal killing blows. Various tactics such as slicing off a leg or an arm are useful to slow down a target and often reward the player with a special material that can be used for crafting but some Titans do require their arms be removed before aiming for the nape or else the damage dealt will be heavily reduced. 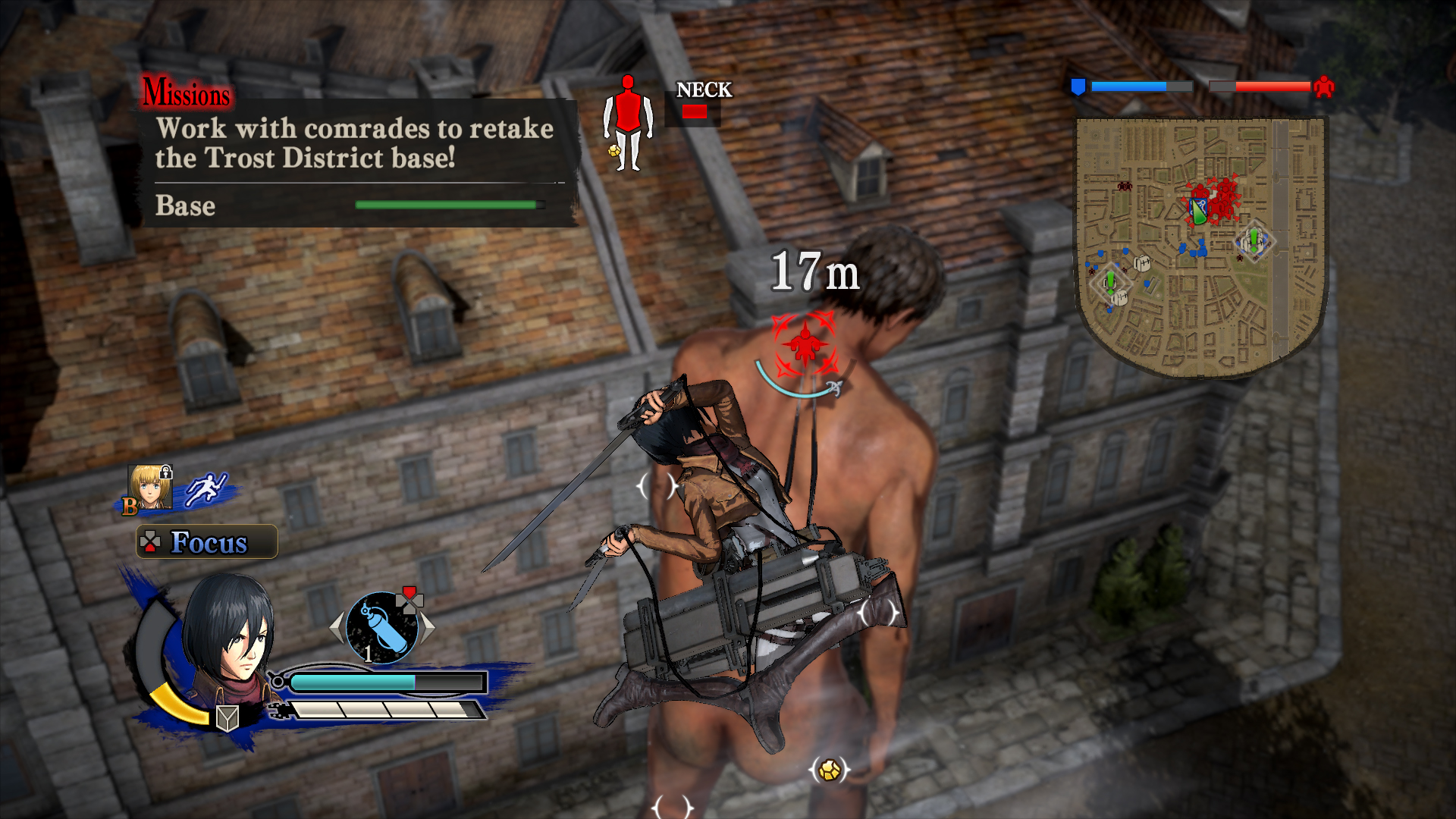 Fast paced movement and strikes are essential to win against more difficult Titans as they can and will regenerate their limbs and even slowly recover health of moderately damaged areas. Although it can be rather difficult to get a grasp of the controls to begin with as the way the ODM controls is a bit unusual to start with, players are worked through the process of learning how to target specific body parts, swap anchors between points, boosting, and more in an effort to teach them the strengths and limitations of their equipment, such as how they cannot be used in areas where there is nothing to grapple to and how the amount of damage dealt to a Titan when attacking is based on speed and targeting.

Titans also serve as a very dangerous threat in this game as one would expect. If players aren’t careful they may find themselves whiffing on a hit only to be grabbed by a Titan and forced to mash the attack button to escape or die. In fact, simply getting smacked or struck can be enough to kill a character though in these modes it is possible to dodge out of the way through “focus time” though this meter is limited in nature and, unless healed, can leave the player facing a head on instant kill. 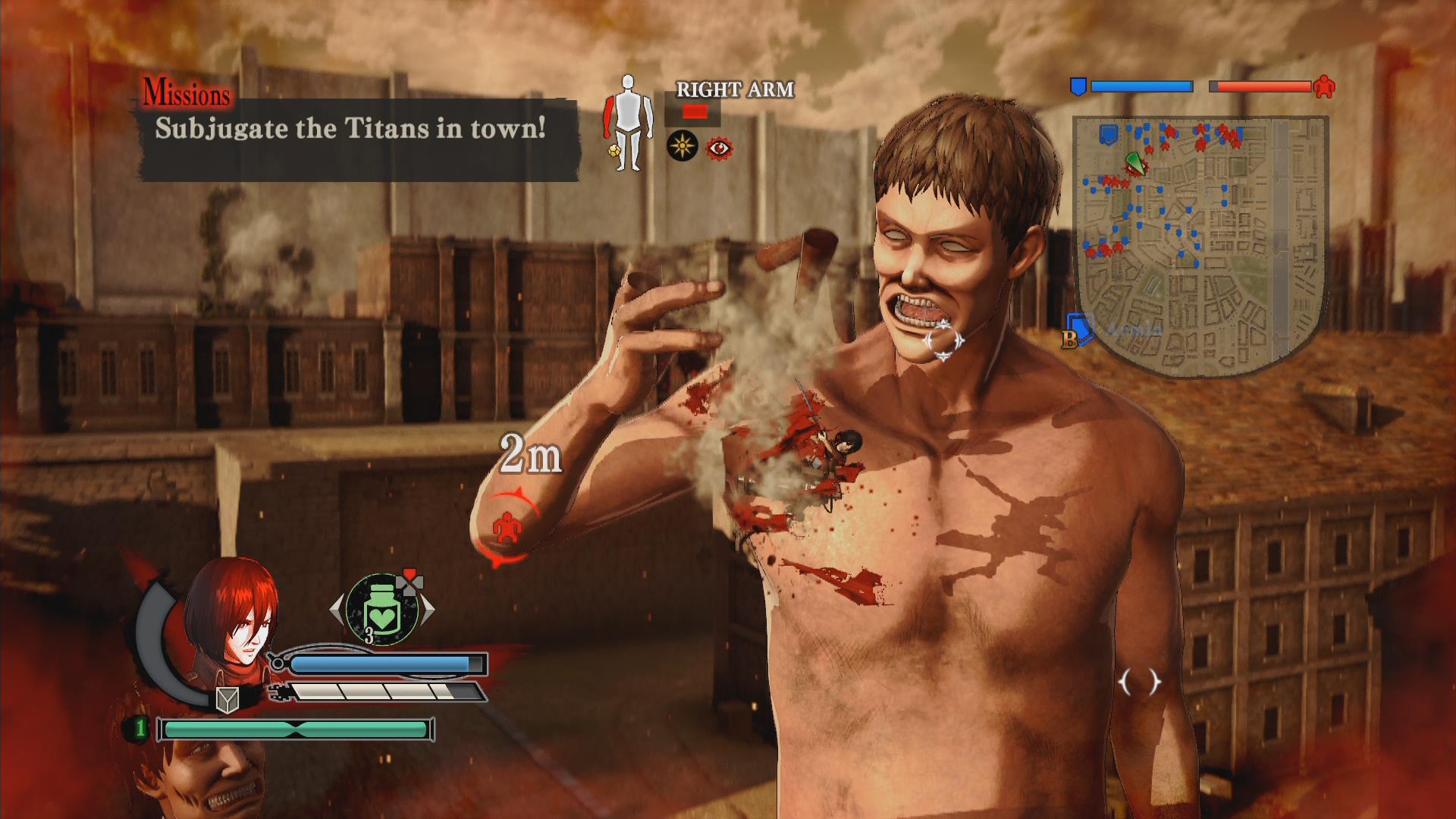 Allied characters in the game also regularly are killed and eaten by Titans though named characters are only displayed as defeated and will leave the field of battle for story sake. This means if the player is running low on blade or fuel refills and a character that otherwise might be able to resupply them is killed, they will be forced to either head elsewhere on the map or hope to loot something useful from a fallen comrade that occasionally appears from a Titan’s vanishing corpse. Speaking of allies, players can recruit common soldiers to join them or complete various side-missions that appear as green smoke signals to recruit named characters to their party that can then be given various orders to Focus, Guard, and Fan Out.

It is worth noting that although the game does offer an eventual ten playable characters that it is rather surprising that certain characters were left out. This means characters such as Ymir, Reiner, Annie, and a number of other named characters that appear and are still alive throughout the story told in the game and are featured as allies, are not playable in favor of Erwin, Hange, and Connie.  Along those same lines players may find that, even when delving into the Expedition mode that allows them to fight online with other characters to take down Titans that the gameplay can become a bit repetitive in nature despite how fun it can be to zip around and eliminate as many Titans as possible.

Now as for a certain spoiler area, it is worth noting that after a certain period of time in the game that Eren unlocks the ability to transform into his Titan form. Unfortunately these Titan form battles are rather simplistic in nature primarily thanks to the floating feel of the melee combat. Any basic punch attacks feel like they have no weight at all to them when fighting against any type of normal Titan while fights against certain special ones rely on simple dashing affairs until the opponent is stunned enough to pull off a powerful attack leaving these battles that should feel far more intense in nature rather underwhelming overall.

Throughout the game players will be able to witness a large number of story events that are skillfully recreated with highly detailed looking character models and Titans similar to those seen in these scenes. The cel-shaded art style fits the anime theme very well here and thanks to this fans of the anime as well as the original manga material will be quite pleased. Unfortunately the same level of detail cannot be said about most of the environments in the game and the very small amount that are actually playable. While buildings crumble with satisfaction, the amount of detail in most areas is extremely dull looking and there are many times in combat that a Titan will flounder about or even clip inside of a building. 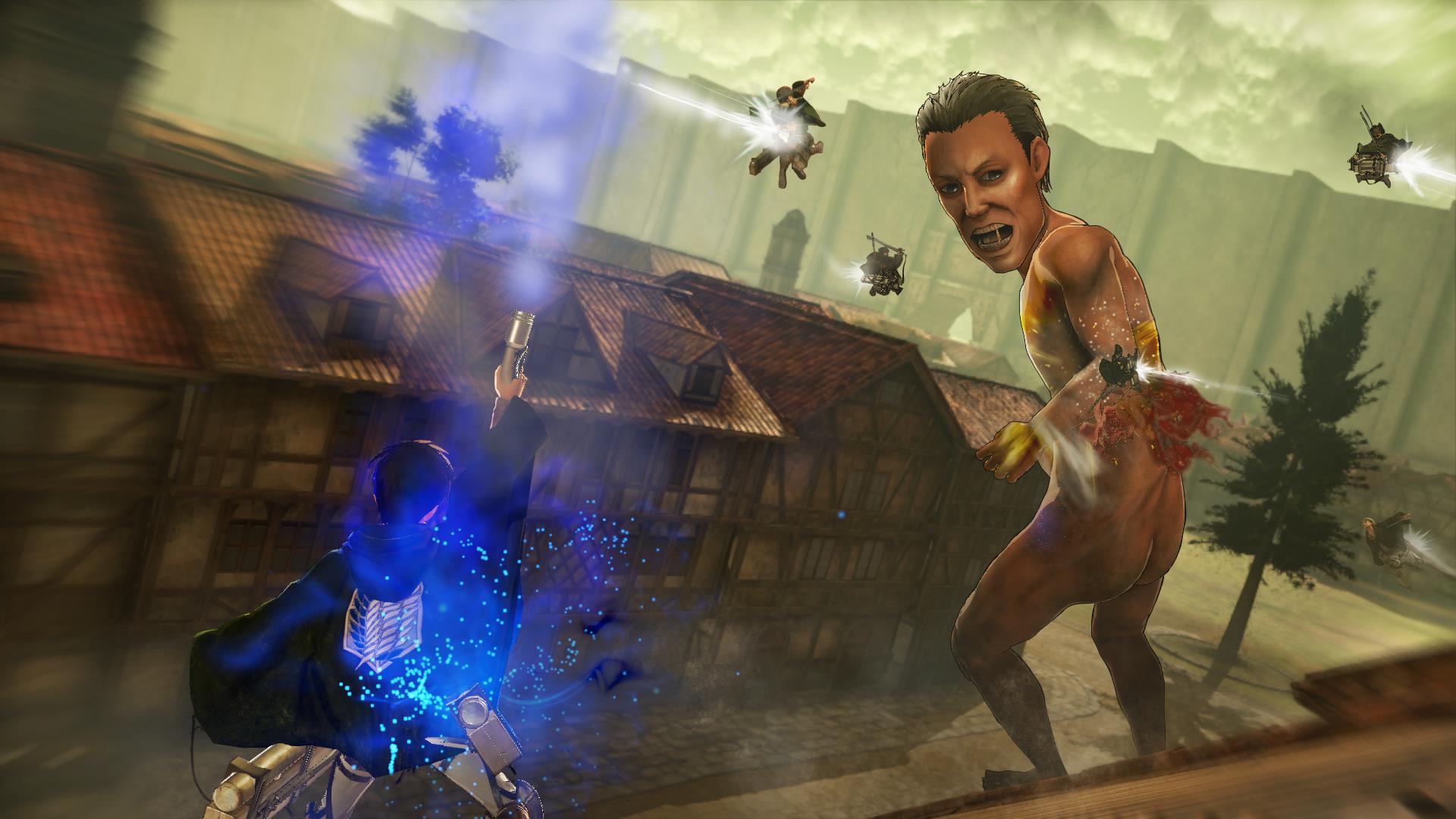 It is worth noting that Koei Tecmo did not opt to provide an English voice track for the release of Attack on Titan but thankfully the Japanese voice actors have all reprised their roles from the anime series which is a great touch for fans. The soundtrack on the other hand does unfortunately miss out on some of the signature tracks contained in the series but does its best to mimic them and often helps deliver a solid fast paced tune to kill Titans to.

Attack on Titan manages to embrace the fast paced combat and dangerous drama of the series perfectly. While death is generally due to player error in most cases, fighting against Titans feels dangerous and pulling off perfect kills feels like a real accomplishment at times. With some situations forcing the player to carefully swing around a Titan while dodging another’s grasping arm all while trying not to lose your anchoring by colliding with the environment, the battles found in Attack on Titan are incredibly exhilarating and make the occasionally flawed experience feel well worth it.

Attack on Titan well-honed grasp on the maneuvering and combat style create an incredibly exhilarating experience that is great in small doses but can feel a bit repetitive once you clear the relatively short story.
8