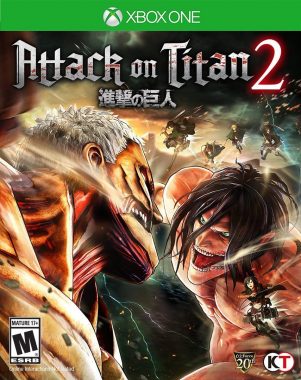 Some may say that the Attack on Titan craze has severely diminished over the four years it took the franchise to see its second anime season but the plethora of side-stories, spin-offs, and of course the main storyline being continued in the manga, many fans have stuck around and for these fans Koei Tecmo has brought over Attack on Titan 2. Does this second entry from Omega Force warrant a purchase?

The storyline for Attack on Titan takes place in a world where humanity lives behind extremely large walls that serve to protect them from gigantic monstrosities known as Titans. These human-like creatures are known for only one thing, mindlessly eating any human they come across and generally ignoring anything else and while humanity has managed to live in peace for years, this all comes to an end when a colossal Titan smashes through the outermost wall and brings humanity to the brink of extinction once again. 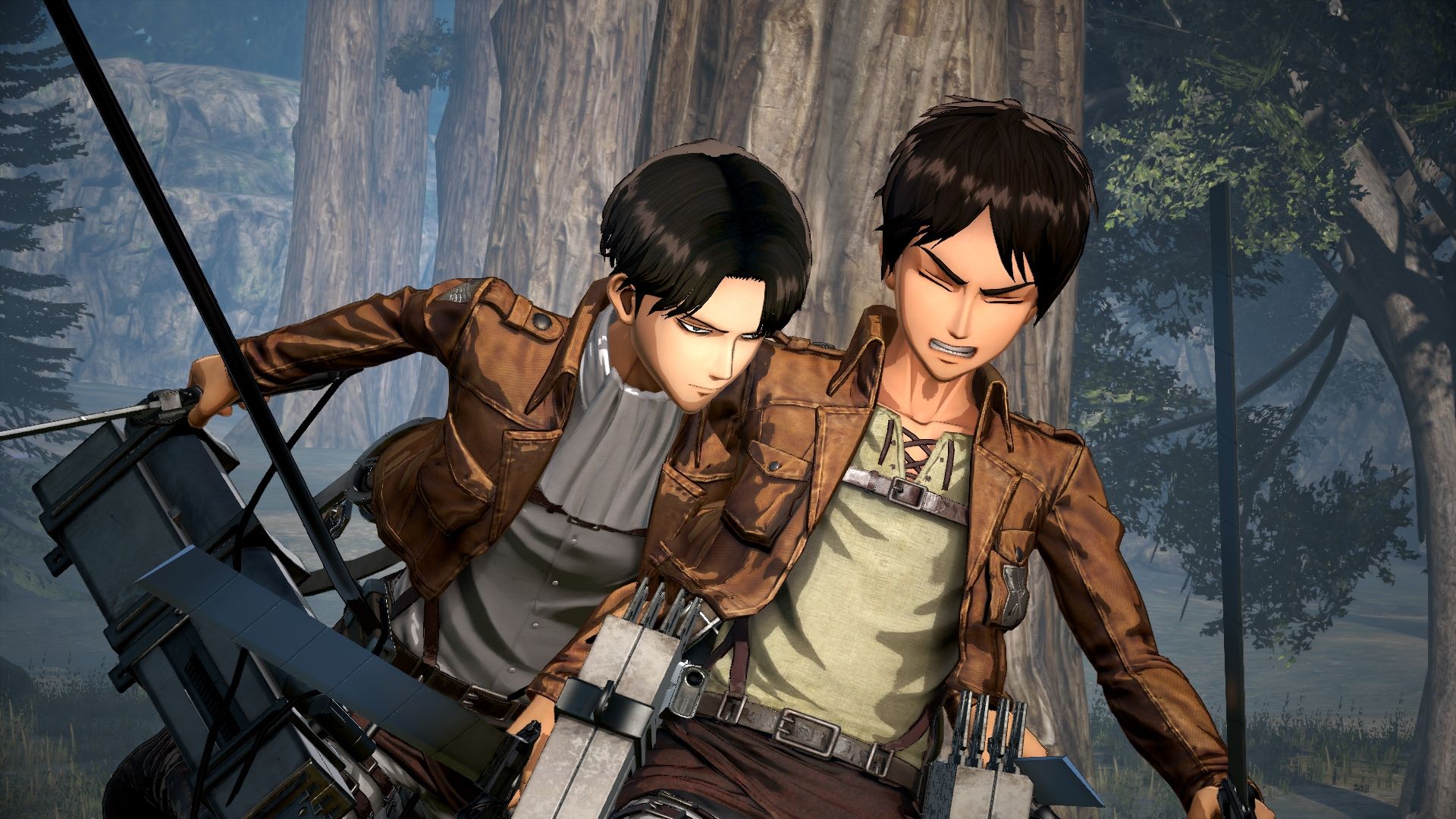 The fall of this bastion of humanity forces humanity to flee further within the limited space of the walls and results in the death of Eren Yeager’s mother as well as the protagonist’s entire family. I say protagonist because unlike the first game, players will instead be taking on the role of an unnamed soldier (that is named by the player) who is called “Our Man” by the narrator. This character serves as a way for players to experience the storyline from the main series through a separate set of eyes that witnesses some events never before shown as well as a chance to bond with characters that Eren generally wouldn’t have interacted with.

For those who have never experienced Attack on Titan the game does a great job of walking you through the whole entry point to the series by covering numerous elements that are explained throughout the first season and this new viewpoint also allows fans of the series to at least experience things through a fresh set of eyes. That being said, the story only continues to the point where Attack on Titan’s second season comes to an end meaning the actual content that takes place after what happens in the first game can be a bit disappointing to some even if the fights on offer here and the major revelations does offer plenty of new lore for those who have only been playing the games or watching the anime so far.

As mentioned before, one thing that players can do in this second game happens to be speaking with numerous named characters throughout both seasons. “Our Man” as they are called can become close friends with a large number of characters by talking with them between missions, selecting various dialogue choices, giving them presents, and fighting alongside them in any battle they appear in. As you grow friendly with these characters you can learn new pieces of their backstory and see various little scenes that fans of the franchise will appreciate especially since some give us a new look at characters often relegated to background status as well as some new information for others who were never given much detail. 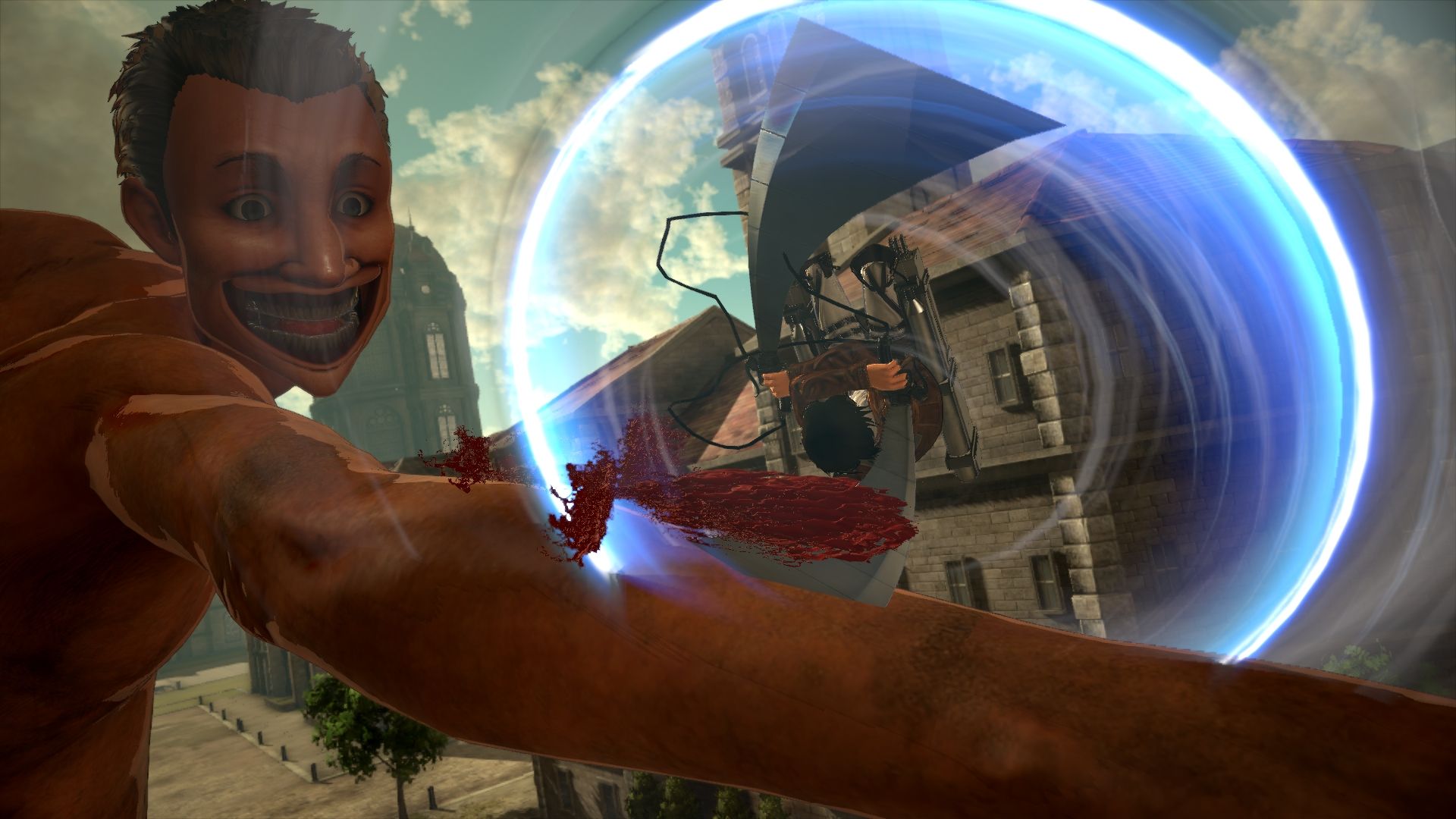 The first thing that players will end up doing in the game is create and name their avatar who is called “Our Man” from that point on in the story. The character creation system is quite in-depth as players can create a male or female character of various anime-style designs with a wide array of features to choose from. In fact, players can even choose to dye their clothing different colors to make sure they stand out from the rest of the characters in the game. If you tire of your appearance you can also change it after a certain point in the game’s story mode or any time in the “Another” mode.

After this point players will be run through the gambit of how to operate the game’s “Omni-Directional Gear” known more commonly as ODM that serves as the way players will navigate through most of the game. The control scheme here has changed little from the way it handled in the first game so newcomers are given plenty of time to learn the ropes while returning fans can dust off the cobwebs and get right back to slicing off Titan limbs and attacking their napes.

As before, players will navigate by swinging around using the ODM’s anchors and approach Titans that must be locked onto to engage. The movement in Attack on Titan 2 remains incredibly fluid with players feeling like they are truly moving at incredible speeds once they’ve begun to upgrade their gear. That being said moving around some tight spaces can still cause the player character to flail around a bit, making navigation around some buildings a bit troublesome. 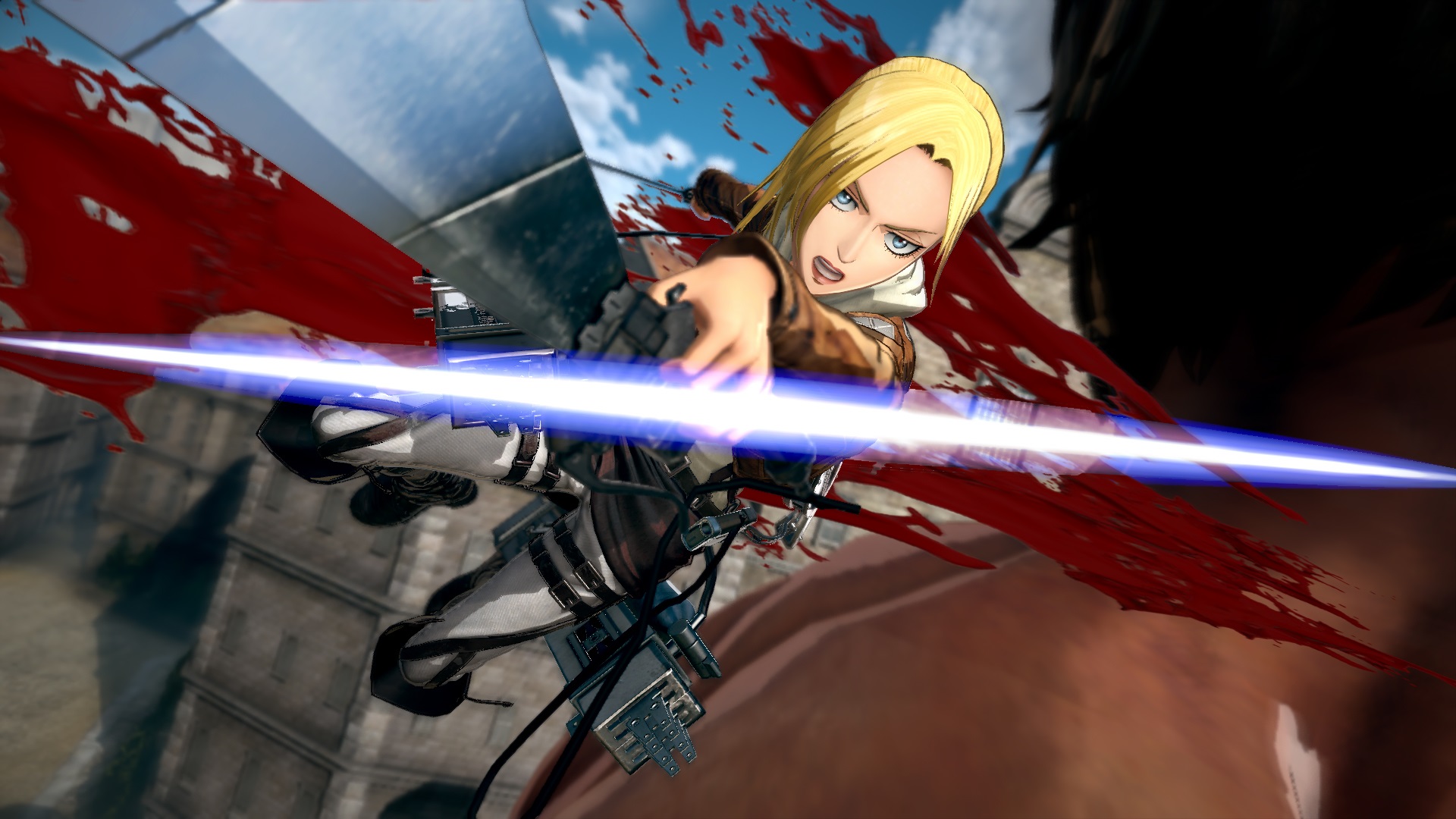 Once engaged you can target five different points on a Titan, their four limbs and the nape of their neck and when you latch onto a part you can opt to zoom around the monster to get a better angle and simply stop moving to zip towards your target, pressing Y to deliver a slicing blow. Damage dealt will vary depending on the angle of your attack, the speed you were coming in at, and of course whether you were actually targeting that part. It also will vary depending on whether or not your blades have been damaged to the point of being replaced.

Similar to the previous game blades and canisters (used to move around Titans and gain speed boosts while navigating) will run out over use and since players can only carry so many at a time you will need to replenish your stock after a period of time. Unlike the past game players can now resupply using bases scattered around the maps and even build bases yourself using flare guns in predetermined locations. These bases range from those that simply resupply all of the items you have equipped to mining for additional resources that will be awarded at the end of a fight alongside other rewards and used to upgrade gear, firing off automated cannon fire, and even serving as traps that will explode whenever a Titan attacks them.

Another added element to Attack on Titan 2 is the ability to use net guns that will allow the player to capture Titans. Many of these require a player to slice off the legs or all limbs of a Titan first but this does add an additional way to eliminate foes and also unlock special items when your Titan Research level is raised. One element added to this game does become rather tedious however and that is the fact that every level now ends with one or more “boss” Titans. Outside of a few rare battles these boss battles are simply large abnormal Titans that have bodies that are nearly impervious to attack unless you weaken them first by attacking the glowing green aura that often moves around their limbs. Since most of these Titans tend to be rather simple in nature, these fights boil down to being nothing more than a chore as you slash away at a health sponge that drags the gameplay to a halt from what is otherwise a fast paced and highly enjoyable experience. 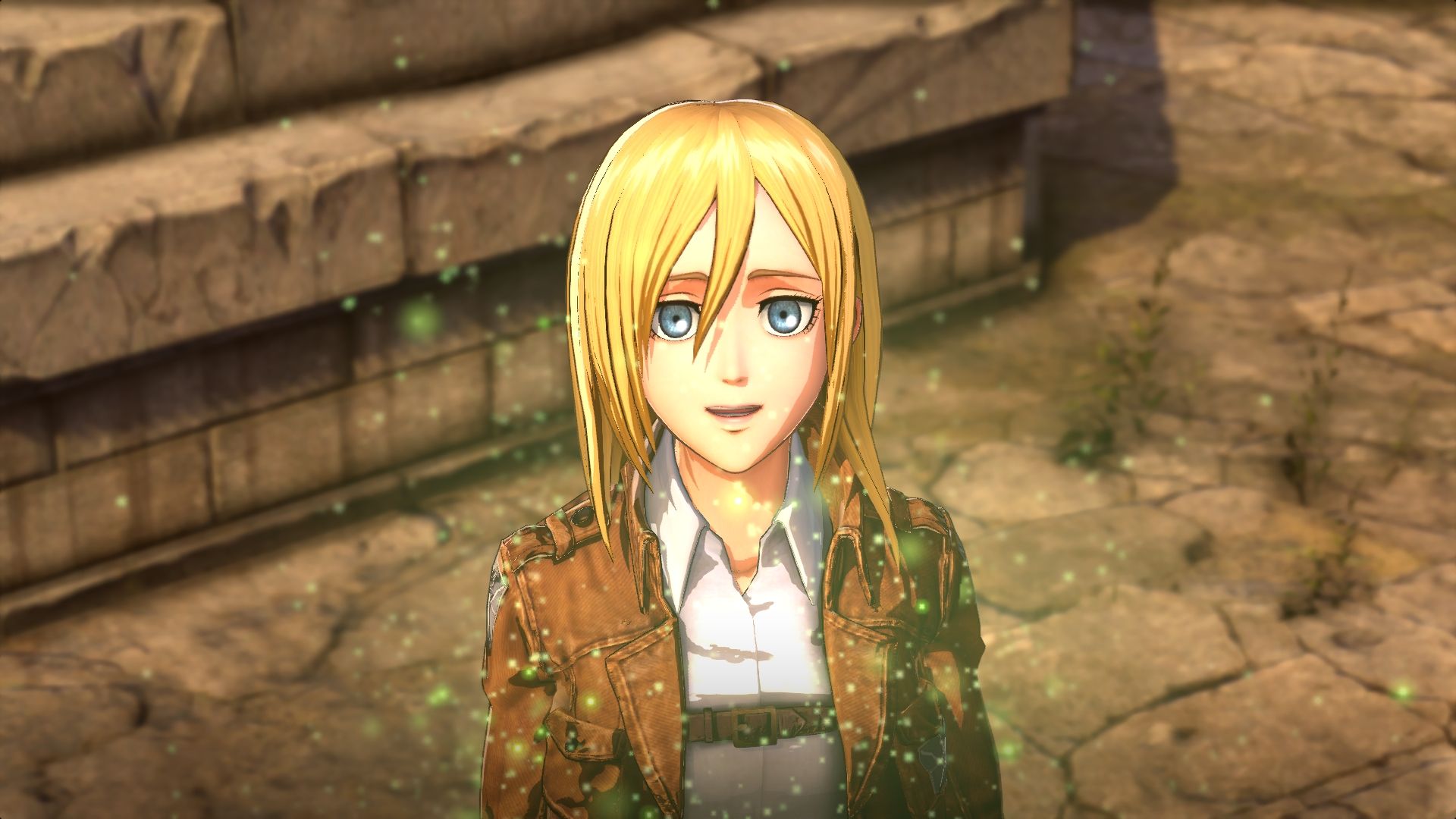 When you aren’t out in the field you will be in the “Daily Life” segments. Here players can walk around different parts of the cities and talk with a large number of named characters. As mentioned before players will receive various bonuses by becoming friends with all of these characters that are then equipped as skills that range from boosting stats to providing new skills and even offering additional rewards. Players can also opt to invite most characters with them on scouting missions that guarantees that the character will appear with you, giving a better chance to raise their friendship meter and make use of their ally skill. These skills will vary depending on character with some being able to call reinforcements, others healing the player or teaming up with them to deal a combo attack, and the majority simply attacking a foe with certain characters being able to perform cinematic eliminations.

The “Another” mode mentioned earlier allows players to take on the aforementioned Scout missions either as their character or as other characters that they unlock through the story. These missions can be played either offline or online with other players with online offering a variety of modes ranging from competitive annihilation mode that pits two teams against each other to eliminate the most Titans to cooperative ones that can unlock special materials used for crafting. 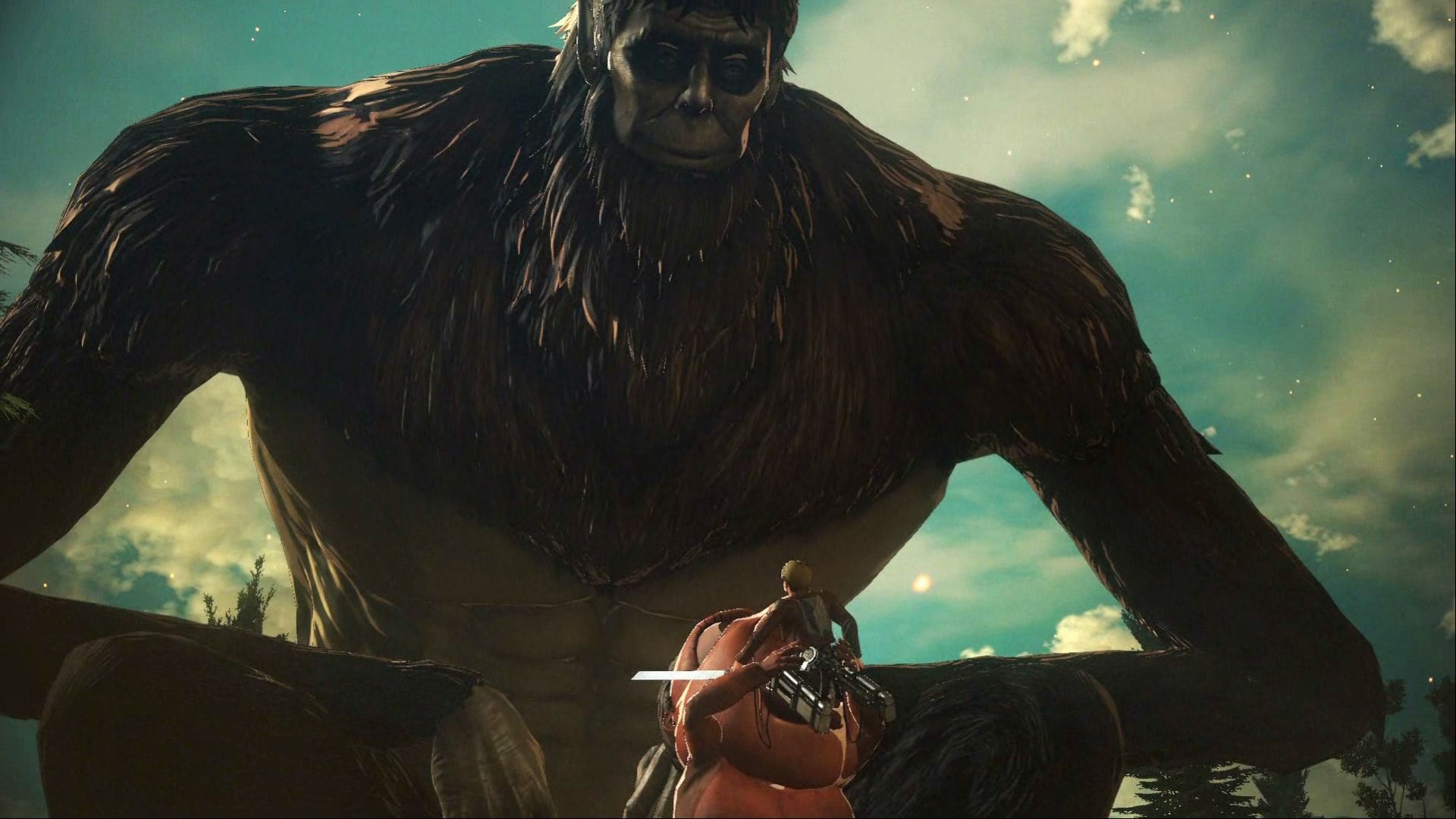 For the most part Attack on Titan 2 has only seen a small bump in graphics over its predecessor but that isn’t too much to be concerned about as the visuals match the aesthetic of the anime perfectly with the characters all fitting their designs quite nicely while a wide variety of creepy Titans are on display. It is worth noting that the blood level has also been increased quite a lot this time around as players will often find themselves slaying a Titan and bathing the entire area in sprays of its blood. The camera unfortunately has not been improved and the flailing nature of the Titans can often cause players to lose track of themselves or simply slice into a body part they weren’t aiming at simply because the camera has issues keeping up with the speed of the player’s movement and the flailing of a wounded Titan.

As far as the soundtrack goes, the background music is fairly standard for this entry in the series and doesn’t seem to have improved much over the previous entry. As for the voice acting, players will need to know that the game only features a Japanese voice track but all of the original voice actors have retained their role so most fans will still be pleased by their performances here. 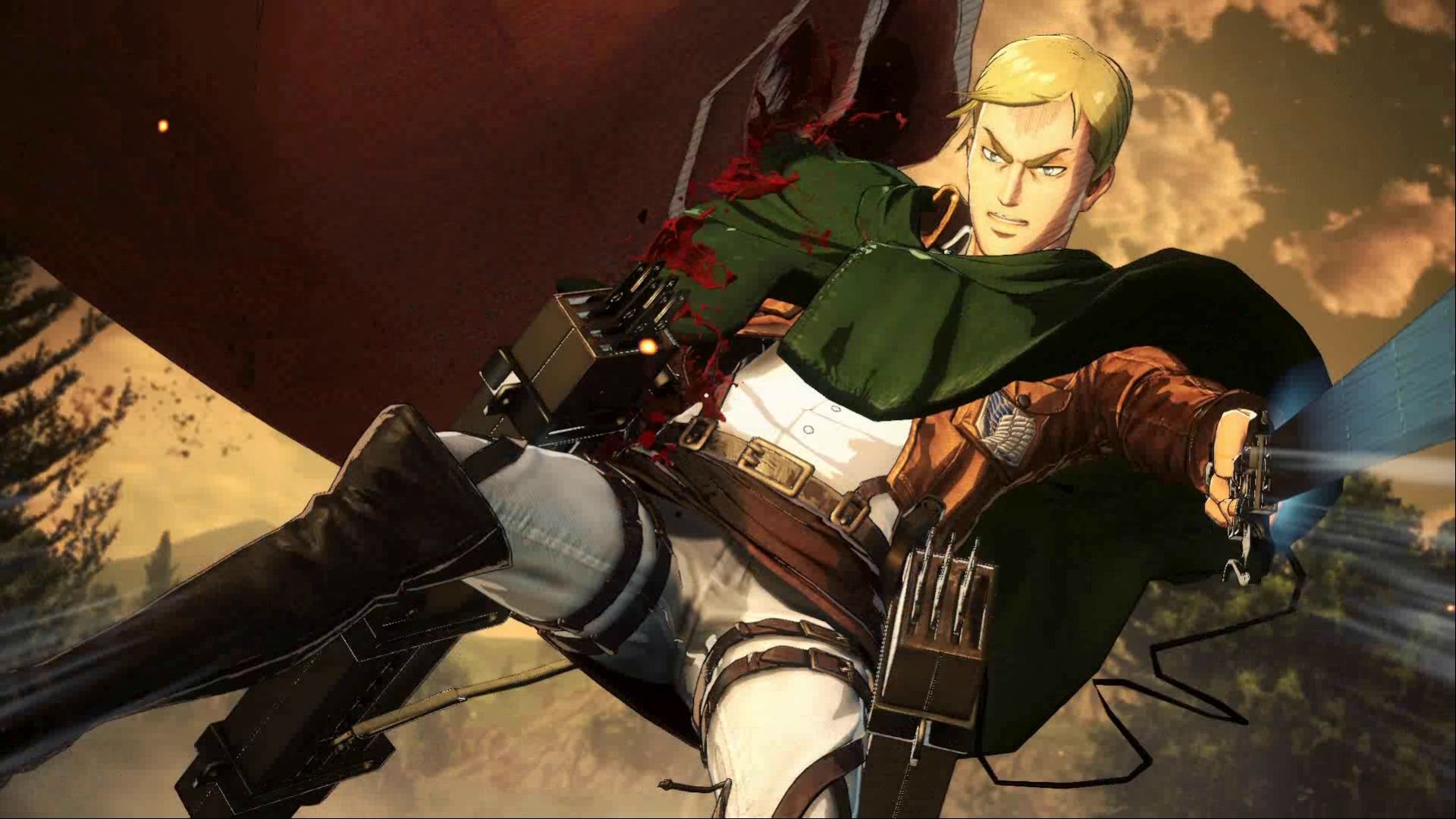 Although a large portion of Attack on Titan 2 spends its time retreading a well-known storyline, placing players in a third party role adds a fresh perspective on the story and a chance to experience friendships never thought of before. There are a number of improvements to the game’s standard formula as well as some new drawbacks but for the most part fans of the series will be pleased with Attack on Titan 2 while newcomers will find a solid and fast-paced action game with a unique story that is worth trying out.

Attack on Titan 2 may fix some of its previous issues while adding in some new problems but it still delivers a speedy action game with a solid storyline.
8