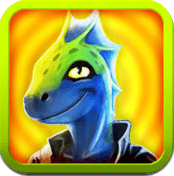 In the App store there is a huge amount of games similar to Astroplasm. There’s just something about bright colours, flashing lights and simple, classic games that app developers and publishers love. Maybe it’s that sense of nostalgia, maybe it’s the fact that apps are usually played by people with short attention spans, maybe it’s just that they’re fun. Either way, there are certainly plenty to speak of. So does Astroplasm set itself apart from the pack, or does it just fall in with the crowd?

The name Astroplasm doesn’t really give a lot away, so unless you actually read the description you’ll probably be surprised to see that it is a future version of air hockey with no plasm in sight. Oh and it’s set in an alien bar that looks like it’s a rip off of the Star Wars Cantina. But hey, alien air hockey, why not? 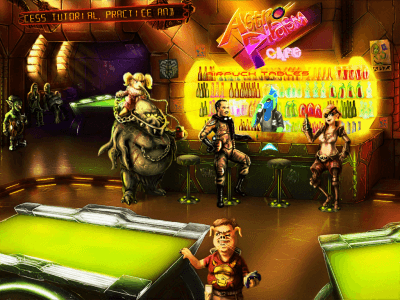 Instead of using different difficulty settings to step it up, there are different aliens around the bar you can play. As you defeat each alien another pops up wanting a piece of you. You can either challenge them to a game or take a look at their bio, which have some cool little alien facts. Y’know, for the sake of backstory and all that. There are four different modes you can play them in: Regular, Twin Puck, Magnetron and Survivor. 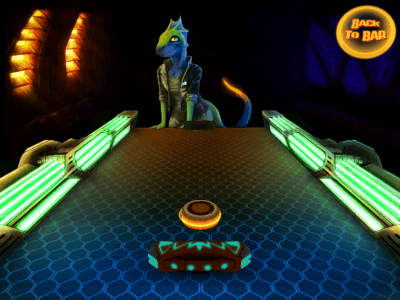 Regular is as it suggests, with your standard air hockey table, and the person who gets to 20 first wins. Personally I didn’t encounter much trouble with winning flawlessly until several aliens in. Twin Puck has the puck divide into two pucks after a certain time period, with a flashing circle appearing just before it occurs. This does mean that certain mistakes may happen if the dividing happens at an inopportune time, and I did accidentally score my own goal a couple of times. Magnetron is a barrier that wanders the space in between you and your opponent and either let’s the puck pass through harmlessly, or ‘magnetises’ it and shoots it back in the direction it came from. Survival has the puck starting at quite a slow pace, gaining momentum as it the round goes on until someone finally misses and they lose the point. This mode takes the most patience, particularly if you are facing an easy opponent because the puck will almost never gain decent momentum and it becomes a patience game more than anything. 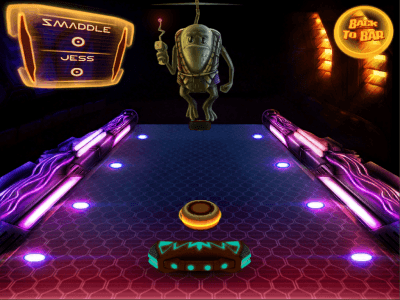 The paddle is fairly responsive, and as you move through the game you can both upgrade the puck and the paddle, which offers you different positives. Some of the more advanced, tricky paddles or pucks may take some getting used to as you get a handle on how to use them to your advantage, but overall they’re fairly easy to adapt to. 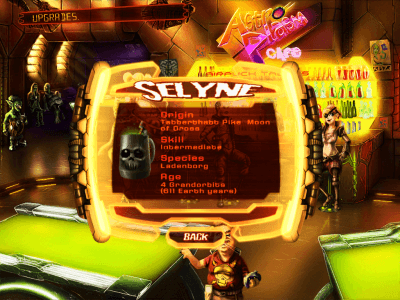 There are also actually some insight into the different characters through bios, which detail their origin, age, and skill. This was a nice little touch, and brought another dimension to that special little aspect that this brought to the game.

Like I’ve said before, the different levels are imaginatively set up, and the bar is an interesting set to look at, even though the animations are very minimal. This includes when you’re playing a round, the only thing that really moves is the opponents eyes, which at times gets super creepy. The character designs are fairly unique though, and keep a good handle on that cool noir bar theme as well as inventive alien designs. 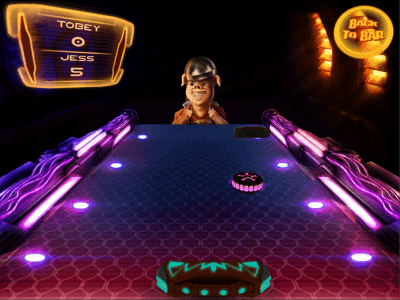 The soundtrack follows that noir, bar theme that the game screams. It varies from the jazzy to the more relaxed, chilled out beats while you are playing, depending on who you are playing. However, I found myself not wanting to have the sound on when playing, why? Well because each opponent has their own unique voices, with odd taunts, and pained grunts when you score against them. In one case of going against a small girl, I actually felt a little disturbed. Giving the characters voices is something that sets the game apart from others, however, in this case that didn’t work out as a positive for the game. This is definitely not a game to be playing loudly in public.

Astroplasm is a bit of a different game, not in its gameplay, or concept, but in the execution. It sort of defies explanation when it comes to how it plays, even though explaining the game itself is easily done. In terms of whether or not it sets itself apart from other similar arcade games, the answer is that it definitely does. If you want an arcade game that will make you laugh at its moments of pure silliness, and hilarious and disturbing voices, then this is definitely something to grab.