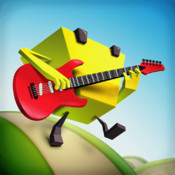 Arranger is a retro-adventure homage to the genre’s architects of the 8-Bit era. It mimics the visual and audio style of that generation, while adding some more modern accoutrements. Arman Bohn attempts to call on those nostalgic feelings, which I’m sure fans of such classics as Adventure on the Atari 2600 – a personal inspiration for Mr. Bohn – would appreciate. But, is Arranger worth the trip back in time, and can it appeal to those younger gamers who didn’t grow up with those games? Read on to find out.

You play the Arranger, a boy who is burdened with the task of acquiring 8 valuable chalices for the King of Musica, who is looking to bequeath the throne upon a worthy successor. Throughout your travels as the Arranger, you will become involved in the happenings of other lands and your own. A citizen from each of the nine worlds requires a tune to be arranged for them for different reasons. One such example has the letter A requiring an arrangement to help lull its baby to sleep. These individuals are usually the ones who will reward you with a chalice, or at the very least an item that will assist you in your search. There are also many other residents of the realms that require assistance, though their stories go no deeper than that of a single quest that needs to be resolved – such as getting a wrench to an Eaternian so they can start their ovens again. 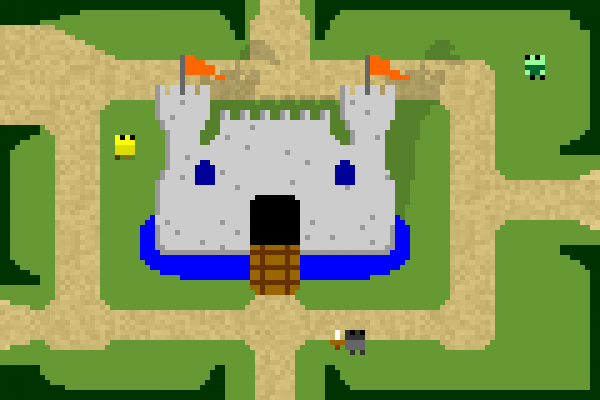 This castle could be yours!

As you would expect, Arranger has very simple gameplay. Using the touch screen, the player will find most of their time occupied with dragging and holding their finger where they want to move. There are two options for movement: a virtual D-Pad or by Touch. As simple as it is, navigation can be slightly frustrating with the restricted degrees of direction present in 8-Bit titles. You will find yourself stuck walking on the spot as you’re stuck against an object or part of the environment, and the touch screen, inherently, is not the most suitable control method for precise manoeuvring. Holding on your player character will bring up the in-game menu, where you can check your current side quests and their requirements, change settings and save or load your game – which you only have one slot for…annoying when you forget to save before the final battle and can’t do some final exploring in later unlocked areas without having to retread some ground. Engaging NPCs is as easy as walking up to them, although it’d be more accurate to say “into them”. The same goes for picking up items.

Speaking of items, you may only carry one at a time and can drop it by simply tapping on it. Your pet, named Dorg, will fetch all items you receive or find in the game and bring them to your home. The trouble is, Dorg stays in your house and in order to corral them all up, you must travel back to your home to instruct him to do so. This can be quite frustrating when an item is required for a mission or side-quest, and you have to back-track, either to the location you left it at (if you can remember where that is) or to your home. It would have been much better to have Dorg travel with Arranger and be able to fetch a chosen item then and there. It’s not a question of making the game any easier, but of making it less repetitive and monotonous. Finding and providing an item, such as a battery or wrench, is the main process for progression in Arranger. It’s a little tedious, but “fetch quests” as they are called are a trope of video games of the adventure/RPG genre, especially in the 8-Bit era. 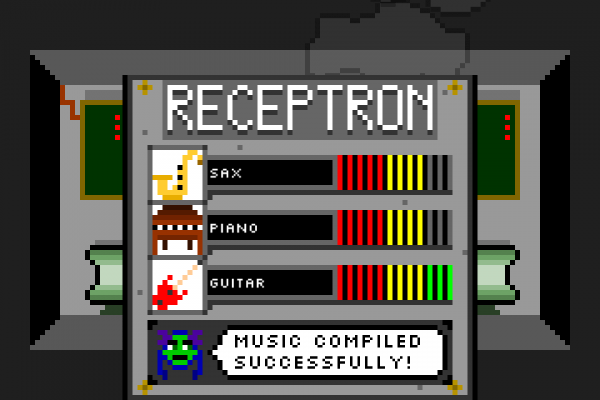 The meter displays how appropriate each instrument is for a particular song.

You also have 16 instruments to collect to be used in Music Battles, which, as I mentioned earlier, initiate once you speak to persons of interest. Winning these battles could net you a shiny chalice, or another important item. Before you begin, you must pick three instruments that will be most appropriate for a certain type of music that is being requested. The battle itself has a brain slowly moving up and down, shooting out obstacles at you as you try to hit its centre with your musical note. The note plays at automatical intervals; you just have to line it up. Each instrument’s note has a different trajectory; the electric guitar shoots straight out, while the piano shoots three keys at three different angles, for instance. You have three loops to fill the music meters of each instrument, with less appropriate instruments needing more hits to do so. I just wish there were more consequences and challenges to choosing the wrong instrument, as it is still quite easy, which makes procuring every single instrument void.

Aside from that, there are many arcade style mini-games throughout that change up the gameplay, if only for a brief time. Turpato Peeling has you swiping your finger to simultaneously peel turpatoes and land those peels in a bucket. Rainboworm Running is a timing-based mini-game where you must time your run, being careful not to step on and squash any rainboworms or you will have to start over. And in Burger Blasting, you must scroll across the screen to manage the feeding of a group of hungry diners, by tapping on their mouths, thus flinging delicious pixelated burgers at them. As you can tell, there is a good variety in gameplay here, and that’s only the tip of the iceberg. There are 24 mini-games in total that can unlocked and played competitively with Game Center leaderboard integration. 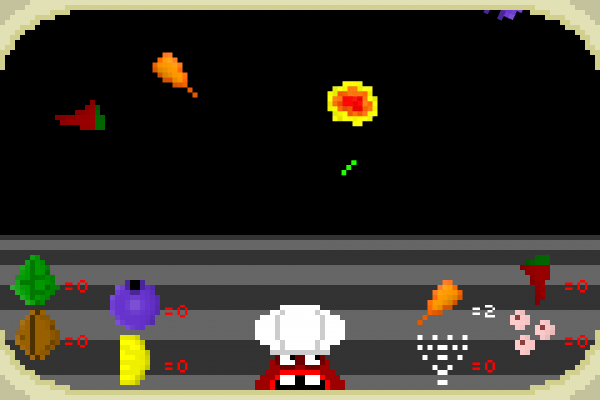 Spice Invaders, one of the more fun mini-games.

Arranger adopts the 8-Bit aesthetic that it was inspired by, and it generally gels really well. The game is colourful and vibrant, and is definitely reminiscent of the 8-Bit games of old. The charm is inherent, and each of the 9 worlds that Arranger visits represent their own art style and colour scheme that sets them all apart. Some of the visual design choices for the environments are absurd, but in a purposely comical way. The music school, for instance, looks like a haunted building with leaf-less trees out front, deep blue windows and “Music School” written in an ominous red tint overhead. Yet, when you go inside, you’ll find a regular school-room setting. Each area has it’s own distinct character, and they’re all based on a theme. Keeping with the 8-Bit era of gaming, some of these themes are as simple as the alphabet; Letterland is a world built with, and inhabited by, letters. Numerica is inhabited by, you guessed it, numbers (or, Numeroids, as they’re called here) who are naturally the bitter enemies of the Letterlandians. 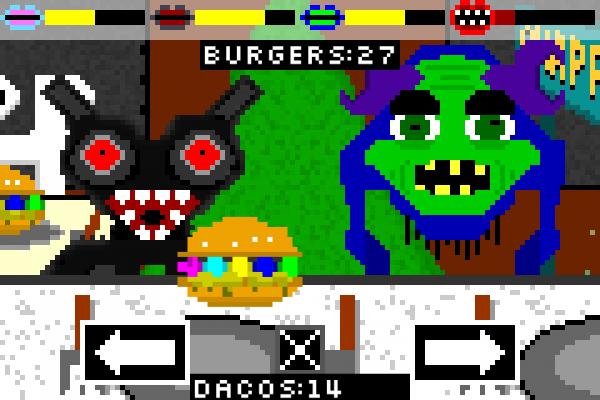 The Feard on the left scares me…

Sometimes, however, when the screen gets busier, the 8-Bit graphics read a little worse than usual. What that basically boils down to is the fact that 8-Bit graphics only allow for a certain amount of detail and that detail is usually painted and defined using colour. As colourful and vibrant as the game is, there are sections where species from the 9 worlds interact or cross-over, and with that comes less visual continuity and consistency. Consequently, the designs of these creatures clash. Now, if the game were to use a 16-Bit graphics style, their designs would be more detailed and the difference between them would be less abrasive, and this problem wouldn’t be as evident. Sometimes even the perspective can affect how the game reads too. Either way, these issues, and the limitations of the 8-Bit style, were part of the reason why games of that time did not attempt to clutter the screen and environments were very basic, both in their construction and colouring.

The music and sound effects are similarly evocative and remindful of the chip-tunes of the 80s. Each world has their own theme, each effective in portraying the mood and atmosphere of the land very well. Happyland, for example, is appropriately upbeat and lighter in tone. When it comes to the big music battles, I was very impressed to find that each instrument chosen has their own individually written tracks and therefore change the landscape of the song completely. There is still an established beat and base tune that is consistent and keeps the song grounded in the style it is made in. I initially thought that the variation was only present in the instrument attack sounds, but replaying the songs in the Music School allows you to experiment with the different instruments and really notice those changes. 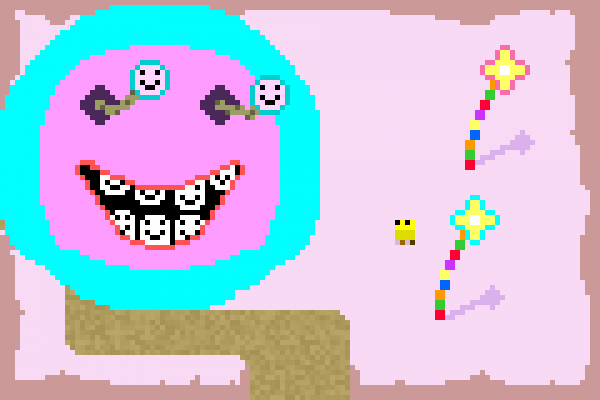 Hapnar, the…guy(?) to see in Happyland! Even his teeth are happy!!

Arranger is a nice little 3-4 hour throwback to the third generation in gaming (8-Bit era for those uninitiated), however it suffers from some very minor game design flaws and oversights. Yet, the charm is there, and although I’m a child of the 90s, I appreciated Bohn’s intentions and admire the attention to detail that went in to creating this love letter to adventure games of old. The dynamic music battles are great, but it’s just frustrating at times, and the visuals, as I mentioned, could have benefited from a slight tweak to perspective, and maybe even a 16-Bit facelift considering the ambitious detail, specifically in the characters and objects, that doesn’t always read particularly well (there’s some great 16-Bit adventures to pay homage to!!). In saying that, for a job by a one-man team, Arranger is beyond an admirable result. And at the price of $0.99, I can not justify any further criticisms. Nostalgia hunter or otherwise, give your spare change to Arranger.