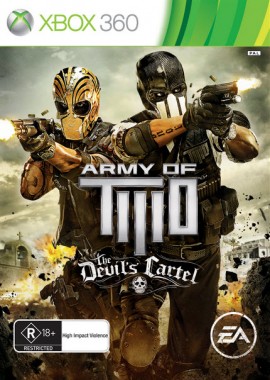 Overview
The Army of Two franchise has been around since 2008. Now, five years after the release of the original cooperative fist-pounding slaughterfest, the folks at Visceral Games and Electronic Arts have offered up another game for tag teams everywhere to sit down and enjoy. How does their newest franchise game, subtitled The Devil’s Cartel handle itself? Is it worth a fist bump or should it spend eternity with El Diablo? Let’s find out. 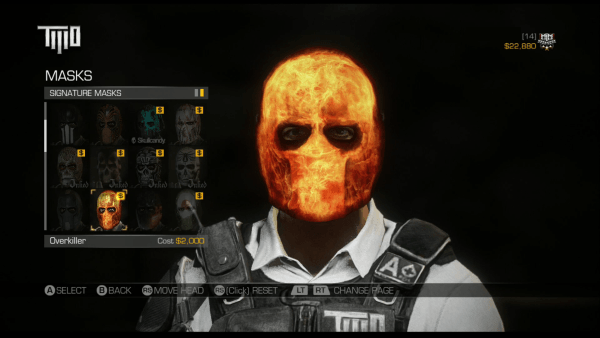 Story
The Devil’s Cartel has a much more somber tone than previous Army of Two games. The protagonists banter a little, but there aren’t a lot of fist pounds or high-fives thrown around this time.

The game opens with a convoy protecting an up-and-coming politician en route to his next stop. The private military company Trans World Operations (T.W.O.) have taken the task of protecting him. Devil’s Cartel protagonists Alpha and Bravo (yes, those are actually their names) think everything will go smoothly until they’re ambushed by the cartel. Though Alpha and Bravo survive, many of their squad are killed or injured and their client gets away from them in an attempt to run for his life.

Flash back five years. Alpha and Bravo are new to T.W.O. Salem and Rios, protagonists from the other games in the franchise, put Alpha and Bravo through their training and go out with them on a mission. When things fall apart in the field, T.W.O. scrambles to complete the mission. These events set the stage and tone for the present-day journey ahead. 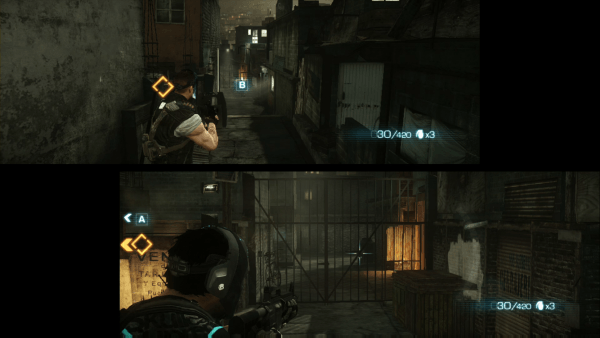 Gameplay
Gamers new to the franchise will pick up Devil’s Cartel pretty quickly. The game is a fairly straightforward cover-based third-person shooter. You and your partner work together to tear through hordes of enemies, stopping between story beats to buy and upgrade weapons and outfit them to a combination that you think looks cool. You’ll also get to activate “overkill” mode on occasion – an intensely satisfying ability that makes you invulnerable and gives you unlimited ammo for a short period of time.

Players familiar with the previous Army of Two titles may be surprised with Devil’s Cartel. With the focus moving away from Rios and Salem, a few mechanics other franchise games had are also hitting the road.

The Aggro system used to coordinate who had enemies’ focus is no longer there. Behind the scenes some form of aggro still exists, as you can draw enemy attention with cover fire while your teammate flanks, but it’s no longer such a prevalent part of the gameplay. The aggro meter so familiar to the franchise has vanished as well.

The morality system that saw its debut in 40th Day has also been removed. There is no hostage taking or life-sparing for the new duo. It’s not like the cartel has anyone who would spare the life of a hostage to get to you anyway. 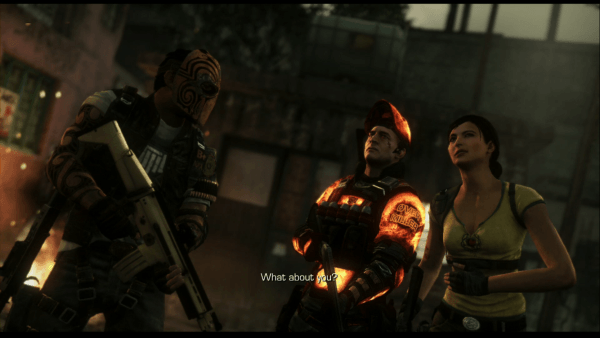 From a campaign standpoint, Devil’s Cartel is packed full. The main story will keep you busy with just over 50 missions. Though occasionally a mission will give you some unique objectives (drive this truck full of explosives into a cartel compound, etc.), mission structure primarily consists of going from Point A to Point B and destroying as much as you can on the way there. Unfortunately, it can get a bit monotonous, but to break it up a bit, you can play unlockable “Contract Missions.” These are unique scenarios that let you do some outside-the-box tasks for extra cash.

Though the focus of the Army of Two games has been cooperative play, they do include a single-player campaign for those with no internet or couch co-op buddy. The AI does a pretty good job as a stand-in for Bravo, but occasionally has some glitches and poor decisions that lead to trouble.

Couch co-op has traditionally always been the ideal way to play Army of Two games. Having a buddy next to you is ideal, especially for missions that require your team split up. The only complaint to be found with split-screen is that neither player is given a full half of the screen. This is probably to maintain aspect ratio, but it feels a bit constrictive, especially if you’re playing on a smaller screen.

Online co-op works great. When joining a game, you can either jump straight into someone’s game or search for a better fit with your preferences. You’re welcome to host your own game as well. Gameplay still feels just as fluid online as it does locally, so without someone to sit down beside you, it’s still a viable option. 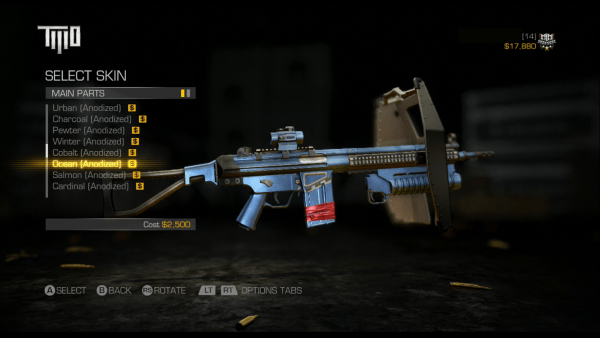 Competitive online multiplayer is missing in Devil’s Cartel. Given that so many companies have used competitive online to fuel sales of season passes and other DLC, it’s surprising that a franchise with a history of these modes is devoid of it now.

The game is not without its flaws. Devil’s Cartel has several issues that should be taken into consideration. Bugs that can cause lost progress are a real annoyance, particularly in the single-player campaign. There’s also nothing interesting to do outside of combat. It would have been nice to see some sort of hidden collectibles or alternate objectives to add variety. Finally, there are some fantastic narrative action sequences to experience, but they’re marred by heavily scripted gameplay sections. This feels cheap and breaks the flow of gameplay.

Visuals
Visuals in Devil’s Cartel are nothing particularly special. As with most shooter games, you’ll end up facing group after group of the same bland handful of enemies. It’s a little boring to see that the cartel employs identical street thugs with baseball caps to do most of their work.

Alpha, Bravo, and the other PMC operatives easily carry the heaviest weight in terms of visual aesthetic. This is largely thanks to the customized armor and weaponry each of them dons. With plenty of pre-made weapon skins, body suits, and masks to unlock, you should be able to find a look you’re happy with. If not, you have the option of making your own custom masks, too. It really helps give your character some personal investment. 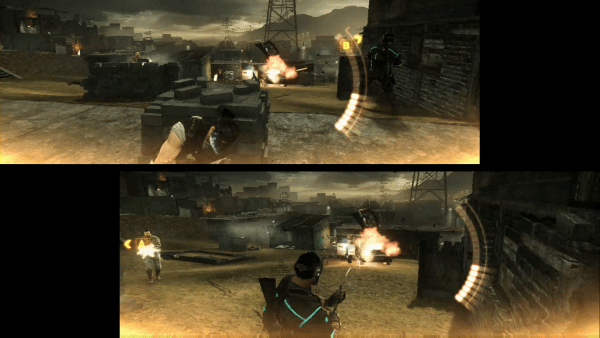 Audio
The audio design of the game is particularly noteworthy. The Devil’s Cartel‘s soundtrack is fantastic. Composed by Brian Tyler (Far Cry 3, Modern Warfare 3), the orchestral score handles the pacing wonderfully and the main theme will have you humming along before you know it. The voice work is well done, even if the lines they’re delivering aren’t. Gunshots also feel like they carry the appropriate weight. Listening to the audio when you go into slow-motion is also particularly amusing. The Devil’s Cartel is just fun to listen to all the way around. 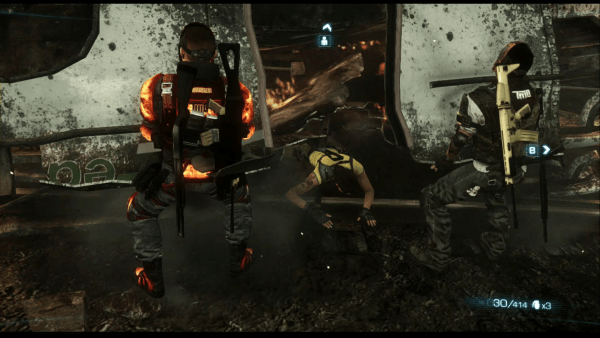 Overall
Overall, Army of Two: The Devil’s Cartel is a blast to play but it’s hampered by a few flaws. An excellent soundtrack, character customization, and solid shooting mechanics are brought down by bugs and design inconsistencies that can really harm the experience. Unfortunately, the game also begins to wear out its welcome with over fifty missions, somewhat monotonous mission design, and a rote plot with twists you can see coming from a mile away.

Ultimately, the game is a good, solid popcorn-munching romp for a couple of pals or someone seeking explosions, but it may not satiate folks looking for a deep story or varied gameplay.