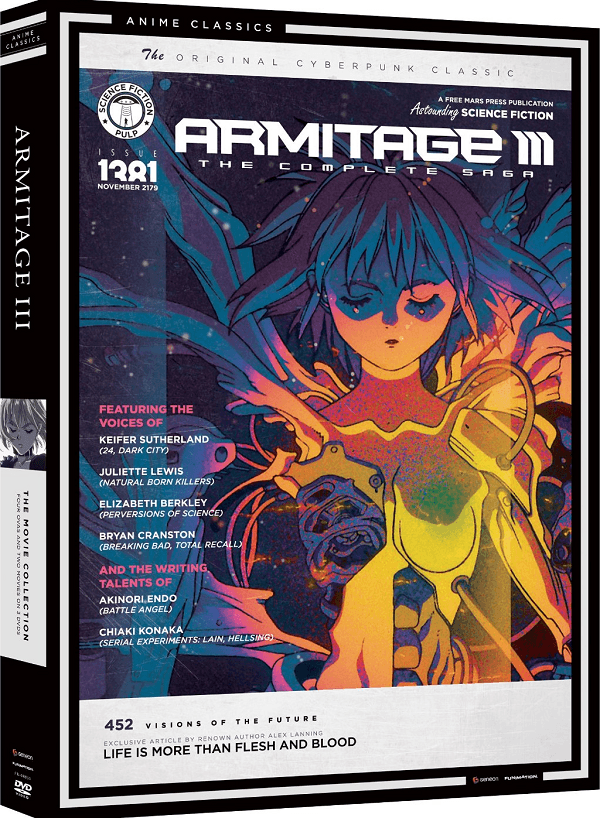 Overview:
There are many anime that can be called classics of their genre and deserve to be remembered for years to come. As such FUNimation has re-released numerous series under their Anime Classics label. These Anime Classic releases usually contain everything available for a series in one package and it has never been more evident than their most recent release, Armitage III.

Many of us have seen Armitage III in either bits and pieces in the past or in its full movie-format, as it was first brought over to North America and shown on television back in the 1990’s. What many of us may not have realized at the time was that Armitage III was originally a set of separate OVA’s that eventually were combined into one movie.  This movie was followed up with a sequel in 2004 and now FUNimation has bundled everything Armitage III related into one release. Does this classic deserve a spot on your shelf?

Story:
In the future humans have colonized Mars and they did so with the help of what was called “First Type” robots which were able to transform the inhospitable planet into one safe for humans to live on. Many years after the colonization of Mars, the planet is bustling with activity and populated by many humans as well as “Second Type” robots which look almost human and have many human-like functions. However tension has been rising on Mars as these robots have begun taking over jobs as the planet itself begins to languish from low birth-rates. 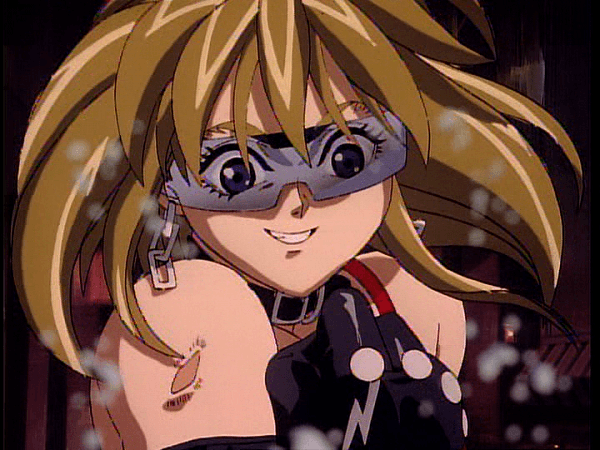 Our story follows a police officer from Chicago named Ross Sylibus who has transferred to Mars in an effort to escape from his past, a past haunted with memories of his loved one being killed by a robot. When he lands however, things quickly escalate as it is discovered that a woman who was aboard the plane was murdered. The only problem is… this woman was a very famous country singer but she also is revealed to be a new type of robot that no one has ever seen before… a “Third Type.”

As Sylibus attempts to discover the reason for this Third Type’s killer he meets with his new partner, a fiery female officer by the name of Naomi Armitage. The only problem with this parternship is… Armitage herself is a cyborg and in-fact a Third Type herself. Now with the residents of Mars rioting and hunting down any Third Type they find and a number of dangerous men attempting to kill Armitage, can Sylibus and Armitage discover the truth behind her origin? 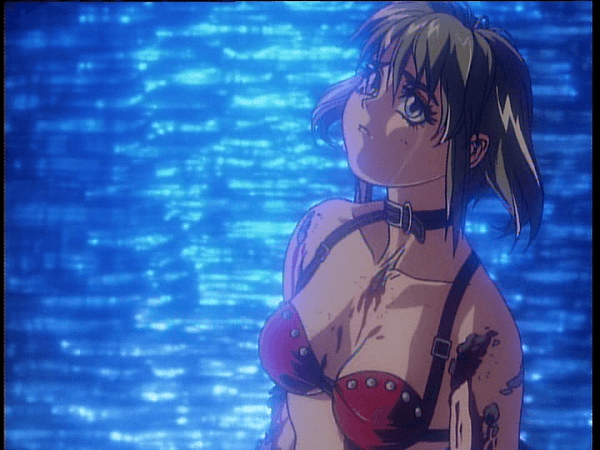 It is worth noting that although there are three actual inclusions in this release, the second inclusion in the Armitage III: The Complete Saga is actually simply a repackaged and trimmed version of the aforementioned OVAs. Armitage III: Poly-Matrix follows the storyline of the OVAs nearly down to the letter, with only a few minor inconsequential differences throughout the movie. As such viewers will most likely be eager to jump into Armitage: Dual-Matrix.

A number of years after the events of the OVAs, a robotic facility which has begun researching “Third Type” androids once again on Earth has been destroyed and every human on both Mars and Earth have begun calling tragedy the “First Error.” With the memories of the Third Types who died streamed into her mind, Armitage must reveal the true reason for this massacre and uncover the mastermind behind it while also protecting those close to her. 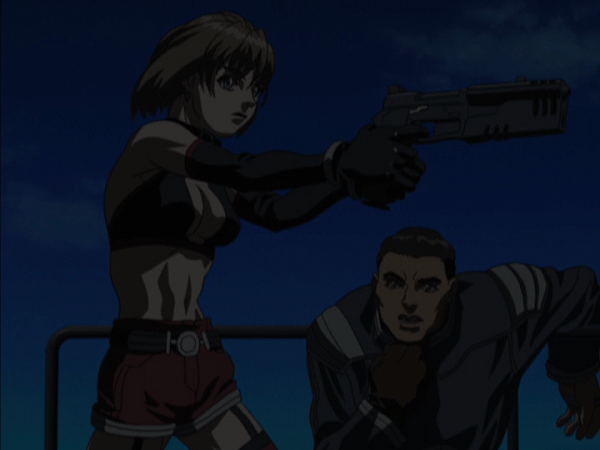 The entire Armitage III series brings up a question that many people struggle with today and one that has since been brought up multiple times in anime years later. Where does the line between a mechanical being and a living creature lie? With the Third Types being developed nearly identically to humans and capable of the same emotions as humans, is it right to treat them simply as objects or are they just as human as you and me?

Armitage III tackles this difficult question and offers a story of overcoming one’s past prejudices and accepting those around you.  Now it is worth noting that the storyline can tend to be a bit confusing at times but nearly everything is explained well enough that viewers should be able to understand what is happening or at least will at a later time.

Visuals:
Now when Armitage III was first animated it was 1995 so therefore the techniques used for the OVAs as well as the re-released Armitage III: Poly-Matrix are obviously quite dated. What is interesting however is that these older visuals actually stand up better to Dual-Matrix which was created back in 2002, a full seven years after the original. Armitage III’s OVA animations were well done and any scene featuring action was handled well, though there are a few times that the character’s animations do appear strange or poorly drawn. 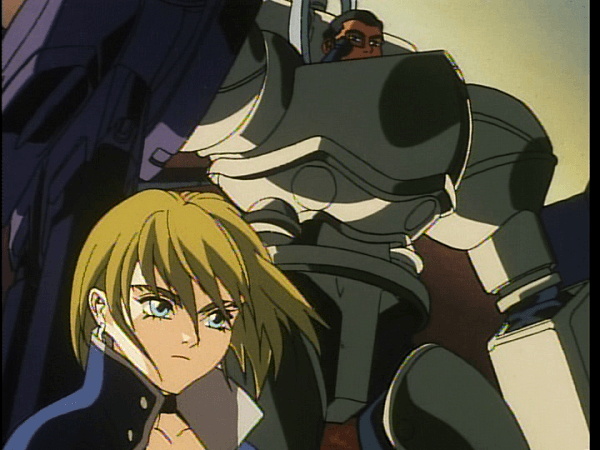 As for Poly-Matrix, the movie was given some newer, touched up animation which is quite impressive, though Armitage’s character design seems to have changed for the worse between movies. Unfortunately, Poly-matrix also contains a few pieces of CG which are absolutely terrible looking by today’s standards, bringing up an easy comparison that while animation can stand the test of time, poor CG cannot.

Audio:
Armitage III has quite an interesting pedigree behind it’s voice acting talent, however when the English voice actors began working on the project, such as Kiefer Sutherland handling Sylibus and Elizabeth Berkley  as Armitage, they were actually nobodies at the time. It is worth noting that between the release of the OVAs/Dual-Matrix and Poly-Matrix the voice actors for both Armitage and Sylibus underwent a change. Now while this may have been less noticeable for those who had to wait many years between each show, those who watch this Complete Saga will be able to notice the change easily. 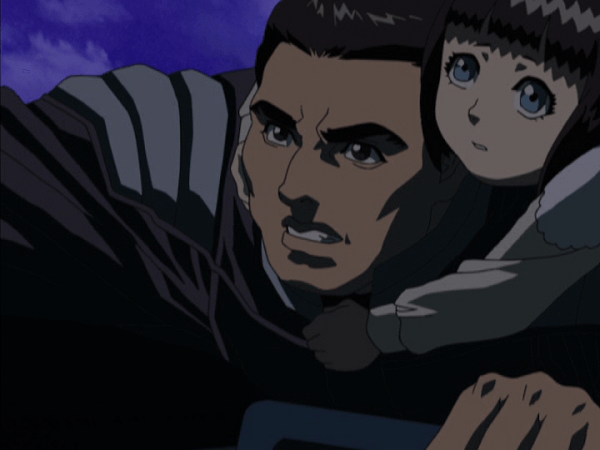 That isn’t to say that these voice actors are bad by any means, as they still provide a memorable experience, though this abrupt change in voice actors, especially with Armitage herself, can be jarring at first. The series’ soundtrack tends to be similar to electro-jazz which works well with the anime’s cyberpunk theme.

Extras:
Interestingly enough, Armitage III: The Complete Saga contains a few more bonus features than one would usually expect with the Anime Classics Line-up. First we have your standard inclusion of trailers for past and upcoming FUNimation releases. Second we have a bit of an odd decision, though perhaps a welcome one for fans of the show’s music… a music player which contains three songs: Armitage’s Theme, an Orchestral Theme and Red Planet. 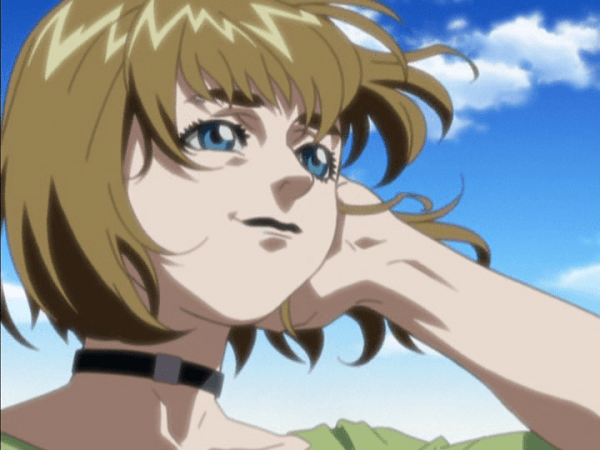 Also included is a behind-the-scenes style video that is titled “Assembling Armitage.” In this video we are shown footage of both the Japanese crew as well as the English crew who worked on bringing the series over. It is worth noting that the interview is old, not refilmed for this release. While these bonus features are still rather barebones, they are decent inclusions though perhaps more could have been included.

Overall:
Armitage III: The Complete Saga takes a series that many of us may have watched before we even knew what anime was and combines it into one simple release. Although it is disappointing that the inclusion of Dual-Matrix is simply a trimmed version of the OVAs with a few minor differences, the OVAs themselves and Poly-Matrix provide an enjoyable viewing experience that attempts to resolve the philosophical question about what truly defines life.