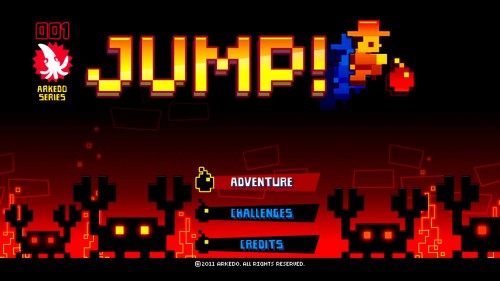 Arkedo Series – 01 JUMP! is a downloadable title developed by Arkedo Studio, an independent French game developer and published by Sanuk Games, who published Hysteria Project 2, a game reviewed by me. I did not look favourably at that game, so could they surprise me with this game. To put it simply, they didn’t surprise me… they surpass that by a great distance. This is a game where nostalgia runs free but in a very polished environment. The gameplay is simple yet fun. Visuals look great and the music sounds beautiful and retro. Of course, the game isn’t perfect as there are a few inconveniences, but overall is a well built game.

Story
Once you select the adventure mode, you are given the whole story. There is an iron crab causing terror throughout the land by leaving bombs all over the place. It is up to Jumpman, the main character, to pick up these bombs and save the day. So, a very simple story where the objective is to pick up bombs scattered throughout the levels. 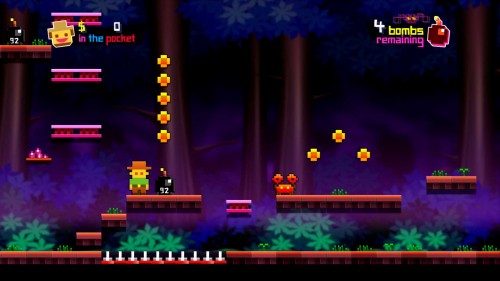 Gameplay
The game is very simple. Jumpman lives up to his name as his actions involve a lot of jumping around by pressing the X button. Of course, you are moving as well with the use of the directional buttons left and right. These controls are smooth and very responsive, as any platforming game should be. As stated before, Jumpman must pick up bombs that are placed all over each level. The bombs also act as the timer of the game. Each bomb has an individual timer, so one bomb may explode sooner than that other bomb right next to you. Some levels have bombs close to exploding as part of the level, testing your skills under pressure. You also collect coins, counted as money, which is a throwback to the days of the 8-bit platformer. You may also encounter pigs with a number. These are bombs in disguise and the coins have a role. Match the number of dollars with the number on the pig and a bomb is yours to collect. You encounter crabs, bats, fire, skeletons throwing unlimited bones, falling platforms and invisible blocks.

There are two modes: Adventure Mode and Challenge Mode. Adventure is basically the story. In a linear fashion, you will move from one level to another. However, you have to finish it in one sitting as there are no save points or option. The playthrough shouldn’t take long; however, with some levels respawning heart shaped extra lives after death. Once that is done, Challenge Mode is unlocked, consisting of 31 levels where the objective is to collect all coins and other collectables throughout the levels of Adventure Mode. For those trophy collectors, there are nine trophies available, four of those hidden.

Attacking is where the game disappoints. Throughout the levels, you will find several throwing knives. You throw them by pressing square. Although I think it is a cool idea, the knives are very sparse. During my playthrough, I encountered six knives over twenty five levels, with none of them respawning after death. I think that is too sparse, but the aim of the game is to jump. Talking about jumping, this game is supposed to be a throwback to the retro games. If I can remember, I believe those games had jumping as an attack. In this game, jump on an enemy and you die. Jumping is not an attack in this game. Although it didn’t hinder the gameplay, it is usually a staple in the platforming genre, so it is a disappointment for it not to
feature. 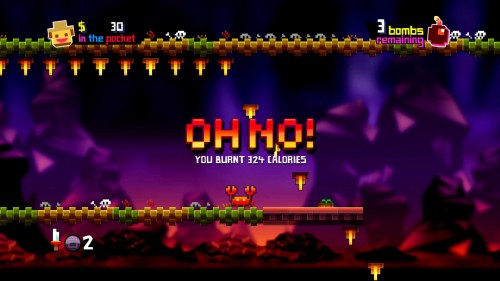 Visuals
They wanted that retro look and they achieved it. They are stunningly nostalgia (if that makes sense). Each little square is glorified in high definition. Yeah, that’s what the game is pretty much made up of, squares. No matter what shape it is meant to be, each item, each enemy, even Jumpman is made of squares. It is very nostalgic. Even text is just little square blocks. Speaking of the text, it can be hilarious and very insulting (for example, teasing your death by saying “And Bam, Your Dead”). The environments are bright and full of colour; complementing each other very well. The animations are very smooth. Jumpman invokes his own original jumping animation, but still gives a hint of a very famous influence. Crabs move from one end to the other, the bones somehow semi-hone on you, but the bats can be very annoying with their animations, blocking possible jumping paths or just hover above you. Overall, the visuals are beautiful and well designed. 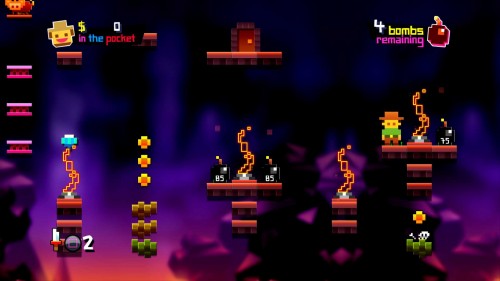 Music
The soundtrack isn’t numerous, with only a few tracks. Every ten levels the track will change. The first ten levels have a track of starting out on an adventure. The second track invokes a heightened sense of danger. The third track reinforces the danger that Jumpman faces and builds up to the final confrontation with Iron Crab. Each track is full of bleeps and bloops which filled the ear of gamers in the 8-bit era. They are all good to listen to; however, they are not that memorable. The tune is made of only a few notes and repeats too often. Still, they are a joy to listen to while you Jump throughout the levels. The sound effects sound cutesy. For example, bombs pop like a balloon when they are picked up. My favourite sound effect has to be the bombs exploding. It recreates that sense of failure, accompanied by a grand firestorm that really tells you that you screwed up, which is what a game should be handling a loss situation. Overall, the music is great and fits well with the game. 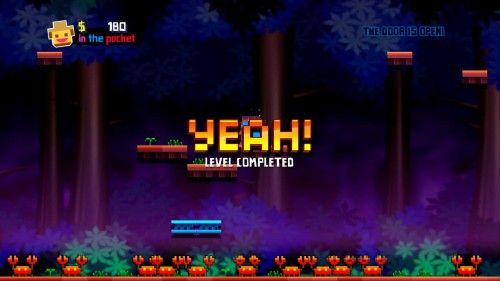 Overall
This is a must buy for those who are fans of the platforming games of yesteryear. The gameplay, although simple and with a few minor inconveniences, will keep you playing for hours. The visuals reflect the modernity of the game but also retain the classic retro look. The music is great to listen to, with the sound effects adding to the nostalgic factor. If you want a modern 2D platformer which reminds you of the good old days of the 80’s and 90’s, look no further.