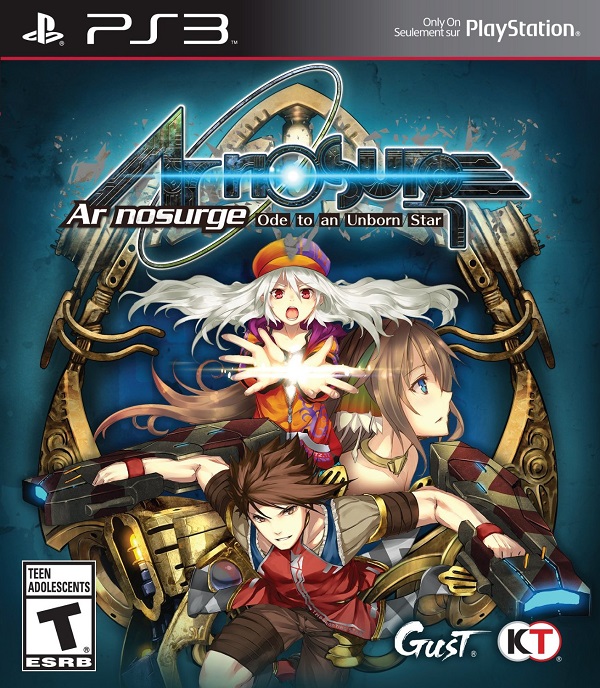 Overview
There are games that are released in Japan that gamers in the West feel like we may never see and then there are those that seem quite obvious. When Ar Nosurge was released in Japan earlier this year, it was a title that seemed to have a very limited chance of being released in the West thanks to the fact that it continued a story that started from a game that never made its way West, Ciel Nosurge, and the fact that that title was the start of a new series of games called Surge Concerto. Still, less than eight months after the Japanese release of the title, Ar Nosurge: Ode to an Unborn Star has been released in the West. Being the first game of its ilk to head West since Ar Tonelico Qoga, is Ar Nosurge worth picking up?

Story
Ar Nosurge: Ode to an Unborn Star is a bit of a strange title thanks to the way that it is placed in the Ar series’ timeline. You see, Ar Nosurge takes place prior to the events that occurred in past games from the Ar Tonelico series but also happens after the events of the Japanese exclusive Ciel Nosurge, meaning that not only will those unfamiliar with the franchise miss out on some noticeable references to past games, but it is recommended that, at least through summaries, you read up on the events that happened in Ciel Nosurge as events in that game revolve around a number of characters in Ar Nosurge. 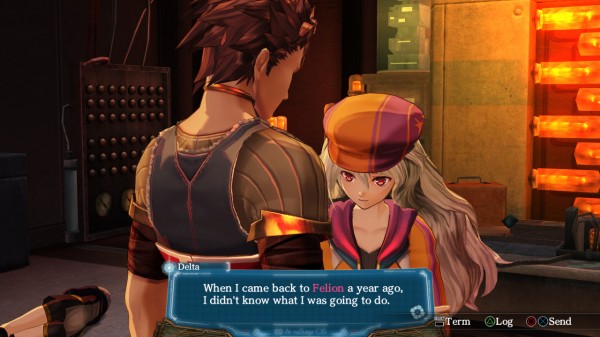 That being said, Ar Nosurge is a massive game that harkens back to an era where JRPGs didn’t hesitate to spread their wings and create a world full of lore and a storyline spanning over fifty hours in length. When you begin the story, you are placed in the slightly amnesiac boots of Delta, an “ancient one” aboard a massive spaceship full of humans who left their dying planet centuries prior in order to find their new sanctuary.

Being an ancient one who slept for centuries, Delta is paired with his childhood friend Casty who is capable of wielding song magic. Cass is a member of Plasma, an organization created to protect humanity against the Sharl, a mysterious and hostile fairy-like life form, and those who have chosen to work with the Sharl. On the other hand, players also step into the story of a strange robot named Earthes as it escorts and takes care of Ion. 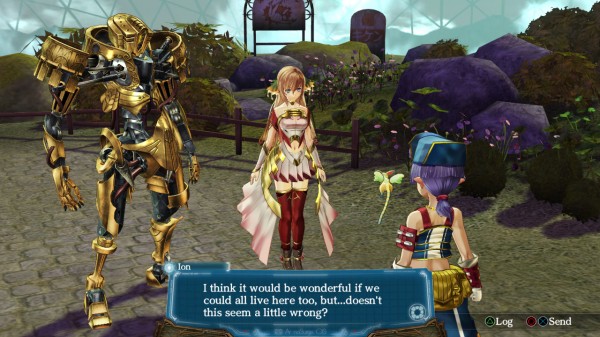 To explain the story further would not only leave you confused but also serve as a bit of a disservice to the game as the various revelations within the story are best left to be discovered by the player. It is also an issue however as, thanks to the aforementioned problem with Ciel Nosurge , that it can be rather complicated to stay on top of everything, even if the player reads into every explained element of the story and checks out the supplied definitions of various terms.

Those that can keep up with the story will find a meaningful and meaty story, something lacking in many RPGs nowadays, as the characters we are introduced to are given so many ways to interact with each other, including the return of Genometrics and Diving as well as new field dialogue that allows not only main characters to talk about random events but even companions to chime in. The Genometics system is not only a good source of humor, but also one of the best ways to learn about the psychology of a character. These systems involve “Diving” into a characters mind, usually Ion or Casty, though side characters can also be explored, allowing the player to not only learn more about their personalities but also their hidden secrets. 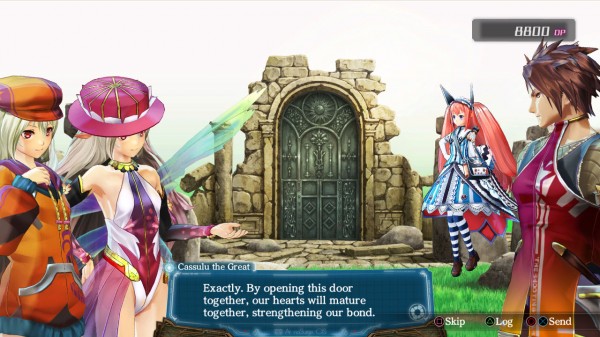 The scope and length of Ar Nosurge’s storyline creates an enthralling world that can ensnare the player to play for hours on end as they learn more about each character and their past and watch their relationships develop as the story progresses, especially once the pace quickens later into the title. It is worth noting that thanks to the length of the game and the massive amount of character interaction, one can expect a lot of dialogue and reading, however again this is something that fans of the JRPG genre have likely been missing for quite some time.

Gameplay
Ar Nosurge is a far different RPG experience than many fans of the genre will likely have experienced thanks to its unique battle system. First and foremost, whenever you are exploring an area you can find various objects within the area and will be shown exactly how many enemies can be encountered as well as meter that will determine how likely you are to have a random encounter. Once you do enter battle however, you will only face off against however many enemies are in that area, and if you defeat all of them, you will not be forced to fight again and again until entering a new area and returning. 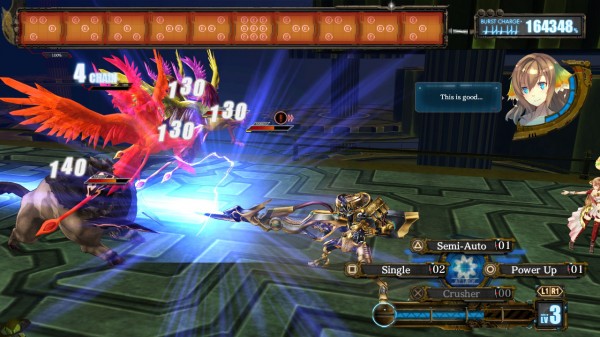 Once you do enter combat, the real twist occurs. Enemies you encounter will appear in waves as they approach you in lines. Delta or Earthes, depending on the pair at the time, will take to the front to battle against enemies while Casty or Ion will stay in the back to sing their battle magic. Players will take turns fighting against the enemies by moving up and down the lines, targeting them with various combo attacks, to eliminate them and earn various bonuses. This includes break bonuses and other systems that can extend your turn even further, allowing Delta/Earthes to eliminate numerous enemies before they can react.

When they do attack however, it is up to the player to protect the songstress as enemies will only target her. Defense comes in the way of timing shield deployments to lower incoming attack damage to keep their singer alive. After the songstress reaches a certain charge, players can unleash Song Magic that almost always wipes the field of standard enemies, mowing down waves of opponents with ease. Outside of the aforementioned combos and Song Magic, players can also use various items in combat and, once certain events with characters are triggered, “Friend Skills” can be used from supporting characters to add a little extra flair to the fights. 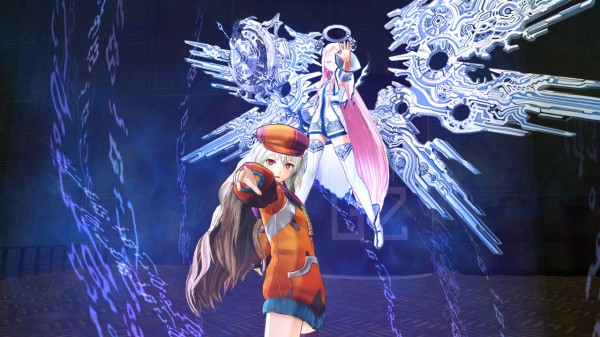 It is worth noting that although combat can be as mindless as simply smashing buttons and triggering the Song Magic when available, this can result in you failing later in the game on any difficulty besides the easiest. Instead it is best that you take the time to learn which combos are best, what enemies to target first, and so on to master the fast paced combat system. That being said, it does mean that combat can be a bit mindless at times, especially when it comes to lower leveled opponents, even on harder difficulties.

Other than combat, players will be spending most of their time either making use of the Genometric Dive System, Purification, or Synthesis. Synthesis in Ar Nosurge is a simple affair that involves gathering items, talking to a certain character to learn recipes, and creating an item which always results in an adorable dance number as the item is prepared. 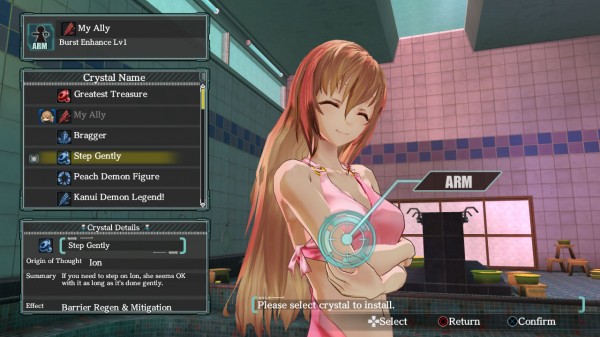 As I mentioned earlier, Genometrics give players a look within the hearts of their companions and here they will make various choices, usually using “Dive Points” acquired from events and combat, to solve various issues within their hearts to not only unlock stronger Song Magic but also various crystals. These crystals provide additional boosts to your companion, however to do so you must undergo purification which takes place in a spa like area where players can insert crystals as well as explore the relationship of the characters a bit more in a fan-service laden setting.

Visuals
Thanks to Gust taking a stylistic approach to their character designs, they remain quite delightful looking despite the fact that their animations are disappointing to witness as they are stilted while exploring the field and fighting in combat. The actual dialogue sections make use of these character models to better effect by providing a decent amount of expression as they react to situations. There are a number of issues that have slipped past the translation quality checker as well, since not only are there issues with grammar from time to time but various misspellings and even a misnamed character is found within the title. 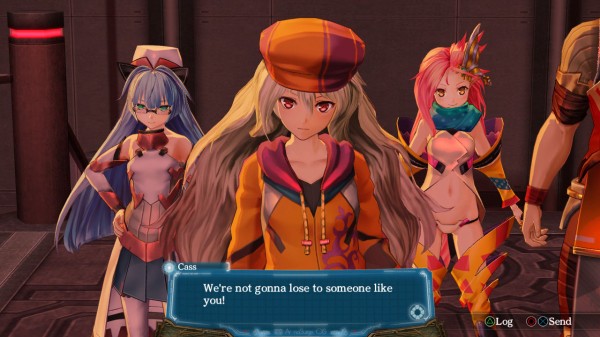 The environmental designs range from mundane to fantastic depending on the area and though it is worth noting that palette swapped enemy designs do become an issue. Although I mentioned that there was fan-service earlier, it is fairly tame even in the various CG scenes that are shown throughout the game and can be unlocked in special Dive choices. 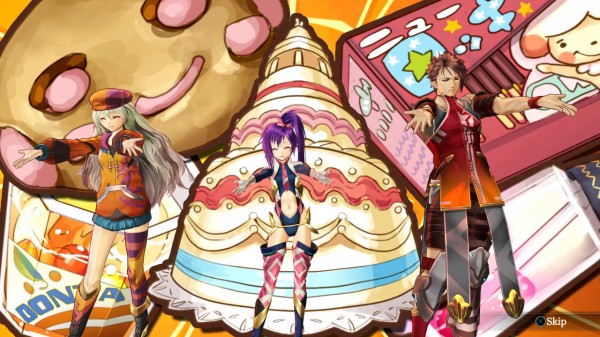 As for the music… anyone familiar with Gust’s work with the Ar series should know what to expect but even that would be selling it lightly. Ar Nosurge’s soundtrack is stunning. Not only are there numerous vocal tracks of all types that are treats for the ears but even the various instrumental songs are very impressive, ranging from orchestral to rock themed ballads. There really is something for everyone in this game’s soundtrack, making it one of the best I’ve heard in quite a long time.