Angry Birds. Enough said, right? It’s one of the most popular mobile games; spawning a whole bunch of merchandise and even desktop versions of the game. If you haven’t heard of it by now, then you must be living under some sort of a rock that hasn’t been knocked over by a bird (who is rather angry) attempting to get their eggs back. Well, the birds are back with yet another installment of furious fowl flinging – this time in space. Angry Bird’s Space may very well be the breath of fresh air (that ironically wouldn’t exist in space) that a stale series might need. Angry Bird’s Season’s was a bit of a poor attempt to thematically and seasonally release updates, all the while the original title kept spawning new levels – all of which were much the same. Not to mention the movie tie in with the film Rio, which was a rather shameless attempt to add a movie bird in to the title – with little to differentiate the title other than improved graphics and an additional bird. Essentially, flinging birds just isn’t the same time-killing fun it once was.

The game plot is essentially the same. It’s not told so much through the game itself, but through tie-in Youtube animations that show how the bird’s eggs ended up in space. With the arrival of a new bird from space an alien pig takes the eggs through a wormhole in to space. The birds follow the eggs and gain super powers, or something, before taking aim from their slingshot. There are a few animated cut scenes and comic book style panels that push the narrative forward. Being a casual game, the story is played out mostly by the gameplay, with the ending of whether or not the eggs are safe coming down to the player’s aim. 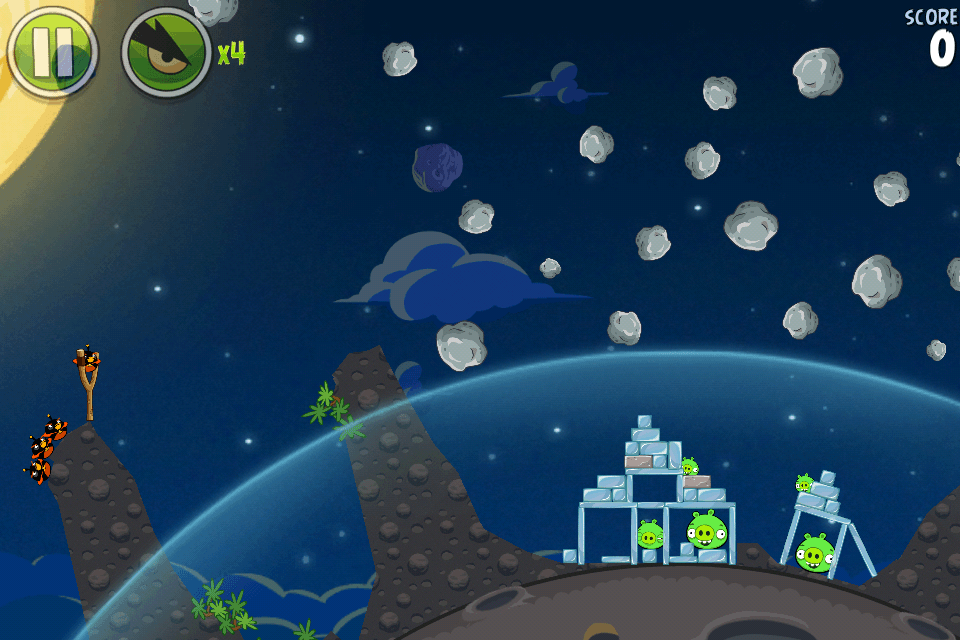 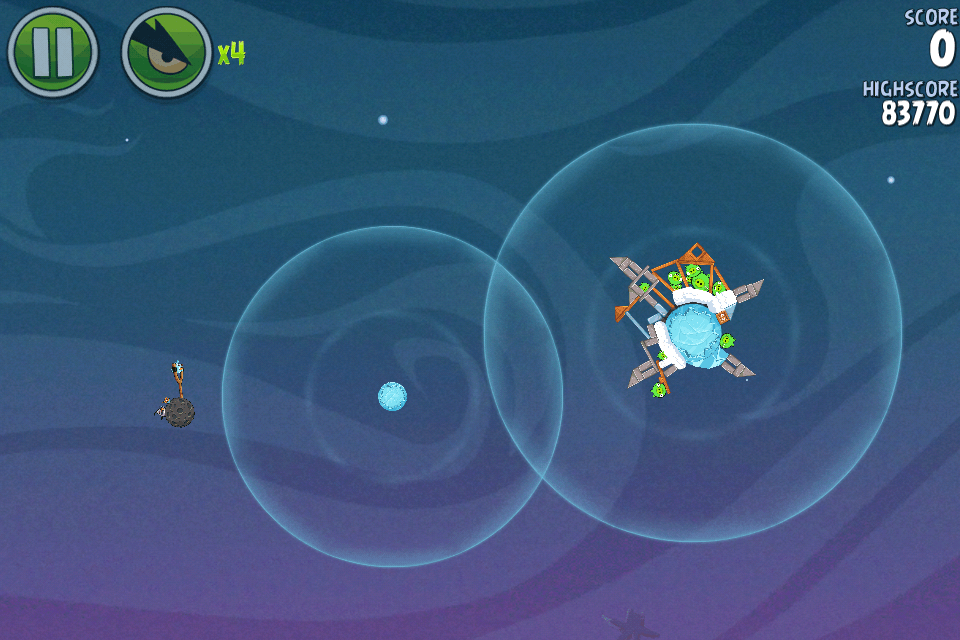 The physics is what made the game so successful. While it may not mimic actual gravity, the world of these little birds came to life with amazing physics of the world. Angry Birds Space takes this to the next level. Being in space, there are varying levels of gravity. Beyond the planets, objects, birds, pigs, you name it, float in the vast vacuum of space. Gravitational pulls circulate planets, pulling objects towards the surface or allowing the birds to rotate around the planet before hitting their target. If Angry Birds required a precise aim, then Angry Birds Space requires double so. The extra additions to the gameworld are amazing. Each level I entered with sheer excitement as I attempted to utilise the power of the planets to obtain my goal. This is a thrill I have not felt since I first got my iPhone and dished out the then $1.19 to purchase Angry Birds. The feeling of sheer mastery earning three stars on a level with multiple planets and different directions of planetary rotation is unmatched in the casual gaming genre. Watching those little birds rocket around worlds before hitting their target perfectly is an absolute delight. 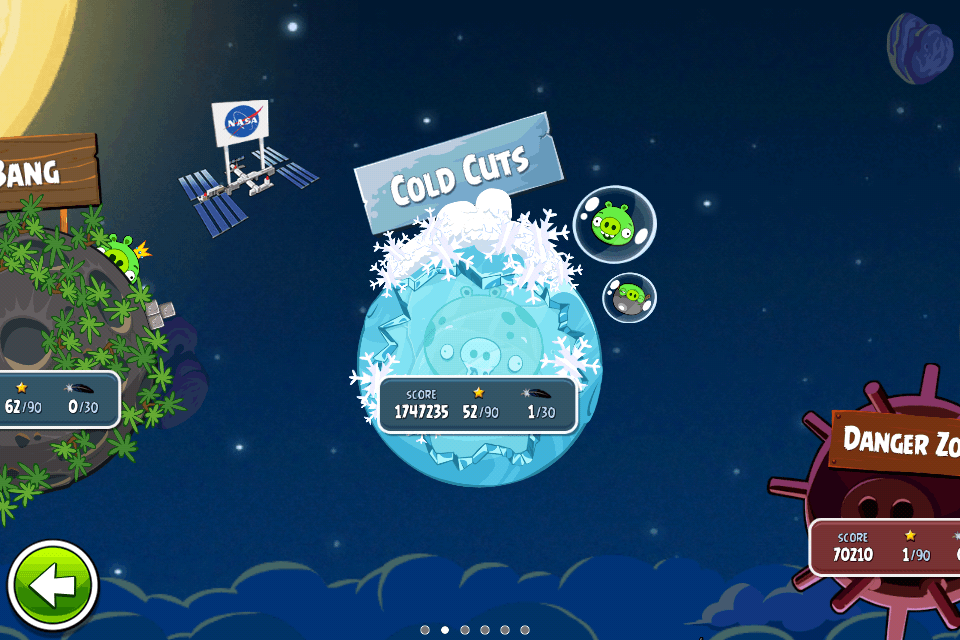 Some birds have been slightly modified for the conditions of space. The yellow bird now can be aimed at selected targets, and the black bird’s bomb response is a little less volatile. As I mentioned earlier, there is also a new bird in the nest. An additional blue bird, which looks like an ice-cube, has the ability to freeze near by blocks. This can come in handy, as I am sure it was meant to, when confronted with impenetrable stone blocks. The addition is not overwhelmingly exciting, but the extra level of strategy does make the game more enjoyable. The Might Eagle returns too, this time he can be earned throughout the game and appears in a wormhole, knocking down everything nearby. This is a bit of a cheat, but if you earn it, why not use it? With the addition of new birds, comes new pigs. At the end of worlds, players will be confronted with boss hogs that need to be defeated. It is an odd choice for the series, but I think it really plays in to the science fiction element of the game – where the final battle to save the galaxy takes place. 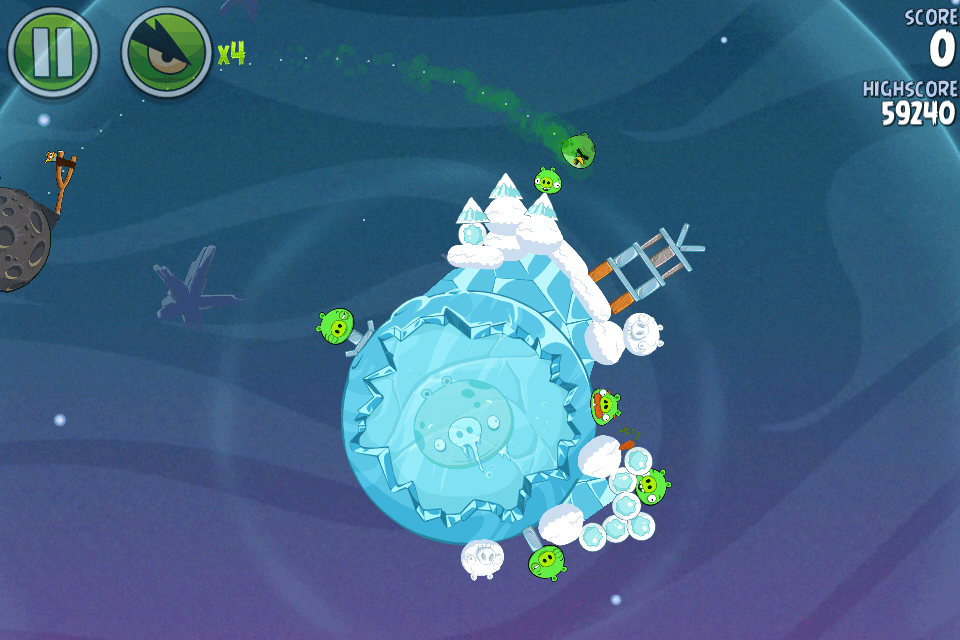 All your favourite birds are here, with their new pal the ice-cube. However, they have all been given a science fiction-esque super hero make over. Purple suits, sci-fi goggles and even the Incredible Hulk, all give that ‘space’ element to the game. The mechanical features, the blocks and pigs, all look much the same, with the exception of some rather nasty looking boss hogs. The level design and colouring is a much needed element to the series, which was trailed in Seasons and I feel is finally perfected here. The levels really do look like they are in outer space. The chirping and chattering sound effects make a reappearance, which may not be such good news for some. But honestly, how can you have an Angry Birds title without them? As much as the classic sounds really signify Angry Birds, the tweaking of sounds to fit the theme is much appreciated. The large echo of bomb explosions and the faint sound of rockets as birds are propelled through space really bring the game to life. 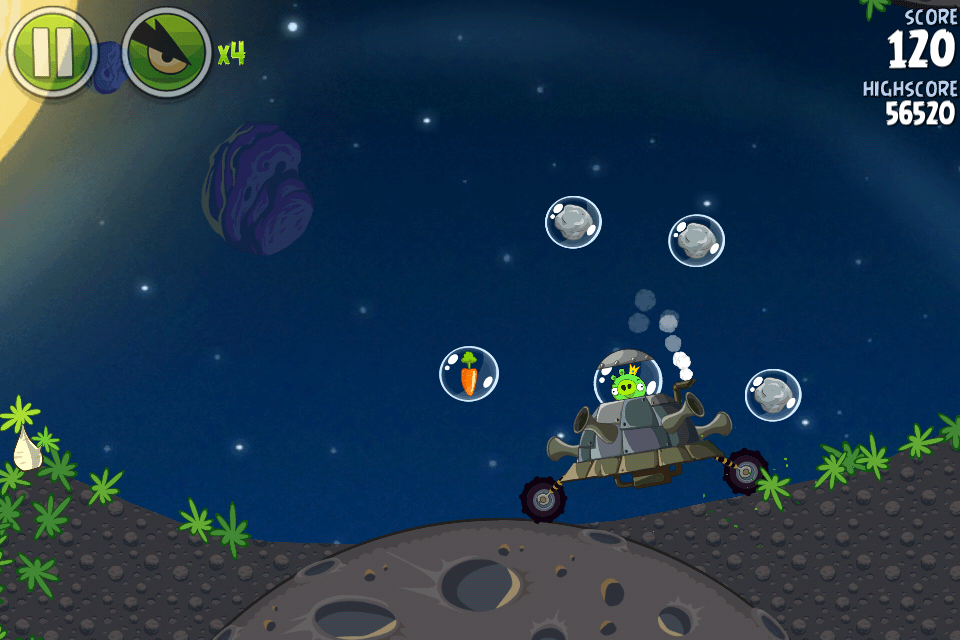 The physics of Angry Birds Space is nothing short of remarkable. While it may be hyperbolic, the game works as a self-contained world. I’m a little disappointed by the attempt to try and pull more money from customers (which is how I view the other ‘sequels’ to the original) by selling harder levels at additional cost. However, free updates will be available, as always, so I can only sit back and wait to explore the vast reaches of the galaxy, in search of eggs and the coveted golden stars. Angry Birds Space is more than just Angry Birds with a science fiction makeover. It’s a wonderful re-imagining of what has become a classic casual title, and can only be highly recommended for anyone able to purchase it.