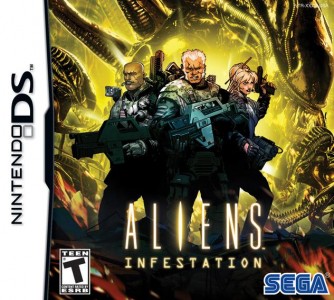 A 2D game giving off an eerie and intense atmosphere has been nearly unheard of for the genre since the days of Clock Tower and Metroid. Interestingly enough, WayForward have utilized both of these traits in the recently released Aliens: Infestation. Based on the hit film franchise, this 2D “Metroidvania” style game puts players in the role of one (of the many) colonial marines as they explore the dark and grizzly environments before them. The final result turned out quite well and it can easily be said that this release may be one of the most overlooked titles to come out this year. So what makes killing this batch of xenomorphs so satisfying? Here is my review for Aliens: Infestation. 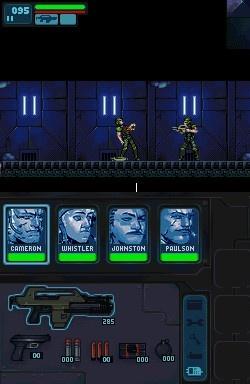 Story:
Infestation starts out as fans would expect when a team of colonial marines get sent to investigate a ship in distress. This ship in question of course is the famous Sulaco from the film franchise, and those familiar will feel right at home in this fantastic recreation of the famous setting. Now our heroes of course soon run into a complete outbreak of xenomorphs and other dreadful beings and must work together to terminate the foreign life while trying to simply survive in the process.

Everything in the plot is told through text-based dialogue, which fits perfectly with Infestation’s 2D aesthetic. While I enjoyed the story told here, the most prominent sense of character throughout the game is not in the narrative, but instead through the many marines that you take control of. You see, throughout the game you can find many of your squad-mates scattered out aboard the ship that will join up with you instantly. Each one of these little soldiers are full of character and have their own distinct personality, which makes finding each one a huge reward as it is rather easy to get attached to several members of this quirky cast. Whenever a squad member dies at your control though, they stay dead until the end of the game. You might think this would be a bad thing, but it actually made myself try even harder to keep my treasured teammates alive which in turn made the whole experience feel more rewarding and complex overall. Since each marine has their own take on the situation at hand, this also encourages several playthroughs and rids the game from feeling repetitive over time.

Gameplay
Take one part Metroid, one part Contra, add in some aliens, and you have Aliens: Infestation as your result. After the player selects the marine of their choice, they then have to set out through the environment to solve various missions assigned to them. Exploration is the main ingredient of the game (like most titles from the genre), which means the player must trek through the expansive areas within to find their appropriate destination. A lot of the time most missions consist of simply trying to survive while trying to find a certain key card or object that will open a door. Other times you will have to seek out a boss to defeat to progress further. This formula really isn’t new by any means, but Infestation does a great job at making this ride an enjoyable one due to the feeling of impending doom that lies around every corner. 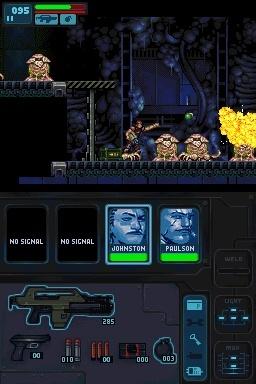 Part of this atmosphere I am speaking of is actually crafted by the way these marines control. Each marine can run by holding down one of the shoulder buttons, but a stamina meter keeps you from just breezing through the game to provide a more realistic feel. These marines are very slow on foot though and at first I was a little put off by how long it was taking to traverse through the game. However, after just a short time it became obvious that these crawl-like movements were actually included to make the player take in their surroundings and the effect that results allows for a much more immersive form of exploration. In reality, if you were to be in an unknown place with danger lurking everywhere, would you run through like a madman or cautiously approach new areas with extreme caution? It’s easy to see that a lot of thought went into making these mechanics blend with the gameplay, and WayForward should definitely be saluted in their efforts here.

With xenomorphs all over ready to pounce at a moments notice, you’re going to need a bit of an arsenal to get through. Luckily, each soldier comes fully equipped and ammo and extra weaponry can be found scattered about the Sulaco. These weapons include the likes of grenades, shotguns, pistols, and several other firearms and all come in use for fighting certain enemies in their own unique way. For instance, lighter enemies usually fall quickly in just a few shots, but others can stay alive and run rampant until several clips are unloaded. Ammo is not that easy to come by either, and it is very easy to be down to your pistol during a boss fight due to using your best equipment for a nasty facehugger so conservation mandatory for survival. 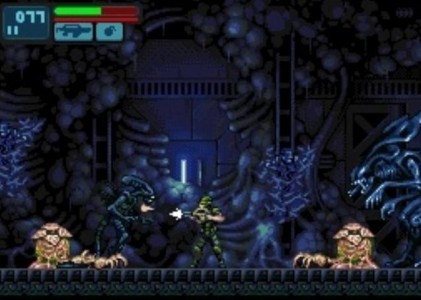 While the variety and limited supply of nearly everything (sans the pistol) is quite refreshing, my biggest problem with Aliens: Infestation was how battling these foes goes down. Each time an enemy makes even the slightest contact with the player, damage is automatically taken with no proper sound effect or animation displayed. These aliens are fully animated when they do attack, but even the slightest brush up against one can drain a health bar at an instant. This does assist in keeping the players on their toes even more, but since these aliens can jump out at you from nowhere, a few deaths feel flat out cheap at times. I will say that there is an effective dodge roll that can be executed to negate this effect, but when you are fighting a large boss it can sometimes feel nearly impossible to roll out of harm’s way in time. As the game progressed, I grew more accustomed to fighting at a distance and the gameplay was so enjoyable that I quickly forgot about those minor frustrations, so I would imagine that those willing to learn a few techniques of survival will not have much of a problem when it comes to making physical contact with foes. 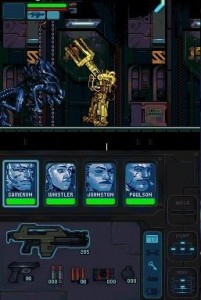 As I mentioned, each character you play as must be treated with love as a death can be permanent within this game. This little feature isn’t just for the story though as it is actually used to determine how many lives a player has. You can have up to four members in your squad at one time, with the three inactive teammates located in a save room. When you are getting low on lives…or characters for that matter, you must then attempt to hunt down another marine to join up with your team. The player can choose to swap out their present character at any save point, but once they are killed in battle, the next squadmate must be chosen to take over right where the other left off. It’s rare when you see a life system defining a game like it did here, but this innovative mechanic felt refreshing and completely complimented every aspect of the world WayForward created. This isn’t one of those games you beat and leave alone for a while, as there is always that incentive to simply perform better and try to keep more marines alive on the next playthrough.

Graphics/Audio
Even though the aliens and even marines look as they should, this title isn’t exactly eye candy in terms of visuals. When I say that I am talking about the sprites for the marines to be more specific. Each personality can easily be noticed from the next based on looks alone, but the high level of detail used seems to have worked against the sprites used and makes them look a bit over-pixelated. Now, maybe this was intended to go along with the “retro” feel of the game, but I couldn’t help but feel that the models were simply too small to carry their heavy amount of detail. I can say that they were well animated however, as each sprite possesses several individual animations which are all very fluid and realistic. Environments, as well as the large bosses in the game also look utterly fantastic and help balance out Aliens’ other visual imperfections while giving each area has a very dark and isolated aura. 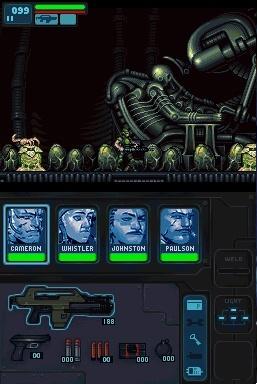 Even though there is very little soundtrack and no spoken dialogue, this title utilizes it’s sound in the best way possible. Most of the time, you just hear the footsteps of your marine, slowly clanking against a steel flooring. This element, as one would expect, makes each moment tense and cranks up the anxiety ten fold. When an enemy finally makes a sudden reveal, it can be a bit jarring due to this and the screeches and roars of enemies keep the battles exciting and oddly realistic.

Overall
If this title was released in 1994, there is no doubt in my mind that Aliens: Infestation would have gone down in history, right alongside Super Metroid, Castlevania, and the many other 2D greats from the past due to it’s top notch gameplay and atmospheric presentation. This is the year 2011 however, so those looking for groundbreaking innovation or stunning visuals may not find what they’re looking for here.

With that said, I consider myself a “retro gamer”, so playing through Aliens: Infestation was an absolute delight for myself as it was honestly refreshing to see a developer put new ideas to work with an age old concept. The characters, story, gameplay, and even the “permadeath” life system blended together perfectly to create one of the richest experiences we have seen on the DS to date and the challenge level is sure to give even the most seasoned vets of the genre a nice run for their money. Go ahead, stick that SNES back in the closet, as this xenomorph-filled adventure is one not to be missed by anyone that’s craving some pixelated greatness.

I Give Aliens: Infestation