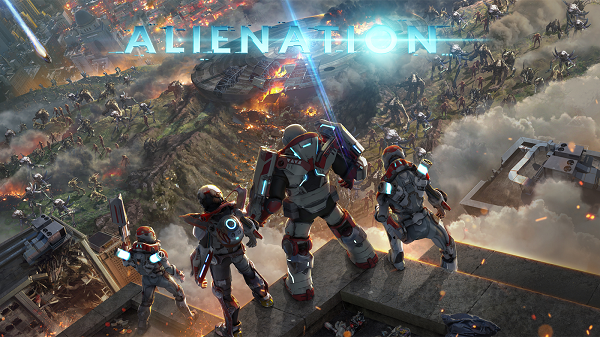 Housemarque is well known when it comes to creating enjoyable arcade style shooters such as Super Stardust HD and Resogun and the company is back once more with what they do best. After releasing a twin-stick shooter Dead Nation once more onto the PlayStation 4, the company is back with a more sci-fi apocalyptic game with Alienation.  Described as a “spiritual successor” to the zombie shooter, is Alienation worth your time?

For quite some time now aliens have been making their presence known on Earth but humanity was kept in the dark as the governments of the world covered up incidents. The time for secrecy soon came to an end however as the alien invasion grew out of control and the world began to fall apart. As such the United World Governments have banked on creating “mechanized infantry” with exoskeletons providing soldiers with special abilities that allow them to stand up to the Xeno enemies that have infested the world. 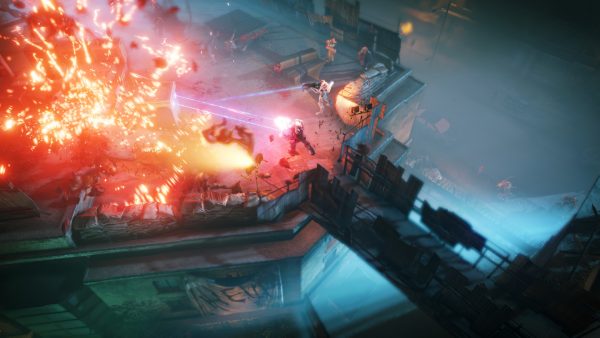 For the most part Alienation tells its story through small snippets as players travel across the world to various hotspots of activity in an effort to push back the Xenos and try to save the world but the story tends to fade off into the background most of the time especially since those who choose to focus solely on completing it will end up completing the core storyline within a few hours. Completing Alienation will power up enemies and multiple runs through the game in a freshly strengthened world offer more rewards and opportunities to take advantage of.

Alienation plays like many would expect from a twin-stick shooter with tight controls and easy to use skills to take the fight to the almost constant barrage of enemies that will be appearing before you. Players will encounter plenty of standard cannon fodder enemies in the forms of zombie-like Mutants that can appear in swarming hordes as random events, small bugs that spawn from lava spewing eggs that dissolve into lava upon death, and then there are enemies that are a bit more threatening than the aforementioned which can usually be dropped with one or two bulltes.

These foes can range from snipers that take aim from off the screen with reticles that players will need to avoid, shielded turrets and enemies that can be circumvented for the best damage or simply powered through, and plenty of other foes that range from incredibly deadly to simply tricky to take down. Everything that goes down in Alienation feels incredibly fast paced and players will often find themselves having to quickly avoid enemy fire, dodging melee fighters, all while shooting while also making sure you aren’t caught in the blast radius of anything volatile that may be caught in the crossfire and explode. 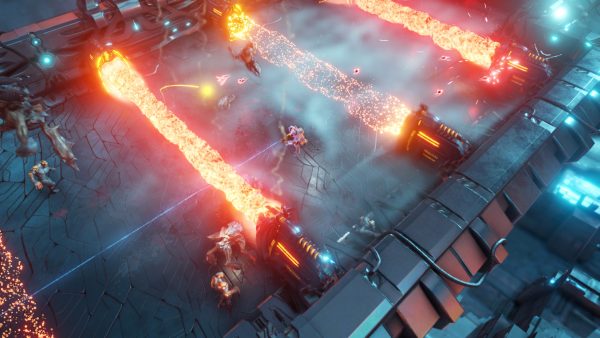 There are three class types that players can choose between when starting their battle against the alien menace. These classes are varied well enough with each one offering special bonuses such as being faster and able to heal, absorb more damage and dish out more damage while also protecting others, and even being able to call in massive damage. As you play through the game you will level up and gain the ability to upgrade your class’ skill tree which is made up of active skills that work off a cooldown and passive abilities. None of these skills are locked in stone and can be modified at any time so players can feel free to experiment, but unfortunately these classes are rather simplistic as they don’t really change too much even when you hit max level.

The other aspect of combat is of course all of the shiny loot that players will be acquiring. When taking down foes and opening chests in the field players will find plenty of weapons and grenades/mines/etc. that can be equipped. As one would expect with this style of loot system, everything comes in various color shades such as green, blue, purple, and orange to show how fancy something is. Many higher rarity weapons will even have slots that can be modified with cores that are also dropped from enemies and acquired from chests.

Players can opt to slot in cores of the same color for special bonuses or simply choose what fits their gun the best and once more these can be removed without any major loss and added to other weapons if you find something better. You can even choose to re-roll the stats of most weapons through resources that are usually gained from scrapping gear that you’ve found useless. Even low level cores can be combined together to create a higher level core that will provide a bigger boost to a weapon. 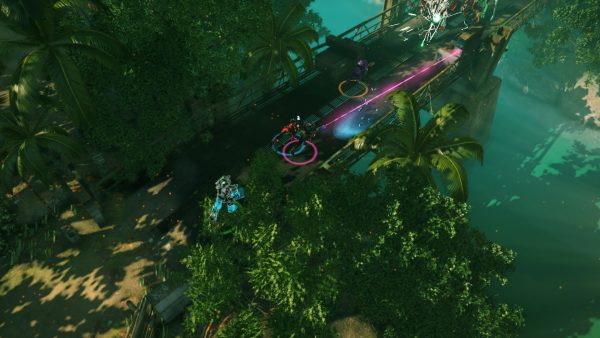 Unfortunately, the entire customization aspect and concept of acquiring fancier weaponry is hampered by the fact that not only does every weapon of the same type look the exact same (minus a few color changes) but they also rarely offer anything special outside of higher stats. Some weapons can unlock the ability to chain lightning between struck foes or even create a boomerang that’ll ricochet around but for the most part you’ll simply be comparing numbers between weapons that all look the same.

Most of the missions players engage in will drop them in an extremely large level with players traveling between revival points as they travel towards their objectives. You can choose to destroy your respawn points for a chance at gaining better gear drops but this also means you’ll respawn much farther back if you happen to die. Death will also serve as a reset to the player’s XP multiplayer which builds up to higher multipliers the more enemies you kill and the longer you survive.

While traveling through these stages players will find that enemies generally spawn randomly around the map and there will even be some special mini-bosses and events that occur from time to time. These are completely optional but provide unique bonuses when defeated. There are even special keys that can be obtained to enter high-level zones where great rewards can be found but not only will players be left with one life in these zones, the enemies will also be incredibly difficult. 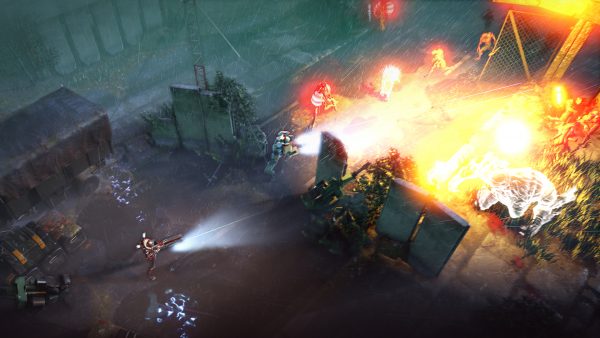 As such it is best to tackle these areas with the game’s fun little co-op mode that allows for drop-in and drop-out allies to join you in missions. When selecting a mission to play you’ll be presented with a list of players also undergoing that mission and you can opt to join them in their mission. There is also the option to invade another player’s game and actually attack them, though this system is entirely optional and players can turn it off entirely if they don’t want someone, who can be potentially very high-leveled, coming in and dropping them in one shot. The action that players will witness while playing with allies in co-op is truly something glorious but it is rather unfortunate that Housemarque has chosen to not include local co-op of any kind which is a big disappointment since this seems like the perfect title for to sit down with a friend and play.

Alienation plays with a top-down style of camera and this provides players with a great view of a battlefield that is littered with wreckage that can often be destroyed and numerous glowing enemies that players will need to take down. The company has really embraced the neon aspect of the game with nearly everything that moves glowing fluorescently while fighting. This creates an extremely polished feeling world that, even when tons of action was happening with multiple players on screen, never experienced any element of slowdown. 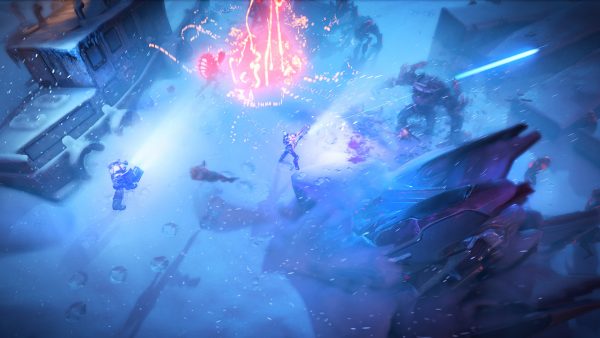 It is worth noting that although the levels are rather large in Alienation, there are only a handful of different locations to actually explore which means that players will begin to grow rather weary of seeing the same environments considering how this game is meant to be played numerous times in a row. As far as the soundtrack goes, Alienation features a fitting collection of background music that works well with the action and the entire game is presented with fully voiced characters that inform the player of their objective.

Alienation may have a few faults when it comes to keeping players interested in the weapons they are getting outside of dealing more damage and the fact that local co-op has been ignored is a disappointing loss but this does little to affect the fact that this is an extremely fun and fast paced twin-stick shooter that will keep players coming back thanks to its well-crafted gameplay mechanics to try out the various classes and strengthen their favorite as well as hop online and cause havoc with others around the world.
Capsule Computers review guidelines can be found here.