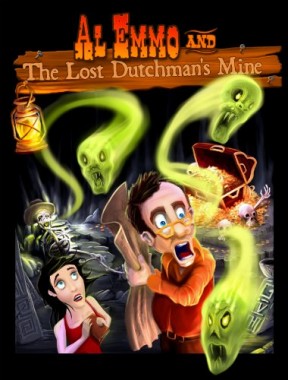 Himalaya Studios are best known for their remakes of classic point and click adventures Kings Quest 1 and 2. Then called AGD Interactive, the studio existed primarily to remake old Sierra adventure games. Renamed Himalaya Studios, the team now has a few original projects under its belt, the upcoming Mage’s Initiation and two Al Emmo games. The first, Lost Dutchman’s Mine, has just been re-released in this enhanced edition after first hitting screens in 2006.

It features a new voice actor for main character Al Emmo and replaces the original 3D cutscenes with 2D animations. Numerous other fixes have been made, adding lines of dialogue, achievements and a scoring system.

Al Emmo is a middle aged virgin with a whiny voice, terrible hair and a desire to get married. In an attempt to convince his parents of his worth, he orders himself a bride and heads off to the West to meet her. When he gets dumped at the local saloon he finds himself stuck in the town of Anozira with little to do and even less to do it with. After poking around he quickly becomes besotted with local beauty Rita, and sets out to woo her with no further ado. Unfortunately Al’s efforts are hampered by the swaggering Antonio Bandana, a suave member of the Spanish royal family who happens to be passing through. 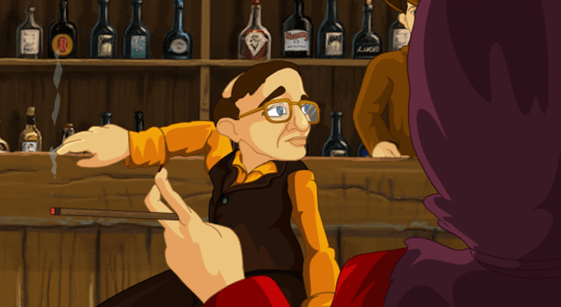 Astute readers will note that there is nothing in that paragraph about any lost Dutchmen or any mines. Al Emmo is split into nine acts, and the Lost Dutchman’s Mine only comes into play somewhere around act seven, and even then the location itself doesn’t feature until endgame. The majority of the game is about Al chasing after Rita, so don’t head into Al Emmo expecting an Indiana Jones style romp -a better title would be Al Emmo and the Desperate Quest for Sex.

The story just doesn’t take off until the aforementioned act seven, and until that time the game feels like a largely pointless journey with an unlikeable and off putting main character. Al is incredibly irritating at first, and many of the other characters are little more than cheap stereotypes or poor rips on celebrities that would have been outdated even in 2006 -hello Pammy Sanderson. 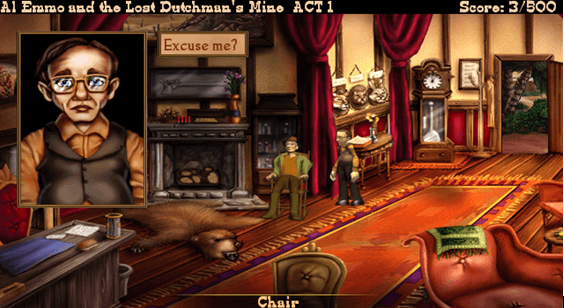 There is a ton of humour in Al Emmo with every clickable object having one or two lines of sarcastic banter attached to it. Good old quantity over quality does come into play though, and for every line that hits the mark there will be a dozen that fall flat. Al does grow less annoying as the game goes on, but he really doesn’t have anything going for him as a character. Any redemption comes from his verbal sparring with the narrator, who does provide some smirk worthy material if not outright laughs. The humour is very much snark orientated, with the odd dose of sleaze on the side.

To give Al Emmo some credit it does take a swipe at various real world issues, whether it be the “termites of mass destruction” that must be destroyed with excessive force or the “cocoa acid water” that the Indian Chief is addicted to. Of course humour is about the most subjective thing in existence, so if the writing tickles your funny bone the experience will certainly ratchet up a point or three.

The point and click gameplay is very traditional. Right clicking cycles through look, touch, speak, and move options, whilst left clicking carries out the selected action. There is an inventory which is accessible by holding a right click, and Al can be made to run instead of walk by double clicking. Players who don’t fancy watching Al criss-cross the same landscape a few dozen times can hit Esc to have him skip to his destination, a mechanic eventually upgraded when Al acquires a map that allows him to fast travel between major areas in the game.

It all works pretty well, with the odd hiccup in transitioning between areas. There are no highlights on objects or transition points, which will be an old school blessing for some. The puzzles do tend to the slightly bizarre, so prepare to reactivate that nineties adventure game logic (or Google a walkthrough, one benefit of playing a game originally released in 2006). Al Emmo is also surprisingly long for an adventure game, with the nine act structure and numerous locations giving it a decent length. 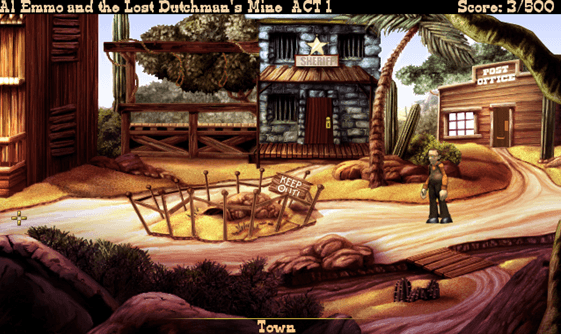 Obviously Al Emmo is not aiming to be modern, instead aping classic adventure game style. The 2D backgrounds and interiors are highly detailed and bring the Western locale to life with ease. Whilst there is no visual highlight on significant objects the challenge level isn’t absurd – everything is clearly visible and the way that NPC’s change between scenes adds a nice sense of immersion.

For some reason Al and the other characters are all in 3D, which takes a bit of getting used to. It is nice to see the main character actually using inventory items, but when the trade off is a walking animation that is as awkward as hell you can’t help but wish the developers had stuck with 2D sprites. Similarly background characters are incredibly simplistic, leaving Al Emmo somewhere in between actual 90’s fare and a modern love letter to a classic genre.

The soundtrack is a nice compilation of Western themed ditties that complement the visuals very well. Whilst there isn’t anything particularly fresh on offer this is a Western we’re dealing with, and producing something new in that setting would be nigh on impossible. The soundtrack also comes packed with the game if you happen to download it from Indie Game Stand.

The audio that will hit the hardest with Al Emmo is the voice acting. Every character in game is voiced, and the over the top Narrator takes his omnipresent duties very seriously. Al has been replaced from the 2006 version of the game, which a quick gander at YouTube will tell you is an extremely good thing.

The chipmunk quality has been toned down significantly, and whilst his voice still takes a bit of getting used to, it is by no means as horrific as before. The rest of the cast are evenly split between annoying and amusing, but again your take on the lisping Antonio Bandana could be very different from mine. 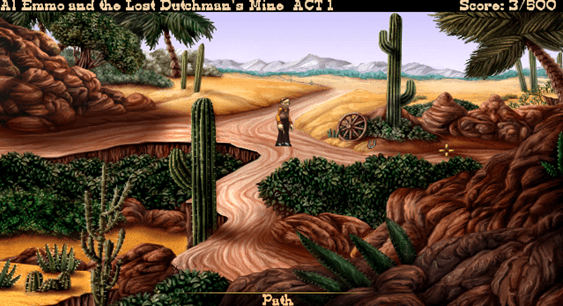 Al Emmo and the Lost Dutchman’s Mine spends too long ignoring its title to be great. When the story gets over Al’s obsession with Rita things improve hugely, but that still leaves hours of gameplay where the plot is unfocused, and neither the humour or the characters are strong enough to make up for it.

The 2D artwork is lovely, the music works well, and the point and click puzzles are decent, but those strengths are tempered by some strange design choices and voice work that toes the line of irritation. As mentioned above, how well your sense of humour matches with that of the game will change the experience massively, but Al Emmo just fell flat for me.