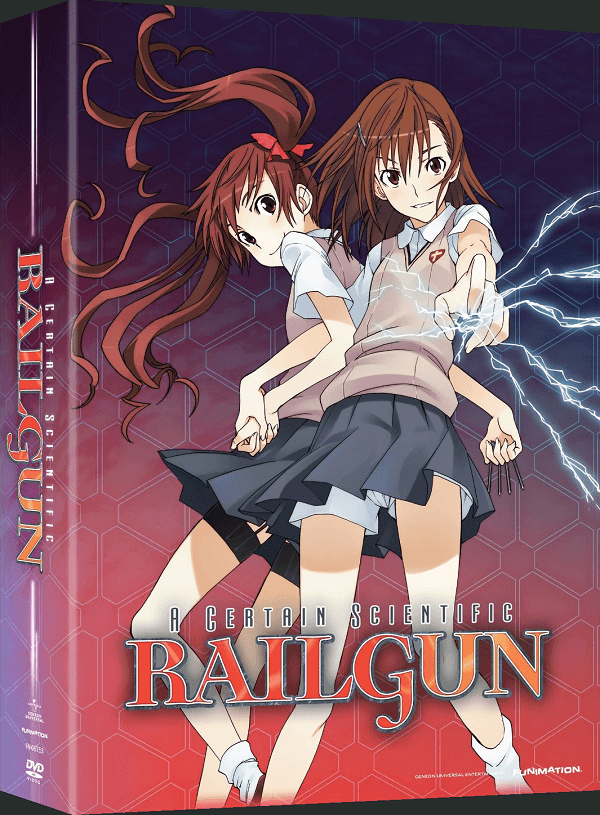 Overview:
Whenever a spin-off of a popular series is announced, many fans begin to worry about the quality of said spin-off. Could said spin-off overshadow the original work or could it be a terrible cash-grab by the studio? No one knows and it is always a risky endeavor. A Certain Scientific Railgun is a spin-off form the stellar A Certain Magical Index series and now that FUNimation has released the first part of Season 1 in North America, does Railgun offer a great experience on its own?

Story:
Those familiar with A Certain Magical Index may recognize the name Mikoto Misaka and rather than following the life and events occurring around Kamijo Toma, the story of Railgun focuses almost entirely on Misaka and the girls that she is friends with. Knowledge of the Index series isn’t necessarily required to understand the events of Railgun, however those who have enjoyed Index will be able to recognize various characters, though it is worth noting that, at least in Part 1 of Railgun’s first season, the storyline has not caught up to any of the events that occur in the Index series, meaning everything portrayed here occurs before Toma meets up with Index. However Toma does appear and play a minor role in Railgun, so newcomers to the franchise may miss out on the this prequel-style relationship building. 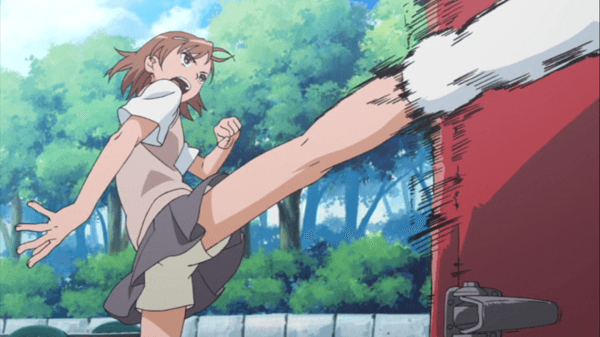 Anyways, Mikoto Misaka is one of only seven level 5 Espers and she is nicknamed the Railgun due to her control of electricity and ability to fire objects at such a high rate of speed that they turn into destructive projectiles capable of destroying anything she wishes. Despite being a level 5 Esper, Misaka is friendly with those around her and has become friends with another girl who attends the same middle school as her, Kuroko. Despite Kuroko’s obsessive and possessive nature when it comes to Misaka, Kuroko introduces Misaka to her other friend and co-worker in Judgement, Uiharu who also introduces the level 0 girl Saten to the group. Thanks to various events, Misaka, Kuroko, Saten and Uiharu become fast friends and the story of A Certain Scientific Railgun follows the various events around this group of girls.

Similar to Index, Railgun follows a rather formulaic approach to storytelling, however unlike Index where the drama took dark turns and the story progressed between large story arcs and mini-arcs in-between, Railgun follows a more episodic format that feels more slice-of-life with bits of action thrown in here and there. You see, Uiharu and Kuroko are members of Judgement, which is an organization that protects the peace of Academy City by arresting criminals that use their Esper abilities to commit crimes. 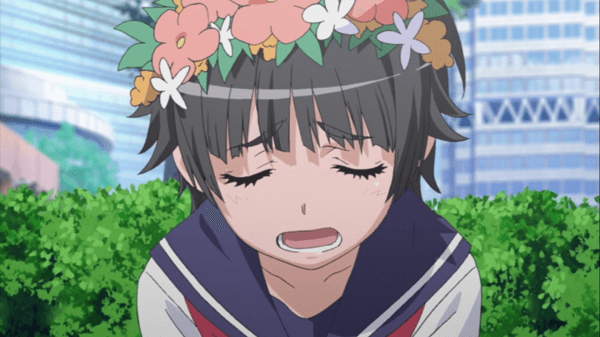 Between solving cases and taking down criminals, the series focuses on the girls themselves and the fun times that they spend together. While this means that the series isn’t as plot heavy as Index, Railgun manages to pull this off quite nicely thanks to the charming personalities of the girls. Kuroko’s exuberant perverse actions towards Misaka aside, each of the girls interact well with one another and even Kuroko’s comedic fan-service can be welcoming at times.

While most of Season 1 Part 1 lacks focus by functioning on an episode to episode basis, it becomes clear that the number of Esper related crimes has been on the rise and Judgement’s database of Esper users has become increasingly unreliable when gauging the levels of these criminals. As such, when rumors of  a “Level Upper” begin to circulate, Judgement and the girls may be in for more than they bargained for, especially when one of their own falls victim to the device. 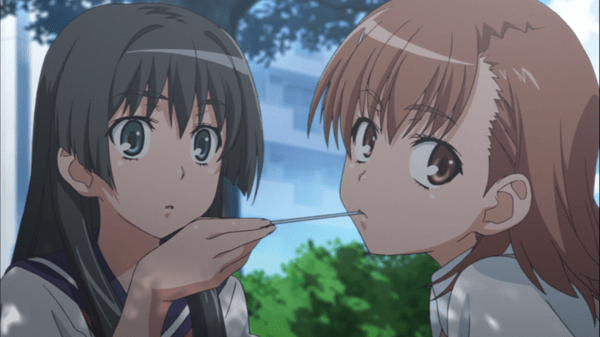 Interestingly enough, Part 1 of Railgun’s first season ends rather concisely with no cliffhanger, though with Part 2 being released the same day as Part 1, this wouldn’t have been an issue anyways. That being said, the story of Part 1 offers a decent introduction to the girls by presenting viewers numerous episodes with cute girls doing cute things as well as humorous character interactions and then offering various dramatic situations that culminate in a master-scheme that highlights some of the sinister science taking place in Academy City.

Visuals:
A Certain Scientific Railgun was originally animated back in 2009 and thanks to various issues on the Japanese side of things, FUNimation was forced to delay the release of the series for a few years before this eventual 2013 release. Despite being animated four years ago, the series is impressively handled at times. It is worth noting however that the release is fairly inconsistent with its visual quality, with some sequences being impressively well animated and the character’s being highly detailed and shadowed well, while other sequences can be rough looking, like J.C. Staff had issues allocating funding for specific episodes. 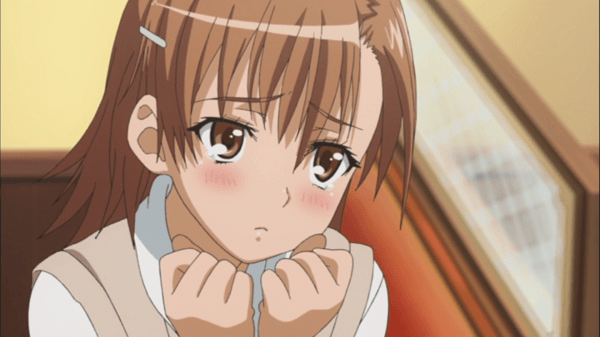 That being said, the action sequences are often the most impressive and real care has been given to making sure that the environments are impressively detailed. Fans of the original Index series will be able to recognize various areas and it is worth noting that Railgun features some of the most adorable facial animations I’ve seen. It is interesting to note that while some may find that Railgun contains a high level of fan-service, it is actually quite tame with no actual nudity. Usually this fan-service is delivered by Kuroko’s actions towards Misaka or Saten’s actions towards Uiharu, but it remains light and humor based so few should find issue with it while fan-service lovers will appreciate these moments, especially since they are often quite hilarious.

Audio:
As one may expect from a FUNimation release, A Certain Scientific Railgun: Season 1 Part 1 has been given a complete English dub and the company has provided the Japanese voice track as well. The voice actresses and actors from Index have retained their character roles for Railgun while the new characters have been voiced well enough, though Brina Palencia as Saten does take some getting used to. It is interesting to note that while the English dub is nicely handled, the original Japanese voice work is very impressive, especially when it comes to Kuroko’s original voice actress Satomi Arai, so viewers may want to listen to both tracks to appreciate the series. 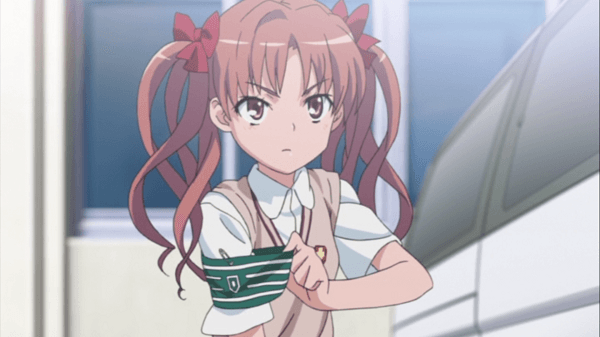 As far as background music goes, there are a number of themes that are played during suitable moments in the series but they tend to be very forgetful. That being said, the opening theme, “Only My Railgun” by fripSide is a joy to listen to and I found myself watching the opening theme and listening to the song for every episode thanks to the song alone. The ending theme, “Dear My Friend” by Elisa is a nice soft ending theme focusing on the girls, but it is fairly unimpressive.

Extras:
The bonus features offered for A Certain Scientific Railgun Season 1 Part 1 are pretty much what fans have come to expect from a FUNimation release. We have a clean version of the opening and ending themes, trailers for other FUNimation products and two episode commentaries.

The first commentary is for Episode 3 and it features the aforementioned Brina Palencia, the voice of Saten, and Cherami Leigh who voices Uiharu. These two discuss Uiharu and discuss the various events that take place during the episode. While not very comedic, it is nice to get a look at what these two thought of the series. 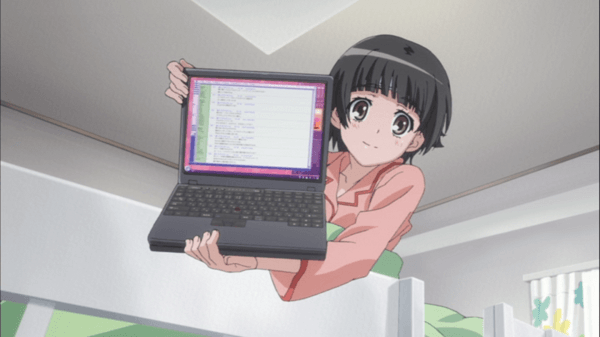 As for the second commentary, this time for Episode 6, we have Brittney Karbowski the voice of Misaka and Alison Viktorin who handles the voice of Kuroko. The two talk about the episode in a manner similar to the other commentary and also discuss the relationship between the characters they voice.

Overall:
A Certain Scientific Railgun may not be as plot heavy as A Certain Magical Index, but Part 1 manages to offer a mostly light-hearted experience that still has its share of drama mixed in with a charming cast of characters. In fact, the four main girls and their interactions with one another are the biggest highlight of Railgun. With Part 1 ending things on a rather solid note after successfully introducing the cast and having viewers fall in love with them, the biggest question is, what will viewers find in the second half of season one?