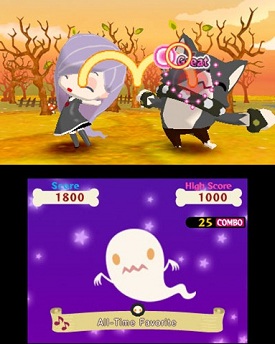 Feel like your Nintendo 3DS is missing a bit of music and rhythm in its relatively tiny game library? Well then perhaps you may want to take a look on retail shelves as Natsume has released Gabrielle’s Ghostly Groove 3D today only on the 3DS. Though the title was also released on the Wii as WiiWare previously, this is the first retail version of the title.

In the game players will take the role of Gabrielle, a girl who happened to sneeze out her soul and in an effort to retrieve it, travels to Monsterville. There she seeks out help from those there through the power of dance. This of course means that there will be plenty of tapping and sliding to the music to be had.