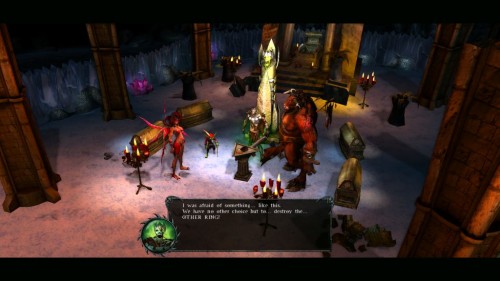 Dungeons – The Dark Lord is the standalone add-on to Dungeons, a game for the PC released by Kalypso Media, where you can “be evil and feel good”.  New features in Dungeons – The Dark Lord include a new fully voiced single player campaign of about 8 hours of gameplay; four multiplayer modes for up to four players (Deathmatch, Pinata, King of the Hill and Survival); an ice crystal cave dungeon setting; over 90 new gimmicks; playable bosses in multiplayer modes; and a new Dungeons Map Editor.

In Dungeons, an evil scheme developed by an execrable evil ex-girlfriend befalls on our hero and is now at the top of the dungeon pile – in this world, top apparently means bottom – and it couldn’t get any worse from there! He now has to make his way back down the dungeon levels and up the underworld hierarchy by killing heroes who get a kick out of invading dungeons and get his sweet revenge! You won’t know what’s hit you evil ex-girlfriend!

For more information on Dungeons and Dungeons – The Dark Lord, visit http://www.dungeons-game.com/content.php