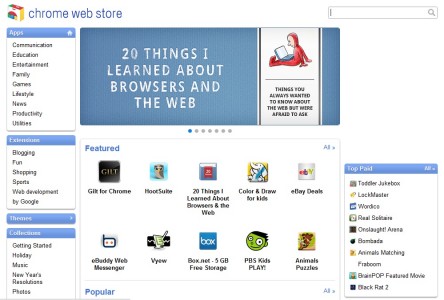 Yes, you heard it right. A web store for the browser, by one of Apple’s largest competitor. It looks like this is going to be Google’s attempt to take on Apple’s Mac App Store, which is scheduled to open before Christmas this year. The Chrome Web Store is just opened 2 days ago, on the 7th of December. It mainly builds on its previously available extensions, themes and utilities for their popular browser. Basically, they made everything downloadable for the Chrome under one store, and rebrand it as the ‘Chrome Web Store’. At the moment, paid apps on the store are only available for the US, but they promised to expand it internationally in the near future (early next year).

I see several interesting games on it, like Plants vs Zombies which has already infiltrated every device possible. Other than that, Electronic Arts also brought a lot of games to the Web Store to reach out to the gamers on Google’s popular browser. To name a few, FIFA Superstars, Poppit and Mirror’s Edge 2D. Apart from games, the store also has apps for Communication, Education, Entertainment, Family, Lifestyle, News, Productivity and Utilities. Check them out if you happen to have Google Chrome installed on your computer. If you happen to be like me, who never turns off her laptop and left her Chrome running for weeks, restart it. You should be prompt to install the Chrome Web Store. Have fun!

get the shank soundtrack for free