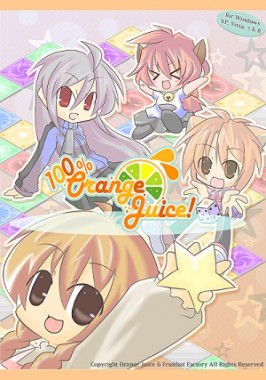 100% Orange Juice is a combination of board game and deck building that has players battling for stars and collecting cards. The game plays like a traditional board-game like Chutes and Ladders or Yahtzee, in that it takes little skill to play successfully and has little tactics behind each movie.

The deck building and card purchasing is a interesting aspect but doesn’t serve much of a purpose as I felt cards didn’t hold a large amount of weight to winning the game. The cards themselves weren’t quite useful and I found myself randomly putting what I could in my deck; mostly trap cards. The cards, especially trap cards, led to a fun bit of trolling; forcing other players and the CPUs to trigger cards that move them around the map, make them loose stars, turns, and cause a small amount of mayhem along the way. 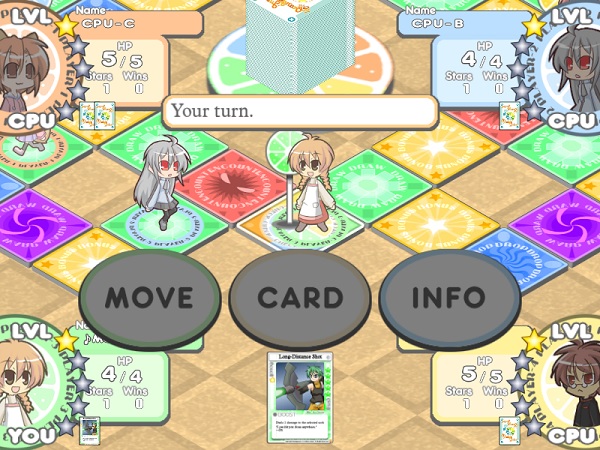 100% Orange Juice features cast members from the developer Orange Juice’s other games such as Acceleration of Suguri, Sora, and Rockin Android. For those who haven’t played the games from which these cameo characters hail from, you’re not alone, but for others this could be a enjoyable treat. The game itself is based on collecting stars and winning battles against the other players and enemies on the board. Which all depend on random dice rolls. Each player takes a turn, walks counter-clockwise around the board, and either draws a card, gets bonus stars, or battles an enemy.

The combat system seems pretty random and points and totals go by too fast to really get what’s happening. Again your attacks and defences are based off of rolling the random dice again… though it seems to not have much of an effect. It seems like the two outcomes of an attack are -1 health, or ALL OF YOUR HEALTH. Which are the two most common outcomes, no matter your roll. These things can be effected by cards you’ve drawn from your deck. The cards themselves aren’t different from cards you’d see in many other trading card games; healing you or adding attack damage, but like I mentioned before, the game can be played easily, without using any cards at all, and some of the cards affects are barley noticeable. 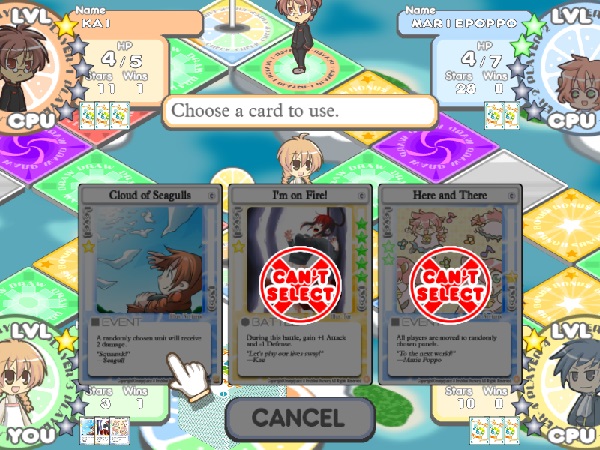 At times I found myself drifting off-screen, occupying myself with something else until my turn arrived and clicking through my turn without much hesitation or thought and seemed not to care weather I won or lost; as nothing is truly at stake. At the end of a round you are awarded the stars that you collected during the round as well as given multipliers for difficulty and other variables. You can use those stars to purchase new cards, at random, from a pack of one per 180 stars.

You can get multiples of cards you already have and there’s the chance that you’ll NEVER get a certain card, which seems discerning. The gameplay is definitely more casual than casual than strategy and the card system could probably been left out entirely. Most, if not everything, in 100% Orange Juice seems random and nothing seems like it fully fits together; some enemies you face on the birds are seagulls, others are mechanical orbs, and even a mud-monster boss and those encounters don’t feel like they belong in a board-game like this. 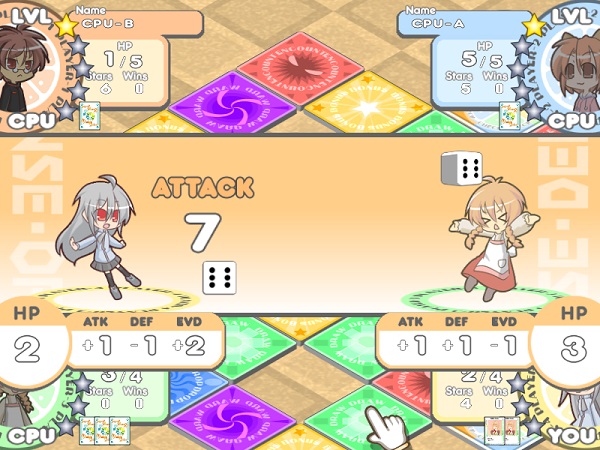 Your character also has a health meter; ranging from 4-6 points usually. When your character dies, you must roll (of course) a random dice to see if you can get back up. On the first roll you must roll a five or above, if you miss that, you must try a four, and then three, and so on. This can lead to frustration where you are skipped for three to four turns before being able to roll yourself back up. These things amassed together lead to a frustrating and confusing mix of casual and random mechanics that have no true place together. There is no true set of rules or style of play for %100 Orange Juice as you can’t recreate a strategy two games in a row, due to the level of random events. It’s also quite difficult to plan a move one step ahead, let alone strategically play a whole round.

The menu system isn’t much to look at, aside from the background and theme that fits in the juicy style, it’s bland and dated. The board itself also isn’t visually striking, though it gets the point across. The characters themselves are well done, though their animations are sporadic and, again, dated. What could be a nice set of animated moves and expressions are replaced with a static photo of each character that vibrates when its their turn to move, roll dice, or attack; all they do is vibrate. From a non-critical view, the casual nature of the game added with the bright and sunny vibe gives 100% Orange Juice an fun feel and these visuals fit that theme. 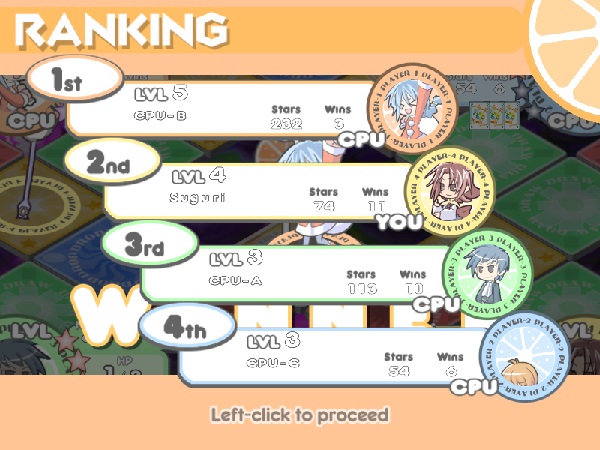 The music, sound effects, and audio cues all stand out from the more casual play of %100 Orange Juices. The fast paced trance music, high pitched effects, and rather insentient become excruciating for anyone who wants to lay back and play with friends. In fact, it feels like someone blasting rave music, while dancing on your keyboard, while spinning their night away with glow-sticks. It’s all pretty out of place with the turn-based strategy element that %100 Orange Juice tries to fill. Everything from the Visuals, Gameplay, and Audio feel rushed. 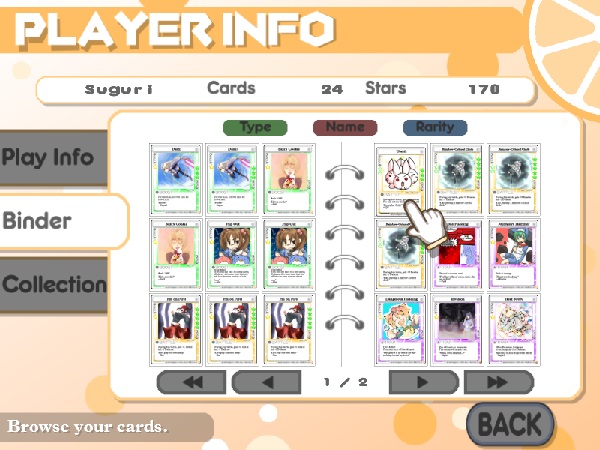