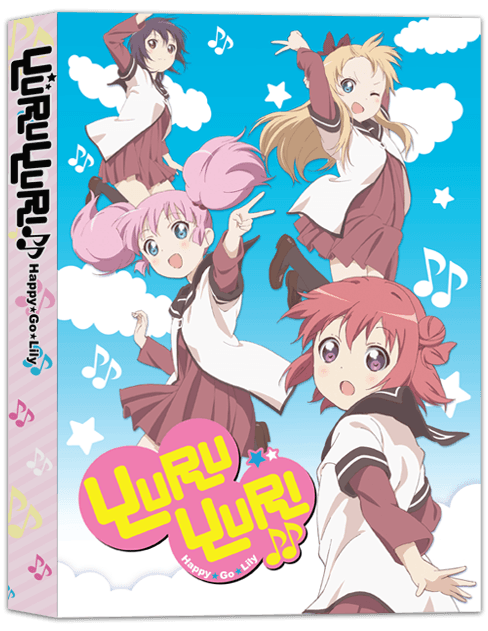 Overview
Everyone has a different way they like to unwind or relax and with anime there are plenty of different genres and sub-genres for viewers to enjoy. One of these happens to be slice of life style shows and while there are various takes on the genre, most slice of life anime tend to be comedies, with a number of them revolving around cute girls doing cute things. YuruYuri’s first season, our review of which can be read here, was brought to North America by NIS America last year and it excelled at providing humor and enjoyable characters and now that the second season has been released, is it as good as the first?

Story
For those who haven’t picked up the first season, YuruYuri follows a group of middle school girls as they form the “Amusement Club” in the abandoned Tea Club building. The Amusement Club consists of Akari, Kyoko, Yui, and Chinatsu and the name of the club is pretty self-serving since there is no reason for the club to exist other than to provide these four girls a place to joke around and enjoy themselves. 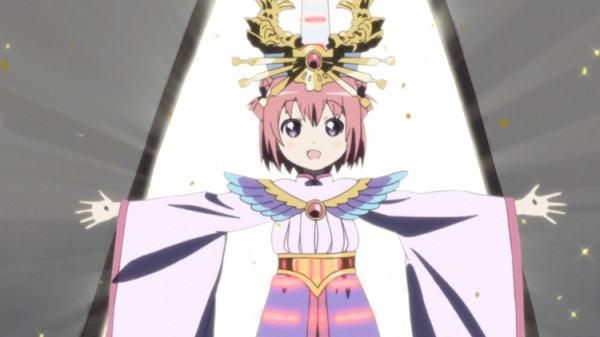 Despite the fact that the club doesn’t really have a purpose, the Student Council, consisting of Ayano, Chitose, Sakurako, Himawari, and Rise, though she really doesn’t appear often, doesn’t have much of an issue with the club over time and now at the start of the second season everything is back to the status quo that never really changed during the first season. You see, YuruYuri doesn’t have any sort of running storyline, as it is more prone to running jokes, and it instead follows the daily lives of these middle school girls and the strange situations they get into.

What makes YuruYuri so charming are the characters in the series. You see, while we have seen many of these character types in the past, they are all taken to an exaggerated and highly entertaining point in YuruYuri. They all have ties to one another in a specific way and these ties are used for not only comedic purposes but a few touching moments as well. 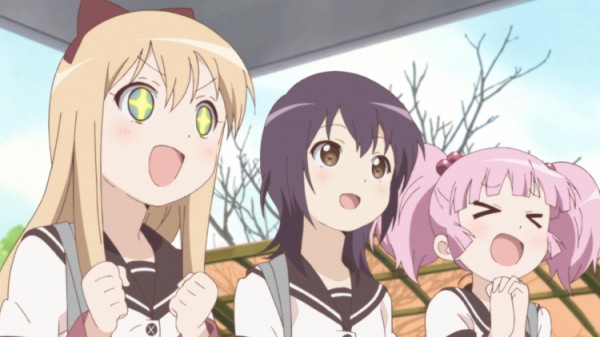 From the Amusement Club we have Kyoko, a selfish but highly intelligent otaku girl that causes trouble for Yui but still cares for her as a close friend and loves Chinatsu thanks to her appearance being similar to Kyoko’s favorite anime character, Yui, a down to earth and efficient girl who plays the straight woman to most of the group’s antics, Chinatsu, a sweet looking girl that can be quite sinister at times and has a major crush, bordering on obsession, with Yui, and finally Akari, the supposed main character that is often the butt of most of the jokes in the series but remains highly energetic and peppy despite the troubles she faces. 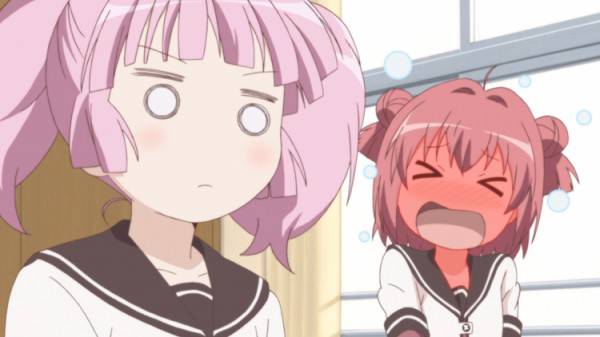 These four girls’ personalities mesh so well together that a lot of the comedy that comes off the group is very enjoyable and hard not to laugh at. That being said there are a few running gags that carry over from the first season that seem to have lost a bit of their charm this time around, though along those lines the fact that they have made Akari’s lack of a presence even more of a focal point in her character has made her more hilarious than ever before. That being said, compared to the first season I found myself laughing a bit less this time around as a few of the jokes became overused.

That doesn’t even touch upon the Student Council consisting of Ayano, who happens to be a tsundere with feelings for Kyoko, Chitose, a girl with vivid fantasies about Kyoko and Ayano, and the pairing of Sakurako, an idiot, and Himawari, the responsible and smarter of the two friends. Interestingly enough, this second season gives the Himawari and Sakurako love and hate relationship a lot of focus as we not only get to see how the two interact when they are alone, a bit about their past, but even a few members of their family. 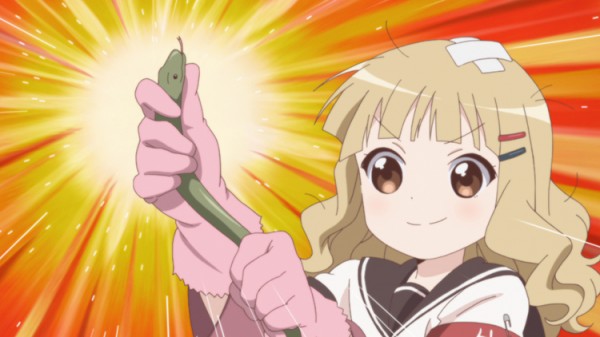 As mentioned earlier, a few of the side-characters from the first season receive a bit of the spotlight this time around. That being said, the basic focus of YuruYuri Season 2 remains very much the same as the first season. With cute girls doing cute and almost always hilarious things together for twelve episodes. The yuri aspect is played very lightly and usually only is an aspect in the back of the viewer’s mind while they watch the antics of these girls unfold over the course of the season unless it is used as part of a punchline.

Visuals
YuruYuri continues to be a very charming and brightly colored anime with a lot of cute designs to offer. Although the school uniforms are rather basic, the girls are unique looking enough (outside of one for comedic reasons) to stand out and each character’s wardrobe outside of the school is rather large so thankfully we get to see more interesting character designs outside of the plain school uniform. 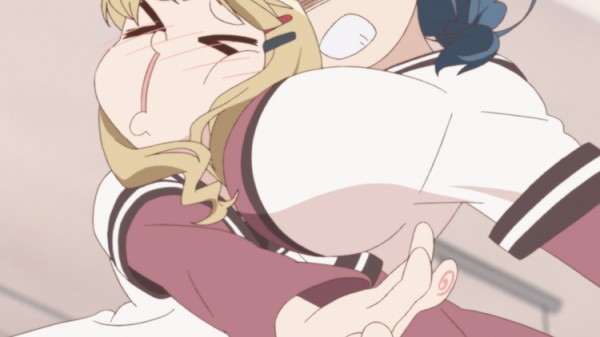 YuruYuri Season 2 appears very similar to the first season in almost every aspect though there does appear to be some better animation techniques at work as a few scenes throughout the season looked far better than anything presented in the first season. Also, the humorous exaggerated faces that Akari, Sakurako, and the rest of the cast make throughout this second season appear to be used a lot more, which is for the best as they usually always make me laugh.

Audio
Since this is an NIS America release, YuruYuri Season 2 is only presented with the Japanese voice track and English subtitles. This is perfectly fine however as the Japanese voice actresses work great together and fit their characters perfectly and an English dub might have caused a few jokes to be lost in translation. 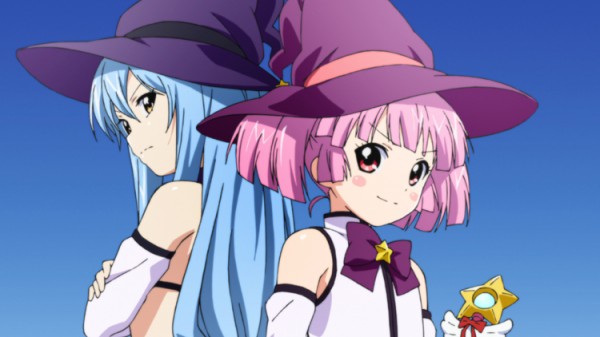 As far as the background music goes, it is rather standard slice of life fair though there continues to be a theme used for each of the girls played during the mid-episode eye catch scenes. The opening theme for the second season might not be as catchy as the first, but it is still very enjoyable and is sung by the Amusement Club members again while the ending theme is also sung by the voice actresses and is just as enjoyable as the opening.

Extras
YuruYuri Season 2 has been given NIS America’s signature ‘Premium Edition’ treatment which means that along with a number of on-disc extras, we have some great physical bonuses as well. The on-disc bonus features are two clean opening themes and two clean ending themes, B-Side previews which are the same episode previews from the season, but with alternate dialogue, trailers for other NIS America anime and a clean episode 11 prologue, included as the episode has some Japanese credits played over the scene, though it lacks subtitles. 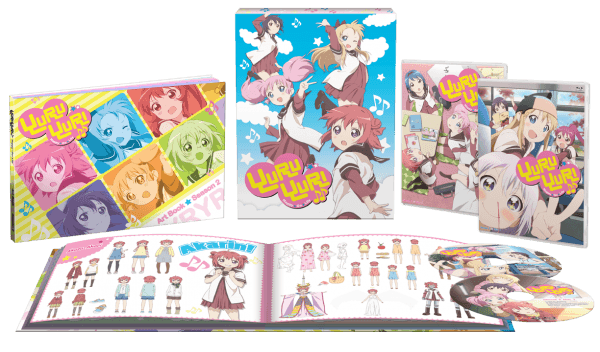 Also found on-disc are six ‘Video Art Book Featurettes’ which are roughly ten minutes long a piece and they each follow a different girl, or pair of girls from the cast. The video presents us with basic artwork of the girls and proceeds to present viewers with sketchwork and the animation process for various scenes the girls appeared in going all the way back to the first season.

As far as the physical bonuses go, we have a glossy slipcase featuring artwork of the Amusement Club members on both sides and the hardcover art book. The art book begins with episode summaries from one of the girls appearing in said episode, followed by character art for each of the main girls in the cast. Then there are sketches of various objects presented in various episodes followed by a number of pages of original color artwork ranging from half a page to full page images of the cast.

Overall
YuruYuri Season 2 takes the same structure fans loved from the first season and kept moving forward with it while not only introducing new gags and highlighting some of the side-characters but also making us laugh all the time. While some jokes became stale over the course of this second season, the series has plenty of tried and true gags left to make viewers laugh and even a few new ones as well. YuruYuri continues to be a delightful and enjoyable slice of life comedy that can become addicting if watched all at once, partly due to the light-hearted comedy but mostly due to the series’ charming characters.