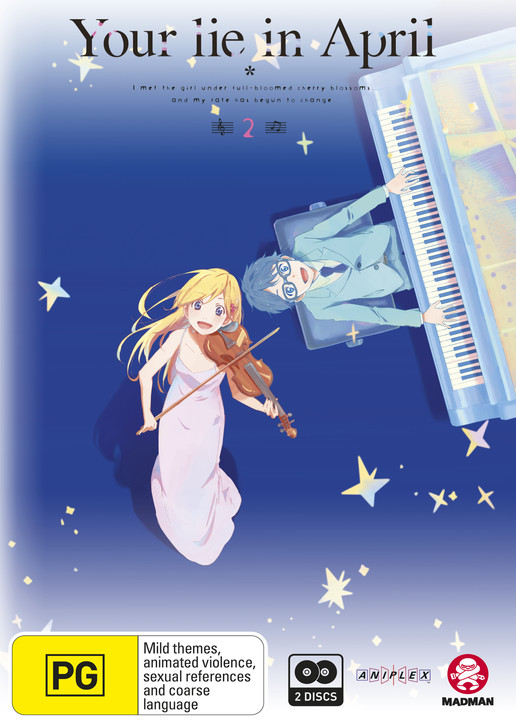 Your Lie in April Part 2

Kaori recruits Kousei to be her accompanist once again, this time for a gala performance. The song she chooses to play brings back painful memories for Kousei, but he gradually prepares to perform the piece. When the time comes to walk on stage, however, Kaori is nowhere to be found. Tsubaki later finds out that Kaori collapsed again and is in hospital. Kaori tries to convince everyone that she is okay, but eventually reveals to Kousei that she is seriously ill. 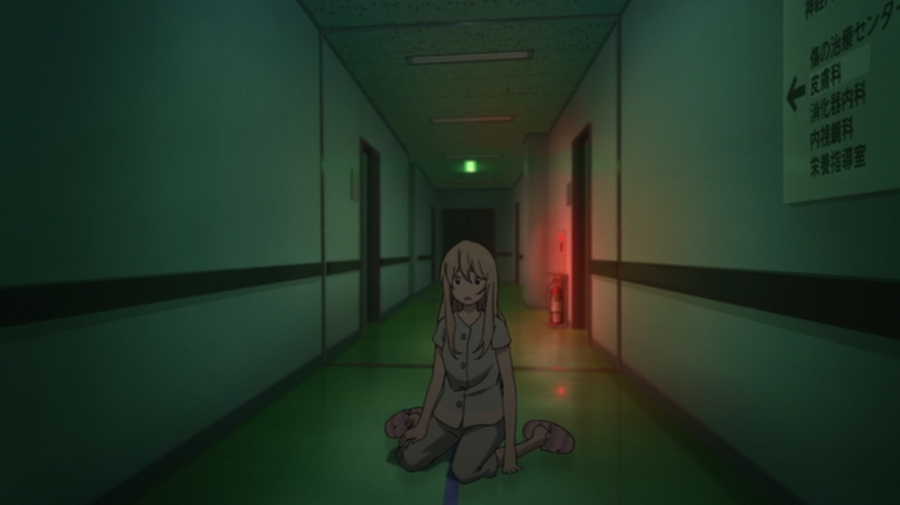 Kaori Miyazono is considered by some as a kind of ‘fairy’, a type of character who only exists as a plot device created to take a character on a journey of growth and discovery. When thought of in this way, she is not altogether dissimilar in purpose from Hana N. Fountainstand in Hanayamata. Kaori is definitely a human and not a fairy, but the comparison, unfortunately, comes with evidence to support it. She has her own hopes, dreams and interests, which is why it is so incredibly disappointing that she is relegated to the role of supporting character for much of the second half of Your Lie in April. Instead of the autonomy and determination she previously possessed, she spends the majority of these 11 episodes lying in a hospital bed waiting for ‘Friend A’ to visit. Her illness is never fully explained, and while there are reasonable fan theories about it, this is part of the problem. The full story behind her life is deemed unimportant by author Naoshi Arakawa. Kaori managed to get Kousei to play the piano again and even inspired him to take part in a gala performance. She managed to get him to face his demons and say ‘goodbye’ to his mother, but she spends several episodes in the background now that she has served her intended purpose. It is nice seeing Kousei grow, but Kaori is a much more developed character and a much more interesting and inspirational character than Kousei is in many ways. She could have been the star of the show, but winds up being its tragic plot device. 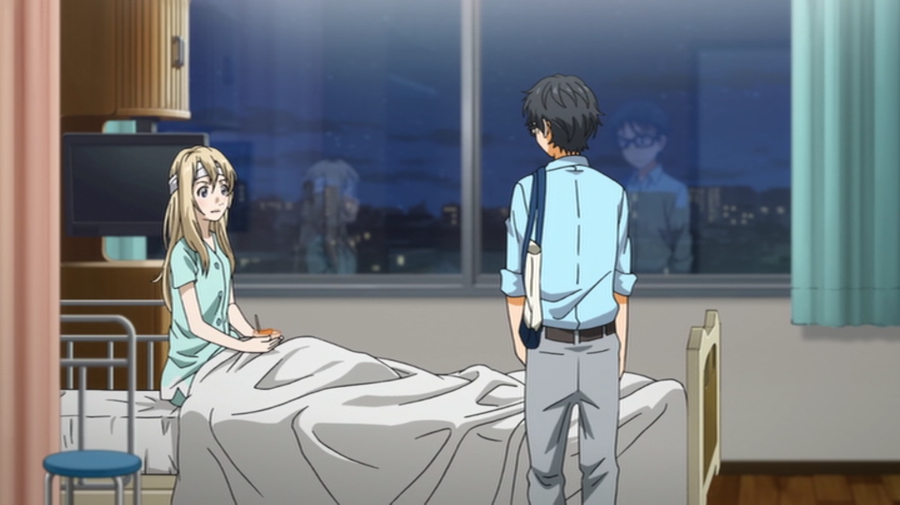 More recurring characters are introduced. Kousei ends up teaching a middle school student who happens to be Takeshi Aiza’s younger sister. She has sinister purposes for becoming Kousei’s student, resulting in her coming across as an annoying character who takes away valuable screen time and Kousei’s time from Kaori. When the two finally work together, she becomes a more reasonable character, as does the other middle school student who runs into Kousei. Takeshi and Emi both contribute more than expected in these episodes, although Takeshi goes back to being annoyingly antagonistic to Kousei when he sees him with his younger sister. This behaviour seems as if it is meant to make up a part of the ‘humourous’ side of the series, but the humour almost consistently falls flat.

Kousei himself goes back to being stubborn too, this time with his reluctance to see Kaori and his reluctance to talk to her when he does actually visit her. He does inspire her to try to play the violin one more time, leading to moving scenes depicting her trying to regain her physical strength. It can be hard to watch these moments, and harder still to watch the incredible, final performance in the last episode. By this point, viewers will remember that the show is centered on a lie told in April and will likely have suspicions as to what the lie actually is. Clues are given throughout the series, and much more directly so in these episodes. When the lie is finally revealed, it all makes sense. Unfortunately, the only thing that reaches a definitive end is Kaori’s story. The relationship between Tsubaki and Kousei is left ambiguous even after Tsubaki reveals her true feelings. 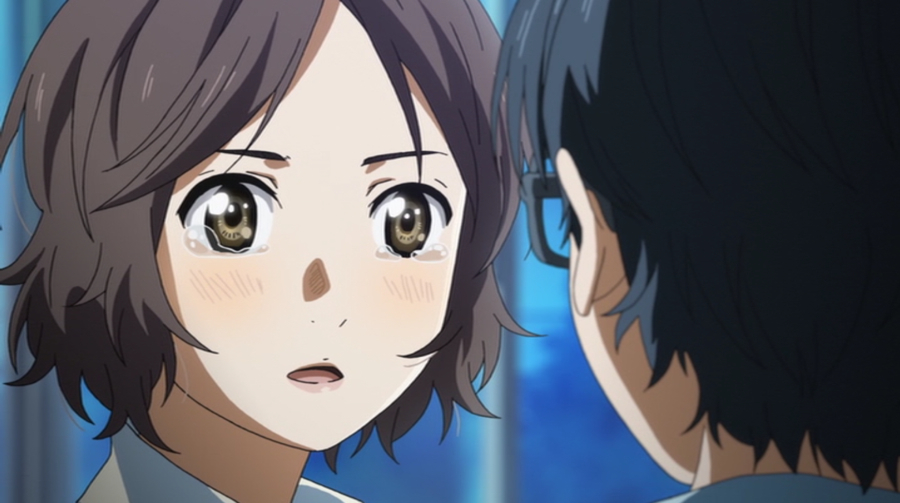 The artistry is consistently beautiful and the animation is fantastic. That is, when a performance is animated to begin with. There is a significant increase in the use of still shots, which occur during musical performances by people other than Kousei. It also increases simultaneously with the increased reuse of dialogue from scenes from the same or previous episodes. The same reference to a previous scene is sometimes used multiple times in the same episode, making it seem as if there were budget issues. The use of 3D CG visuals stands out when used for the backgrounds, and not in a good way. The frame rate of some performances is also limited, except in the final performance.The emotional intensity may have increased in this half of the series, but the visual quality has not really improved. However, the final performance in episode 22 stands out as the most beautiful and powerful sequence in the entire adaptation. The animation for that performance is incredibly fluid, making up for the lack of good animation in some earlier episodes.

The new opening song is catchy and nice to listen to, but fails to capture the same level of energy and excitement that the first opening song had. The ending song has a fittingly sad tone, but again is not quite as memorable as it could have been. Masaru Yokoyama’s background music continues to be as fantastic as it has been up until this point, and the musical performances get better and better as the show reaches its climax. It is disappointing that Kaori has very limited opportunities to perform in this half of the series, although Kousei is more confident in playing the piano now, meaning that we hear more solid performances from him. The voice acting is top-notch throughout; Erica Lindbeck portrays Kaori’s emotions brilliantly and Max Mittelman does the same for Kousei. 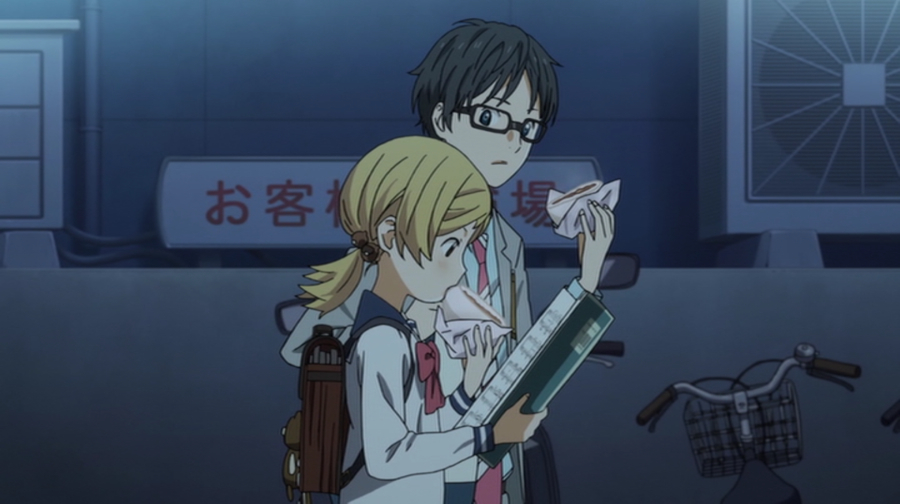 The extras include the textless animation sequences for the second opening and ending, inappropriate but entertaining bloopers from the recording of the English dub and English commentary for episode 22. This commentary does not contribute much more than what was covered in the commentary for episode 1, but it does give an insight into how the actors felt about the show and their performances for it. The OVA episode is not included in this release.

Your Lie in April concludes as one of the most emotionally powerful series to come out of Japan in a very long time. It depicts teenage relationships and struggles without watering down even one single element. Kousei’s struggle to come to terms with the likely loss of the second most important person in his life is painful to watch, not only because it hurts Kousei but because it hurts Kaori as well. Kaori’s fight for life is even more painful to watch. It is without a doubt one of the most moving events in any anime series. This series may hit home very strongly for some, and is likely to bring tears to the eyes of most viewers. This is a tragic story, and it presents a powerful message about loss and moving on. It may not be perfect, but it is about as emotional as anime can possibly be despite the large number of flaws present. The biggest disappointment is the shift of Kaori from main character status to supporting character status for many of these episodes; she only returns as a main character as the story moves towards its climax.
Capsule Computers review guidelines can be found here.

A powerful ending to a beautiful series, but not without stubborn behaviour and bad attempts at comedy along the way.
9