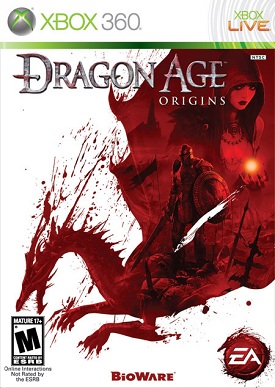 Dragon Age: Origins is the latest RPG by Bioware listed for the PC, 360, and PS3. The first thing I will mention, is if you hate a dialogue filled world and have no patience for it, you will lose a lot in this game, as the speech of characters plays a huge role in not only playing the game, but enjoying it as well. The game takes place in Ferelden, a mythical country currently locked in a war with the “Darkspawn” which, in essence, look like creepy smiling orcs giving them a darker twisted look. You can choose up to six possible origins depending on race and class. This origin will continue out throughout the game changing the way you will play the game as opposed to a different origin. For this review I chose to be the generic Human Noble. Either way, you will meet a man named Duncan, and he will invite you to join The Grey Wardens, a group of individuals who have fought off “Blights” of darkspawn before and that is what kicks off a beautifully scripted story that will have you absorbed and actually caring what happens next in your plot.

The choice system is different than any Bioware game to date, as there are no good or evil choices, no morality bar, and before you begin to think of Mass Effect, there is no Paragon/Renegade bar either. What DA:O does instead, is gives you choices that are more “grey” in nature. There is no right or wrong way to go about solving the problem; rather there are differences of opinions. This can result in your teammates despising you for your decisions, while others in your group will love you for doing those such things. It is an interesting mix, making it more realistic, as you are not just some malevolent being doing evil for the sake of being evil. These choices continue to affect the game after you make them so you must think carefully before every decision, knowing that you are slowly changing your world with each one.

The combat in DA:O returns to Bioware’s root with a mix of pauses to queue up moves, and real time combat. This allows you to plan out your entire team’s plans before even landing the first blow. You and your team will have certain spells, and talents that enhance your body, or harm your opponents, such as shield bash, or restoration magic. There is also a tactics menu where you can set up how your team reacts to certain situations. An example would be a tactic I set for my Human Noble. If he hits below 25% health, he will automatically shield bash the nearest opponent down and drink a health potion. The Tactics Menu works great with your team as it allows you to further plan your attacks and prepare for most situations. Another thing that should be mentioned is that this game is tough. Even on normal one must rely on tactics and once and a while pausing the game or you will be overwhelmed immediately. This game is not built for the “casual” or beginning gamer so take that in mind when deciding to buy it or maybe skip it for now.

A problem with this game however, is the graphics. The graphics look as if they belong in the last generation, but since the game has been in development for quite a while and they did such a good job with most of the game I am willing to let this slide a little. The music that accompanies the game, however, is amazing. Whether it is a heated battle between human and Darkspawn, or a simple sad song to accompany death, the music fits the game like a glove and gives the environment and cut scenes more depth.

In conclusion, the game lives up to Bioware’s reputation for a well made RPG, though it may prove to be long winded for many gamers. If you are a fan of pretty graphics and perfect models, you may want to avoid this completely. This, however would be a terrible reason to skip a game I believe could be a Game of the Year contender, and so I recommend this game for fans of Bioware and RPG fans alike. It has a memorable story, tough choices and amazingly fun combat and should prove a challenge that you may be looking for.