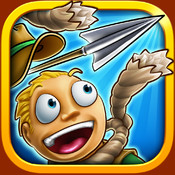 Overview
Everybody loves a hero. That person who rides in out of nowhere and saves the day. Well it’s your lucky day. It would seem that some hoodlum is hanging people or some such evilness. Time to grab your trusty bow and save some lives. Now, usually in these stories of heroism the innocents aren’t lined up for rescue, but beggars can’t be choosers. 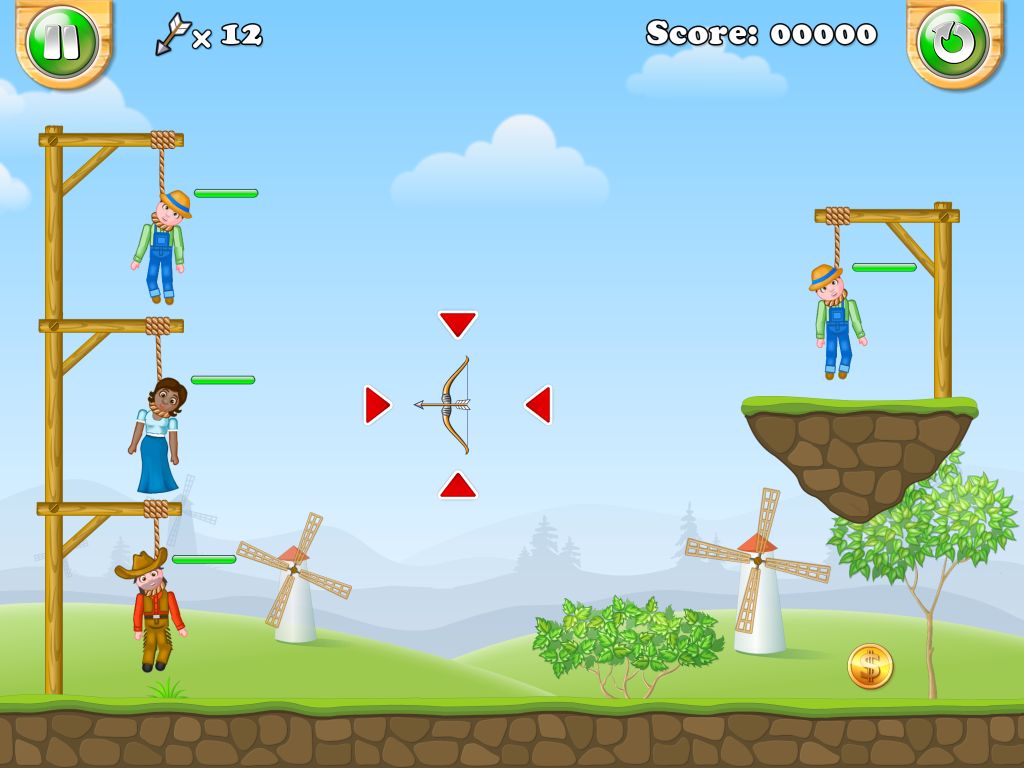 This doesn’t look too difficult…

Story
You are some kind of disembodied bow and it is your duty to rescue people from their horrible fate. Are you good enough to save them in time? Welcome to the World of Gibbets.

1. A Kind of gallows; an upright post with an arm projecting from the top, on which, formerly, malefactors were hanged in chains, and their bodies allowed to remain as a warning.

2. The projecting arm of a crane, from which the load is suspended; the jib.

Gameplay
As mentioned, it is your goal to save the citizens currently hanging on each level. To do so, you must sever the ropes which keep them off the safety of the Earth. Simply put, World of Gibbets requires accuracy and finesse. As your weapon of choice is the bow, you are able to draw back the string as far as you so desire and control the power of each shot. Drawing to maximum tautness will result in a more straight flying and far reaching shot, but the game rarely makes that the most viable option. If having to shoot rope wasn’t hard enough, the game throws a number of obstacles in your way. But never fear, power-ups are here. The most common issue you’ll run into is direction. Some characters hang beyond the conventional reach of a bow and force you to devise a plan. On some levels, panels marked with an arrow appear. When your shot hits said panels, another arrow is fired in the direction the arrow mark was facing. This allows you to completely alter the trajectory of your shot and save the day. Other panels take a slightly different approach and, instead of changing the course of arrows, simply teleport your bow to their location. Again, this allows you to make shots that were originally impossible. Which is nice. Some levels decide to bypass this entirely and give you a super arrow that simply passes through every obstacle, except rope of course. Though what you will have to work with is dependant on each level. Should any stage become too difficult to complete, you have access to a small supply of Super Arrows that will immediately complete it. Though these are best saved for dire straits, lest you wish to buy more. 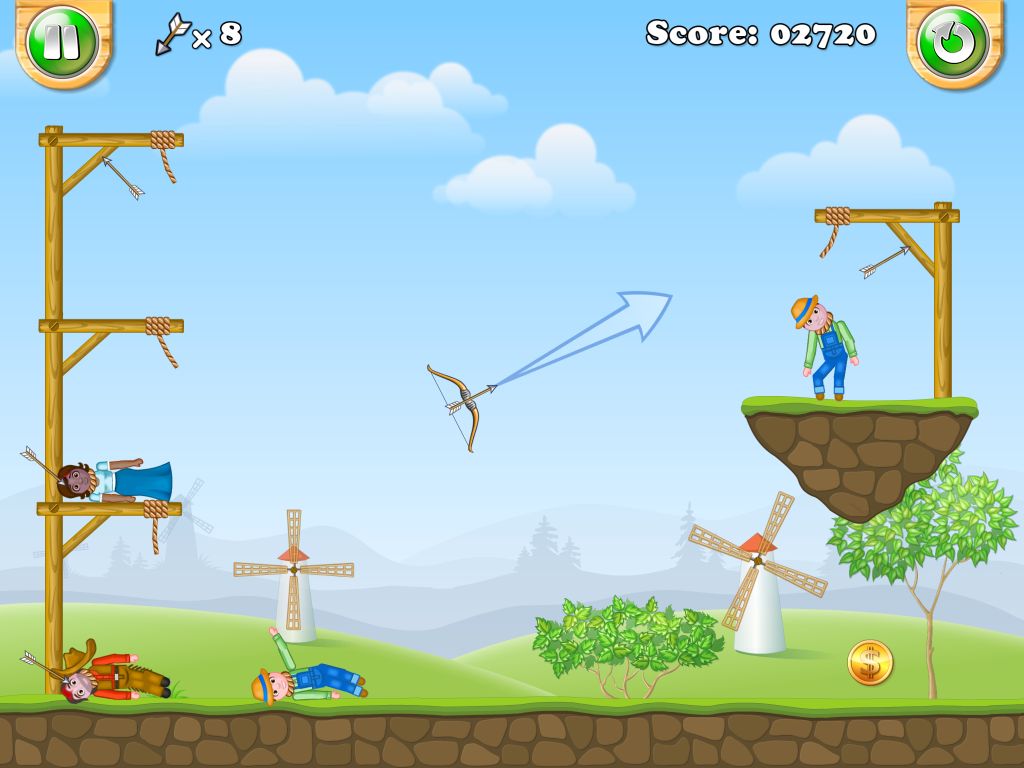 The main danger of the game is injuring those that you are attempting to rescue. Should your shot miss the rope, there is a chance that you will strike the poor hanging citizen. This will cause a rather sizeable drop in their health bar, which is constantly being drained. You know, on account of them being hanged. Some levels require you to fire a volley of arrows to save a character, which normally would kill them. Luckily for you, some levels include a shield power-up that protects characters from your arrows. Be warned however, it will not stop the health drain attributed to a brief life on the gallows.

At certain points in the game, you will take a brief divergence from standard play and get a taste of the different game modes in Gibbets. For example, in one mode, you must protect bundles of hay from ravenous sheep. To do so, you must shoot them with arrows. Or in another, you must collect a certain number of vultures. To do so, you must shoot them with arrows…I think I’m sensing a pattern here. These games can be played more, once you’ve collected enough coin to purchase them, done by completing levels and picking up special coins placed within said levels. These coins may also be used to purchase fancy new bows which, along with looking nice, each possess a unique and helpful ability. On the topic of collection, try to nab as many stars as possible. Received for completing a level to a satisfactory level (ie Not killing anyone) these stars are necessary to unlock more levels. So get practising. 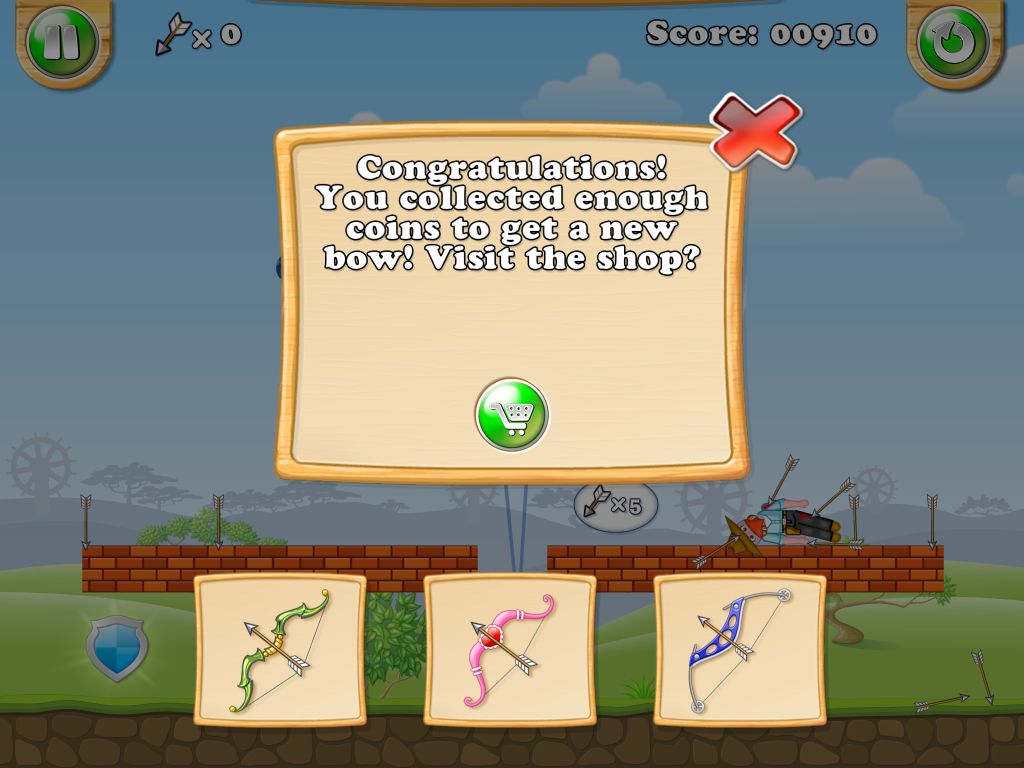 Visuals and Audio
For being based on such macabre subject matter, World of Gibbets does a tremendous job of remaining visually humorous. The overall cartoon nature of the characters greatly subdues the impact that a slew of hangings should have on a person. Though the faces that slowly turn blue as health runs out is still pretty dark, in a “that’s not funny and I’m a monster for even thinking about laughing, but I’m gonna giggle anyway” kind of way. Though the angelic spirits that ascend into Heaven should you fail kind of mete this dark element. The backgrounds themselves give of an air of clean simplicity that suits the game perfectly. There’s no unnecessary elements present just to pad out the visuals, just enough to look good.

It’s a game semi-set in the West, did you really think that there wouldn’t be guitar? Because there is. Also drums. Just like the visuals, the audio elements of Gibbets are surprisingly upbeat, adding to the sense of simple fun. It’s also nice to see the harmonica making an appearance. Not enough harmonica in the games of today. Sound effects, such as vultures squawking and rope being torn, also add a nice little touch to the game that really makes the audio seem complete. 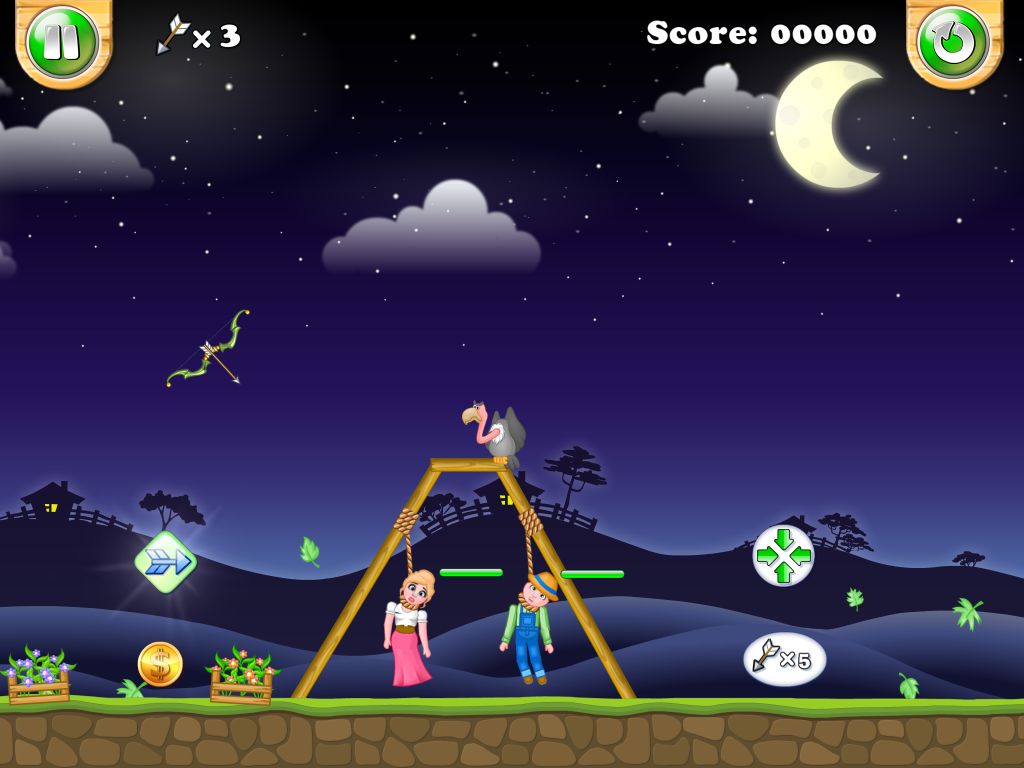 Overall
World of Gibbets is a fun game with an interesting, albeit dark, premise. I mean, how many other games have you save multiple victims of hanging? Not many I bet. The controls are simple enough and the game doesn’t overload you with options, deciding rather to ease into the whole power-up business. The ability to invert the direction you drag the bow to fire was also a nice touch and expressed a sense of effort on the part of the developers. It’s the little things. So have fun attempting to save people and try not to feel too bad if you accidentally fire an arrow directly through their face. It happens to the best of us. World of Gibbets is just one of those well put together silly games that we all love to play. Seriously, who the heck put all these people on gibbets?