It comes as no surprise that Where’s my Water? is a Disney creation. After all, there’s a cute cartoon animal that would usually be dangerous but in this case is just cuddly, the evil poison goo is just a purple sludge that is in fact helpful, and the aim of the game is to allow the gator to take a shower. The only way it could get more Disney is if the gator was a prince.

Where’s My Water is an app based on physics and puzzles, which is more than I was expecting considering it is a Disney game. As I watched and listened to the intro I felt this sinking feeling in my stomach that I would be stuck in a nightmarishly simple child’s game, but that was not it at all. Maybe children have gotten smarter, maybe my expectations are horridly off, but I was pleasantly surprised by the nice learning curve that resulted in some interesting puzzles, some even took a couple tries to figure out how to do them right. 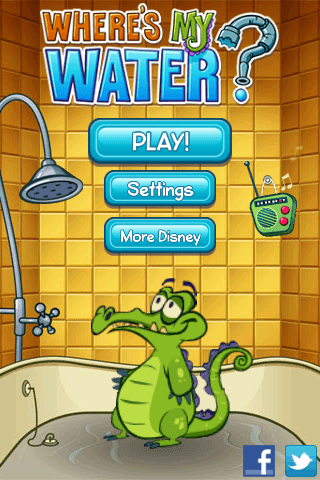 The concept of Where’s My Water is simple and cute in its little Disney way. There’s a alligator named Swampy who lives in the sewers and who likes to take lots of baths because, well, apparently he’s a little special one. However, given that he lives far under the ground getting the water to him is not the easiest task (he’s too good for sewer water you see). 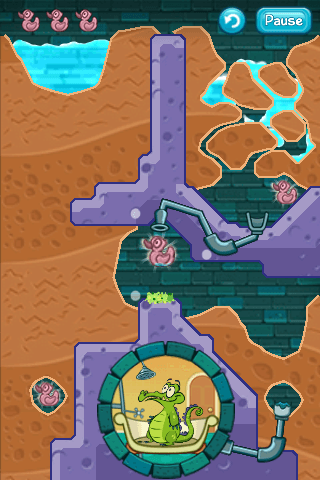 You need to get the water from the source – whether that be a spewing pipe or puddle of water – to the pipe that leads to his shower. In order to do that you swipe your finger over the sections of dirt in a tunnel leading the water the right way. Along the way you have to try and collect three ducks, this is similar to Cut the Rope’s stars in that you don’t need to get them but it would be better, especially since you move onto the next stage when you’ve reached a certain number. Each level is completed successfully when Swampy has enough water to run his bath. 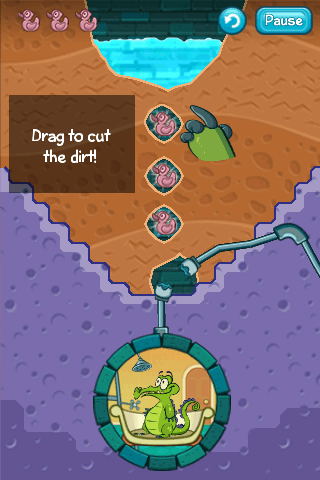 It sounds fairly easy, and it is to begin with, however then a range of difficulties start being introduced such as poison and moss. The moss is more of a pain than the poison funnily enough, because when your water touches the moss it makes it grow at a ridiculously fast rate and basically blocks your water flow. The poison dissolves the moss, but if it comes in contact with water it turns the water to poison also, which kills the rubber ducks and is not something Swampy wants to bathe in. What a picky one. There is also green acid that eats through everything it touches. Except Swampy. He’s okay. 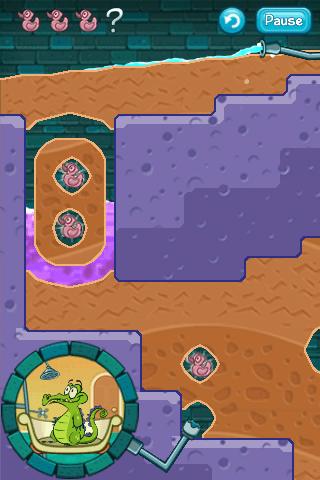 The game also has platforms that move either upon activation or of their own accord. These can be helpful or annoying, depending on how much you understand of the level and if you know how to use them to your advantage. As levels go on you will find that you’ll be redo-ing levels just to tweak the timing a bit and make it run smoother to get those higher points and be awarded for time bonuses and water overflow. 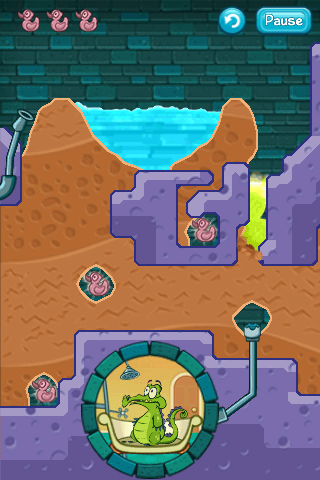 The game currently has four stages with twenty levels to each stage. More stages are promised, which isn’t hard to believe since it was released less than a week ago at the time of this review.

If you are ever stuck, always read the title of the level. Many times it gave it away for me before even starting the level or seeing what the challenge was. This intuition might be lost on some, but for others they may find that the titles are a dead giveaway and detract from a possible challenge. 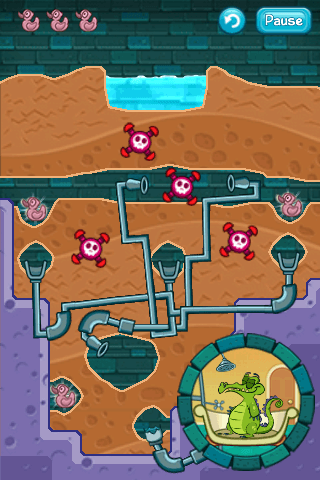 While it is not as challenging as Cut the Rope, the physics are good, the gameplay is freshened up every few levels, and that damn gator is just so cute. It was enjoyable, if not quite as challenging as it could have been, however I expect that to come as more levels are shipped out.

The game is cartoony which may repel some people, but it’s sweet and earnest as well and definitely family friendly. The little cut scenes at the start of stages are cute and really make you feel for this gator that is just too high class for the rest of his species. 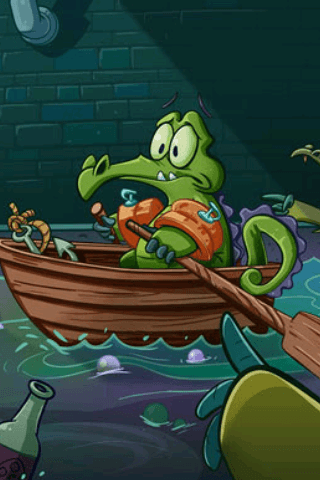 Similar to the visual style, the soundtrack is jaunty and upbeat. You never really forget it’s a Disney creation, but that by no means is a bad thing. And if you prefer your music dark and ominous then don’t worry, you can always fall back on a music player and mute that damn cheery app soundtrack.

The game would appeal to kids because of the design, but to adults because of the puzzles. They aren’t the most challenging, but they do make you pause and think properly. Reminiscent of a few puzzle games on the iOS, there’s no surprise that Where’s My Water is a hit. And hey, it teaches kids good hygiene so that’s always good.

I give Where’s My Water