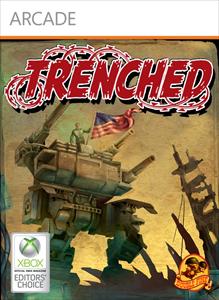 I cannot lie I am not a huge fan of strategy games. Placing units and barking orders isn’t as much fun as getting in on the action and letting loose. In Trenched it seems Double Fine wants to solve that problem for people who are like me and don’t want to just sit and watch. Trenched takes tower defense games and gives you the ability to join in on the fray and get your hands on a mech and wreak havoc on your enemies. Double Fine gives us a great Xbox Live arcade game that will keep you coming back for more. What makes this mech fighting/tower defense hybrid so good find out in this review. 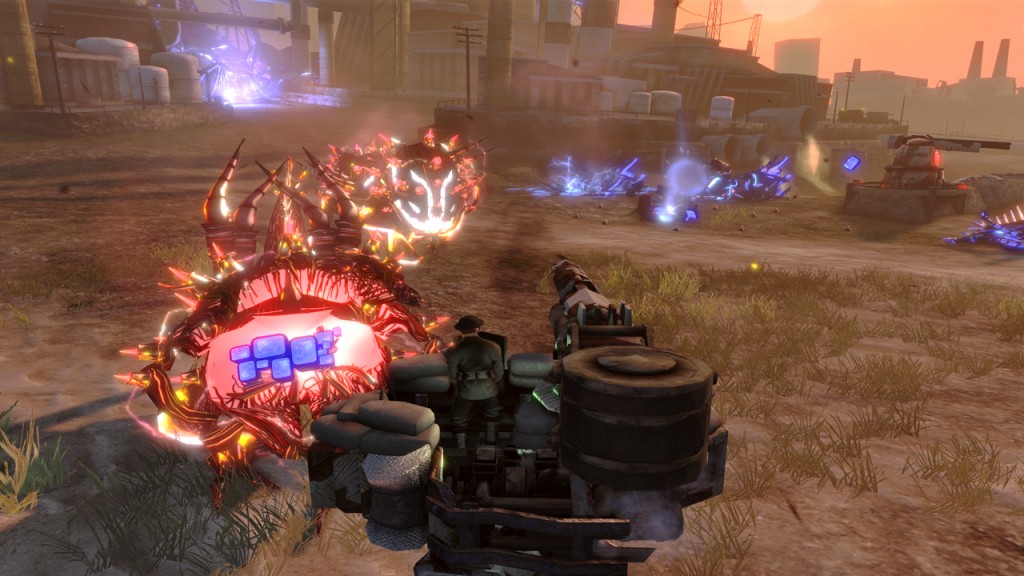 The story probably won’t be the biggest driving factor in playing Trenched however it does have one. Two solders who both lost the ability to walk during the war (which I’m assuming is World War I) were listening to a broadcast and somehow became super geniuses. Frank developed mechs to allow people like him the ability to walk again called trenches while Farnsworth made it possible for people to see what was going on in the world from being in your homes using TVs. Farnsworth created creatures called Tubes which he plans on using to take over the world, Frank has now taking on Farnsworth in order to stop him from taking over. You play as one of four solders as you take down Farnsworth’s army of Tube monsters, there is nothing exciting about the story but it can drive the game along for those who care. For the rest of us it will be riding in the back seat.

Treched is has some great art direction. When you take a look at the gameplay and the stills in cutsceens its almost looking into some of the art from the time period. There even seems to bee some steam punk influences as well in Trenched. While the Tubes glow a bright blue or red the character designs really stand out with each enemy class, everyone from the little grunts to the big willies you will see some unique monsters. The different mech designs are great as well with some great names for some of the weapons and parts, I am currently sporting the Hot Pants. You know your mech ain’t stylin’ without some hot pants. 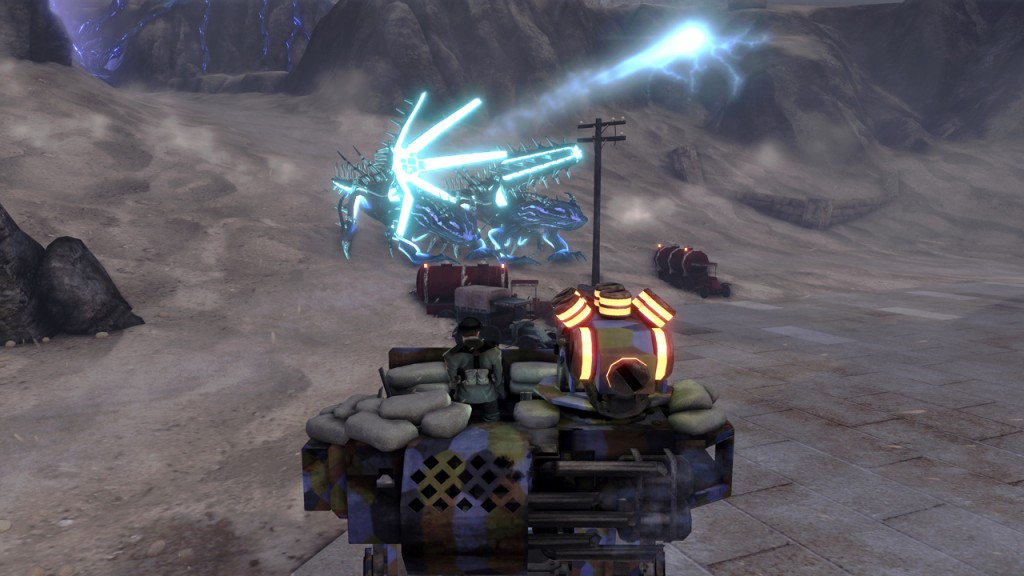 Trenched has some great writing and humor in it, it can be smart and very clever at times. There are times that it can fall flat but for the most part it is very entertaining. While on the battle field however this is were you may find yourself and your teammates very annoyed. Lines of dialog repeat a lot and even if you have chosen a different solder to play as they all say the same lines. Even frank during waves will say the same thing over and over about enemies and many things. Voice work is good however repeating lines do nothing really in battle but state the things you already know thats going on.

Double Fine have always been mad scientist when it comes to creating great gameplay experiences, Trenched maybe one of the best they have put out yet. They took the best parts of tower defense games and added a action mech game layer on it to make one tasty gaming sandwich of win. You will be piloting the trench, setting out guns, dampeners to slow enemies down, healing stations, mines, and even magnets used to pick up scrap laying around. This said scrap laying around the stages will help you build on to your defenses. So its very important that you pick up as much as you can, you even have a built in magnet that you use to pick up the scrap. 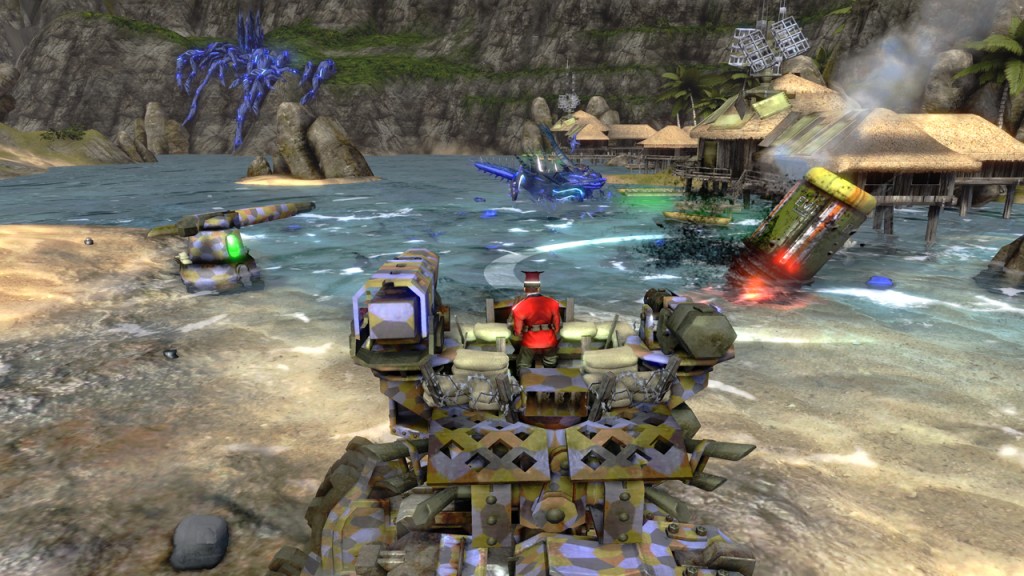 Building your mech is fun as well after every mission you can earn money to pimp it out with new bodies, legs, guns, emplacements, colors, and even clothing for your pilot. Seeing some of the crazy weapons and add ons for your mech is nice and names such as Hot Pants or Stunning Legs are always adds to the awesomeness of this game. Each battle is different so before each mission you have to choose what equipment will be right for the situation.

Where the tower defense aspects come into play is when you call upon your emplacements, which are your defenders. You can call down a variety of weapons and other tools from the sky that will aid you on the battle field. Need extra firepower, why not call upon the shotgun or machinegun emplacements. Need to repair your trench, call for a repair station. There are emplacements that even collect scrap for you so you don’t have to venture out of the base to find it. Upgrading, adding, and maintaining emplacements are key to success no matter if you are playing single or playing with a group of friends online. 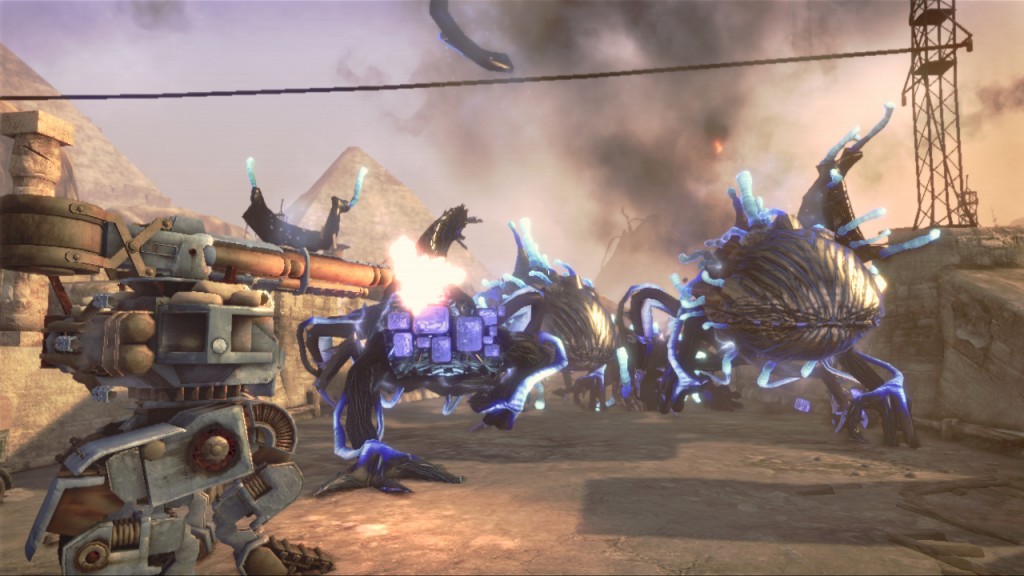 Getting friends together to play Trenched is where the real magic happens. I ended up playing like 3 hours by myself come back later got online and played with a group of others from late in the evening till 4am. Considering I don’t play a ton of games other than fighters online and I can say no matter what you will have hours of fun. There were a few bugs that did kick me and the other players out of the game like a disk read error. For some reason my Xbox thought I was playing a disk game. Stuff like that can be patched though and the problem only happened after long hours of play and only once.

Trenched was a game I was not for sure I was going to like and only knew a little going in. I can say this game is well worth the $15 or 12MSP. While some annoying repeating dialog and a few bugs may aggravate a few over all this game is well worth it. Overall if your looking for a fresh new game that won’t break the bank Trenched is fully loaded and worth your time and money, especially when you have a few good allies that are willing to join in on the fight.