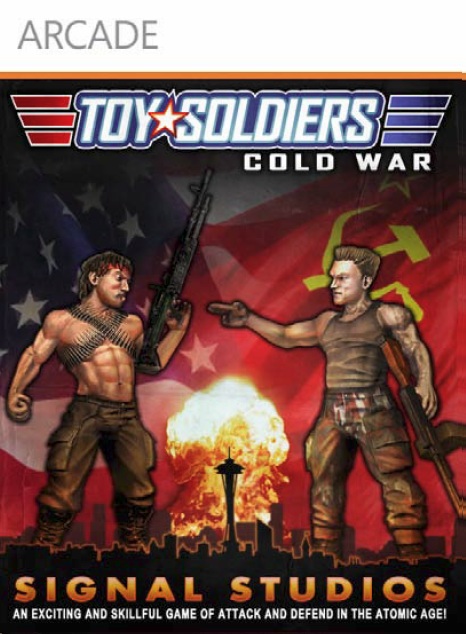 “THIS ONE’S FOR JOHNNY!”

Imagine a Sylvester Stallone alike screaming that, dressed as Rambo, firing a machine gun and bazooka simultaneously whilst marching round a battlefield laying into some pesky communists. Do I even need to carry on with this review?

The follow up to 2010’s highly successful Toy Soldiers (the review of which can be found here), Toy Soldiers: Cold War is at its core a  tower defence game, with a few unique traits and a good bucket of personality thrown in. Unlike its WW1 predecessor it takes a cold conflict and turns up the heat; it’s Russia versus America, and it’s anything but subtle!

The main campaign has 10 levels, with one tutorial session. The plot sees you working against an ever escalating Russian threat, moving through different locales (Europe, the Middle East, the US) and defending them in the name of freedom and democracy. Not that the game places any emphasis on plot and politics – as the developer’s website makes very clear – you’re here to  “BLOW EVERYTHING UP!”.  And of course, the whole thing is played out with 80’s style toys, in a kids bedroom, nothing deadly serious.

Enemies come at you in waves, which can be hurried on at your wish. Units can be placed only in particular areas, and as you collect cash from defeating enemies or destroying the environment you can upgrade to more deadly versions. Bosses crop up at the end of some levels, and instead of a tower you defend your toy box, so far, so tower defence. 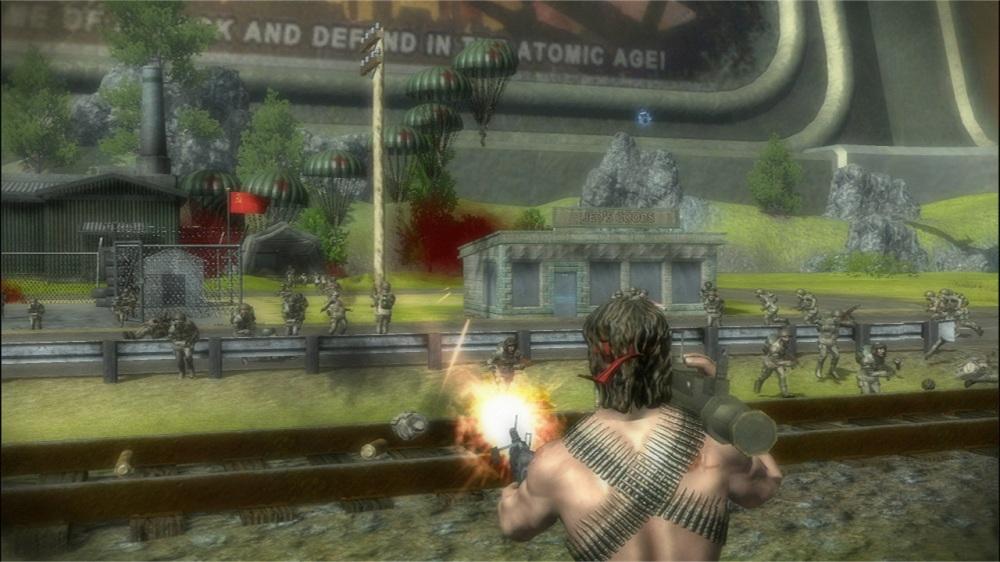 What makes Toy Soldiers stand out is the ability to drop into the action and take control of your turrets. Standard units like the machine gun and anti-air unit are point and shoot affairs, with secondary fire options such as grenade launchers and an ever entertaining missile cam that let’s you make otherwise impossible longshots. Shoot enough of the flag carrying Russians in this mode and you earn yourself a barrage, essentially a power up (the Rambo episode mentioned above comes courtesy of the Commando barrage).

In early levels you can breeze past without dropping into a turret once, but if you want to fend off the hordes in later levels or on harsher difficulties, you’re going to need to get in on the action and take over from the (very good) AI. Jumping into the units and controlling their fire yourself is the only way to earn those sometimes game changing barrages.

Also on hand are battery powered toys;  helicopters, jets and tanks that can bring you that extra fire power in times of crisis, or whenever you just feel like running over some infantry! They are definitely the most powerful units available in the game, and do add another level of strategy as you can only use them for a certain length of time before having to let the battery recharge. They do create some of the games few problems – it is very picky on landing helicopters to recharge, and don’t hope for any mid-air collisions between airborne units – you’ll just pass straight through each other without so much as a sound effect. 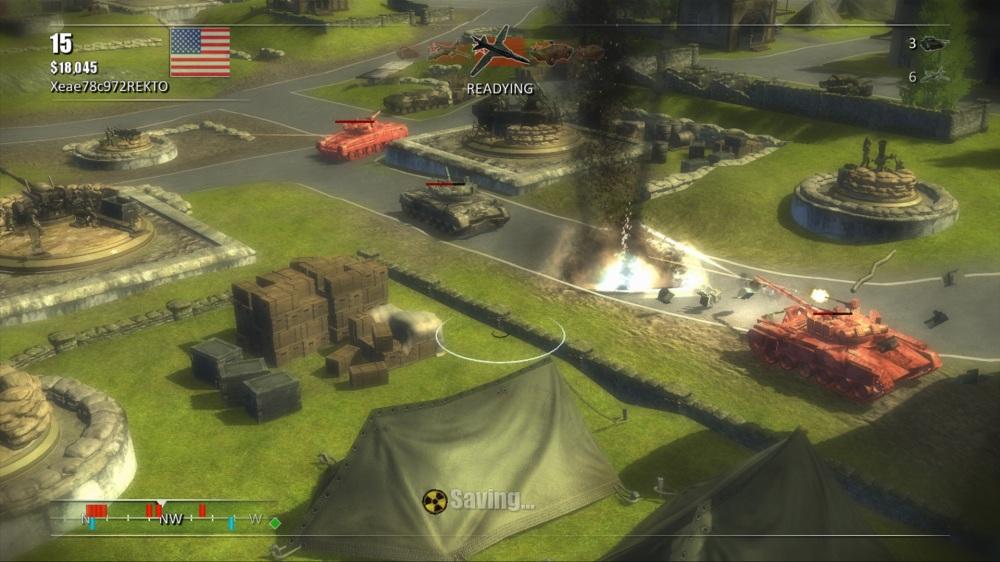 The strategy element is limited in that there are only 6 unit types available, and with certain units only fitting in to different sized areas, it’s usually fairly obvious what needs to go where. There are five difficulty levels on offer so there is sure to be something for everyone, no matter how savvy they are with tower defence. There are also plenty of things to keep you coming back after the main campaign is over, with each level boasting medals, decorations and challenges.

If you fancy more of a challenge there is also a survival mode to dive into, and it’s a great way to quickly crank up the difficulty – the pace is much faster than the campaign on normal level and the extra pressure makes it a lot of fun. Tire of shooting all those Russians? A handful of minigames are on offer too, mostly variations on target shooting but enjoyable and addictive all the same – leaderboards are always an incentive to get better! 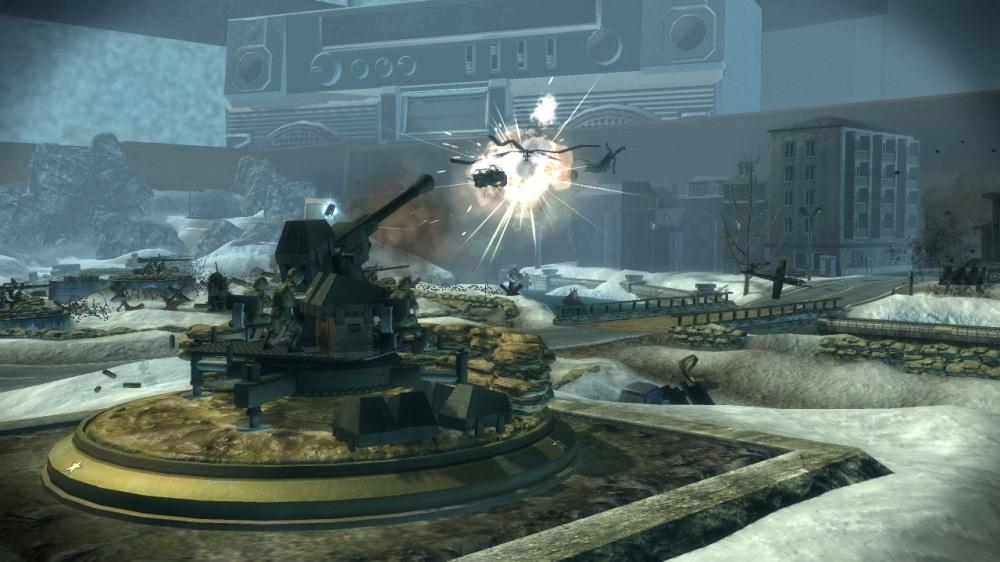 Multiplayer is a two player versus match, giving you a chance to play as the Russian army. The units are identical to that of the American side as far as abilities go, but have different designs, and the Commando in particular is given a nice Russian twist. It does suffer from the same problem mentioned in Capsule Computers review of the first Toy Soldiers game – if the 2 players are equally matched, you can be there for a very long time with not much happening.  I found that the co-op options available actually made for more interesting gameplay than versus, as both players have full control options and earn their own money, so can often end up totally undermining each other’s gameplan. You can co-op any of the main modes, including survival.

For an XBLA game Toy Soldiers looks fantastic, the cartoon style follows the toy box theme without making it chilidish and the individual turrets are all easily identifiable in battle and highly detailed. The levels have a lot of detail that will probably go unappreciated unless you go flying into it with one of the battery charged units, and the menu screens are clear and simple, making it easy to keep track of the medals you’ve earned and your standings compared to your friends.

The music is perfectly suited to the tone of the game, all synthy American guitar rock on the menus and ‘Victory!’ Screens. The unit sound effects are realistic rather than cartoon like, a good decision that gives the weapons impact – all the more important when you can actually fire them yourself. The army men who run your arsenal occasionally shout out entertaining snippets, and of course the Commando barrage is always entertaining. It’s just a shame there isn’t more of this humour throughout the game.

Minor nitpicks aside, Toy Soldiers: Cold War is a really enjoyable title. I went into it knowing very little of what I was in for, and found myself easily losing hours to the game. The action twist keeps the pace going and involves you more in the gameplay, cleverly distracting you from the fact your turrets are being blown to bits while you unleash hell with your Apache helicopter and Howitzers.

Its light hearted tone is pitch perfect, although I do wish the developers had cranked up the humour a little. Expand the scale, throw in some well written cut scenes and Toy Soldiers could make an excellent fully fledged game (it’s very easy to forget that it is actually an XBLA title).