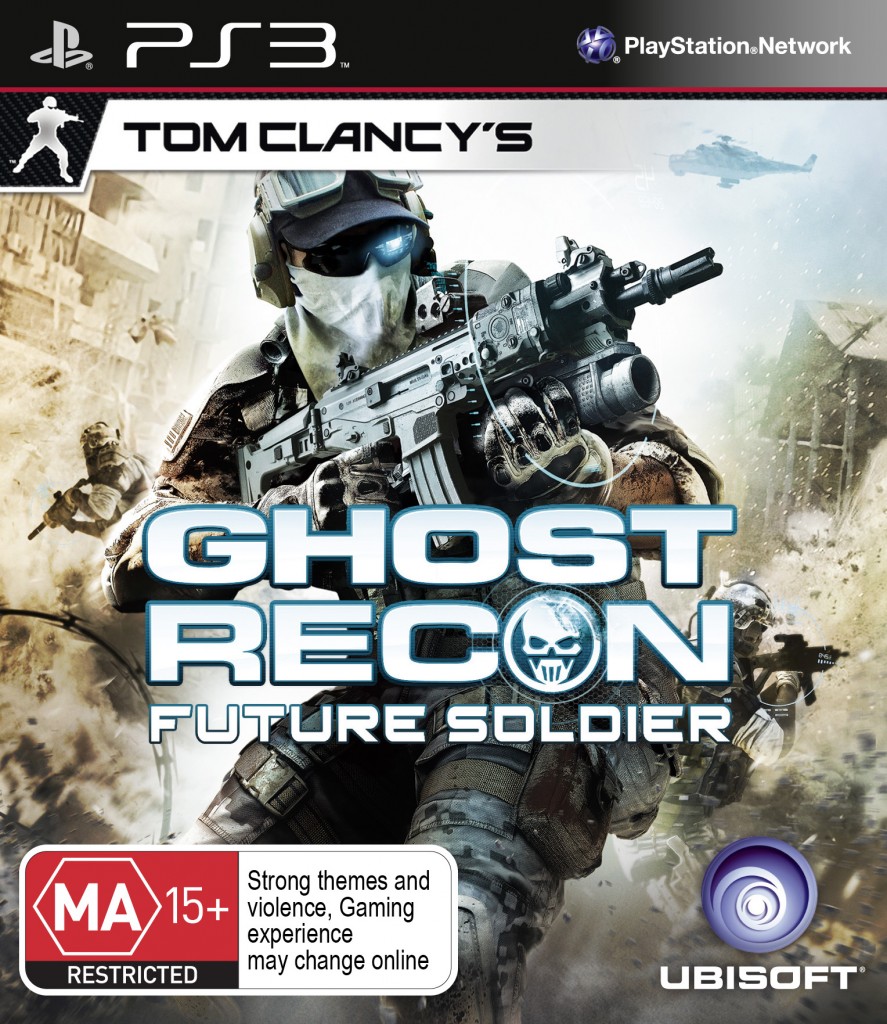 There hasn’t been a Ghost on an HD console since 2007, when Ghost Recon Advanced Warfighter 2 picked up strong reviews across the Xbox 360, PS3 and PC. It and the rest of the Recon series have a reputation for providing an alternative to more run and gun shooters by focusing on strategy and stealth. With Future Soldier Ubisoft have produced a very slick and cinematic third person shooter, but despite it’s many upsides it does lack a little in the strategy and stealth department. Players take on the role of a member of Hunter Squad, a team of four ghosts drawn into an ever more serious mission thanks to the game’s opening event.

Future Soldier opens with a unit of Ghosts being wiped off the map by a dirty bomb. The story that follows picks its plot points from the big book of shooter clichés, touching down with bombs, arms dealers, Russians, terrorist organisations, refugee camps, civilian casualties, a snow storm…so yes, there’s likely nothing new to see here, but it’s all pulled off very well. The big bad moments are a pretty spectacular bunch, backed up by some very impressive explosions and some cinematic camera work.

Plot points are easy to follow and are backed up by mission briefs, and even in mission you’ll be able to dig up a few details about your surroundings thanks to the HUD display, which has place names and other essentials floating around in world rather than flat on the screen. The cutscenes don’t outstay their welcome, and the action beats are balanced out with some more character lead scenes that shore up the four Ghosts as personalities rather than gun and camo combos. None of them will make the break into iconic character land, but they’re likeable enough guys and are given some time to be something other than exposition dealing robots. Crucially it feels like you’re playing as part of a team, even if that team isn’t as interactive as some would expect when it comes to the gameplay.

Future Soldier is a third person shooter, taking the usual mission/objective structure for it’s campaign. There are some instances when the Ghosts jump into the back of a vehicle, but for the most part this is on foot action, with a heavy emphasis on knowing your enemy before he knows you. The ‘future’ of Future Soldier is most evident in its tech load out, which provides sensor grenades to scope out the battlefield, a spy drone that packs an electrical punch, and a camo system that renders the Ghosts nigh on invisible when in the crouch position. It is very much a near future setting, so don’t expect any sci-fi elements to the main weaponry. 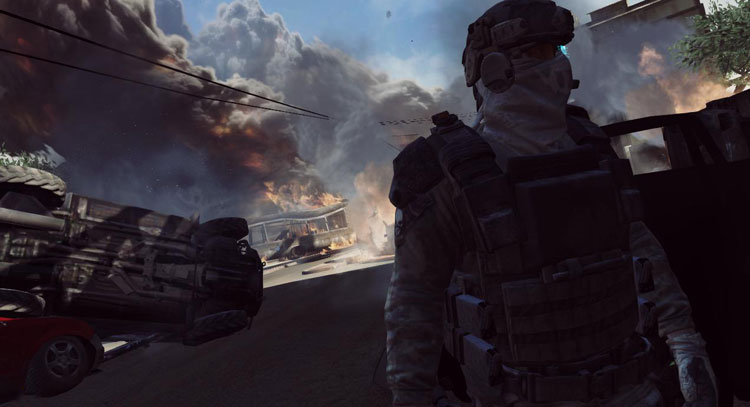 All of these gadgets are geared towards finding your enemy, and with many objectives coming with a ‘no alarm’ stipulation, getting into the habit of using drones and sensors is a must. That said there are plenty of instances where a firefight kicks off, and even one level where you get your own personal mini AT-AT – or more officially- War Hound. It’s an incredibly over powered thing, coming as it does with an unlimited supply of mortars and missiles, but it’s crucially only around for one level, ensuring that the power play remains a fun highlight rather than a game breaker.

Sync shots are another great addition, allowing you to target up to four enemies and take them all out simultaneously. Again it creates a feeling of power, as you quickly line up your sights on a grunt and have your buddy take him down as you roll by. Pulling off a sync shot also grants you a moment of slow mo, so if you’re thinking on your feet you can kill off enemy number five while you’re at it. It’s incredibly satisfying to do, but sadly the sync shot is the only way you can interact with your team.

Even the most basic of squad commands are absent, with the lack of even a ‘go here’ or ‘hold fire’ giving the strategy a very limited scope. Your fellow Ghosts do behave quite well but nonetheless are on rails, often taking away any tension in the combat by making a bee line for the next point of conflict. That aside they stay in cover and are good at spotting enemies you might miss – their shout outs and chatter helps to move things along at a reasonable rate and bolsters a bit more team spirit.

Speaking of teams and being on rails, Future Soldier has another trick up it’s invisible sleeve. Certain sections will see Hunter Squad protecting a VIP by forming up around them in diamond formation. These sections leave you nothing to control but your shooting hand and your eyeballs and whilst they allow for some coolly filmic moments it does highlight the lack of any significant control the player has on the path through a level. Future Soldier is big on the old cinematic glamour vibe for sure, and it pulls it off well,  but at the expense of real strategy. Luckily it does manage to keep away from Call of Duty and Battlefield territory, and is certainly not forgiving if you happen to find yourself in open ground. 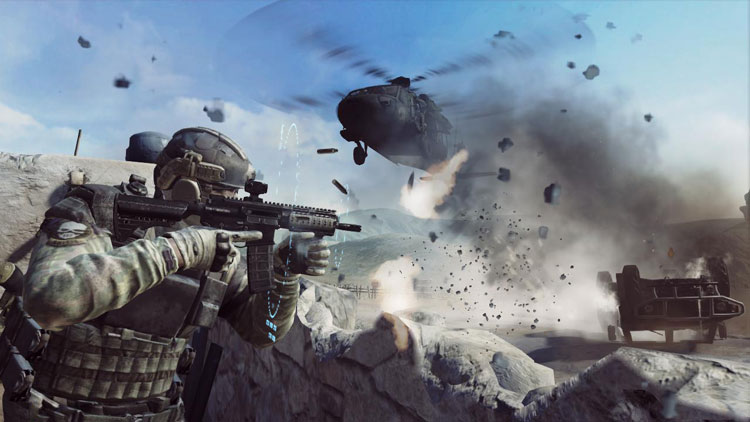 The shooting mechanics are easy to pick up, even offering a FPS style viewpoint for more accurate aiming. The weapons on offer are standard issue stuff, but to make up for it the game has a Gunsmith feature that lets you customise weapons with a bucket load of different bits and bobs unlocked by completing objectives in all the game modes. Adding more depth are the multiple challenges for every level, which range from speed runs to specific weapon feats or low clip completions. Add in a 100 point scoring system that takes into account headshots, civilian casualties and the like and there’s plenty of reason to revisit the campaign levels.

Of course there is a considerable whack of multiplayer available to complement the 10 hour campaign. Guerrilla mode is basically another Horde mode that can be played local or on line, and the whole campaign can also be played co-op too. Having a real person to talk tactics with makes a huge difference to some of the more stealth based levels, allowing for some more complex moves and generally giving you the chance to feel that much more godlike.

The other four modes on offer include the neatly twisted ‘Decoy’, which doles out three objectives to two teams of which only one is actually real. Success can turn into failure in an instant, and the whole set up feels fresh in comparison to obvious copy cats like Guerrilla. The usual suspects (deathmatch etc) are helped along by including some of Future Soldier’s more unique mechanics, balancing things out by splitting talents over a small selection of classes – not everyone can camo for example. It promotes the same team work that is displayed in the main campaign, so everything feels like one coherent package.

Future Soldier ticks the majority of boxes when it comes to visuals. There is the occasional texture that isn’t quite as polished as the rest, but the game nails a slick and subtle future tone. The glint from the Ghosts eyeware and the blue circles hovering around their weapons hint at sci fi, whilst the camera floats around the entire team to create some impressive, if scripted, moments. Cutscenes and plot mega moments look fantastic (as long as you’re not considering any human faces), and the whole presentation is smart and well integrated. Like nearly everything else in the shooter genre, snow storms have been done before, but you’ll be snapping off you’re thermal vision to have a closer look at it for sure. 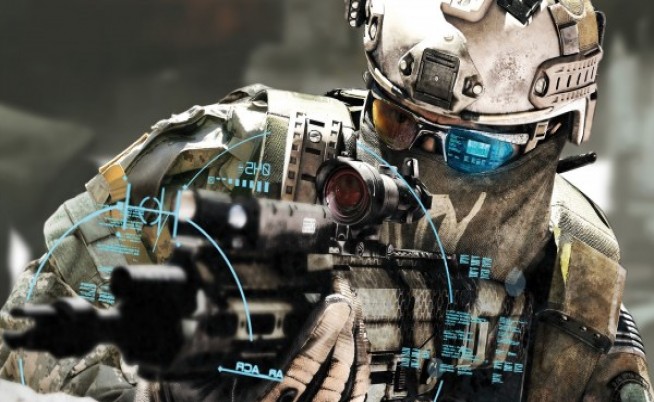 The gun fire is very impressive and visceral, each individual bullet striking with the muzzle flash. Every environment is hammered home by distinct audio set ups, so when you’re in a sandstorm you truly feel like you’re cut off from reality. The voice acting is good for the most part but squandered by the distracting facial animations, and sometimes the music feels like it’s been left too far out of the picture.

These are minor issues in a well groomed package, and the quality should by no means be overlooked simply because the genre is already full of such polish.

Future Soldier is a incredibly well made game that checks a lot of boxes when taken as a third person shooter. The presentation is slick and there are enough points of difference to make it stand out in the saturated shooter crowd – especially in a relatively quiet time for the genre. The future spin is subtle and allows for some interesting gadgets, and the multiplayer certainly offers a lot of added value: it’s a very coherent package. Whether it is a great Ghost Recon game is another matter, as the lack of any great influence over your team mates renders the single player campaign a little lacking in strategy and a feeling of control. Fans should certainly be aware of the  the slight shift in focus, but the overall quality of the game still comes through.