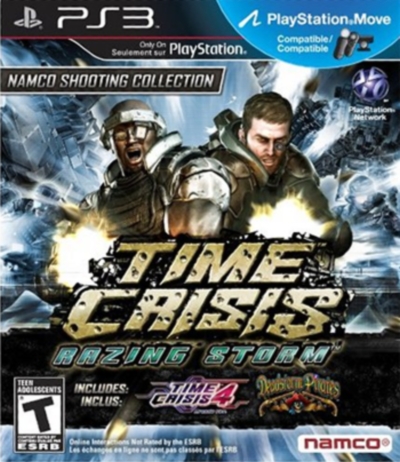 One of the greatest arcade rail shooters of all time has come onto the Playstation 3 for the second time. Utilizing the PS Move as the gun controller, it simulates having the arcade GUNCON controller in your hands. It includes three games. Razing Storm, Time Crisis 4, and Deadstorm Pirates. Also known as the Namco collection. Has Time Crisis Razing Storm finally succeed in bringing the arcade feel on the console, or did it die trying? 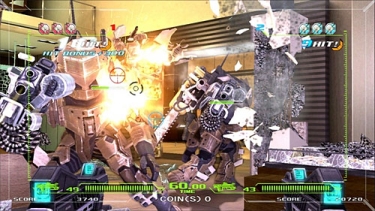 Not much here as you would know if you played a TC before. All the games before it usually have to do with terrorists and a plot to destroy or control the world, same with Razing Storm. Terrorists have come to do their nefarious plottings and it is your job to take them out. TC4 deals with the use of nano machines to destroy the world. Deadstorm Pirates has you on a quest for booty and many mythical creatures happen to get in your way. It sets a nice backdrop for mindless shooting action. Not much for an introduction but when it’s an arcade game it doesn’t really need one. Time Crisis is all about the re-playability and how many quarters you can constantly feed into the machine. 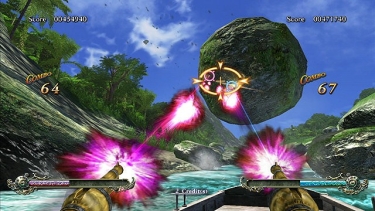 Let’s get straight to the point, this game is boring compared to the arcade. In the arcade versions, you shoot with a gun and no reticule. So if someone is standing next to you, they can see how good your shooting skills are. It ups the difficulty and fun factor. The Move version uses a reticule, it would be fairly hard to aim the control like a gun and even hope to be accurate without one. It was smart move to put it in the game but, in turn made the action very stale. In Razing Storm your default weapon is an automatic assault rifle. This means that you can just hold the trigger button with the occasional push of the move button to reload. Not much variation from that except for boss battles where more use of the duck button is needed. In Deadstorm Pirates you don’t get the cover mechanic.  it boils down to praying and spraying. The aim is to kill the monsters fast enough so they do not hit you.  Anyone familiar with House of the Dead, Deadstorm Pirates plays exactly like that.

I believe TC4 to be the most fun out of them all the three titles on this disk. Maybe because I put so many quarters into the TC4 machine or because it simply works the best using the PS MOVE. The only controls you need to know in TC4 are shoot, duck and switch guns.  Shoot and switch guns are the same button so you are basically only pressing two buttons through the entire game. This simplicity is what makes the TC series so fun. When TC4 came out on the ps3 it was bundled up with the GUNCON 3 gun controller. I don’t know how it performed as I never tested it out, but I’m guessing aiming with the gun would of been performed  quite the same way (looking down the sights and shoot),  just like the arcade version.

This is just explaining the arcade mode of the games. Razing Storm has a story mode that brings something new to the series. In this mode is presented to you as  a first person shooter. Moving your character around with the analog stick and looking with the Move controller. This control scheme is very clunky and flawed.  Using the Move and navigation controller (similar to how the wii-mote and nun chuck work), you turn by pointing toward the edge of the screen. I got very frustrated at times with this, say there is an enemy right on the edge of the screen, when you go to shoot at him the screen moves and you miss. This happened to me so many times I lost count, the only thing that did help out the game play was the accuracy of the Move controller and PS eye. The hardware is what makes this game good. If this fundamental piece was broken, the game would be a total disaster. There is the option to play with the Dualshock 3 controller. This just makes it no different than a regular first person shooter. 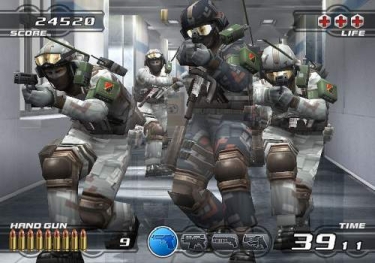 The visuals on all three games are not very visually stunning. They aren’t expected to be if they are arcade games. On Razing Storm though, I expected a little better since it was built exclusively on the PS3. It has improved from TC4 but not much. Enemies look quite blocky and don’t move around much. They either stay in the same place or move back and forth to and from cover. Even in story mode I would catch someone standing right in the middle of a hall way or room. Now granted one hit taken and one of your three lives are stolen by the Grim Reaper himself, but the AI are not very smart. Usually you wouldn’t have time to notice as the enemies are trying to kill you and you need to be quick on the draw so to speak. There is a lot more detail in Razing Storm than in the other two titles though. The frame rate runs good and doesn’t slow down one bit. This is very commendable to Namco as it’s a very fast paced game.

The audio is, what I would call cheesy action music. Not very moving or cool but it gets the job done. The use of basic sound effects make the game not feel very awkward. Deadstorm Pirates has music that comes straight out of  pirate themed game or movie. The sounds each gun makes isn’t anything special. A handgun sounds like a handgun and a shotgun sounds like a shotgun. This isn’t a bad thing at all, if these sounds were any different I would be really wondering what happened during development.

Time Crisis has been trying to make a big hit on consoles since the second in this series. This latest version uses the advanced technology of the Move to deliver accurate but stale gameplay. Basic weaponry and repeated gameplay trailing all the way back to the first TC make this game something you can skip on. If you really like the series and don’t want to spend all your money at the arcade, then give it a try. If not, it is best left to the arcade machines to give the exhilaration of rail shooting.