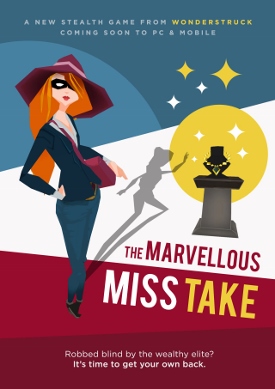 The Marvellous Miss Take is a left-of-centre heist / stealth / puzzle / action / casual / indie game (that refuses to stick to a genre). You play the brazen Miss Take  as she navigates the private art galleries of London reclaiming what is rightfully hers.The game’s charm can be found in its cute humour, abundant quirk, elegant simplicity and inventive mechanics.

As per her will, the late Madame Take left her extraordinary art collection to her niece, Miss Sophia Take, so she would display the masterpieces for free available for the world to enjoy. However, Mr. Ralph Blackstone has managed to acquire the collection (under very suspicious circumstances) and sell the masterpieces to various private collectors. Sophia has now taken it upon herself to steal back what’s rightfully hers. While this sassy young red-head is quite capable on her own, she can’t say no to the help of master thief Harry Carver and pickpocket Daisy Hobbs.

While the whole story feels quirky and cute, the storyline doesn’t offer anything extraordinarily original. The good guy does shady things for a noble cause: we’ve seen that before. However, the game was inspired by the true story of Dr. Albert C. Barnes as portrayed in the documentary The Art of the Steal (2009). The story doesn’t really offer any exciting twists or particularly substantial development in regards to the characters and plot. Honestly the most exciting turn of events is the loss of one of your companions… until you realise he has to reappear for you to complete the objectives necessary to move on to the next chapter. Sure, as you slowly take down the villain you receive some rather amusing newspaper updates, not to mention hilarious chapter titles such as “Show Me the Monet,” but nothing that drastically affects the overall story arc. You can also access a unique epilogue for each character, a very short (and a little predictable) insight into the thieves’ lives at the end of the game. 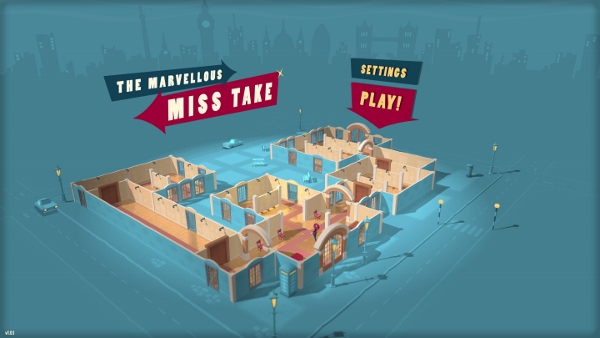 The idea behind The Marvellous Miss Take is simple: get in, avoid the guards, get what you need, get out. There are plenty of heist games with similar gameplay but there is something that makes this a little different.

What’s ingenious about this particular stealth game is the rather simple mechanics behind the guards. Put simply, their patrol paths are randomised. This forces players to think on their feet rather than sitting tight, making plans and waiting for the perfect time to strike. It also forces a stealth game to have an awesome action-type feel to it. My only complaint is that sometimes a level can become frustratingly difficult due to dumb luck. It’s all part of the game, but when your guards decide to corner you or stand right beside your spawn point, you can’t help but feel a little gypped.

It should also be mentioned that the entire game does not allow for violence. This means that players are forced to deal with all objects in their way without trimming them down to something more manageable. Not only is this style of play rewardingly challenging, but also a breath of fresh air. Similar games generally provide the option of taking down enemies in ways that may involve shooting them with broadhead arrows (as in Theif) or  stabbing them in the head before impaling them (as in Styx: Master of Shadows). Sometimes it’s nice just to get in, steal some art, and get out. Otherwise known as, according to Wonderstruck, the “wits not fists” approach. 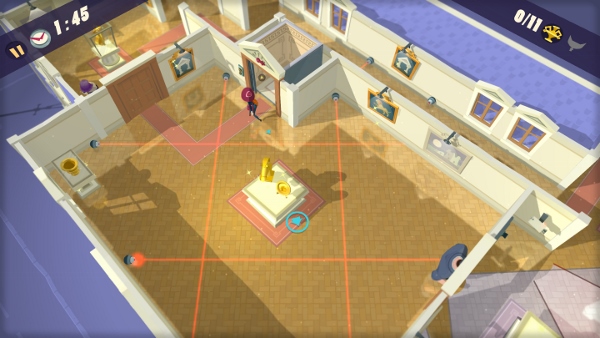 In addition to the guards, you’ll also find yourself navigating around video cameras, lasers and guard dogs. The dogs are particularly interesting. While they can identify you by sight and sound, a more limited version of the guards’ abilities, they can also smell you. Once they find your scent they will follow your footsteps around until you speed up enough to escape their range. This added layer brings a welcome challenge that stop players simply hiding out until the coast is clear.

To help you avoid sticky run-ins with guards and their dogs, you can use a variety of gadgets as well as your own body too manipulate and avoid them. Walking in their field of vision or whistling can attract a guard’s attention as you prepare to slip around a corner and move in another direction. The Marvellous Miss Take also offers a variety of devices including smoke bombs, a ‘bouncer’, teleporters and noise makers. Sophia is only allowed one such device per level (if you receive one at all) demanding that the player learn to use all types of gadgets. It also aids in streamlining the games controls. Controlling your character is elegantly refined, needing only your mouse: the left button controlling all aspects of your avatar while the right activates any available gadgets.

Sometimes, whether it’s due to a dog sniffing you out or a laser catching your leg, you just have to make a run for it. You’ll never get far. For big guys, the guards are much faster. They are, however, idiots. If you get behind a wall (or small pedestal) and quietly hide out, you may just make it out alive. Heck, if you’re in the right place, slowly creeping around a table in circles can serve the same purpose. You can even break into a masterpiece and hide behind the broken case without a guard every suspecting a thing (when he finally dawdles over to check it out). Whatever technique you do decide to use, make sure you don’t leave your hat behind… 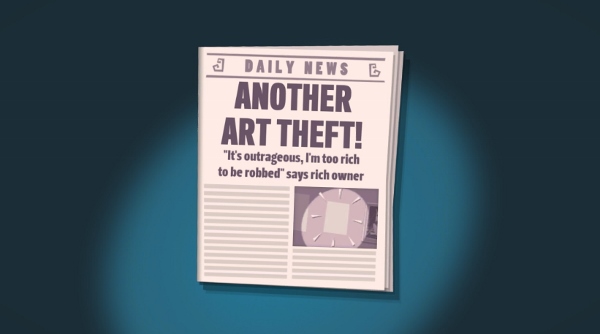 Apart from intended obstacles in The Marvellous Miss Take, also keep an eye out for those pesky bystanders. They’re not supposed to cause trouble (unless they see you trying to break into a masterpiece – then they’ll grab a guard) but every now and again they insist on being a part of the action. Maybe you’re hiding behind a table, avoiding the camera looming overhead. There’s a laser behind you and a guard just to your left. You think you can wait it out… until John Smith saunters through wanting to walk through the exact spot you’re sitting in. You’ll mutter curses under you breath but he doesn’t care. I swear he’s secretly smiling when he pushes you into the line of fire. The worst part? Gallery visitors like to gather around whatever art is left and, while these occurrences are admittedly rare and far between, they tend to happen right at the end of a level. Then again, guests to tend to make up for it when they conveniently stand in front of lasers making your job considerably easier. Just pray they don’t move.

So far I’ve talked about the main campaign which is available while playing the one and only Miss Take. While Sophia is a joy to work with, both Harry Carver and Daisy Hobbs offer unique gameplay experiences. While they manoeuvre through the same maps as Sophia, you’ll find some extra closed gates and a few changes in obstacles. Harry provides a slower style of play, mainly due to his inability to run. He cannot use the normally accessible devices yet owns his own unique ‘bouncer’ gadget. This said, his incessant need to never leave it behind combined with it’s relative uselessness makes makes it barely worth your while. However, he only needs to steal three paintings before making his escape. Daisy is much faster. She runs more quietly, can stand closer to guards without being noticed and is faster than the other characters. The catch? She can’t use gadgets, she’s required to get close to guards in order to pickpocket them and will almost always send the authorities running in her direction as she opens safes. Being the impatient person I am, I prefer this faster form of gameplay, but it really comes down to personal preference. 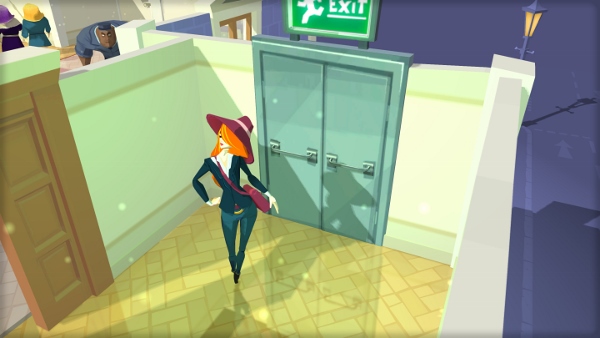 The levels tend to move at a good pace, becoming more difficult with each chapter. The Marvellous Miss Take walks you through the controls easily enough (without being painstakingly obvious) and introduces you to each character and their abilities appropriately. Around chapter three, the game seems to have a steep jump in difficultly, but players should be able to stick it out and cope with this. To advance, Sophia must complete each level in order. This becomes increasingly frustrating as the levels become more arduous. Large amounts of patience and tolerance is required to complete the campaign. Taking breaks and reaching checkpoints also aid in relieving some frustrations. The other two characters don’t have to work in this linear fashion, although can only access levels already completed by Sophia. As the difficulty of each level is more sporadic for these characters, it’s a relief to have the ability to jump around a bit.

The Marvellous Miss Take also caters for those desiring an extra challenge. Firstly, players can strive to complete each level with every character, unlocking the unique epilogues. If this isn’t enough, there are Steam achievements to be earned and extra objectives to complete including collectable, time and stealth challenges. 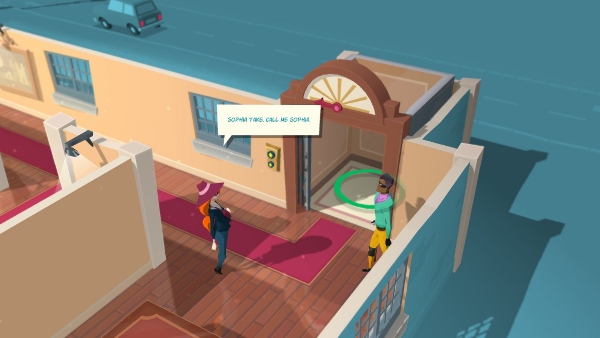 The visuals of The Marvellous Miss Take can be described as bright, fun, distinctive and unique. The modern cartoon (almost comic book) aesthetic of the world oozes with indie vibes, utterly matching the characters existing within. Each level and character sports its own sleek and stylised design, bringing out the personality in each location and avatar. There’s no need for insane graphics that push your machine to its limits. Hey, it’s not like they perform perfectly all the time anyway (just take a look at the glitches in Assassin’s Creed: Unity). What works here is the strong design concept consistent throughout the game. 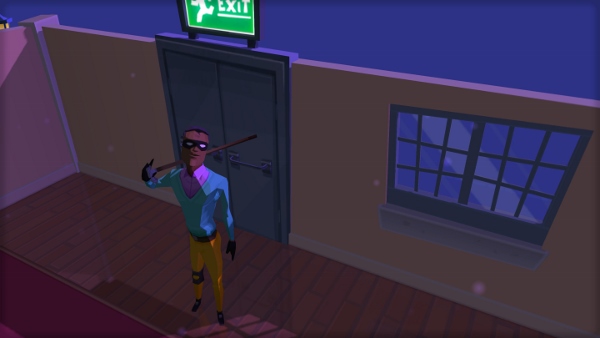 Stealing art is way cooler when doing so to laid back jazz. I would go so far as to say if anyone asks you to steal art to music that doesn’t involve scatty flute solos and improvised piano, you tell them to find someone else for the job. While there isn’t a huge variety in the soundtrack, you barely notice. The few in game sound effects, a dog’s sniffing or a guard’s warning shout, gives you just enough information about your surroundings to prove useful. It also helps as a reminder that you’re never totally safe, keeping you on your toes. The sound effects also carry an exaggerated, cartoon-like quality perfectly complimenting the visuals of the game. 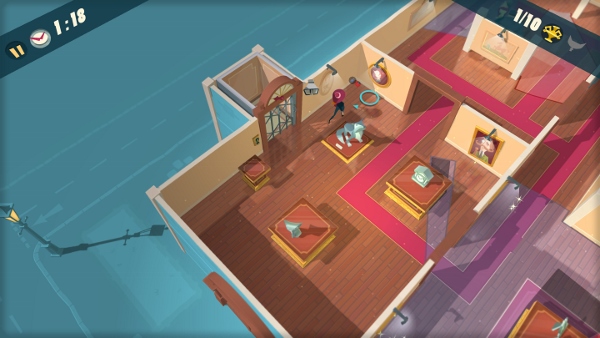 My time with the marvellous Miss Sophia Take has been a pleasurable one, if a little frustrating at times. The simple but ingenious game mechanics aids in creating an adventure that’s rewarding and unique: a true indie gem. While the story isn’t the most original or thrilling, the game sports a selection of quirky (if uncomplicated) characters that are hard not to love. Additionally the stylised design and matching sound track all help in the creation of a world that’s a humorous, a bit different and easy to enjoy. The Marvellous Miss Take also earns its success through its ability to offer something to all sorts of gamers, no matter their level or preferred style of gameplay.