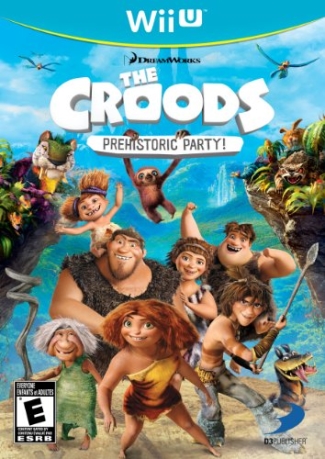 Overview
Intended to coincide with the release of DreamWorks’ new animated film The Croods, The Croods: Prehistoric Party! was released for all of Nintendo’s systems. Aimed at a younger audience, the game is looking to capitalize on two major criteria – the movie it is based on and the party game craze. So how does The Croods: Prehistoric Party! hold up? Does it venture to a whole new world or should it have been left in the stone age? Let’s find out. 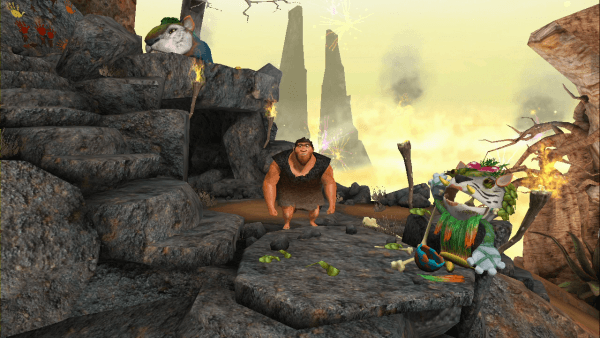 Gameplay
The in-game menu is the first thing you’ll notice playing The Croods: Prehistoric Party! The game actually does a few interesting things here. You’re dropped into the Crood’s cave dwelling as Grug (voiced by Nicolas Cage). You use the GamePad’s controller buttons to run around, jump, and explore the area. There are a handful of things you can do: visit the cave (your gallery), watch credits, play mini-games, or visit “areas” that are effectively game boards.

Younger players or fans of the movie will likely get a kick out of getting to see and explore the setting of The Croods. To other players, this is a neat way to handle menus, but a simple list would have done just as well for getting to the action quicker. 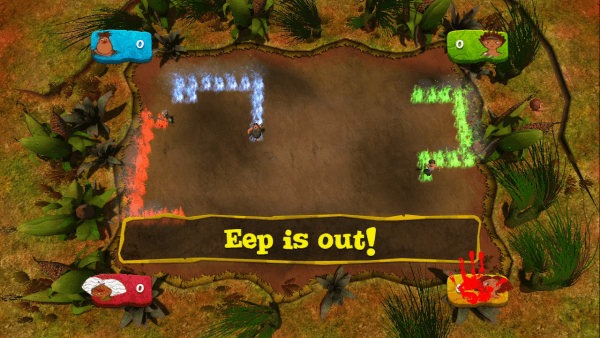 Once you actually get past the menus, the game becomes a bit more usable. Depending on which gameplay option you’ve picked, there are a few different ways to play the games. Right outside your cave is a rock with what looks like a prehistoric scarecrow. Approaching it will let you jump straight into playing mini-games. You can choose to either play a single, quick game or play between five and twenty mini-games in a tournament for ultimate Crood family victory.

If you venture further down into the Crood cave, you can travel to the Desert. This will let you go to a board game play mode called “Trailblazer” similar to Mario Party‘s Party Mode, where players race to the end by rolling dice and moving along the board. You can use some devious items to mess with your enemies along the way. You will also collect shells (instead of stars), but they serve no purpose apart from bragging rights. Playing through Trailblazer mode will unlock new areas and change something about your cave. There are five different areas to unlock and play through. This is by far the most interesting way to play the game, though less patient players will probably want to avoid it as it can be time consuming. 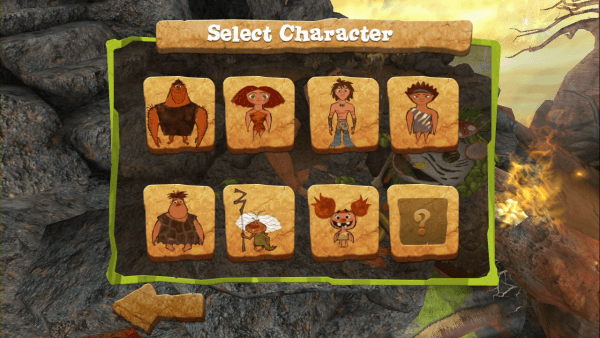 Within The Croods: Prehistoric Party! there are 30 different mini-games to play. The games themselves are all designed to be played as four-player free-for-all games. This is a shame in and of itself, as the 2v2 and 3v1 games of the Mario Party franchise could have given the title a bit more longevity, adding some interesting games to the mix. It’s also curious that the Wii U version of the game still only allows four players as other party games on the system allow up to five (given the GamePad and four Wii remotes). All thirty games can be played with a Wii remote – no nunchuk attachment required.

The games themselves range from decent to poor. Younger audiences likely won’t notice, but players familiar with the Mario Party games will likely recognize more than a couple mini-games they’ve played with a notable plumber before. Everyone will probably enjoy the frantic action of games like “Ramu Ram You” and “Fear The Fur,” while games like “Cave Painter” and “Dandelion Dash” feel like they serve as nothing more than filler space and should be avoided save for curiosity. 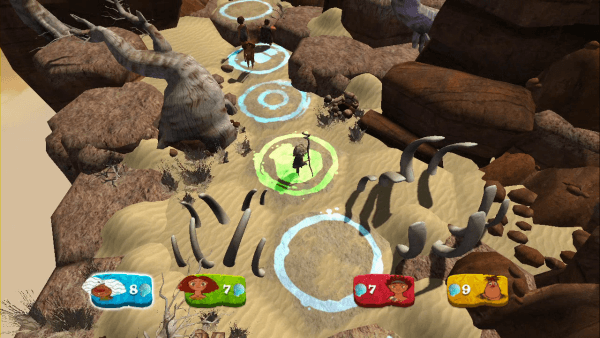 For each game you complete, you’ll be awarded with a “Prehistoric Point.” These can be used to buy a few mini-games that aren’t initially in your collection as well as art for your cave gallery. It adds some reward to playing all those minigames, though in truth it’s fairly meager.

Visuals
The art style of the game is pulled directly from the DreamWorks film. Characters look goofy and cartoony, just as they do in the movie. The environments are colorful, as are the imaginative creatures that inhabit the world. The models and textures in the game look ok, but given that the Wii U is technically more powerful than either the Xbox 360 or PlayStation 3, it’s a shame to see what are essentially high-resolution Wii graphics and effects upscaled to the newest console.

Audio
Prehistoric Party!‘s audio component is one of the game’s biggest mixed bags. The soundtrack in the game is full of fun, upbeat orchestral tunes with the occasional rhythmic chant. They’ll have you tapping your feet along with the beat as you play through each of the games. They never feel obnoxious or distracting either. 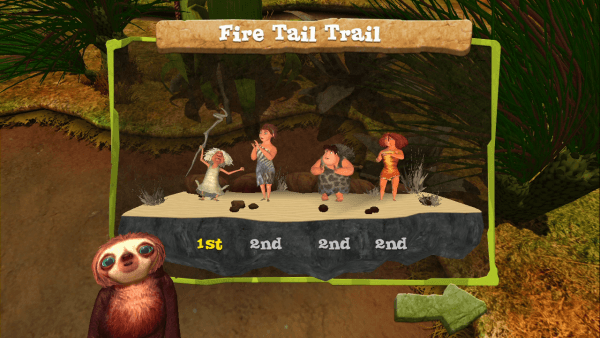 The sound effects in the game fit well enough. Chirps, cheeps, and growls from the zany indigenous life fit well with the theme. The sound effects unique to each game also feel appropriate – clattering of dice, cracking of shells, etc.

The voice work in the game is another issue. They make it a point to have some sort of little quip from a character at every possible chance. It doesn’t seem bad at first, but once you’ve heard characters repeat the same phrases ad nauseum, it can wear on your nerves pretty quickly. There isn’t much variety in what is said either. You can only take Thunk saying, “I have big bones,” so many times before you’re ready to shut him off.

Overall
Overall, The Croods: Prehistoric Party! is a crude mishmash. The visuals are colorful, cheerful, and inviting, even if they do lack polish. The music is fun and upbeat as well. Though everything is perfectly functional, the mini-games themselves are everything from Okay-but-done-before to boring and bland. The game is also brought down by terribly annoying menu design and some outright obnoxious voice work that’s driven into the ground.

A group of kids with a particular affection for The Croods will enjoy interacting with all the characters from the movie. Anyone else looking for a party game to enjoy should probably want to go elsewhere.