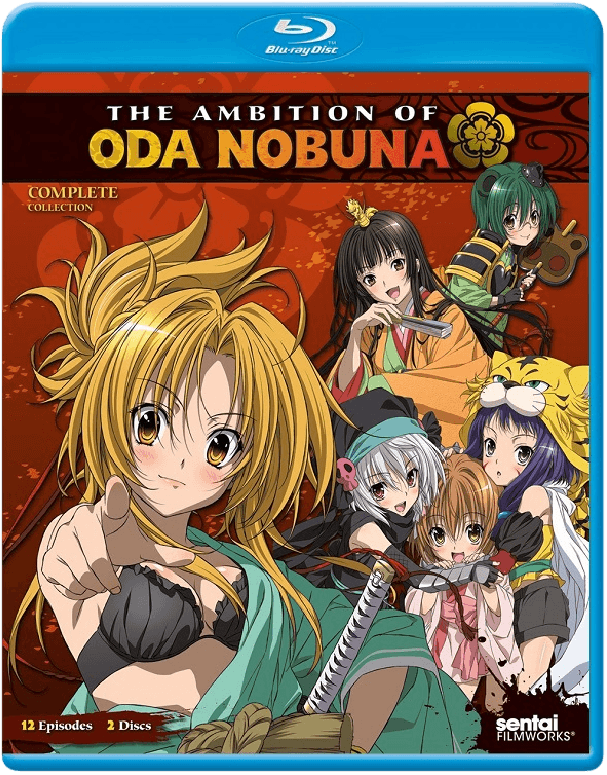 Overview
Iconic figureheads from the past and major events from a country’s history are ripe for the picking when it comes to creating a new story. There have been many light novels, manga, video games, and anime that have reached into the past and put a unique spin on history in order to give their audience something different.

Story
Yoshiharu Sagara has always loved playing video games focused on the Sengoku Era of Japan, especially Nobunaga’s Ambition. In fact he has played these games so much that he has almost encyclopedic knowledge about the way events unfolded throughout history. That is a good thing for him considering somehow he has found himself transported to the past winding up in the middle of a battlefield. 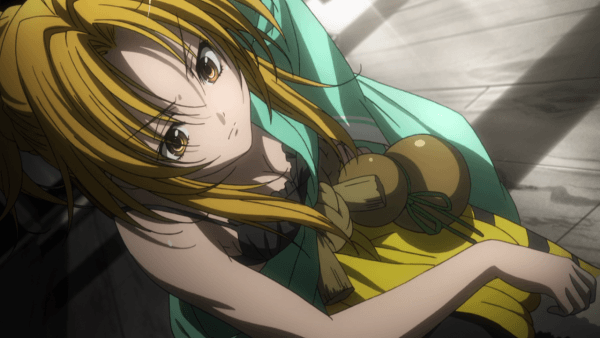 At first Yoshiharu believes that he is dreaming before being attacked by two enemy soldiers and saved by an unknown samurai. While running this samurai is hit by a stray bullet and makes Yoshiharu promise that he will carry on his dream, but unfortunately for Yoshiharu this samurai happened to be Toyotomi Hideyoshi, the man responsible for uniting Japan and ending the Sengoku Era. Not only does this mean that history has already undergone a drastic change, but it also solidifies Yoshiharu’s situation.

Shortly after Hideyoshi’s death, Yoshiharu stumbles upon a young woman about to be struck down by opposing forces and manages to stun them using a ringtone from his cell phone. Little does he realize that the woman he just saved happens to be the daimyo of Owari and this world’s Oda Nobunaga. Thing is, in this alternate world Nobunaga is now Nobuna, a hot headed female warrior and numerous other historical names including Katsuie and Nagahide are all now female warriors as gender plays no role in the leadership of a territory in this world. 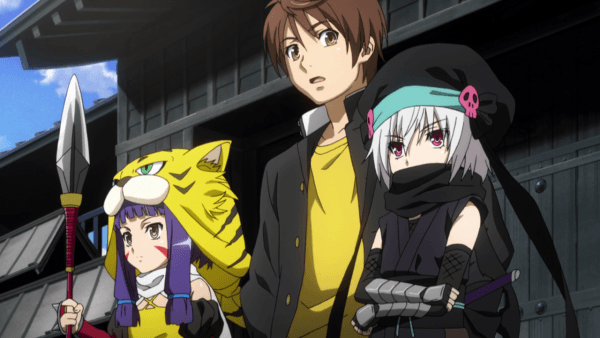 Stuck in a past extremely similar to his own, Yoshiharu is rewarded for his efforts on the battlefield by Nobuna and hired on as a lowly sandal-bearer by Nobuna. Despite his positioning and the fact that Nobuna has decided to call him Monkey thanks to his middle name being Saru, Yoshiharu realizes that with this world’s Hideyoshi dead, he must now try and take his place and with all of the knowledge from the future, he is more than willing to prove his worth.

What makes The Ambition of Oda Nobuna interesting is the fact that Yoshiharu is not only willing to use his knowledge but also ready to throw himself in harm’s way to try and change things, making him far different than your standard male lead in series such as this. He is confident enough to stand directly in front of a blade in order to gain an ally using his knowledge and by doing so he makes himself an invaluable resource to Nobuna, though the constant promise of a “beautiful girl” as a reward does help motivate him. That being said, there are a number of historical events that appear in the story but for those unfamiliar with history, either the series’ narrator or Yoshiharu often give context to the events to keep the viewer informed. 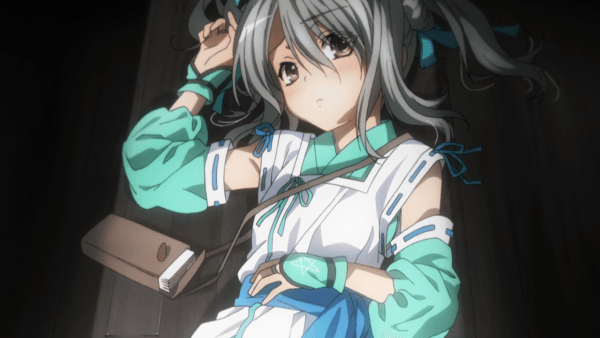 This especially helps with the number of characters that are introduced throughout the series as The Ambition of Oda Nobuna not only introduces most of the gender-bent prominent warriors of the time but also explains their relation to various members of the group as well as history. This establishes the cast as more than simple girls centering around the male lead which is a far cry from series such as this one as each character has their own role to play in the story.

Despite the amount of girls in the cast, the actual feeling of a harem is rather low since many members of Nobuna’s inner-circle clearly acknowledge the fact that the two develop feelings for one another over the course of the series. Initially Nobuna only see Yoshiharu as a pet monkey with a few tricks but as he continues to prove his worth to her and promise that he will always be there for her, we see that her feelings begin to change as she constantly believes in his ability to come through for her and sees him as her best support even if the actual romance doesn’t progress much farther than a number of tsundere moments. 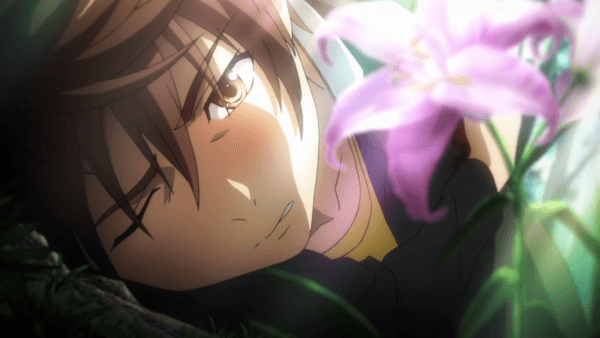 What makes the story interesting is the fact that since Yoshiharu is willing to use his knowledge; he also ends up changing events from what he knew in the past and puts his life at risk to do so. Because of his interference, various prominent names that should have been slain remain alive and a number of times his knowledge is proven wrong thanks to alterations with history having long-reaching affects. These moments generally play out as comedic as one of Nobuna’s other retainers steps in to correct his mistakes. 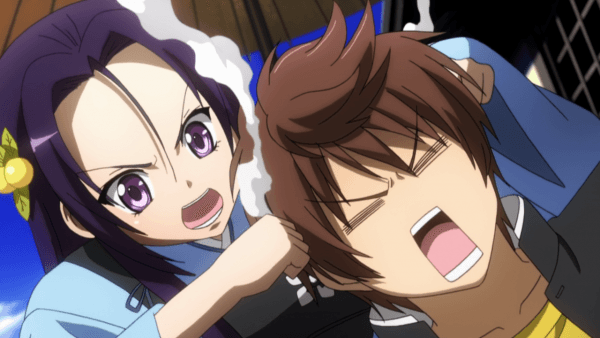 There is a decent balance between comedy and serious events in the series as the tone will generally shift often within an episode. Thanks to Nobuna being at war, numerous territories are obtained through combat using various strategies and knowledge of the future and various schemes by her enemies are implemented throughout the course of the series. This is especially in the latter half which sets itself up for a series of life or death battles centered on defeating Nobuna’s forces for good, culminating in a great finale for the series that leaves viewers hoping for a continuation.

Visuals
Animated by Madhouse and Studio Gokumi, The Ambition of Oda Nobuna is a gorgeous looking series. Every character, including basic named side-characters, has unique looking and memorable designs all the way from the way their faces are designed to the details of their armor and all of it feature vibrant colors that look amazing on Blu-ray. Each character is impressively detailed and this detail carries over impressively well into the action scenes without any drop in quality. 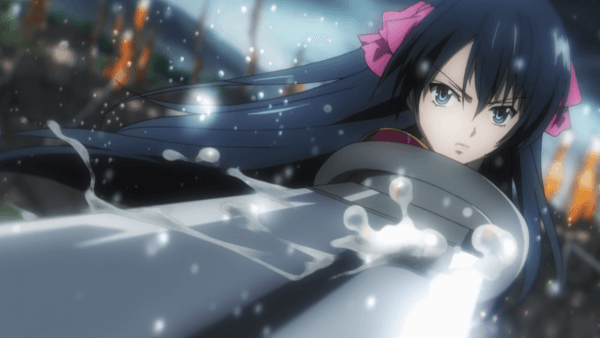 These action sequences vary from simple cavalry charges to infantry combat and even the use of rotating arquebus lines ahead of their time and even though these battles scenes tend to be fairly short, they are a real highlight. As far as the fan-service goes, this series is surprisingly light on that front as the only source of that fan-service comes from either Yoshiharu’s brief fantasies or some minor breast bouncing from Katsui that more for humor than anything else as it causes her chest armor to bounce separately from the rest of her armor.

Audio
Now with Sentai Filmworks’ release of The Ambition of Oda Nobuna they have included their own original English dub and released it alongside the standard Japanese dub. Unfortunately the English dub cast tends to sound like they are simply going through the motions with many of the serious or intense scenes, detracting from the experience. As such those the Japanese dub would be recommended this time around as the original cast handled their roles incredibly well and fit their characters perfectly. 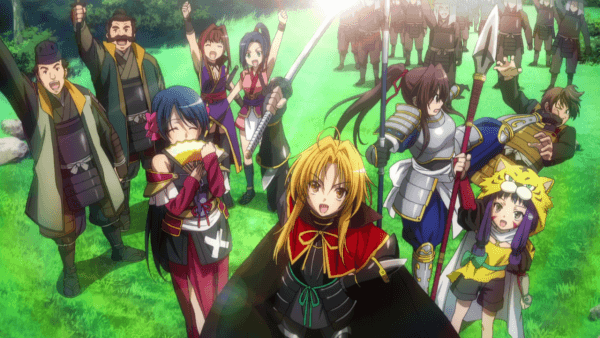 The background music used throughout The Ambition of Oda Nobuna is fitting for the time period that the series is set in which is a nice touch as it works well with the theme. It is worth noting that the Atsumori sung by Nobuna during the earlier half of the series is voiced over in English in the dub, which isn’t quite fitting considering the tone of the song. As for the opening and ending themes, the opening theme “Link” by Aimi is an enjoyable rock-based song set to an impressive action packed opening sequence while the ending theme “Hiarki” by Makino Mizuta is a slow simple song that works well in context and also provides a bit of fan-service.

Extras
The only extras included in this release of The Ambition of Oda Nobuna are a clean version of the opening and ending theme as well as some trailers for other Sentai Filmworks series.

Overall
The Ambition of Oda Nobuna may not feature the best English dub as it is serviceable at best but thankfully the Japanese dub is remains intact and presents viewers with a unique take on Sengoku Era history. By keeping Yoshiharu as a confident lead using his knowledge of the era to help Nobuna and her vassals overcome the odds through combat and diplomacy while building a believable relationship between the two and keeping him on his toes as history changes around him, The Ambition of Oda Nobuna provides a refreshingly entertaining experience and perhaps the best take on the gender-bent history theme you will find.