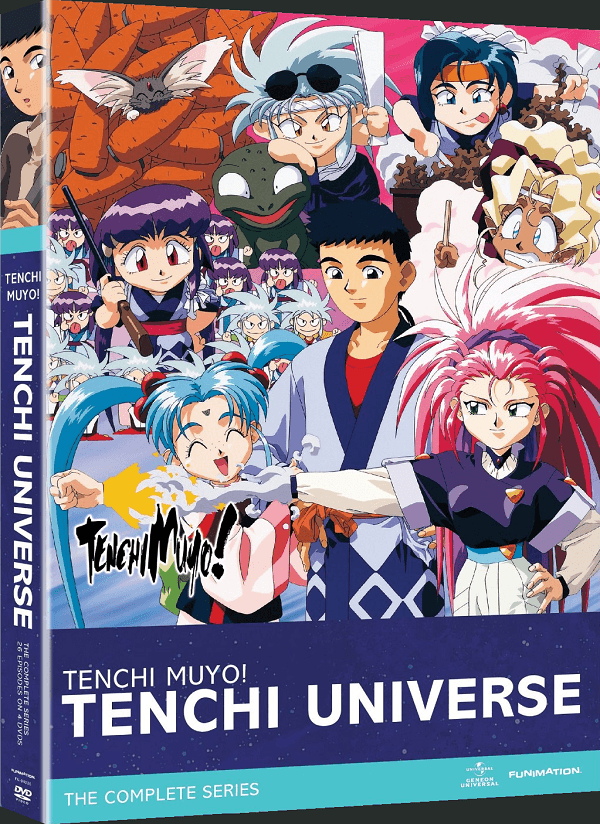 Overview:
There are a number of anime that people will mention whenever they talk about their introduction to the media. Now while some people may have been introduced to anime through something like Dragon Ball Z, there was another series released in North America in 2000 that was unlike anything we had seen at that time. That series was Tenchi Muyo!.

Tenchi Muyo! can easily be heralded as the series which introduced the harem genre to English speaking fans and many anime fans today have fond memories of the series, which was broken into three separate tales.  Now that FUNimation owns the license to Tenchi Muyo!, the company has released the second Tenchi series, Tenchi Muyo! Universe in one DVD package, is the series just as good as fans remember it?

Story:
Tenchi Misaki is living his life like a normal teenage boy who happens to live in a house with his father and grandfather. While his grandfather helps tend the Misaki Shrine nearby and his father works as a house designer, Tenchi is a quiet young man who is used to living a standard life. Of course that standard life is suddenly changed when two spaceships crash into the forest nearby his house. 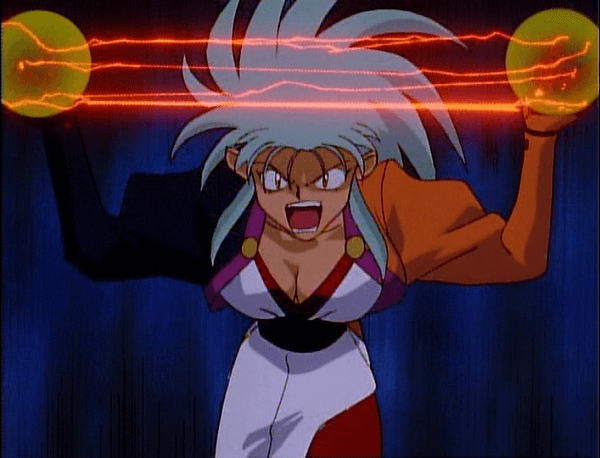 When Tenchi goes to investigate the disturbance, he finds that a beautiful, albeit drunk, woman is unconscious near the wreckage. When she awakens she informs him that she is called Ryoko and that she is being chased by a terrifying space pirate. When the pirate in a robotic suit suddenly bursts through the trees and starts shooting at Tenchi and Ryoko, he simply acts on his instincts and runs away only to be saved by a soda can and a cliff.

When Tenchi takes Ryoko home she is quickly accepted into the household, however when the pirate shows up once again and the robot suit is destroyed, it turns out that the pirate is actually a Galaxy Police officer named Mihoshi and Ryoko is the wanted space criminal! Unfortunately for Tenchi, both Ryoko and Mihoshi are stranded on Earth thanks to the fact that both of their ships were destroyed. 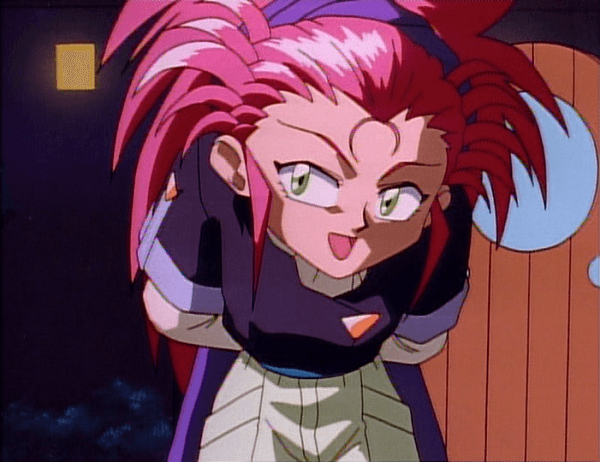 However when rescue comes in the form of a Princess and her younger sister from the planet Jurai, things begin to escalate at a fever pitch and Tenchi’s normal life quickly turns into a rollercoaster as the universe’s most famous mad scientist and an ace Galaxy policewoman all come to live under the Misaki roof. Can Tenchi deal with the crazy hijinks of these beautiful women from outer space and a journey that will take him into the deepest depths of the galaxy? 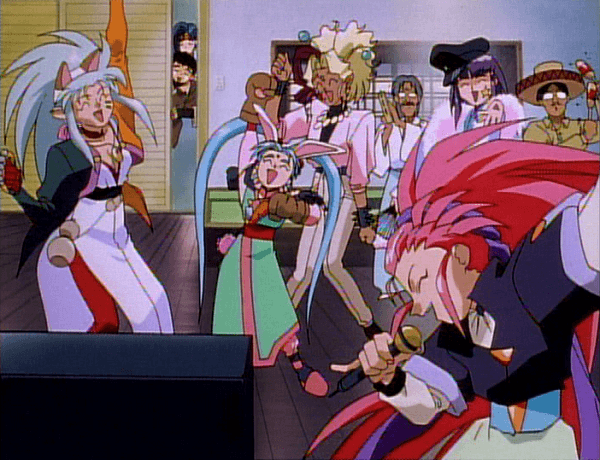 Techi Muyo! Universe quickly lets the viewer know that a number of things are different from the past Tenchi series and it is in fact its own individual storyline. As such a few characters’ personalities and backstories have been adjusted, a new woman is introduced and the plot takes a much different turn than the past series.

As far as Universe itself is concerned, it can be seen as one of the best Tenchi series around as it not only offers us the best of what the harem and romantic comedy genres can offer but it also does it in such a lovable way that it is absolutely impossible to forget. The rivalry that quickly builds between Ayeke and Ryoko as well as the other girls surrounding Tenchi is one of the highlights of the show as well as all of the comedic moments throughout this twenty six episode series. 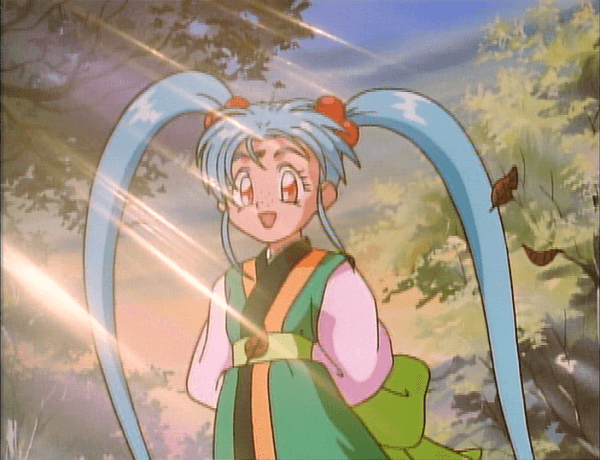 Of course there is plenty of drama to keep the story moving at a decent pace and provide structure for the show. In fact, Tenchi Muyo! Universe is one of the few series that manages to provide non-stop comedy but also a lovable cast of characters that never feel stale throughout the show, making Tenchi Muyo! Universe an absolute joy to watch.

Visuals:
With Tenchi Universe arriving on DVD, the show does receive a visual improvement compared to the original VHS version of the series, however the age of the show does come into play with this upgrade. Before we go into the transfer however, Tenchi Universe is a beautiful looking show with plenty of bright colors, beautifully drawn backgrounds and impressive animation for a series that still relied heavily on hand-drawn animation. 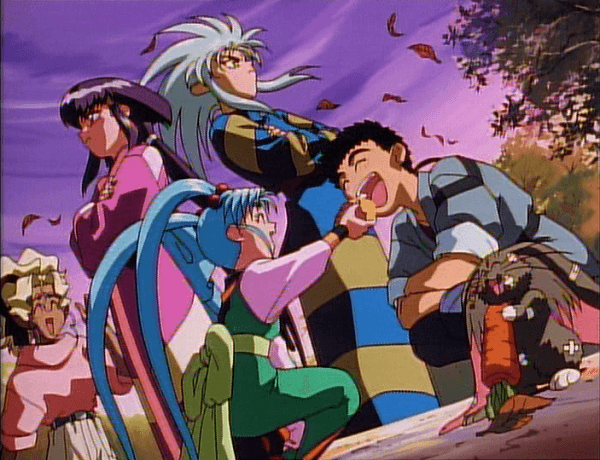 As mentioned earlier however, the series does take a rather big hit as far as quality goes on these DVDs. Many episodes feature a noticeable amount of grain and fast moving scenes tend to appear rough or fuzzy thanks to this. While it is unfortunate that Tenchi Universe’s upgrade to a more modern format didn’t go as smoothly as we would have liked, it still is an excellent looking show for its time.

Audio:
Thankfully FUNimation has managed to retain the original English voice work for the series and as such, fans of the series will be able to enjoy their favorite characters exactly how they remember them. Of course for newcomers, the voice work was recorded back in 2000 so it isn’t quite as clear as most English dubs recorded nowadays and the original Japanese dub is included with the release. However the voice work itself is still very well done by the English cast and fans of the series wouldn’t have it any other way. 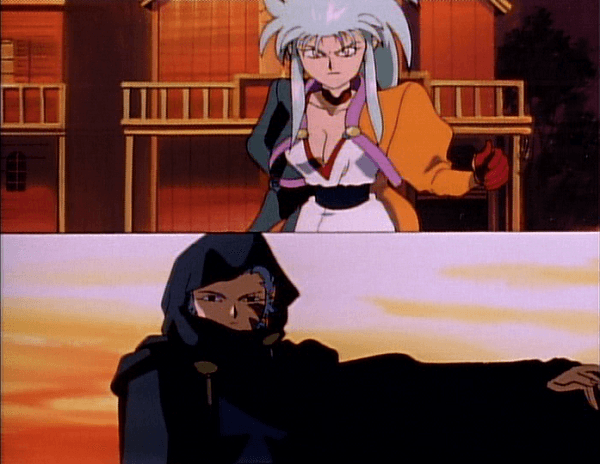 As far as background music goes, Tenchi Universe has a number of catchy character themes and tracks which play throughout certain moments throughout the series. As far as the opening and ending to the series go, Tenchi Universe actually features a splendid English opening and ending translation of the original Japanese songs, though viewers can choose to listen to the Japanese songs instead by changing the voice track to the original Japanese dub.

Extras:
Given the age of the source material, it is somewhat expected that bonus features be slim with FUNimation’s release of Tenchi Universe, however the fact still remains that their bonuses for this release can be seen as bare bones at best with only basic offerings that seem to have been included as an afterthought. 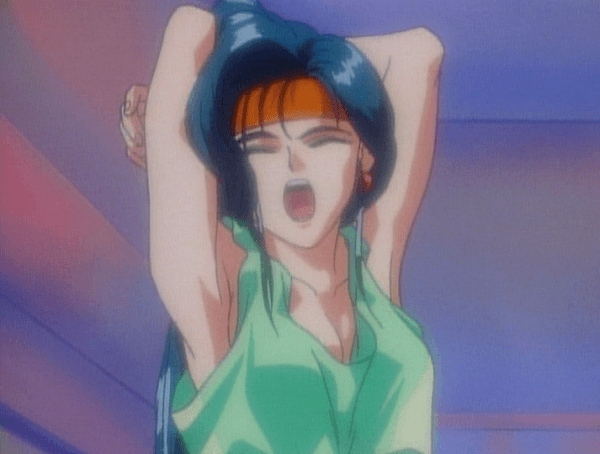 We have your standard US trailer for the show as well as trailers for past and upcoming FUNimation releases, plus a clean version of the opening and ending song which can be played in either English or Japanese depending on your preference. It is worth noting however that despite there being three different ending animation sequences, one featuring Ayeka as the focus, one with Ryo-Ohki and finally a volleyball one, only the volleyball one is provided.

Overall:
It is easy to see why Tenchi Muyo! Universe is thought to be one of the all-time great anime series that should not be missed by anime fans and while this release may be rather barren as far as bonus features go and the transfer to DVD isn’t quite as smooth as many would have liked, fans of harem comedies would be doing themselves a great disservice if they chose to pass up this latest release of Tenchi Muyo! Universe. Returning fans will still find it an improved version of what they fell in love with over a decade ago while new viewers find themselves laughing constantly but also falling in love with the amazing characters found within Tenchi Muyo! Universe.