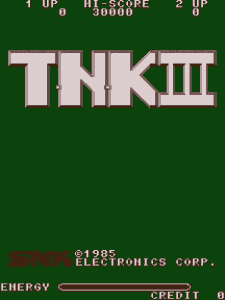 Man, there are quite a bit of arcade re-releases at the moment. Apparently that seems to be the business right about now. With that in mind, it’s time for another downloadable re-release review with tank battles the focus of this review. Get ready for a grand war as you, the player, cross through different terrain to battle ground troops, other tanks and homing missiles in T.N.K III. This 2D vertical scrolling tank game, developed by SNK, was released in arcades in the mid 1980’s and now appears as part of the Playstation minis range. It features classic tank gameplay, delectable 2D graphics and retains the 8-bit music. However, is it worth downloading? 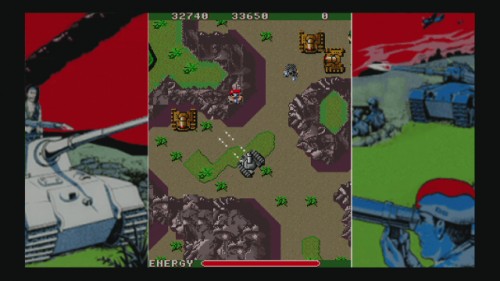 Gameplay
T.N.K III is a standard 2D top down shooter, only this time you control a tank. Your objective is to get from one end of the map to the other. Plain and simple. However, there is a whole army of ground troops, tanks and other gun stations trying to stop you in your tracks. Trust me, they will try everything. The tank’s main weapons are the machine gun (press X) and a cannon, which fires a shell (press O). The controls are Ok but can be awkward due to the original control set up. The game used a rotary joystick when it was released in the arcades. Due to a lack of such, to turn the cannon, you have to press L1 and R1. This is a little awkward at first but you do get use to it. Of course, like every game in this genre, you will be able to collect power ups. They include better tank shells and extra energy. I do have to add, however, that it is a necessity to survive on the first tank because the power up will help you immensely in the later stages of the game. If you have played Ikari Warriors or Iron Tank (the sequel to this game), then you will be familiar with the style of gameplay.

Just like Alpha Mission and Vanguard II, another arcade re-release from SNK which I will review, the game offers you four difficulty modes: Easy, normal, Hard and Hardest. But no matter the difficulty you decide to choose, expect a tough road to victory. A common motif with these arcade games is the idea of having too much projectiles on the screen at the same time. Tank shells, bullets and homing missiles could be on the screen directed to you. Other than that, it is excellent gameplay. You can also run over the ground troops, which reward you with a little extra health. More often than not you will be squashing those men. Is it sadistic to say that I enjoyed it? Overall, the gameplay is excellent and fun. 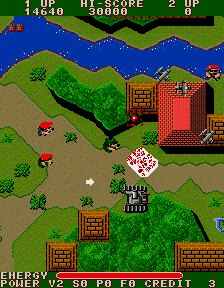 Visuals
The visuals, since this is a direct port of the arcade game, it retains the classic 8-bit graphics. The colours are bright and variant. As the tank progresses, it will pass different terrains, like forests, lakes and even a statue. The enemies are small, so don’t expect any sort of facial details, but they do have different uniforms to distinguish themselves from their brethren. You will see a flow of men in green and grey (with red caps). The tanks are also coloured differently depending on their cannon fire. There are brown tanks, green tanks and even blue tanks. The level design is well though out, giving the player space to manoeuvre, which is very important in this game. Overall, the visuals are great for its time. 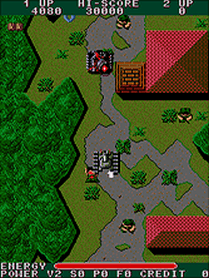 Music
The music sent me on a nostalgic trip. I love the old school 8-bit sound effects of the game. The explosions have that Atari feel, the machine gun fire is like an 8-bit train speeding on the tracks. The cannon fire is a massive thud when launched from the tank. Other familiar sounds include the launch of a missile from the lake, which is a warring sign of heavy damage and, for some odd reason, the death sound when a ground trooper dies reminds me of the death sound of Pacman. I could be pushing it, but it does remind me of that classic death noise. But what about the background music? Well, there isn’t any background music when you play, which is quite cool. There are so many sound effects, there is no point on having that background music. Overall, the 8-bit music is awesome due to the nostalgic effect it has one me (and others no doubt).

Overall
Yesterday, I recommended Alpha Mission for everyone who enjoys space shooters, retro games or both. Well, I can say the same thing about T.N.K III. I believe that this is a great game worth paying the $2.99 they ask for. The gameplay is absolutely fun, the visuals are outstanding for the time and the music will send you back in time… in your mind. If you love this sort of gameplay for just want to play it for the mistalgic factor, then go sign in to (or sign up for) the US Playstation Store and buy this game. It is a purchase you won’t regret.