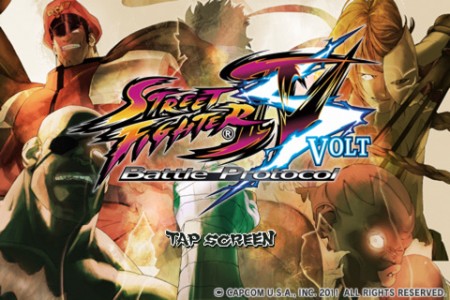 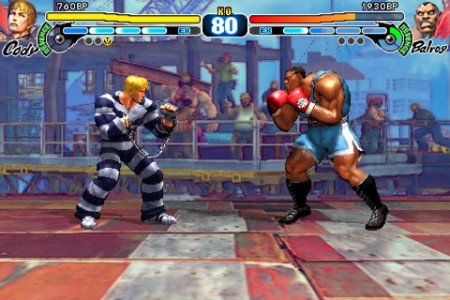 From the second you click on the icon, you know you’re in for something special, mainly because that something special is all wrapped up in a beautiful looking package. Super Street Fighter Volt: Battle Protocol is a feast for the eyes and it’s presentation rivals the home console titles. A high quality opening video greets players before leading them to the main menu, which is coloured brightly and animated smoothly. Music is loud and adrenaline-charged and grabs the player’s attention. The art direction is beautiful and navigating the menus is a breeze. During game play the pause button is easy to reach in the top-middle of the screen, and a command list is easy to access that is shown in a simple and easy to manner. A superb soundtrack, only surpassed by its spectacular voice acting and sound effects, supports all this. The font is awesome and seeing it pop up as your perform combos and saying words like ‘You Win!’ And ‘K.O!’ feels really rewarding. Players are given loads of content such as the ability to save replays and gain achievements. Players are also given alternative modes such as a combo challenge and a survival mode, to ensure you’ll be sticking around for quite sometime. Unfortunately there are no bios or story elements shown in the game, so we don’t ever really know much about the people we’re playing as. It’s not a hugely important aspect, especially since Street Fighter is more focused on arcade action rather than telling a cinematic story, but it would’ve been a nice inclusion, even if it was just a paragraph of text. Instead we get some pretty lame trash talk sentences after fights, but hey at least its something! Street Fighter Volt is an amazing game by itself, but it is also presented with such an inviting manner that you’ll never want to leave it or put it down. I honestly doubt I’ll ever see an iphone game that presents itself as well as this for quite some time, it’s truly a work of art. The only downside to all this is that it has a MASSIVE file size of 382 Megabytes, but I suppose that’s the trade off to having such a high-quality game with so much content.

Volt uses the same fighting system as the console editions, and it contains the same solid feel that has translated beautifully to the iphone. Yeah so that means you got to win the best of three rounds by beating up some other dude and destroying his health bar, but you already knew that….right? For those unfamiliar with the latest Street Fighter engine, Super Street Fighter 2 massively influences it. So this means going back to the basics and focusing on strategy and tactics by out –thinking your opponent and striking them as a timed response. For example if your rival is performing a jump kick towards you, that’s a perfect opportunity to punish their manoeuvre with an uppercut or Ryu and Ken’s signature shoryuken attack. On the other hand combos are a big deal, but their not huge like the ones seen in Marvel Vs Capcom although they can get lengthy if you’re a pro, but on the most part your wanting to string together 3-4 well placed consecutive hits in close range to send the flying father away, and performing counter attacks, blocks, and waiting for an opening while defending against an assault leads to alternative ways of placing well-timed attacks on your enemy. This is a common standard these days, but Street Fighter pretty much started this all back in the 90s, and is arguably still the masters of it today. Street Fighter IV however does have a few influences from Street Fighter III Third Strike, and also introduces some new features to spice up the gameplay. The title ditches the anime-sprites for 3D models, such as the focus attacks, which charge and can knock down an opponent and give you a free hit. The biggest thing however is namely the inclusion of not one but two special gages: the Super Combo Gage and the Revenge Gage. Long story short, super combos are pretty cool and build up the more you hurt your enemy and perform special moves, while the more you get hurt the more your Revenge Gage builds up, and once filled you may perform an Ultra Combo which are well, ultra awesome. These also add another level of strategy to the action, which only makes the game even more fun to play. When performing a cool move like these, the camera will break from its fixed position and show you the fighter preparing for the attack in true anime-styled fashion that really intensifies the moment.

All of this action that was in the consoles has been ported to the iphone and it feels wonderful and very familiar. The only major difference between the iphone version and consoles besides a few missing characters and such and obvious graphical cutbacks is the control scheme. The port keeps the eight-way directional system for movement, but as for attacking rather than being a six-button fighter, it is now a four-button fighter much like the 3DS version. Players get a punch button, a kick button, a focus attack button and a special attack button. Now rather than having to input various combinations of buttons to perform a special attack, they can now be preformed by either just pressing the button, or holding the directional stick in one direction and pressing it. This more simplified control scheme not only makes it easier to control on a touch screen, but also makes it easier to play and more accessible to casual gamers and new comers. However, while it can be easily used to spam attacks, players will realise doing so will make them predictable and easy to out-think and be defeated, so it is actually discouraged. Therefore it doesn’t really ruin the gameplay as players will often not want to abuse it. Simply tapping their gages as well can perform Ultra Combos and Super Combos, and being able to perform such devastating attacks so easily is quite rewarding.

Capcom should be commended on the controls for this title, as they work perfectly. To make things better, I have to say that the on-screen joystick is one of the most accurate I’ve ever used in an iphone game. Many these days seem to struggle, which in a game like this is highly important, and Volt has it down flawlessly. To top it all off, the weight of all the 17 characters feels right, and the balance is quite good, although amateurs often will just pick either Ryu or Ken and stick with them. However if you look into the rest of the roster, you’ll see how everyone plays almost completely different to each other and has various different styles, so playing with a different person will really effect the gameplay and overall feel of the game. This is very rare in fighters these days and its great to see such variety. In conclusion, playing solo is amazing. 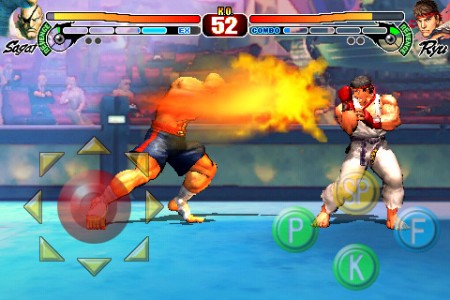 Unfortunately, playing online isn’t as impressive. Online Verses is very hit-and-miss, and ranges from great to terrible. Sometimes a game will run quickly and smoothly, and those matches are really fun. Sadly, a little bit more than half the time it isn’t as good. Some matches will be basically unplayable due to constant lagging, and the frame rate drops so low that you’ll actually get bored waiting for a punch to connect. Sometimes however the game will run more smoothly, but in those you can expect a lag between when you press your attack button, and when your character will actually perform the attack. This destroys the gameplay as Street Fighter is all about timing the execution of your moves. However what hurts Online Verses the worst however, is rage quitting. It is so easy to leave a game all thanks to the iphone’s home button. Pressing it will disconnect the game and make you leave, ending the game. The worst thing about it though is players who do this aren’t punished, and it doesn’t effect their gamer card score. So therefore its really easy to cheat, and there are a LOT of sore losers out there who are more than willing to do so to steal your victory away from you. However its not all bad, and the games that do work are actually a lot of fun, plus there’s much more to explore as well. You have the Wondering Warrior mode where you can upgrade an avatar and record stats, as well as a Challenge Bingo where you can even exchange points for stats. Overall, the online section of the game features some interesting content and aims to entertain and reward the player, but is only fun about half the time as the other half contains a bit of lag and a few issues. If this can be addressed in a future update however, this can be a massive hit and loads of fun, as it does show a huge amount of promise. 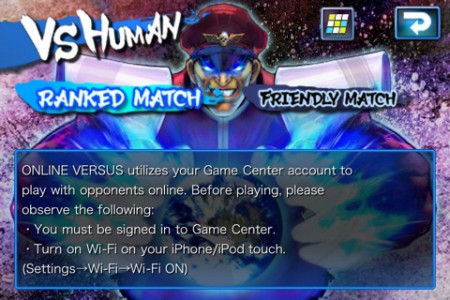 Capcom are a cleaver bunch! In order to maintain the beautiful character models from the original console games, it appears rather than including full 3D models into the iphone version, they have taken stills of the fighters from the console versions and used them as digitized sprites. It works well as the characters have rich textures and detail, although some edges of the can look a bit rough at times, but the animation is fluent and smooth so most of the time you won’t notice this. The bright colours, detail and anime-inspired design compliment the game and works wonderfully. While the backgrounds are just simply stills, they still look nice. Same can be said about the soundtrack. Its synthesized adrenaline-charged beats maintain a catchy, enjoyable feel to them, that represent the art style and gameplay by maintaining this old-school-meets-new-school feel to them. The sound effects are flawless and when you hear that classic Street Fighter sound effect of when an attack hits your opponent you feel a sense of a little victory inside yourself and can’t help but smile. Same can be said for when you select something in the menus. What is most impressive however, is the voice acting. Most characters may only say two sentences throughout the entire game, but they are of very high quality and further expand on the personalities of the characters beautifully. 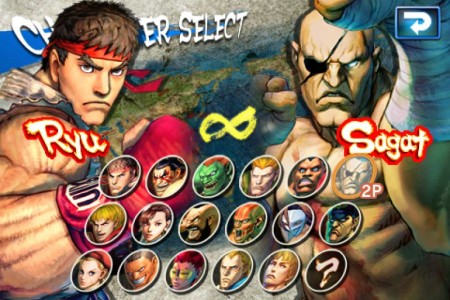 Super Street Fighter IV: Volt Battle Protocol is an amazing game and is hands-down the best fighter on the iphone and ipad, and definitely one of the best games on those devices. The presentation, graphics and audio are amazing and the controls are flawlessly tight. It has 17 very different characters and they’re all well-balanced out, and there is a stack of content and alternative modes to keep you around. However, if you already own the original Street Fighter IV for a iOS device, the question is ‘how big of a fan are you?’. Your paying for the exact same game just with three new characters and the ability to play online, but the online system is flawed. Volt relies on promoting itself based on its online play, but with it’s rage quitting issues and the amount of games that have lag its questionable. If Capcom release a patch to fix this however, it’s a must buy even for owners of the previous title. Never the less, even without online play Super Street Fighter IV: Volt Battle Protocol is a must-have for any fighting or action game fan. It has set a new standard, and the standard is quite high. A near-perfect game. 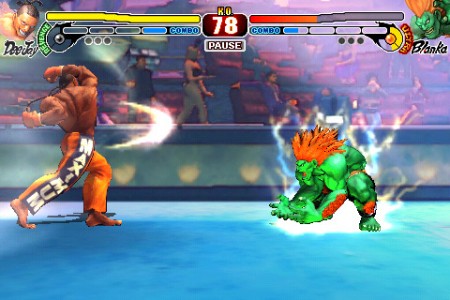