Overview
Infinite Ammo is a side-scrolling shoot-’em-up in the same vein as Contra and Metal Slug. Light on the story, heavy on the alien evil hordes. You’re a Space Marine. You’re captured by aliens. You apparently escape and find your weapons and armour laying around, and are looking for some payback. That’s about it. The story is drip fed to you in little cut scenes, consisting of a few pretty images and some text. Apart from that, “shoot the bad guys” is gonna have to suffice. 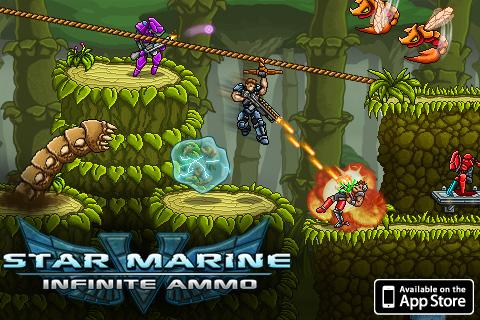 Gameplay
The controls are simple. You have a d-pad on the left allowing you to move left, right, and crouch into a “prone” stance. Then on the right hand side of the screen, you have a jump button, along with an aiming/shooting stick.

In true retro-old-school-new-school style, however, you can only aim in 8 directions; up, down, left, right, and the diagonals at 45 degree intervals. This was probably fine in the old days when there were no analogue sticks in sight, but there are many people out there that have come to expect more controllable aiming controls in a twin-stick shooter.

If you’re a fan of those older titles, and don’t mind the frequency of not being able to shoot at a guy when he’s between the 45 degree intervals, then I’m sure this won’t be an issue for you. Otherwise, be ready to shout “BUT HE’S RIGHT THERE!!!” at your iOS device of choice. There’s a second mechanic which seems to compound this problem. When you’re falling (or jumping), shooting will slow your descent. Now while on paper this sounds fine, and would serve to help you out in combat, there are certain paradoxical moments that arise through gameplay until you learn to deal with them… 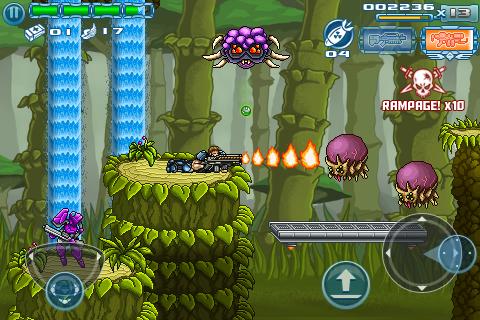 Because you cannot fire directly towards a bad guy, you hardly ever want to be in the air. When you’re in the air you lose a lot of mobility, and therefore cannot easily reposition yourself to be able to shoot what you want to shoot at. As your descent is slowed when you shoot, this means that bad guys you cannot currently reach, but are below you will be unreachable for quite a while until you decide to stop shooting and drop to the ground.

While these issues can be overcome by the player by a lot of practice and hard work, or previous experience of playing Contra etc., any newcomers to this style will find it very difficult to work with. There are bigger bad guys, boss arenas, that kind of thing… and as they tend to be bigger or move across the screen a lot, they’re actually easier to hit than the foot-soldiers, until you get to grips with the aiming controls. These boss battles vary from insanely hard to absurdly easy, depending on what upgrades you’ve unlocked. 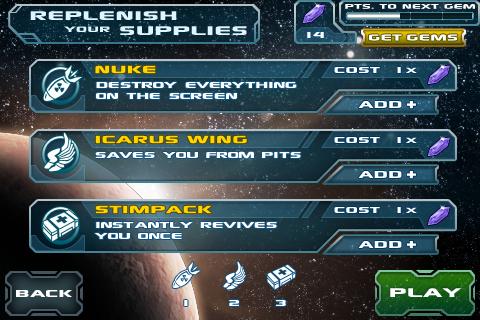 As you play through the levels you are awarded gems, in a leveling system based on how many bad guys you take down. However, the rate at which you receive these gems simply isn’t fast enough to keep up with what upgrades you need to complete some of the levels. This could be a cunning ploy to push you into making in-app purchases to get these gems, and therefore upgrades, in a more timely fashion.

They also have an “Earn Gems Free!” option which lets you watch a video advertisement in exchange for one gem a go. At the moment each video is 15 seconds long, so gaining gems this way doesn’t take too long, if you don’t mind mindlessly tapping the buttons to star the next ad 4 times a minute. The upgrades themselves include an array of weapons (from rocket launcher to “Storm Cannon”), each of which has 3 levels of upgrades of their own. Hidden right at the end are things like health increases and speed boosts, that kind of thing.

There’s also a screen for buying Nukes (destroys everything on the screen), Icarus Wings (saves you from falling off the screen), and Stimpacks (auto-revives you to full health once per stim), which are crucial for making it through some of the harder levels.

Audio/Visual
The music for this game is pretty good. It has an old-school synthy vibe to it, and fits the game’s milieu well. Some of the sound effects are a little basic, but they get the job done alright. The visuals are good quality, too. The menus look great (though a little buggy), and the cut-scene images are nicely realised. The in-game graphics are in the pixel-art category, but are decent overall, borrowing from the style of Contra and similar games. Unfortunately there were some animations that rotated the sprites, which, while making the animations more fluid, tended to tear the images, making them look a bit ugly in the transitions. However, the look of the game was very run-of-the-mill in style; while it may have that classic look and feel to it, everything’s a little too familiar and bland. 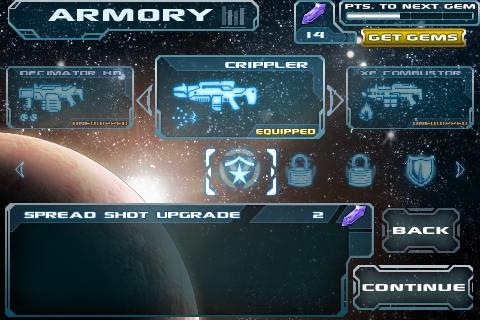 Overall
I think fans of the Contra-esque games will love this title, and be happy to have such a nostalgic game on their iPhone. But the rest of us will have a tough time adjusting to the control scheme. That being said, there is some fun to be had in upgrading your weapons and stats as you go along, and finding satisfaction by making it through those tougher levels.

In my opinion, however, the controls and non-descript style of the game doesn’t draw me in to the game, and even when I’d adjusted and upgraded to get past the hump, the rewards just weren’t enough to keep my interest.