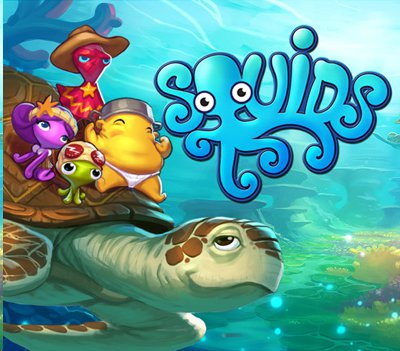 Overview:
Moving a game from iOS to PC can be a very difficult thing to do.  On one side it can be as easy as porting the same thing, though micro-transactions may prove different or useless for PC.  On the other you update the game and add to it, so that there is indeed more to provide for a possible higher cost.  So, how did Squids handle the transition?  Read on to find out.

Story:
Squids PC keeps on the straight and narrow in terms of story.  The game features the same story that fans for the iOS version enjoyed, as well as the bonus content that didn’t release until later for iOS.  So, the game isn’t really designed for iOSers, but those of us without app phones that enjoy casual gaming on PC.  The story is pretty amazing though with an adequate amount of character detail, though for 21 missions it did seem kind of lacking as some of the missions don’t relate to the plot at all.

For those not clued, in the basic story is that a set of squids go looking for treasure amongst the ruins of old temples and witness the release of a black ooze that has taken over whatever sea life it has gotten its drippy goo on.  So the adventurers must now fight the possessed to escape and try to bring the guard to quell the infestation.  Only problem is, that’s easier said then done, so the heroes are now in the middle of solving the problem themselves.  Though this doesn’t keep them from finding enough down time during travel for a few side-like missions. 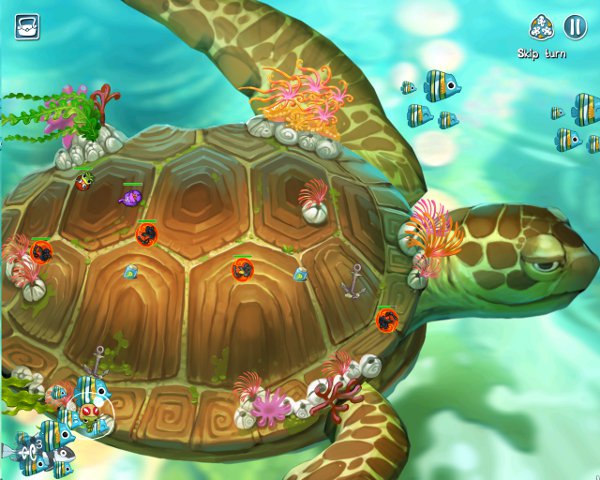 The side-like missions do develop some of the characters a bit more, but for the most part they seem to kind of to pad out the story instead of adding to it.  The main missions are pretty well put together, though some have gameplay issues that will be explained further later.  As it is an RPG though, people shouldn’t be surprised that the story is limited to being advanced only in opening cutscenes of missions, which works out as the there really isn’t room in the levels themselves for it.  The story does take some interesting turns and is very compelling for something that started as an iOS game.

Visuals:
Needless to say computer monitors are generally bigger than iOS devices, so that is where the bigger differences are.  The game has been updated to better fill and fit the varying screen sizes that can go along with PCs.  The visuals of the game look great as big as they are and not pixelated, so it doesn’t ruin Squids’ visual style.  Speaking of the style, is the game ever cute, all the characters are built perfectly to the squidly motif by being very rounded and hardly any sharp edges, making the main characters look very friendly and huggable.

Throughout the story, many of the same scenes see the characters returning, but a solid effort is put into making the still new and different.  Sometimes it is as simple as rearranging the sea urchins and bubble-accelerators, but in later levels the decorum is completely redone in terms of look, with black ooze covering almost every square inch of the floor and walls, plus designs inside those to ensure it’s still visually as stimulating as when it was pre-oozed. 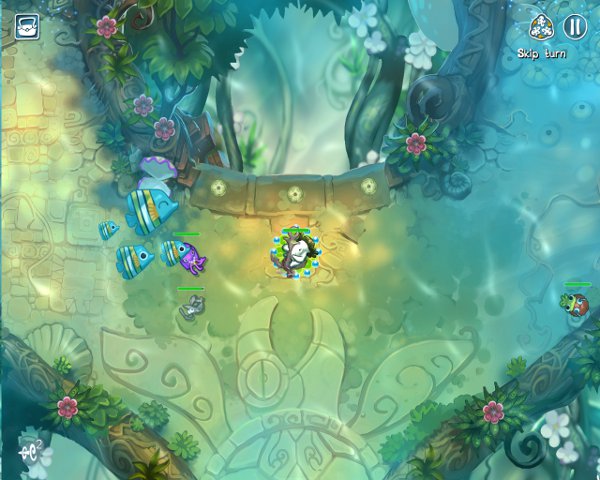 Bonus levels try to have fun with the visual style as the first two take place feature a Halloween fun house style.  The second even using 3D for the red/blue style glasses.  Making a quirky extra fun additional few things to do after the actual story finishes.

Audio:
The audio is as simple as music and sound effects, but the music is definitely something to listen too.  As it should be seeing as the soundtrack was made available to those interested.  It’s hard not to like the music as it does a great job of being light and fun, without feeling out of place in a semi-dark story.  The sound effects are pretty simplistic, but do a good job of fitting in as well.  For the most part though, the music is where it’s at for the audio.

Gameplay:
Squids plays as a turn-based flinger.  The characters are thrown about the screen by the player at varying strengths to determine direction, distance, and damage when they hit something, which could be dealt to an enemy or the squid depending.  How much they can be flung is all in the stamina, denoted as bubbles surrounding the current character. Order is determined by the line-up at the base, so there is no need to account for things like speed.  It goes position 1 though 4 then the enemies, every time.  This allows for a simpler turn based experience as the game certainly feels appropriate for younger audiences. 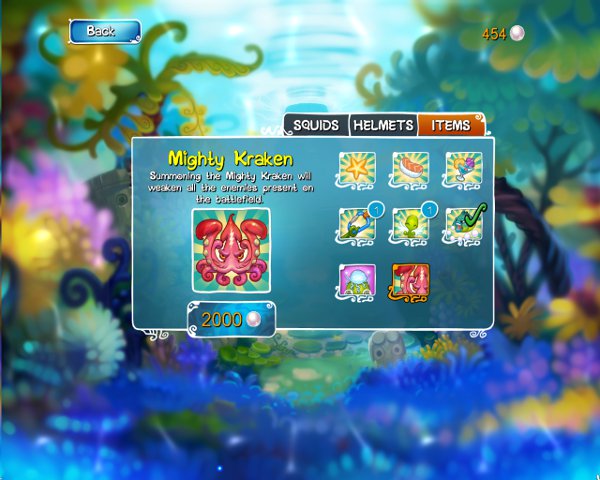 Flinging to move and defeat enemies doesn’t sum the game fully as there are items that modify the gameplay from in-level gained ones that can allow a refill of bubbles, a defensive shell once the squid is finished moving, or ink that lets squids avoid a hit come the enemies turn.  Other items are either purchased for pearls or awarded after a level, which can make the level easier be choosing when a squid gets a bubble refill or halving the enemies’ hit points.  Fairly simple, but also intuitive.

A small issue with gameplay comes with flinging close to the edge of the screen.  Unfortunately, the game doesn’t let players pull past what is available on the current screen, so going for a longer shot requires adjusting the screen accordingly.  It might have been nicer to account of off screen pull-back with the mouse, or to adjust the screen to make room for the mouse as it is pulled back.  Though certainly able to be worked around. 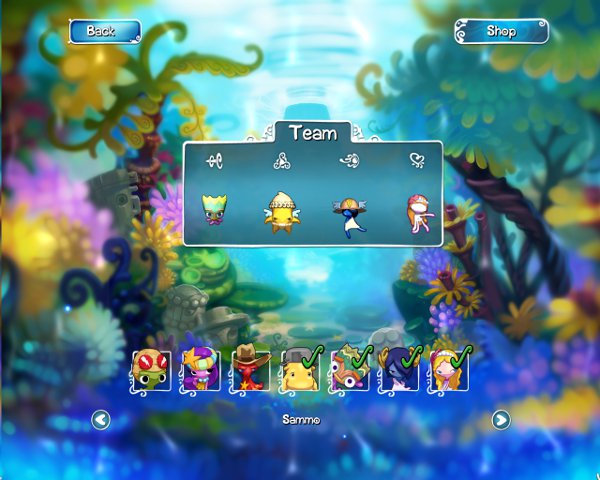 The RPG side comes from the pearls and hats for the characters.  Pearls are the currency, so they allow squids to be leveled up or purchase new hats that can increase the squids’ stats.  Unlike the iOS version players can’t just micro-transaction themselves more, though it isn’t that hard to have enough to level up the character provided players can keep three starring the levels.  Leveling up a scout though can make the game a bit to easy, on any level where the end is available from the start.  The scouts can generally move past enemies quickly enough to avoid a fight and get to the exit of the longer levels in a few turns.

Overall:
Ultimately this is a good game, though the issue of cost comes into play.  The PC version is 7 times more expensive than the iOS version, which makes it a little harder to recommend.  Its hard to know in terms of gameplay having not played the iOS personally, so it might come down to the pearls.  Pearls seem pretty easy to get in the PC version, if harder to get in the iOS, the higher cost may come done to paying more to not have to deal with micro-transactions.  It is a good game with a solid story though, so I give it