So I don’t really get why, and there isn’t any real explanation, but for some reason a whole bunch of your caveman buddies (you see, you’re a caveman) are stuck and you have to save them by swinging. I don’t know, don’t ask, but let’s see if the game itself makes more sense than the plot!

Snap Escape: The Epic Swing (henceforth, Snap! With or without the exclamation mark, depending on how fun I’m feeling) has a very basic gameplay that you might be able to guess from the title alone. So, you basically swing by tilting your device. 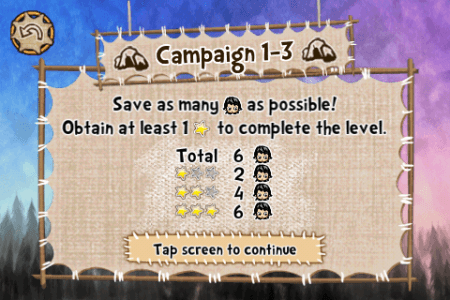 There are two modes, campaign and survival. Each campaign stage has seven levels, which you won’t find terribly challenging, to move forward with each level you have to at least pass with one star (which can mean saving as many as 16 or 17 out of 20 cave people). Survival mode for each stage is unlocked when the stage is finished in campaign mode. You are given four lives in survival, losing one every time you miss a cave person. You can also link this to Facebook, either using it to brag about your score or connecting with other Facebook friends who have the app. 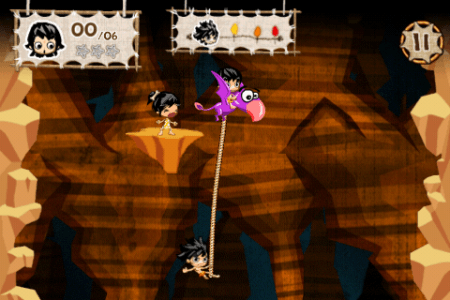 So Snap! is a scrolling screen game, which moves at a decent rate that doesn’t change for the whole game. To save a cave person you swing around on a rope attached to a friendly purple flying dinosaur. Here is where the reason behind the game kind of confuses me and it’s one of those situations where you just do it and don’t question it. There are a bunch of cave people chilling out on little ledges, screaming, crying and stamping their feet at their situation. First you swing past them, knocking them off the ledge which makes them realise they have a parachute and then they start drifting slowly down. But they don’t want to land on the ground, oh no, they want you to come swinging back across and tapping them. Then they teleport out. Cos… Yeah. 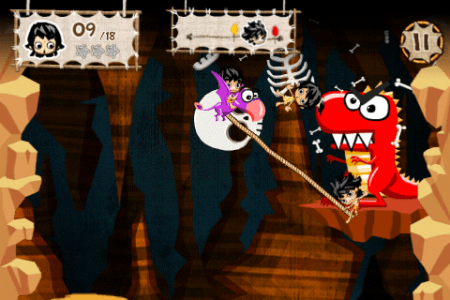 There are three campaign stages, going from caves to treetops to a volcano. There is the promise of more stages, although to be honest these won’t be too great unless more aspects are introduced to the game. As it stands there are ‘spirits’ and dinosaurs. There are three different spirits, the spirit of time, attraction and invincibility. The time spirit slows down time, attraction means that any parachuting cave people will automatically be drawn to you, even from below, and invincibility protects you from the T-Rex. In terms of dinosaurs there is the T-Rex that bites you and makes you lose some of your ‘saved people’, the triceratops has the ability to make all parachuting cave people blow away with his super loud call, brontosaurus makes rocks fall so you can’t see as well, and then there’s this black dinosaur that jumps on you and makes you lose control. 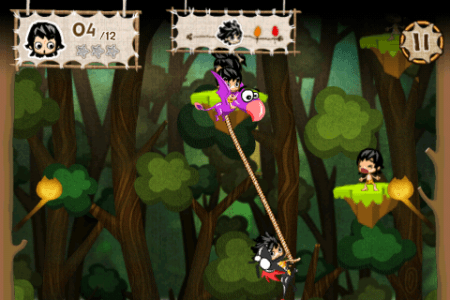 The screen is set up with a meter up the top telling you how far there is left to go on the level, as well as a count down warning that pops up and lets you know when you have two or three people left to go until your first, second or third star.

The thing is, I got through the three stages really quickly. Each stage took me extremely little time and I wasn’t ever really drawn into the game because it never supplied the challenge. It felt like the first three stages of a twenty-stage game that had a very gradual learning curve. Sure, the staggered introduction of dinosaurs was good, but the new dinosaurs didn’t really add to the challenge. 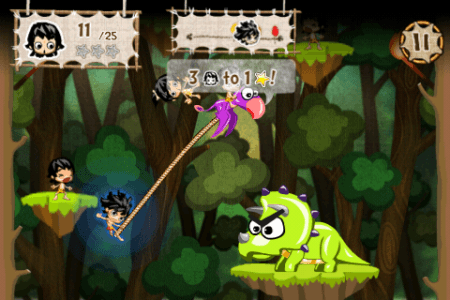 I think you’d have to really make your own challenges in this game, such as if you are an achievement whore and want to get all the stars. I didn’t do that, but I really don’t care about that. Like at all. 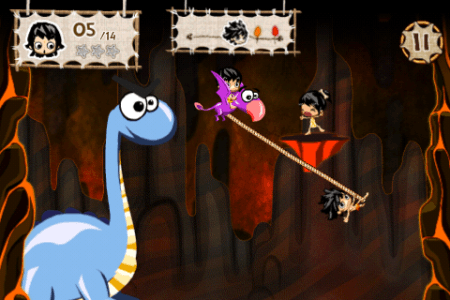 There’s not much to the game visually, there’s your cave people, your set identical background, your dinosaurs, and your rope. It certainly isn’t a bad looking game, it works well for what it is and has a certain style to it, but don’t expect to get blown away or overly impressed with anything

The backing soundtrack is sort of a weird mix of island xylophone with something meant to symbolise cave people. While you’re playing you can barely hear this though, over the sound of your dinosaur’s wing flapping, the effect of saving a cave person, or when you miss one and they give a cry out as they disappear off the bottom of the screen.

Snap Escape: The Epic Swing is perhaps a little bit of a goal rather than an achievement for the game. I mean, sure this guy is swinging around for ages and whatnot, but the game just sits on the same level for the entire time.

I give Snap Escape: The Epic Swing