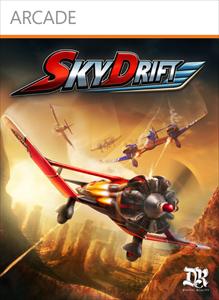 Overview
Upon first glance SkyDrift reminded me of an avian Hydro Thunder. Normally played in arcades, Hydro Thunder incorporates racing of high tech speed boats. Well, these aren’t speed boats. SkyDrift takes racing to the next level by utilizing dual stick controls for maneuverability. Not many racing games promote the use of a barrel roll.

Gameplay
Upon entering the race selection screen, you are able to undergo a tutorial session that discusses the base game mechanics. The left control stick provides left, right, up, and down movement while the right trigger propels the plane forward. Honestly, I hardly take my finger off the gas and rarely choose to use the left trigger to break. “If you ain’t first, you’re last!” (Talladega Nights: The Ballad of Ricky Bobby)

Being able to use the basic controls is important, but maneuvering becomes a little more tricky. The right control stick provides rotation for the plane. Adjusting the wings offers a quicker change in direction and the ability to fit through rock formations. A key aspect to consider when making immediate turns is to slow down – something I fail to do. Utilizing the break can save you from an unnecessary explosion. 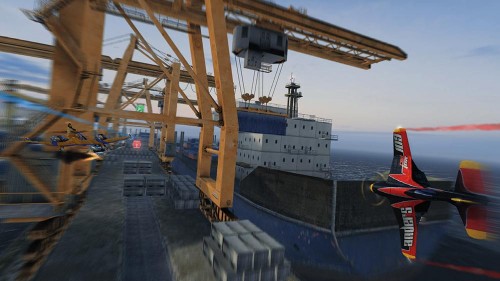 A unique feature in the game is adding boost to your plane’s speed. A boost meter is provided for players in order to gain a possible edge over opponents. Once depleted, the meter can only be refilled by flying close to the ground or by recycling item pick-ups.

SkyDrift becomes a more complex game by adding power items. A player may hold two items at any time and can upgrade them by flying through the same item twice. For example, the missile power-up fires a missile at a locked-on opponent. After upgrading this item, it has the ability to fire out multiple missiles to create an even greater devastation. I was playing a last man standing match and held on to my upgraded missile. Nearing the finish line I unleashed total fury and won within the last five seconds. I was pumped and even was awarded a medal winning in that fashion. 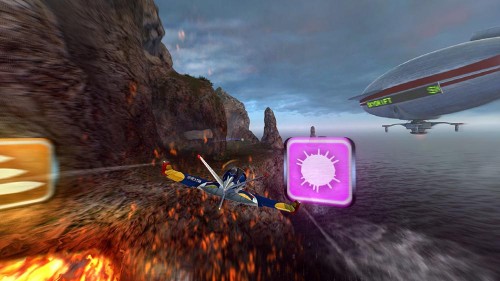 Power-ups can aid you in other ways than destroying your opponents. If a missile has been fired in your direction, you can pop up a shield and negate the damage done to your plane. Or you could be taking direct machine gun fire and in need of repairs. By using the wrench power-up, your fiery plane will be restored to its former glory. Crashing after using this item would only add insult to injury. Alternatively, all power-ups can be recycled into useable boost. Recycle enough items to receive a medal for your boosting efforts.

Each plane is given its own personal attributes. The player can choose their preference on using a combination of speed, acceleration, durability, boost power, and maneuverability. My personal favorite planes have more speed and acceleration than any other attribute. While this may make me faster than most planes, I have a greater chance of flying into walls and not have as precise turning. New planes unlock with completing stages, so you don’t have to stay committed to the same plane. Even new skins can be unlocked but have no altering effects. At least you can customize how you want your plane to look.

With different game modes like power race, speed race, and survivor, plane choice could be a critical decision. In a speed race, the determining factor is navigating through rings that increase your speed. Having increased turning power and speed helps immensely in this mode. Power race is a combination of speed and power items usage. You can rely solely on your speed to carry you through the race, but your plane will be targeted several times by unyielding opponents. Any plane is capable of winning at any mode, but you must keep in mind how to use them accordingly. Survivor mode is perhaps the most difficult of the three. Players are continually eliminated by being last in the line-up after consecutive countdowns. Basically, the last man standing takes home the trophy. Utilizing power-ups is a necessity in order to be successful in survivor mode otherwise prepare for elimination. Attain a rank of 3rd or better in campaign to unlock new stages and planes. 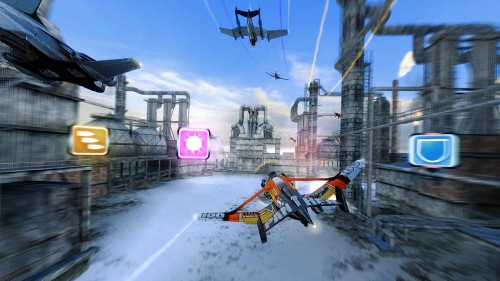 While the campaign is able to hold its own, the multiplayer has potential. Finding players online may be sporadic and time consuming. I tend to be impatient when it comes to any waiting periods, and the multiplayer did not help. Since you can play with 2-8 players online, you can be matched up with a single opponent. I felt that a head-to-head match on survivor mode is a ridiculous notion, and CPU opponents should be added to increase playability. Otherwise after the first round of elimination the match is over – very frustrating.

Graphics/Audio
The environments are highly detailed. Digital Reality did well to making every art asset visually appealing and offer enjoyable sceneries to play through. Whether you are flying through an industrial park or a shipwreck, your eyes are continually monitoring the screen for any obstacle.

Using your boost will cause your plane to go faster and additionally cause blurriness to your outer peripherals. This helps create a believable feeling of achieving higher speeds while showing a bit of realism. If you are attaining such speeds, won’t you be more focused on what is in front of you anyway?

The music score is nothing special to discuss nor is it degrading. The background music is simply masked over the action packed sound effects of each plane. And you shouldn’t expect to go on a joyride in this game. Plan on being challenged at every crevice and avoiding near death collisions. Even though the explosions are cool. 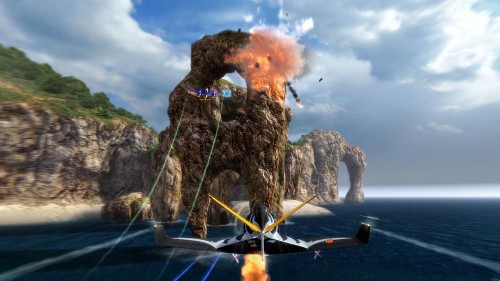 Overall
While mimicking an arcade classic, SkyDrift offers players more by incorporating an arsenal of weapons to literally decimate each other. Mastering dual stick controls may prove to be difficult but creates a challenge that most gamers won’t pass up.

The campaign is probably the game’s strongest asset. Requiring ranked wins to unlock new stages, SkyDrift provides a challenging experience for any gamer. While the multiplayer relies on active online members, I would bet to see more traffic in the near future. SkyDrift is a neat racing game that everyone should get their hands on.