Hybrids are usually risky when it comes to video games, but sometimes when pulled off right they can be revolutionary. SHMUSICUP: Shoot Music Up claims to be a hybrid of the shoot em up and rhythm/music genres developed by Tzai Entertainment, a recent start up developer based in Singapore. This combination offers the potential for true greatness, so let’s see how SHMUSICUP holds up. Keep in mind, the game is currently in its beta form, so things may change between now and its release.

SHMUSICUP belongs to the subset of shooters referred to as bullet hell due to the staggering amount of shit on screen for you to dodge. The game is definitely not lacking in this department. While it may not have as many projectiles as the legendary Mushihime-sama Futari (which has been called subjectively by some the “hardest game ever”), SHMUSICUP is still pretty manic as far as shmups go.

The way that Tzai integrated music into their game is by having the player choose a song in the form of an MP3 file as the background music for each level and then generating a bullet pattern based on the rhythm and intensity of that song. There are a few free songs available to choose from, but most players will probably enjoy being able to play along with some of their favorite songs from their hard drives. Because of this feature, players can affect how fast and intense they want their shooting experience to be. It should also be noted that players can use *any* MP3 file, which can make for some interesting experiences (more on that at the end).

In my time with the game (I played all of the pre-loaded songs plus a few dozen of my own in varying genres) I didn’t really notice any problems with the game recognizing my songs nor did I find any songs that weren’t fun to play with. Occasionally the beginning of a song would have almost no bullets to avoid, but the difficulty quickly increased after 30 seconds or so. The last few seconds of most songs are equally devoid of bullets regardless of how the song ends musically, only to be followed by a final splurge of bullets right before the boss dies. 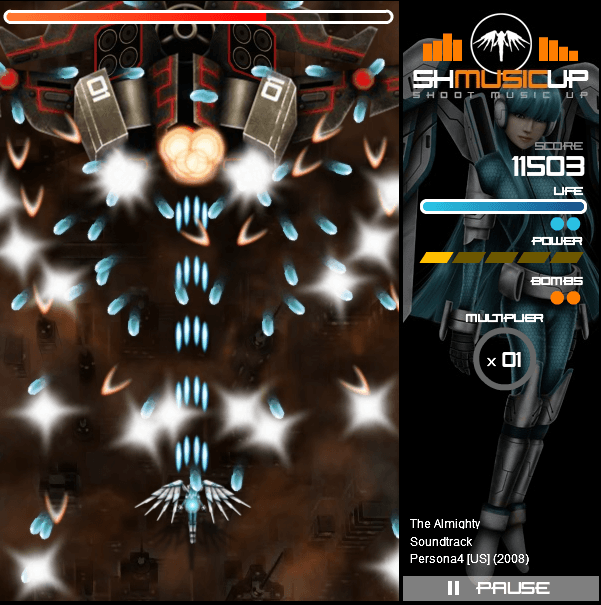 Another interesting mechanic of SHMUSICUP is that there are no small enemies. Each of the six stages is a boss fight, and similar to Shadow of the Colossus, defeating these giant creatures is your only specific objective (well, that and survive). However, in Shadow of the Colossus this worked well because each boss fight was significantly different and required different strategies to defeat, whereas in SHMUSICUP it sort of just feels like an aesthetic difference. Later bosses are harder than earlier ones to be sure, but they don’t feel significantly different and I think that the inclusion of enemies leading up to the boss would have added some variety.

There are several different modes and difficulties in order to add said variety however. The default setting is called Prox mode, and offers higher score multipliers to players who are brave enough to stay near the top of the screen, a strategy many wouldn’t be encouraged to use in most shmups. In the unlockable Graze and Aim modes, players are given multipliers for allowing bullets to pass near them and for continuously getting hits on the boss, respectively. As you can imagine, each of these modes adds a different type of strategy to getting a high score.

Along with the modes are the different speeds at which you can play the game. Normal is the speed at which you will need to play at first, but you can also unlock Slow-Mo and Turbo speeds. Slow-mo obviously slows bullets down for you; however it also significantly increases the number of projectiles on screen at a time. Turbo mode works in just the opposite way, with shots rocketing towards you, requiring you to have your reflexes at max capacity. Each of these speeds can be combined with a mode to offer interesting and unique play and scoring styles.

One of the aspects of SHMUSICUP which I found a bit strange, albeit logical, was the amount of HP each boss has. Each stage will end when the boss dies, and this will always be at the same time that the music ends. This means that from the beginning of the level the boss is fated to die, assuming you are able to survive his onslaught of bullets. Even if you don’t fire a shot, the boss’s health will slowly drain with each note of the song until his inevitable demise. The only responsibility on your shoulders is to stay alive and to score as many points as possible, which you do by shooting the boss. While this doesn’t make the game worse, it just seems strange that you can finish a level with a score of zero, and it may affect the motivation of some players to continue with the game. 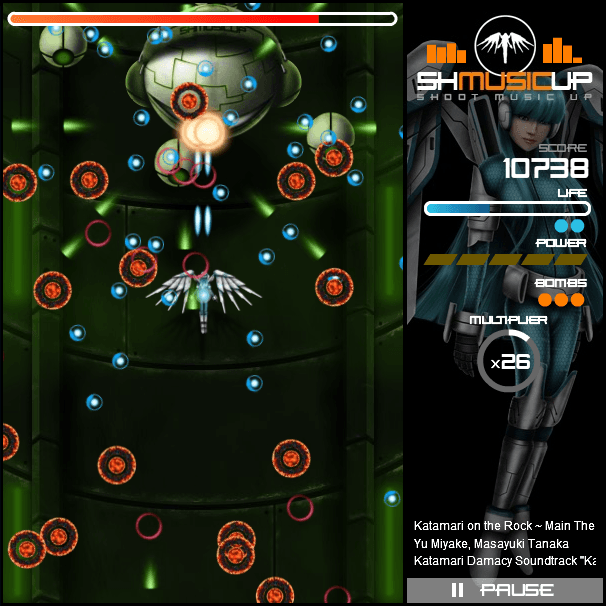 There are also two unlockable difficulty levels, one which allows you to continue infinitely and one which gives you only one life. The former obviously offers players a chance to relax and enjoy the show while listening to their MP3s, and the latter offers a tougher challenge to veteran players. To add even more to the replayability of SHMUSICUP, the devs at Tzai have also included dozens of achievements (just shy of 40 at my count) for players to earn. Some of these are as simple as completing a stage or choosing a certain preloaded song, while others challenge players with high scores or songs of a certain length.

While I enjoyed checking off the list one by one, I found that most of these could be completed pretty quickly, especially if you’re willing to bend the rules a bit. I also ran into a glitch with two of the achievements which tasked you with completing a certain number of songs. Each time I would close the game and come back later, my song count was reset, meaning I would need to play 20 or 50 songs in one sitting in order to complete it. Hopefully this bug will be fixed by the full release of the game.

Although the videos I’ve uploaded to YouTube (see below) don’t do it any justice due to my low-tech recording techniques, SHMUSICUP is a very nice looking game. It doesn’t have exactly what I would call high end graphics but it’s definitely pleasing to the eye. All 6 of the bosses look awesome and have some really cool design behind them. The playable character (in all 3 modes) looks equally cool, and reminds me more than a little bit of KOS-MOS from the Xenosaga series. There is also a huge variety of projectiles for you to doge in the game. Not only bullets of different colors, but also different shapes, sizes, and movement patterns that you’ll need to learn.

While SHMUSICUP won’t require a decked out computer to run, you can tell that there was a lot of care put into its creation. The only complaint I have about the visual presentation of SHMUSICUP would be that the backgrounds to each stage are a bit boring. I think that this comes from a functional requirement, as it could be confusing to follow hundreds of tiny bullets with your eyes if there is something too distracting behind them, but I felt myself missing a more dynamic background.

Since MUSIC is right in the middle of the title, I would consider sound a pretty important element to SHMUSICUP. Obviously, the quality of the sound is largely dependent on the player, and this is a huge benefit for the game. There have been plenty of games I have played (and I’m sure I’m not alone) that have had soundtracks or perhaps individual songs that just get on your nerves eventually. This could be either because they’re not your taste of music, they’re short, repetitive loops (I’m looking at you, Persona 4!), or they’re just not that good. The ability to use whatever songs you want in SHMUSICUP basically eliminates this problem altogether. If you don’t like the music you have only yourself to blame. 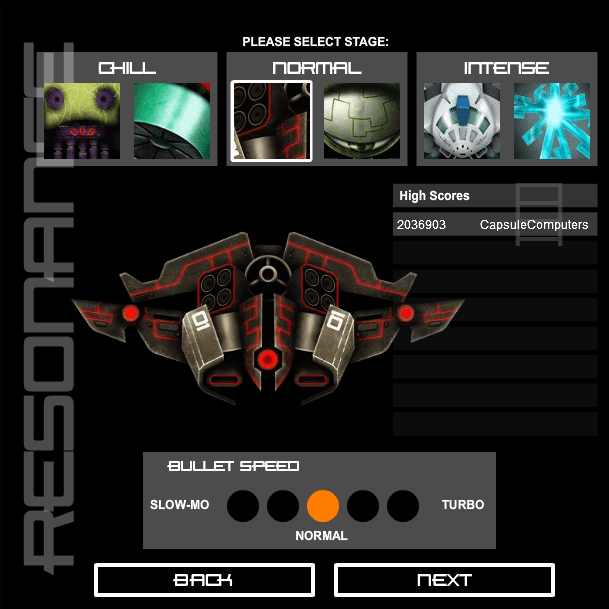 There are a few songs that are included with the game (six in the beta version) and while I didn’t choose any of them that many times, I did make sure to try out each of them. One thing I can say is that the style and genre of the songs definitely fits well with the mood of the game. Each song had a distinct electronica-techno sound to it (I’m not great at distinguishing between electronica, techno, trance, house, etc so forgive me if I use the wrong terms) and the tempo and rhythms do a good job of getting you pumped for the action. I particularly liked Magdalenian by Wahnsinn which had a very metal flavor to it. While this sort of electronic music definitely isn’t anywhere in the realm of my very ska tastes, I didn’t find any of the songs offensive to my senses and I thought they were well-composed.

In terms of sound effects, the game is actually a little on the disappointing side. While none of the sound effects are bad, they also just aren’t very satisfying. The sounds of your shots hitting the boss will be mostly drowned out by the music and sound like your typical shmup sounds. Getting hit by a projectile makes a very distinct but oddly inappropriate soft thud. Even the sound of the boss exploding, which should be a cathartic experience after a difficult level, is lackluster and subdued. While this isn’t the most important aspect of the game, it is disappointing to see a shmup (and a musical shmup no less) with mediocre sound effects.

SHMUSICUP is a good game. I really don’t have much to complain about even in its beta form, which is extremely promising for a game by an unknown indie developer. SHMUSICUP is not as much of a hybrid as its name would lead you to believe, but that doesn’t mean it isn’t fun. Fans of shmups should enjoy it for its ridiculous bullet patterns and huge enemies, while most players will probably appreciate the use of a custom soundtrack. I found that it was the most enjoyable when I was experimenting with different variations of modes, speeds, and songs to see all the different experiences Tzai had to offer me. Add the online leaderboards and intensely score-based gameplay and you have a combination that will keep competitive players coming back again and again. If you’d like to try out SHMUSICUP now, head on over to their website and take it for a spin.

To get a look at one of the later levels not available in the demo, check out the video below. It shows me failing miserably at the Resonance stage on Turbo speed. For more videos of SHMUSICUP, head to my channel here.

As a fun little addendum, here are some of the more quirky things you can try while playing SHMUSICUP: