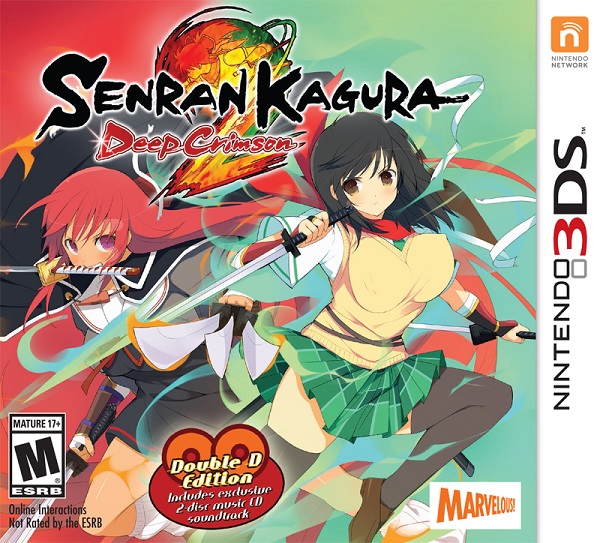 Overview
The Senran Kagura series was seen as such a risk to bring over to the West that when the original game managed to get released, it was given the digital only treatment. Thankfully, likely due to fan support, the series has blossomed in the West to the point that the subsequent PS Vita game was given a physical release and even the strange but enjoyable cooking rhythm game was localized. Now here we are with the continuation of the series’ core storyline in Senran Kagura 2: Deep Crimson for the 3DS.

Story
The beginning of Senran Kagura 2: Deep Crimson starts by retreading the end-game material from Senran Kagura Burst, likely so that new players can try to jump into this game without worrying too much about losing the plot but if you haven’t managed to play it yet then you’re definitely missing out. Anyways, the shinobi of Hanzo academy are infiltrating the evil Hebijo Academy in order to retrieve the school’s scroll that was previously stolen by the Hebijo shinobi. 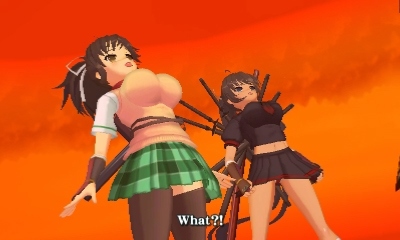 This leads to a number of bouts between the main girls in the series as Asuka and the rest of the Hanzo shinobi end up putting a stop to the leader of Hebijo, Dogen’s, plans to resurrect an ancient monster. After succeeding, the Hanzo students returned home while Homura, Yomi, Hikage, Mirai, and Haruka choose to become rogue ninjas and splinter off into a new group known as the Homura Crimson Squad and choose to live off the grid away from their old school and continue to train while taking small jobs where they can.

Despite Asuka and Hanzo’s win over Dogen, yoma continue to run rampant and their rise throughout the story leads to the former enemies teaming up in order to face off against these creatures and any other forces who stand with them. This leads to a couple of new interesting characters being introduced to the storyline in the form of the young Kagura and her protector Naraku. 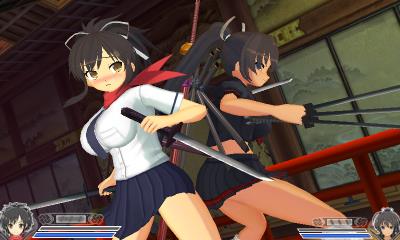 The meat of the storyline may be fairly standard but it is the interactions between the characters remains one of the best highlights of the game. With plenty of funny moments the cast really shines in this installment in the series as fans have already spent plenty of time getting to know them and their personalities as well as how they act with one another. That being said there, elements of the girls’ backgrounds go fairly unexplored in this installment release so newcomers may be lost in regards to certain elements of a character’s backstory if they never played Burst.

The core focus is mostly spent on the enjoyable interactions amongst the core girls while also introducing and exploring elements of the two mysterious aforementioned girls who are introduced in this game. It is worth noting that there are some fairly drawn out segments in the storyline that end up dragging it down a bit which is unfortunate since the prior game seemed to avoid this issue almost entirely.

Gameplay
Players have a number of ways they can play through Senran Kagura 2: Deep Crimson though most of the time you’ll be working on advancing the story in a manner that you would expect, with the story advancing as the player completes the story missions that require players to play as either a specific character or pair of characters. 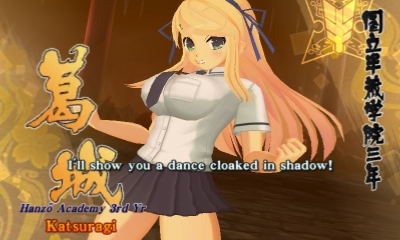 These missions can then be completed again however many times you wish with whatever character you choose to grind experience points. Other game modes include specialized missions that require the player to complete a stage given a certain condition (such as winning within a certain time limit or being unable to damage enemies with airborne attacks) with the reward being a shinobi stone that can subsequently be equipped to provide a certain buff to the chosen character. Finally there is the Yoma’s Nest mode that allows players to choose a character, or once again a pair of characters, to enter into a gauntlet of battles as they progress down a fourteen floor pyramid with fights getting increasingly difficult as you progress with no restoration in-between battles, making it a great way to earn XP, test your skills with certain characters, and of course unlock some cosmetic weaponry as a bonus. 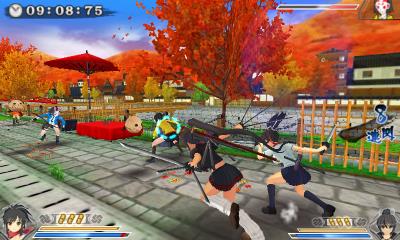 Combat in Senran Kagura 2: Deep Crimson has been refined with some elements from Burst and Shinovi Versus combined to create a fresh type of system. Players will be fighting on a 2.5D plane in this side-scrolling brawler using various combo attacks to take down opponents that range from other generic shinobi, to wooden dolls, to demons, and of course the other playable girls. Attacks are handled in a similar style to past games with X triggering most combos and mixtures of Y allowing for heavier attacks as well as adjusting the light combo.

You see, in this version most characters now can alter their combo attacks with the Y button either imbuing their weapon with a new ability or swap it entirely, expanding the capabilities of each girls’ unique fighting style even further. For example, Katsuragi can hover through the air using the power of wind and deliver faster blows, Hikage becomes faster with her deadly sword-whip, and Mirai swaps between her umbrella, a machinegun, and a grenade launcher making her the most versatile character on the roster. 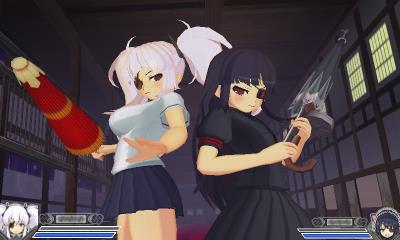 Each of the girls’ combo attacks are listed on the bottom screen making it easy to know what the character is capable of at any moment. Of course players will also be able to use the girls’ secret ninja arts after a Shinobi Transformation. Some battles begin with a character already in this form but after delivering or receiving certain amounts of damage a scroll will be earned allowing for a Shinobi Transformation, or at least three scrolls to trigger Frantic Mode. Shinobi Transformed characters will restore their health and clothing while allowing three different types of ninja arts (which remain just as entertaining as ever) to be performed to various levels of strength while the Frantic Mode strips the character bare for the benefit of increasing all the characters’ stats at the cost of a constantly draining health meter. 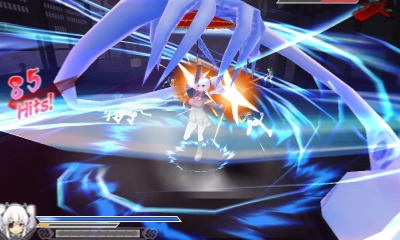 Now I’ve mentioned pairs a few times so far and that is because one of the biggest changes to combat in Senran Kagura 2: Deep Crimson happens to be the fact that many missions and levels in Yoma’s Nest can be completed with two shinobi at one time. Players will now be able to select their primary character as well as a partner to bring into combat who will fight alongside you. This party member can be swapped to at the tap of a button and can even execute powerful team attacks that vary depending on the characters you have teamed up with one another. This adds an extra layer of depth to the combat system as well as the possibility to play with a friend and complete missions with them as the title supports both local and online co-op play. 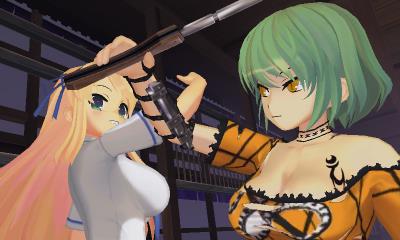 It is worth noting that thanks to the game’s transition into more of a 2.5D side-scrolling format that the camera becomes a rather annoying issue in this game. While it is possible to lock onto an opponent, it merely provides an arrow in the direction of that foe and their health bar. Controlling the camera is not possible for the most part and this often leads to attacks and skills missing an opponent far too often than one would like. This also becomes an issue thanks to the rather large difficulty spikes that come in the form of bosses in this game. While it is possible now to select between Easy, Normal, and Hard mission difficulties, the bosses that appear at the end of most levels are often capable of shrugging off attacks and dealing their own uninterruptable combo attacks that will likely see you facing a mission failed screen far more often than in Burst.

The fan-service level still remains a very prominent feature in Senran Kagura 2: Deep Crimson. As mentioned earlier, players can enter the Frantic Mode to strip down to their underwear immediately but whenever you take too much damage your girls’ clothing will be ripped apart, usually with the top and skirt/pants ripping separately over the course of a fight. The same can be said about your enemies as special skills will strip enemy shinobi of their outfits while cannon fodder enemies can be stripped with basic attacks. 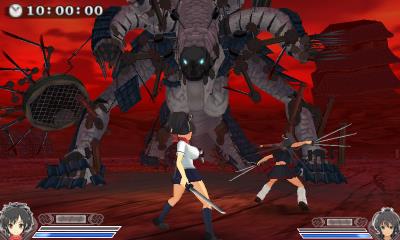 Character customization also returns in a big way as players still have free reign over the accessories and outfits a girl wears into battle with plenty of customization options available. This means that the changing room is back, including the ability to poke them in various places to hear their comments and turn the camera around their bodies and now the characters can be told to take specific poses if you wish it and, if you still have the AR cards for the 3DS, can be displayed in the world using system’s camera. This means the game is certainly for those who know what they will be getting into in that regard.

Visuals & Audio
While the Nintendo 3DS may not have enough capabilities to deliver the same polished character models found in Shinovi Versus, they have undergone a significant improvement over Burst. The character models have been given an impressive increase in quality and level of detail which is essential considering the fan-service element and the various options available in the dressing room and costume customization. There is even a humorous touch regarding Mirai’s shinobi transformation as she attempts to perform the same move as the rest of the busty characters only to hit herself in the chin. 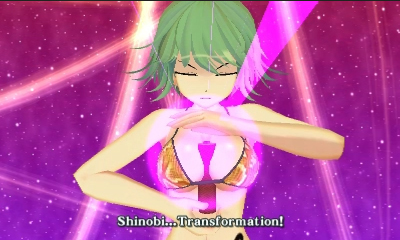 The environments have also been improved with some nice details here and there to keep things feeling fresh with some actual depth in most areas. It is worth noting that the voice track again features only the original Japanese voice work but at this point fans should be more than familiar with how each character sounds and for newcomers these characters are all performed well and fit their nature. The soundtrack features a number of enjoyable tracks that can be listened to in the game after you complete the level they play in.

Overall
While not as in-depth as the original game’s storyline, Senran Kagura 2: Deep Crimson still delivers an enjoyable story with plenty of humorous moments accompanied by a far more refined combat system with plenty of new elements to take advantage of. With the clothes ripping fan-service at an all-time high, difficulty spikes and camera issues may be a prominent issue with the game but that only puts a small damper on the latest entry in the series that continues to prove itself as a fun brawler.