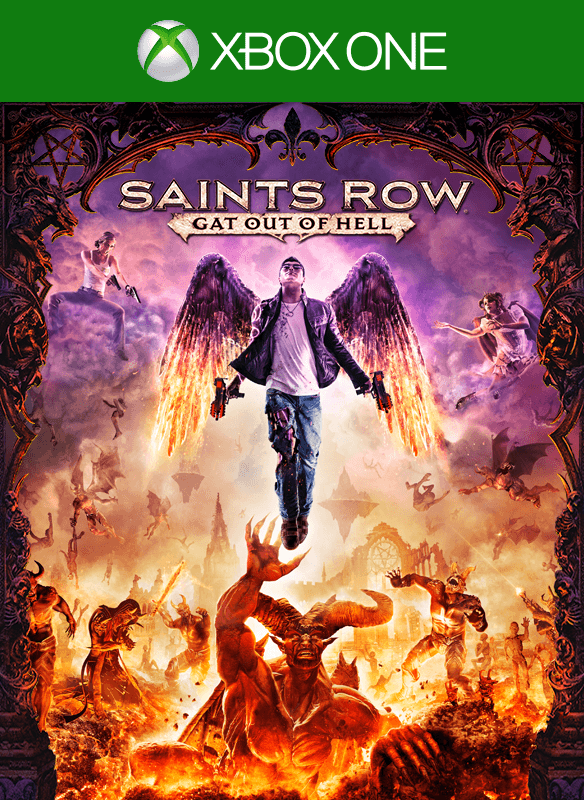 Overview
Volition and Deep Silver have gone to space and taken on aliens, now where could they go now you ask? To hell of course. Or at least a few of them will as Saints Row: Gat out of Hell pits players against the forces of Hell in order to save a friend. Is the unique experience of visiting hell in one of the most ridiculous game series worth picking up? Let’s find out.

Story
Now it is worth noting that Gat out of Hell does contain spoilers if you haven’t actually completed the main storyline of Saints Row IV, though it is obviously predictable what the outcome will be. That being said, the story picks up after the events of IV with the surviving members of the gang aboard the Zin Ship. The crew has organized a birthday party for Kinzie Kensington and Mat Miller has decided that everyone should play a party game involving a Ouija board. 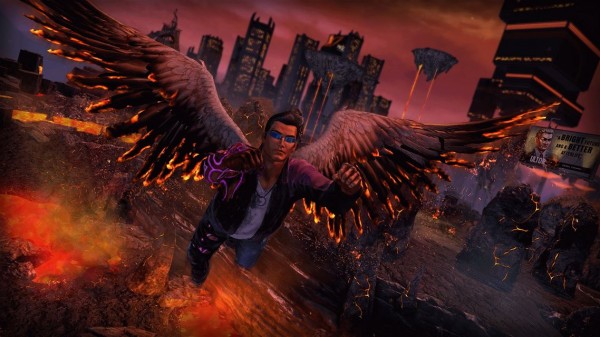 Unfortunately, this Ouija board happened to be owned by Aleister Crowley and it opens a portal to hell sucking “The Boss” into it. In an effort to save their leader, Kinzie and Jonny Gat enter their own portal into Hell where the first person they meet happens to be an old enemy, Dane Vogel, the head of the Ultor Corporation. Dane informs the pair that he is more than willing to help out The Boss as Satan is planning to marry his daughter Jezebel off to him/her but they can try and get his attention by wreaking havoc throughout Hell.

In order to do this, Dane gives Johnny Gat Lucifer’s Broken Halo, giving whoever possesses the halo arcane powers and the ability to use fallen angel wings to fly around. Unfortunately the whole point of wreaking havoc is about the only thing to do in Hell as the actual story here is paper thin. The more players complete various missions or challenges the more a bar will fill up on the pause menu before triggering a cutscene. 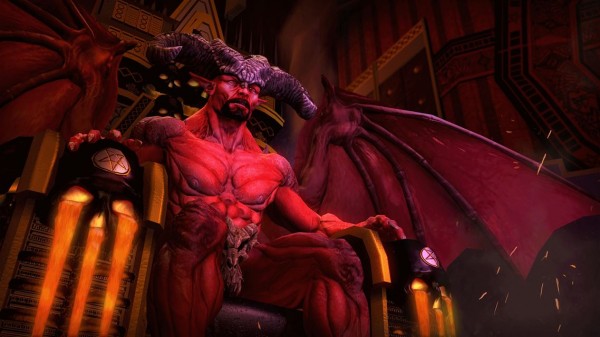 This means at most, there can be three or four actual story events in the entire Gat out of Hell storyline which means it is entirely possible to complete the story in three or four hours as gaining Satan’s attention is extremely easy to do. The lack of any actual story missions or a solid enough plot is disappointing as the familiar faces we run into in Hell as well Jezebel and Satan could really have created a more compelling tale but instead it’s mostly a setting for destruction.

Gameplay
On the surface, it seems like what Gat out of Hell is has been taken mostly from Saints Row IV, but look beneath that surface and you find a lot of things have been changed this time around. Sure the game uses the same standard engine as before but players are now in a completely different game world that may bear some similarities to Steelport but little else.

Players are also gifted a set of powers right from the start and must power up these abilities by gathering souls which are this game’s variation of the data clusters. Some of these powers such as blast, power stomp and speed running through the streets or up walls are the same but all of them have been changed up with unique elements and some are completely new. For example the blast power can now turn enemies into stone or send a damned soul to hold them in while the new powers involve summoning minions to fight and die for you as well as actual flight. 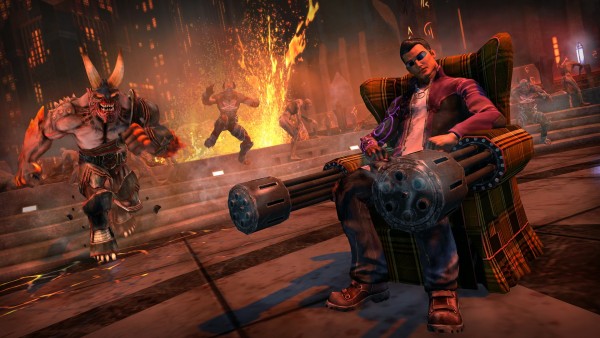 While the player could previously glide through the air in Saints Row IV, Gat out of Hell gives both Gat and Kinzie wings that allow them to fly through the air, using flaps and various aerial maneuvers to get around. Perhaps the best aspect of Gat out of Hell is actually flying as players will quickly be able to level up this ability to the point that they can stay in the air for an extremely long time and use dive bombing techniques to fly incredibly fast, allowing players to gather souls for power ups or travel across the map at speeds much faster than the core game.

Players are also given a set of new guns to play with in Hell. There are standard variations to use as well as demonic equivalents but where the real fun comes into play is when you can track down the weapons based off of the Seven Deadly Sins. These weapons are a blast to use and are absolutely ridiculous looking at times, such as the Sloth sin weapon which is literally a floating recliner with Gatling guns in the arm-rests and missiles that shoot out of the foot-rest. It is worth noting that some of these weapons are easy to obtain, such as Greed and Sloth, but others require entire side-missions to unlock meaning that there will be some hunting required to obtain them. 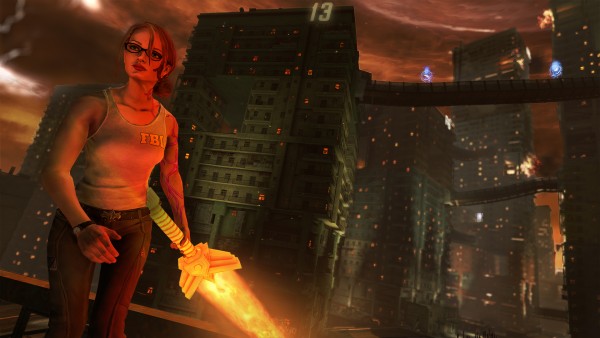 As mentioned before, there are no real missions here and players are instead told to complete various side activities instead. Some of these side-activities have been changed to reflect Hell and your new super powers, such as “Salvation” which involves the player flying through the air attempting to save souls falling from the sky, but many of them are simply re-skinned variations from the past game. Even the allies that you can attempt to recruit only offer missions that simply involve these basic activities so don’t expect anything solid even here or any development with some familiar names from history.

There are various collectibles to find such as lost journals for each of the allies as well as Satan’s “Damned Souls Guide” to provide a bit of extra context and backstory as well as unique commentary points for Kinzie and Gat but other than that you won’t find much extra here. It is entirely possible to face off against Satan without even trying to meet up with potential allies as the entire thing is tied to how much chaos and activities you’ve completed more than anything else. This means that the story, or at least what is there, is incredibly short but if you are looking for plenty to do in a unique new world with a new set of toys then Gat out of Hell has it in spades.

Visuals
Being set in Hell, Gat out of Hell features an entirely new aesthetic consisting of lava and brimstone. The new city that players will be exploring has been completely re-done with new high-rise buildings, slums, shinging billboards advertising hells amenities, succubus’, and more which creates a world you will want to stop and look and take a look at. As you explore the fiery world at high-speed you’ll notice that the populace is now replaced with husks suffering in hell and the police are now demons that drive around in monster trucks or creatures capable of summoning shields to protect themselves. 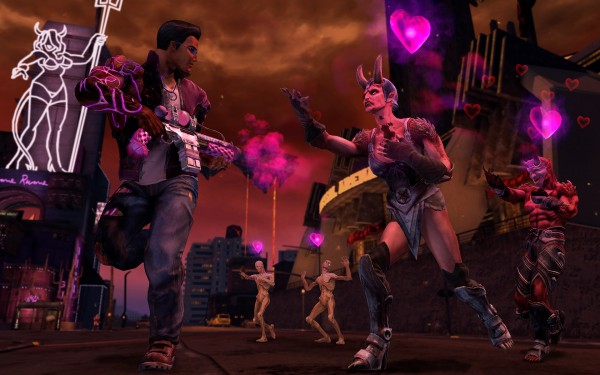 It is worth noting that the whole customization option has been removed in Gat out of Hell. Players cannot change the outfits or anything else of Gat or Kinzie, though they can swap between the two characters by returning to Ultor HQ, and the appearances of the weapons cannot be altered at all. This is a minor complaint as Gat out of Hell’s aesthetic and special sin weaponry’s unique affects really make the most out of the Hell theme.

Audio
One thing that players will notice once they find themselves in Hell is that there is no music there outside of what the characters happen to sing themselves. This means that as you fly over lava pits or through various hellscapes you’ll be doing it simply listening to the atmospheric noise. The lack of music is disappointing, especially since there are so many songs that come to mind that would work perfectly well in this situation. 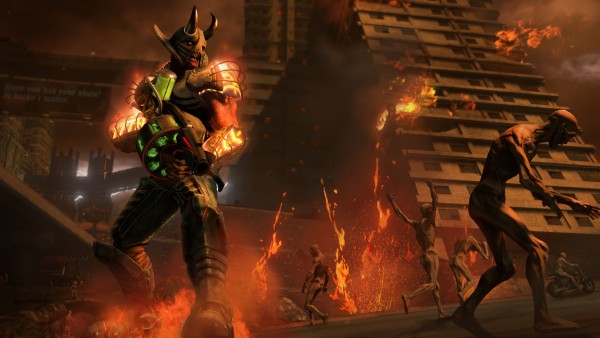 Other than that the voice work is about what you would come to expect in Saints Row, with all of the characters retaining their previous voice actors and the new cast being voiced well enough and provided with good enough material to keep players laughing.

Overall
While the lack of a consistent storyline is disappointing and rather short, Saints Row: Gat out of Hell feels like the best place that the series could have gone at this point. Offering a brand new area designed perfectly, a set of mostly new powers and flight which is an absolute blast to use, and a new insane arsenal to unleash on the demons that stand between you and Satan, Gat out of Hell is a strong release and is probably best seen as a true conclusion to what we found in Saints Row IV and one hell of an experience despite its flaws.