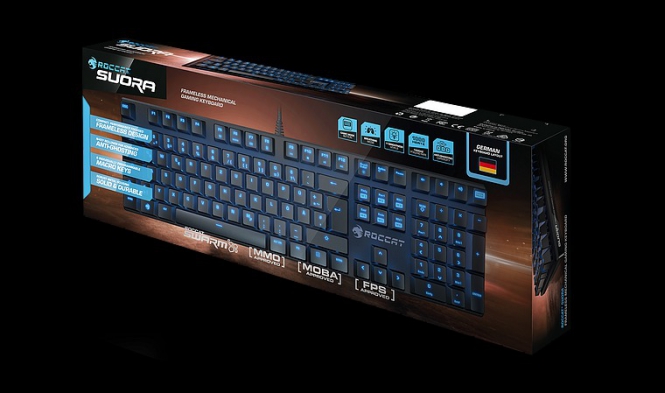 The Roccat Suora Frameless Mechanical Keyboard marks a new direction for Roccat. This is the first serious break from Roccat’s standard keyboard design. The Roccat Suora is a completely frameless mechanical keyboard designed to provide the full 104 key layout in the most compact form possible. The keyboard features Roccat blue LEDs and brown keyswitches from TTC.

The Roccat Suora’s packaging is a rather no frills affair. The box is designed to survive a few drop kicks by inattentive staff at your local courier service. Inside the box is a small quick start guide and the keyboard itself packed in a plastic bag. 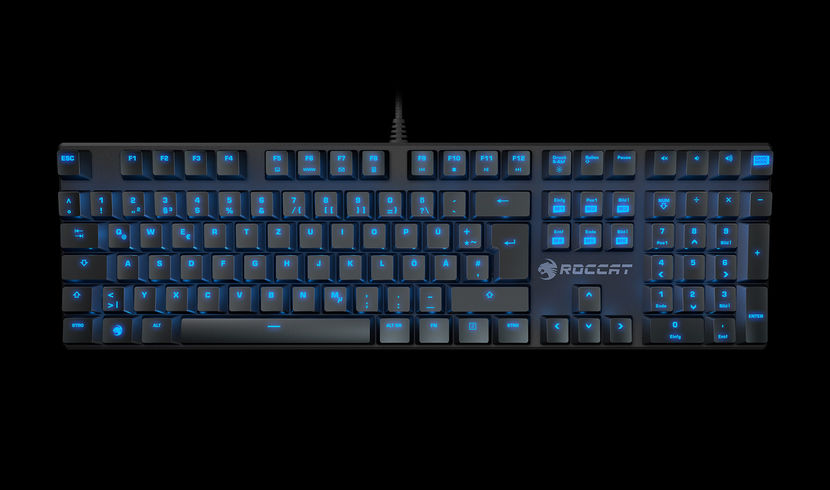 The keyboard is built with a plastic case and a metal top plate. The plate only extends a centimeter beyond the end of the keycaps, making the keyboard incredibly compact. A very tastefully grey Roccat logo is placed just above the arrow keys. The key caps are coated quite well. All but one key’s coating are perfect on my keyboard. The blue LEDs are traditional-type LEDs mounted to the body of the key switches. The USB cable is lengthy enough for most set ups and uses a-tay in place.

The keyboard is incredibly sleek and sophisticated looking. The LEDs for Caps Lock, Num Lock, and Scroll Lock turn off and on based on their status. The font and icons on the keycaps are restrained and clear. If it wasn’t for the Game Mode key and the Roccat branding on the Windows key and the top plate, it would be easy to forget that the keyboard is designed for gaming. I’m not a huge fan of the shape of the Game Mode and macro icons, I think a plain rectangle would have looked better than the slightly crooked shape they chose. 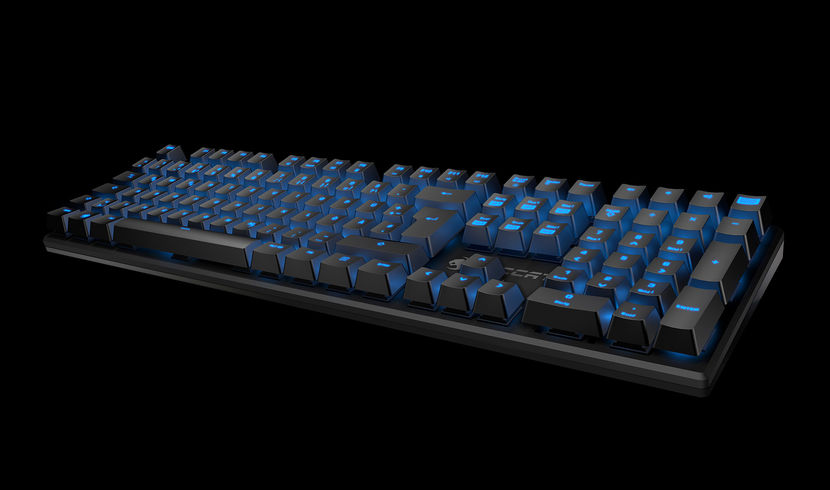 I have a love/hate relationship with the frameless design. I love how compact the Roccat Suora is. Unlike most gaming keyboards I’ve used in the past, I’ve rediscovered quite a bit of desk space since I started using the Suora. On the other hand, I tend to keep several cables on my desk for Xbox controllers, smartphone charging, headphone cables, and so forth. I found the frameless design has a nasty habit of allowing loose cables to slip between the top plate and the keycap which prevents key from being depressed.

It is no secret that Cherry Corporation has been having problems with supplying enough Cherry MX switches to satisfy a very hungry mechanical keyboard market. I would not be surprised if these supply issues played a major role in Roccat releasing its first non-Cherry mechanical keyboard. Roccat has opted to use TTC brown switches for the Suora. TTC has long manufactured switches for mice and has recently started producing Cherry clones. The TTC switches have the same specs as Cherry MX Brown, with 45 grams of force to actuate and tactile feedback. Based on the specs TTC offers, these switches are supposed built with tighter actuation force tolerances and higher lifespans than what Cherry offers. In practice, I find the TTC brown switches feel more crisp than the Cherry MX Browns. This also results in a higher pitches click compared to the mushier thud of the Cherry switch. The TTC brown switches remind me of a slightly quieter version of the incredibly loud Cherry MX Blue switch. I find the crisper feel of the TTC browns to be a more pleasant typing experience than the Cherry equivalent, but I also happen to be a fan of the extremely loud Cherry MX Blue switch. 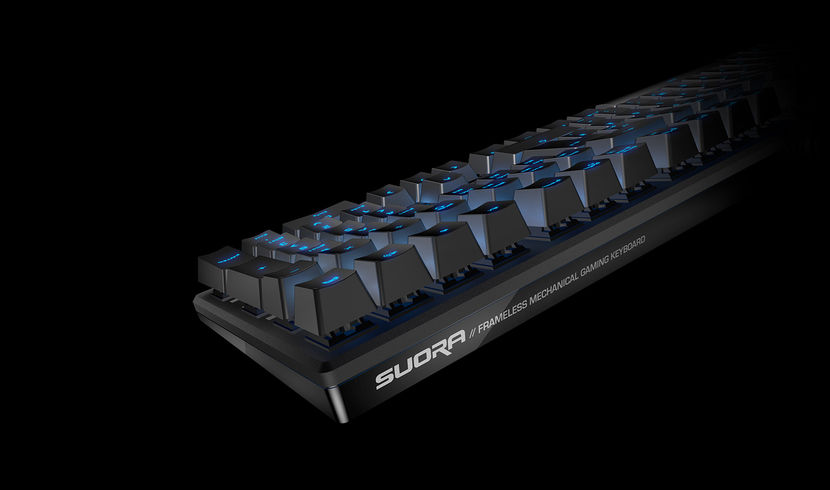 Since the Roccat Suora is a frameless keyboard, Roccat has dispensed with some of the standard features of Roccat keyboards, like the left row of macro keys and the three macro keys under the space bar. In its place, Roccat has added a set of four keys on the top right corner of the keyboard for volume controls and Game Mode toggle. When Game Mode is activated, the Windows key is disabled and the Insert/Delete cluster is replaced with six macros. Frankly, I find the position of the macro keys to be utterly useless. For almost all games, my keyboard hand is always firmly planted on the left side of the keyboard. It’s a total waste of time to have to look down and move one of my hands off their position to hit one of the macro keys.

The Roccat Suora uses the new Swarm software. I like the fact Swarm is designed to be a one stop shop for all of Roccat’s newest gaming peripherals, dropping the need to install a new set of software each time. The macros can only be bound to the six macro keys. In game mode though, any non-function key can be rebound to another key on the keyboard.  I am a bit disappointed that the inclusion of Game Mode means the Easy Shift [+] functionality is gone, which provided a lot more flexibility. While a bit pointless in a practical sense, the ability to add sounds like typewriter clicks and pew pews of laser beams to typing is a fun addition. While I wouldn’t use it all the time, I found writing this review to the clacking of an old-school typewriter to be a relaxing experience. 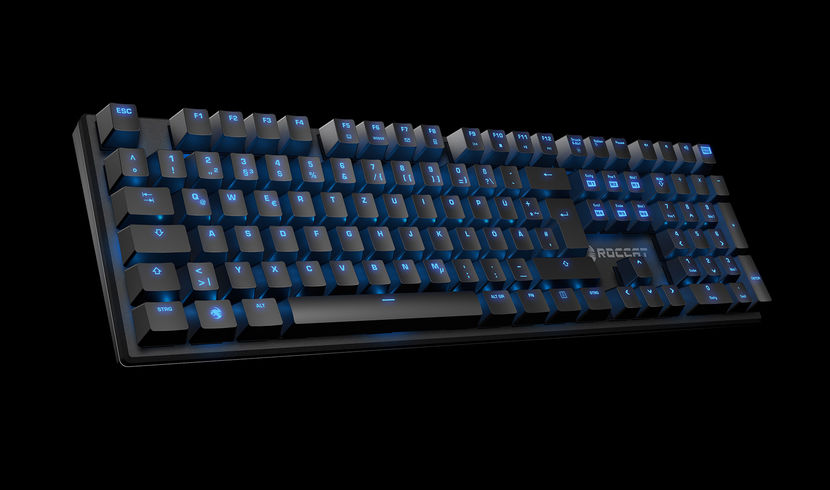 The lighting options for the Roccat Suora is a little more restrained. There are only options for a fully lit keyboard at different brightness settings, a slow pulsing “breathing” mode, and no lighting at all. Lighting modes can be cycled through using the keyboard. I found all of the LEDs to be consistent in brightness.

Unfortunately, the promised Roccat Swarm Connect software for mobile phones is still a work in progress. The software is only available on Android at the moment and is still mostly designed for the Roccat Nyth mouse. It hasn’t been updated since December 2015, so hopefully a properly working release is in the horizon.

The Roccat Suora Frameless Mechanical Keyboard is an excellent keyboard. With its sleek and professional design, people would likely be unaware of the Suora’s gaming functions without a closer look. As a person who hates tenkeyless designs, the Suora is the perfect balance of form and function. Unfortunately, the macros are a little too far for practical use and the software features are a little slimmer compared to some of the Roccat Suora’s more expensive siblings. While I would not recommend it for the macro-addicted power gamer, the Roccat Suora is a brilliant compact keyboard for the mature gamer who is looking to keep their workspace uncluttered and elegant.

The Roccat Suora is an excellent compact mechanical keyboard that looks classy, just don’t expect to get much use out of the macro functions.
8.5