The R18+ 1987 classic RoboCop is getting a PG-13 reboot as well as a mobile exclusive movie tie-in freemium video game. Let’s take some keywords from that last sentence: reboot, PG 13, mobile exclusive, movie tie-in & freemium. These are some of pop cultures most hated words and to watch a beloved classic like RoboCop get this treatment is pretty depressing. However I’m going to put my nerdy bias aside and try to write this review as accurately as possible. Also how weird is it this was released like a month before the film comes out? Usually this sorta stuff happens within the same week or something. Oh well. PG-13 RoboCop reboot freemium tie-in mobile movie game cash-in. Let’s do this. 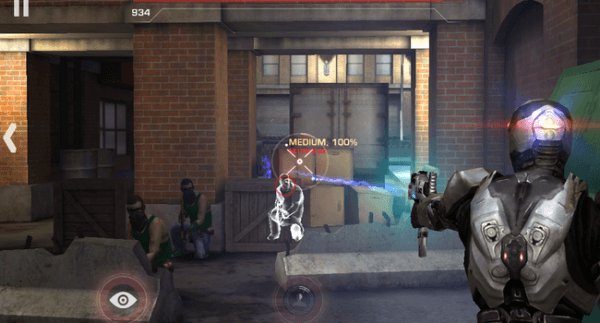 So straight off the bat this game looks like half assed. Animations are mostly stiff, but in a “developers didn’t bother” kinda stiff and not a “he’s a robot” kinda stiff if you know what I mean. The RoboCop model looks good if you ignore the human lips which look kinda PS2ish and never move when he talks, and the ED-209 robot looks decent as well. While for the most part levels look ok, some are clearly nicer than others which gives you a really “we really rushed this” vibe. Reflections off RoboCop’s armour are kinda cool though, and the menu presentation is nice so you gotta give credit when it’s due. Audio includes a Hollywood action type soundtrack and one liners like “thank you for your cooperation” after shooting like 50 dudes so at least they got that part right! 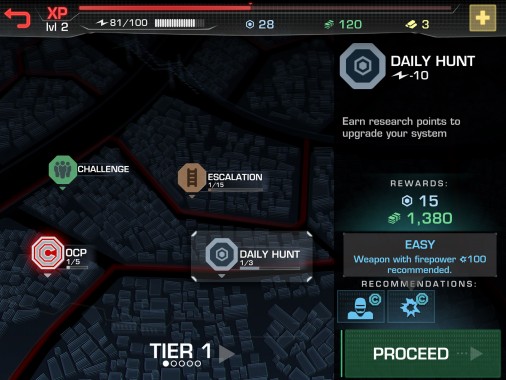 Gameplay is split into two parts, both of which make no sense. The first part is the main action of the game, a duck-and-cover shooter which makes no sense because RoboCop is meant to be bulletproof. The second part involves spending not one, not two, but three currencies is a deep upgrade system that aggressively encourages in-app purchases….which also makes no sense as he’s built to be a perfect crime fighting unit so why would he need more upgrades? In all fairness, the story doesn’t follow the plot of the movie, but rather of training simulations for preparing RoboCop, which is just as exciting as it sounds. That being said the controls work well, with the left side of the screen to aim and the right to shoot, and on screen prompts to run for cover, scan for weaknesses and let out special attacks like a focus mode and to call in drones. These missions are really just there to motivate you to upgrade more, as many missions are impossible to complete without certain upgrades. 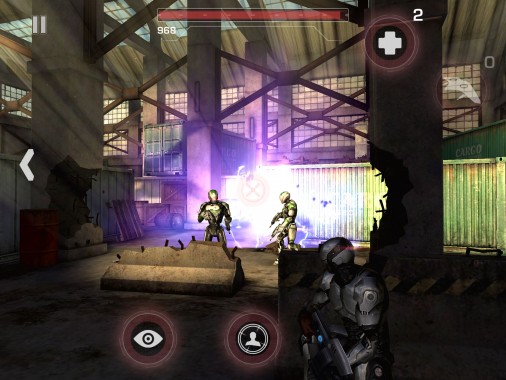 While the gameplay is lacking in depth, the upgrade system has plenty of options. These range from upgrading the suit, a variety of weapons each with their own upgrade tree, a nodes system to “attempt” upgrades….and did I mention three currencies? Everything is just there to nudge you to spend real money on currency to buy upgrades, most of which make little difference. Of coarse, even after you spend cash on upgrading, upgrading takes time, which you can spend more cash on speeding it up. RoboCop is definitely the biggest movie cash-in title I’ve played in a very long time. 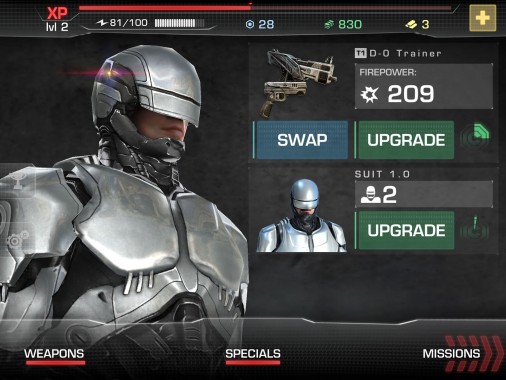 Don’t get me wrong, RoboCop isn’t completely unplayable and for the first 15 minutes or so it isn’t complete torture. The game has got the look right and the controls are responsive but other than that there isn’t much to offer here. Gameplay is shallow, unrewarding and all you ever really do is grind to upgrade for just more of the same dull crap. The aggressive in-app purchases suffocate the life out of any fun that can be found. Hopefully the movie reboot is a lot better, but I’m not holding my breath. For those looking for a decent duck-and-cover shooter of this fashion on iOS, I highly recommend EPOCH 2 instead.