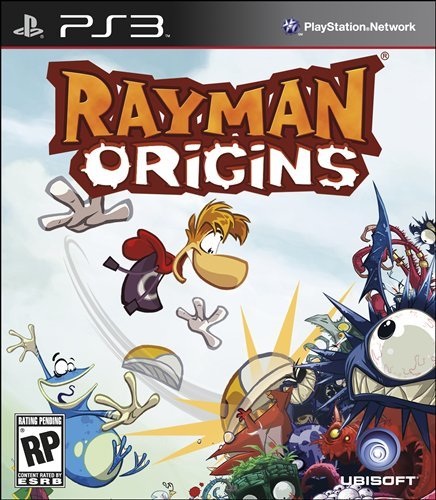 Overview:
It’s fair to say that the triple A gaming world is obsessed with reality. In a month packed with some of the biggest franchises ever seen in the medium, players can find themselves in the grim, realistic and detailed worlds of Assassin’s Creed, Uncharted, Skyrim, and Modern Warfare 3. Where on earth has all the imagination and light heartedness in gaming gone? Why must quality releases from anyone other than Sega and Nintendo try so hard to imitate reality?

Ubisoft fly in the face of fashion with Rayman Origins, a technicolour gem of a game that seems to run on whimsy. The game sees the limbless wonder and his bizarre pals return to their roots – 2D platforming. It’s been a long time coming for Ubisoft’s often overlooked mascot, who since his 1995 debut on the PlayStation has first been lost amongst 3D sequels and then overtaken by the more party game friendly Rabbids.

Series creator Michael Ancel (who is also behind cult favourite Beyond Good and Evil) returns to the Rayman world with Ubisoft Montpelier and a brand new game engine behind him. Fans of the series will have a field day with Origins, which is packed to the rafters with characters and gameplay designs lifted from previous titles, with a huge emphasis on Rayman’s original adventure. 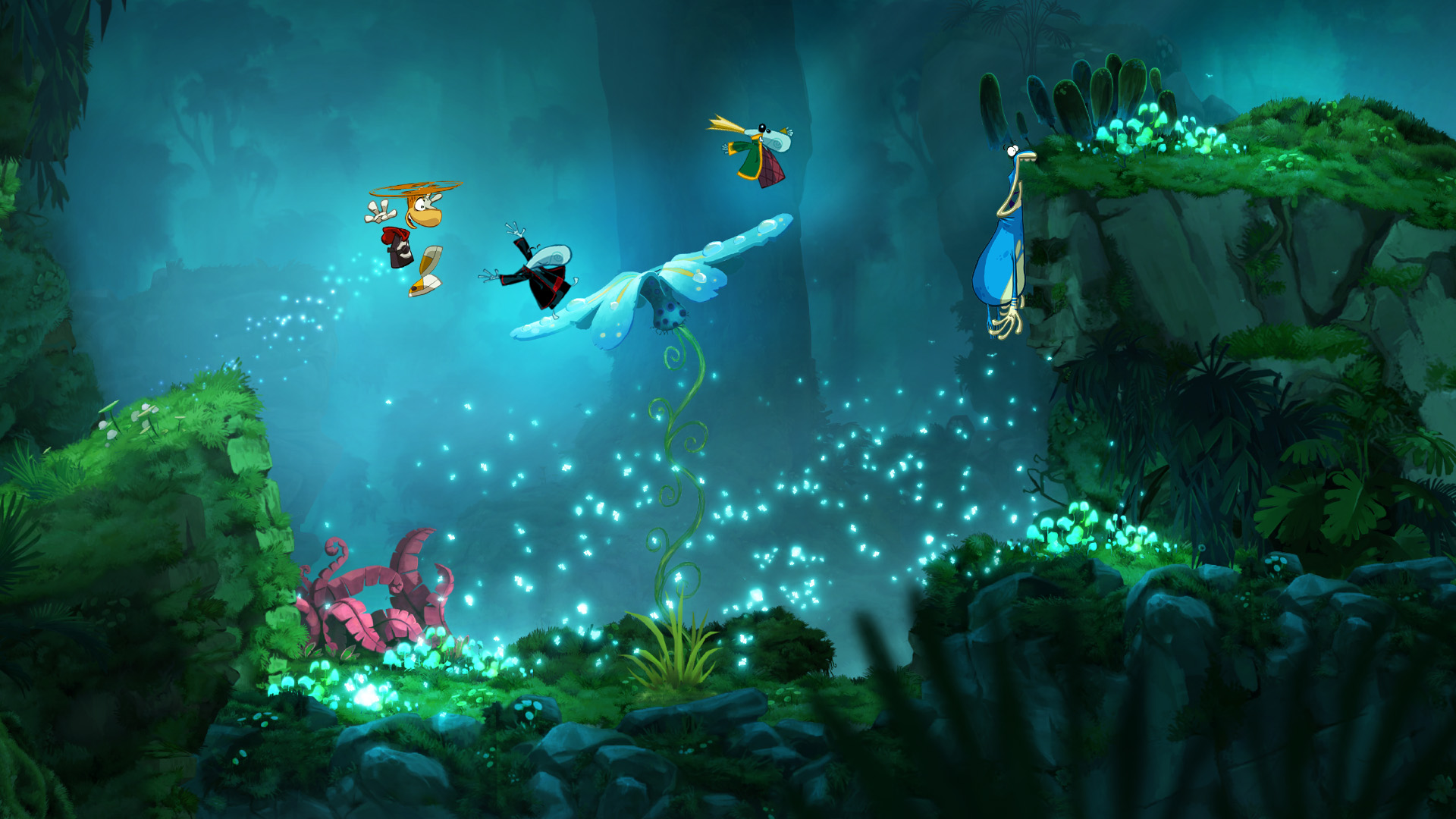 Story:
Whimsy and light are what fuel this game, and Rayman Origins thus has less depth to its plot than a Saturday morning cartoon. The game opens with Rayman and his friends snoring up a storm, sufficiently riling up an old zombie lady enough for her to behead her husband and set a flurry of evil minions loose on the world. The nasty critters imprison all the Electoons and nymphs in the Glade of Dreams, so Rayman and his friends set off to clear the world of Darktoons and reclaim their world – presumably so they can go back to sleep.

Freeing the five bizarrely well endowed nymphs blesses Rayman with new powers to fight against the unleashed monsters, and eventually leads him to rescue the four kings of the realm who have been taken over by dark influences. Together they use their magic to open a door to another realm where Rayman must face the source of all the darkness. Yes, it’s so much cartoon fluff, but that’s all the game needs. It suits the visual style perfectly, and the game design brings bucket loads of quirky charm to hook in players from the start. The characters themselves could probably use a bit more fleshing out in order to compete with genre icons like Marion and Sonic, but considering this is an origins tale, Rayman can afford to wait until later games to establish a more concrete cast of characters. 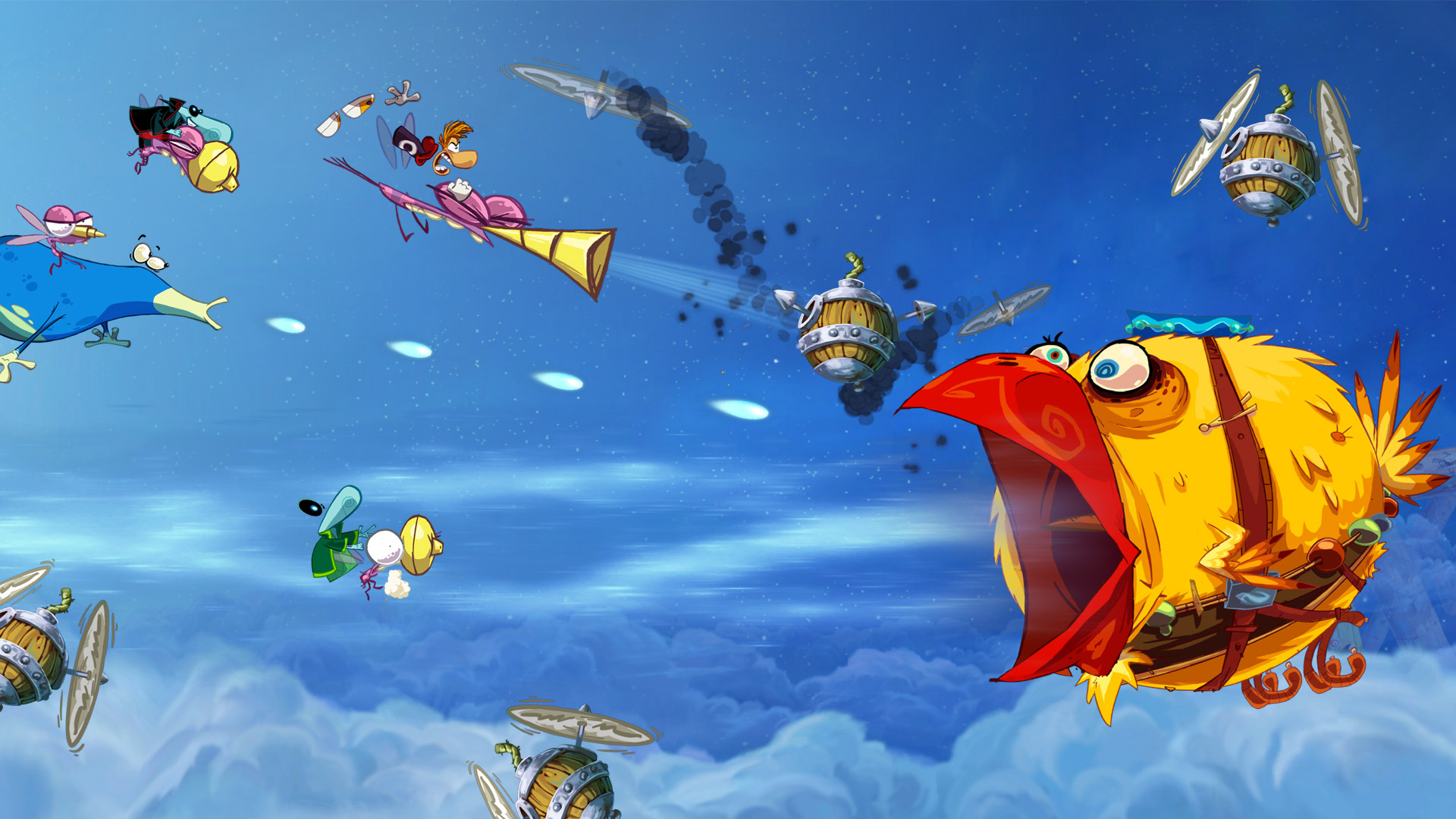 Visuals:
Rayman Origins is a visual delight- a technicolour dreamcoat in a world where brown trenchcoats are the norm. Everything is brimming with colour and imagination, every new stage unlocked bringing some hilarious new enemies and creative level design. Over five themed areas Rayman will encounter ice skating, fire breathing dragon waiters, alternately vicious and helpful slices of bouncy citrus fruit and giant mutant chickens. If it sounds mental, then you would be correct!

Didgeridoos act as moving platforms and corn kernels can be knocked into hot oil to create popcorn bridges . Everything has a pair of googly eyes slapped on it, and it’s amazing the personality that such a small detail can bring to a game. The quality of the artwork is fantastic, with some slapstick animations thrown in to give the characters some life – Globox in particular is funny to watch, hanging off platforms by the teeth and rolling his fists like the worlds pudgiest blue boxer. All of this in a lush, literally hand drawn style – it really is artwork brought to life. Origins is visually unique amongst retail titles, and I look forward to seeing what Ubisoft and other developers can do with the new engine behind the style. 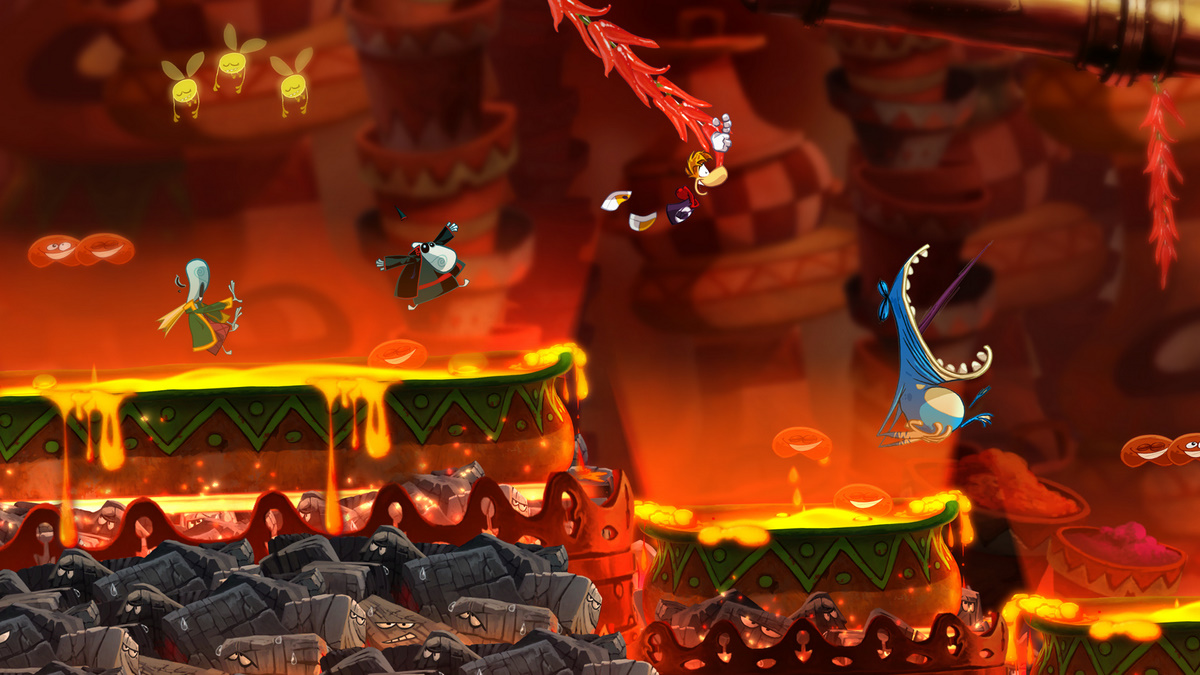 Audio:
The sound design continues the light hearted, wacky feel of the animation, rounding out the presentation package with some truly memorable music. Now I realise that the use of lots of squeaky gibberish probably doesn’t sound like a good thing, but trust me, it somehow works. The guys over at Ubisoft have managed to take high pitched gobbledegook and weave it through various themes to create music that is not only bearable, but catchy and enjoyable. Every bit of music matches the theme of the area it fills -for example the chili laden Gourmand Land is spiced up with some Mariachi style. Even collecting Lums can spark off some great sounds, collecting a King Lum sets off a joyous bit of harmony that never gets old despite it’s constant use.

The underwater theme is a particular highlight, and has players swimming along to a chilled out jazzy number complete with some squeaky solos. It all sounds ridiculous but is actually sublime, and Rayman Origins has one of the most enjoyable soundtracks you’ll ever come across. The sound effects are a perfect match, all slapstick punches and goofy vocalisations – the tutorial characters even speak in Pig Latin.

Gameplay:
Get from the left side of the screen to the right, collect everything you can along the way – simple. Fleshing out the basics of Origins’ platforming are a growing set of abilities (handed down by the rescued nymphs), some truly tricky sequences (“This place is DANGEROUS! Are you sure you want to stay? cries the game after your millionth failed attempt) and a seamlessly integrated multiplayer.

All of the sixty plus levels are accessed from the Glade of Dreams hub, where players can nip over to the Snoring Tree to change character or slip on an newly unlocked skin. The four characters – Globox and two Teensies in addition to the man himself – all have the same abilities, and only really exist for the multiplayer.

The levels on offer fill five differently themed worlds, which touch on styles and designs from the first Rayman game with music, food and forest based levels. Indeed the first area is a stylistic carbon copy of the first levels of Rayman, complete with grouchy green bad guys but sadly lacking in bouncy plums. Fans of the first Rayman should definitely prepare for a fantastic nostalgia trip! 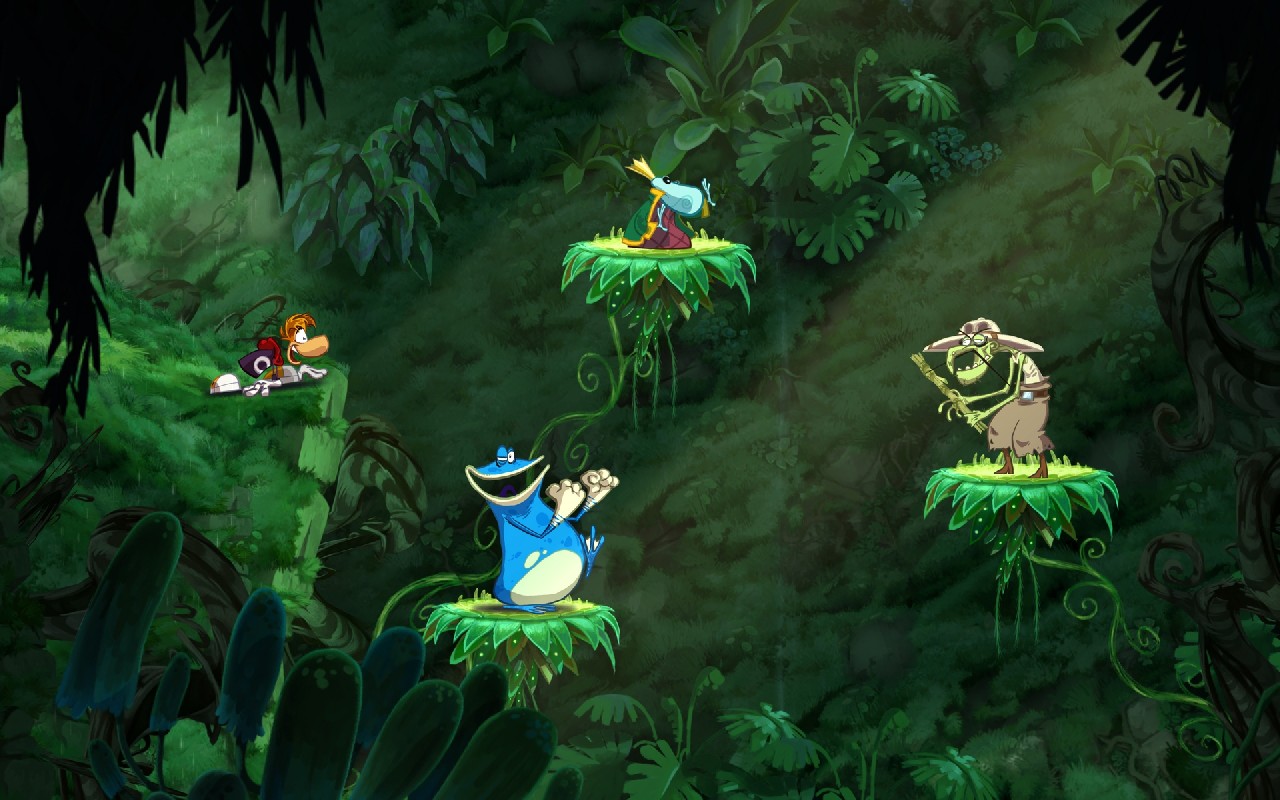 Each level is filled with Electoons, little pink dudes with blue shoes and gravity defying ponytails. Freeing them from their cages opens up new areas, and there are over 200 of them to be found! Neatly distributed to encourage multiple playthroughs, getting all of them requires some thorough exploration to find hidden doors and some serious Lum collecting. Lums are the coins of the Rayman world, little yellow blobs that hang around levels and lure you into trickier jumps and dangerous corners. Grab enough and you’ll be rewarded with Electoons, grab even more (ie: them all) and you’ll get a very well deserved medal . Replayability is enhanced even more by the time attack mode, which only unlocks after completing a level for the first time.

The controls are perfect, and in the many times you’ll get squished, splatted or squashed, it’s always going to be your own fault. Rayman and enemies alike pop into floating bubbles when hit, and defeated goons can sometimes provide useful platforms to keep you out of trouble.

It’s all fantastic fun that flows very well thanks to some great level design, with simple static platform leaps quickly transforming into more challenging dynamic sequences with cunningly placed enemies . The checkpoint system (punching through an eyeball) divides each level into neat little platforming packages, and in the later levels the sight of one is often a relief!

As well as the standard levels, each area is rounded off by a mosquito flying session and an unlockable treasure chest chase. The chases are high speed, unforgiving affairs, that along with some of the later levels and boss fights provide a pretty hefty challenge. Unless you have the reaction times of a ninja and the platforming skills of a minor gaming god, there’s no way you’ll get through these often insane looking levels the first time round.

The abilities that unlock along the way -hovering, shrinking, diving- are for the most part put to good use – the diving in particular makes way for some fantastic underwater sequences. Things do follow a very set pattern though, and playing a lot of Rayman Origins at once can make it feel a little repetitive. 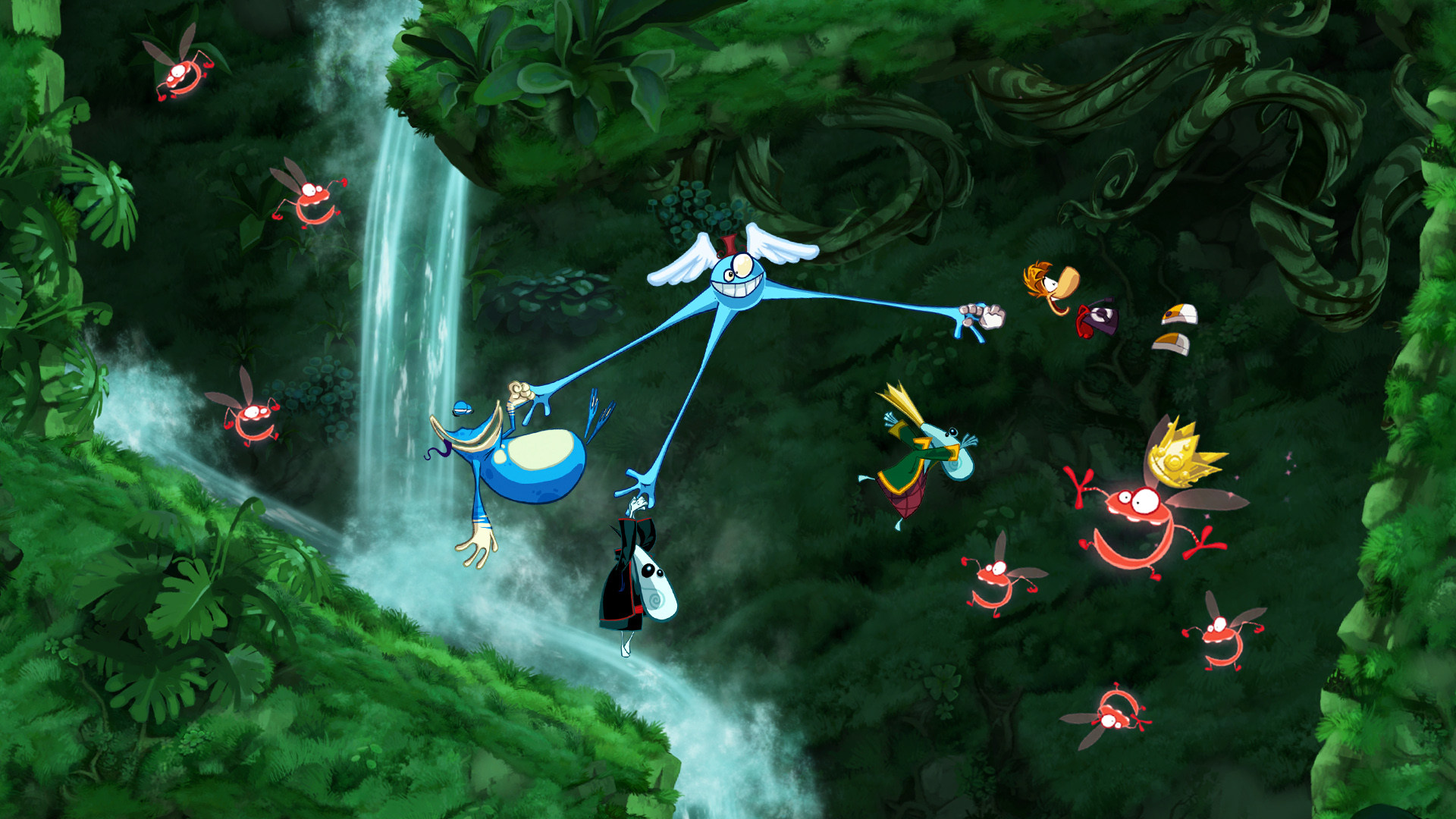 To freshen up the ride you can bring along up to three friends who can hop in at any time they like, grabbing a character from the Snoring Tree and up the ante of the platforming just that little bit more with the added chaos that comes from multiple players. Like in any great co-op you can quite happily slap the hell out of each other in order to grab the most Lums for yourself, or play nice and put those team work skills to good use. The gameplay is already a lot of fun in single player, and adding more people to the party just takes it to another level. As long as one character survives they can revive any defeated characters by popping their bubble, making sure that everyone is along for the ride no matter their ability. Discovering new levels with friends and falling into unexpected traps is a joy, and the chase levels and fast moving sequences degenerate into a flurry of jumping and shouting as everyone tries to keep up.

The game isn’t lacking in content without the co-op, but adding it transforms Rayman Origins into a game that will be picked up again and again whenever you find yourself with some friends around. If you’re sick of online multiplayer and its infestation of annoying kids, get yourself this game and restore a bit of happiness to your multiplayer life. Sure it isn’t online, but the fun comes from having the other people in the room there with you, with everyone bouncing around in this bizarre world-it would make a great starting point for non gamers as well. 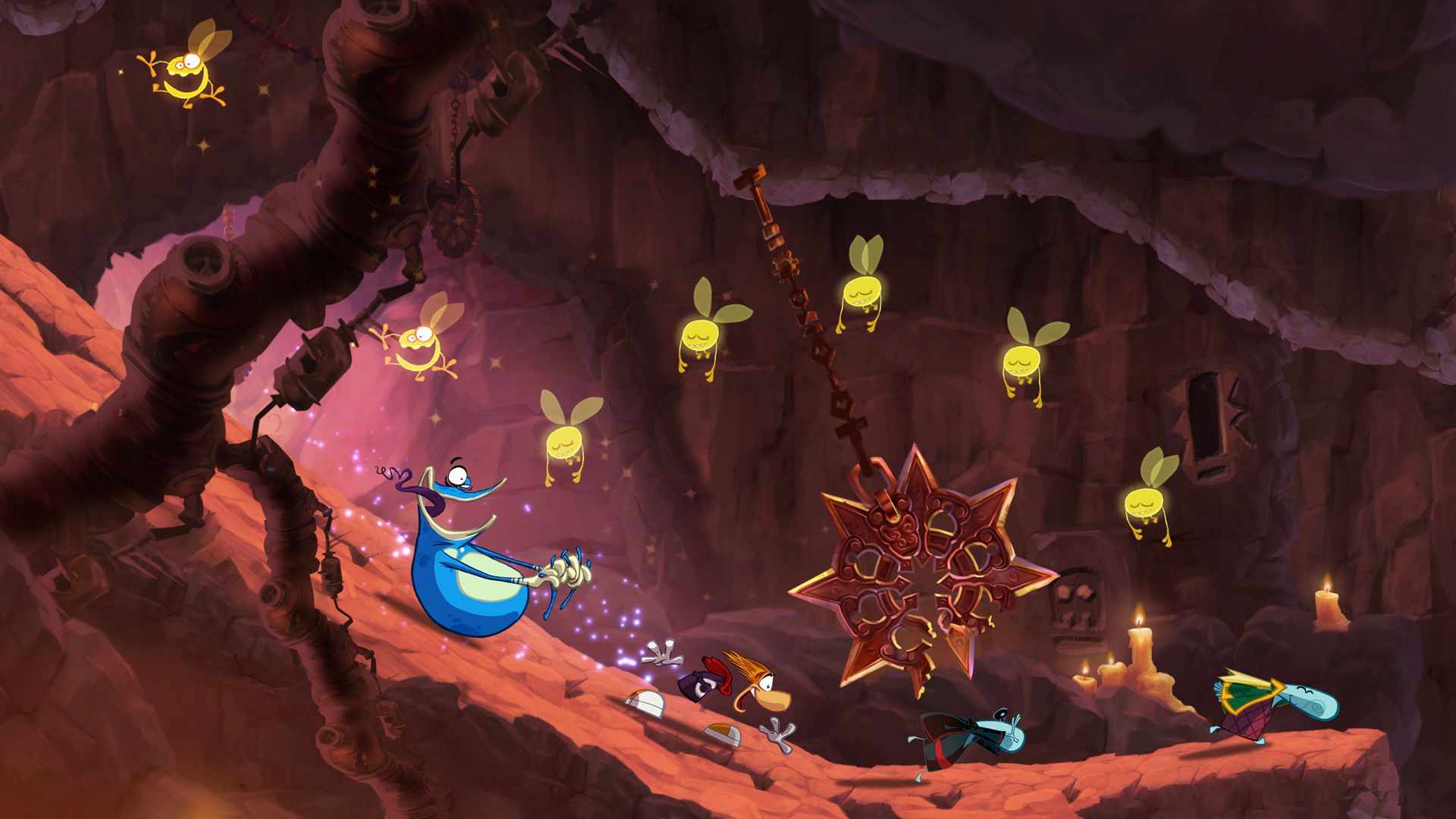 Overall:
Rayman Origins is keeping the spirit of gaming alive. In a world dominated by titles obsessed with realism, guns and war, it dares to be a joyous and colourful adventure that can push your skills to the limits just as often as it puts a smile on your face.

With hundreds of Electoons to collect it offers as much content as any other triple A title out there, and the addition of multiplayer gives it a permanent place in any gamers library. With a little bit of work Ubisoft could have a real icon on their hands, so hopefully Rayman will soon get the attention he has always deserved. Give Rayman Origins a go and give all that grim reality a break – hand drawn animation is not done quite yet, and 2D gaming is certainly not dead.