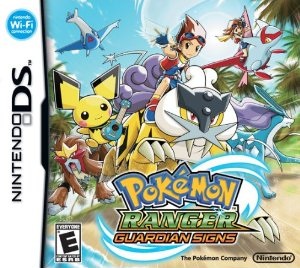 Overview:
Pokémon is perhaps the largest game franchise over the past decade. Every time that a new Pokémon game is made that focuses on capturing Pokémon and training them to take out the gym leaders it is a guaranteed best seller all over the world. The Pokémon series has been so successful that it has branched out to encompass different aspects of the Pokémon Universe. The Pokémon Ranger series has received another addition to its library in the form of Pokémon Ranger: Guardian Signs. While it may not be part of the main series, does the Ranger series still have what it takes to live up to the Pokémon pedigree?

Story:
Now the first thing to take notice of is the fact that you are going to be playing as a Pokémon Ranger. Rangers differ from trainers as instead of capturing and training Pokémon, a ranger only temporarily catches Pokémon so they can assist them through various obstacles and issues within the story that require that Pokémon’s abilities to help them out.

In Guardian Signs you take control of a rookie Ranger who is just arriving in the Oblivia region. The reason that you were assigned to this region is because a group of criminals known as The Pokémon Pinchers have been capturing Pokémon illegally and using them to further their criminal careers and committing crimes using these illegally captured Pokémon. 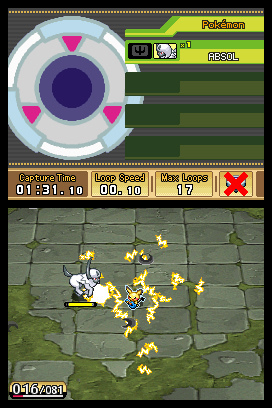 The Pokémon Pinchers have a much more devious secret behind their crimes however and it is up to you to put a stop to them. To do this you are given a Pokémon partner that will be along your side to put a stop to this evil plan, a Ukulele Pichu. This Pichu who carries a Ukulele around with it will be your partner nearly from the beginning of the game and puts a bit of a humanized twist on the Pokémon that you work with.

Unfortunately the storyline for Pokémon Ranger: Guardian Signs is very flimsy at best. Once the story does start to develop past the initial bad guy image it starts to move at a steady pace and develop nicely. However the build up to this point isn’t handled well and the overall narrative just feels tacked on to the gameplay to offer some structure to the experience.

Graphics:
One thing that Pokémon Ranger: Guardian Signs does excel at is showing off just how great the Pokémon themselves look. You will see over 300 different Pokémon completely animated for the first time as before we only witnessed them in 2D battle screens. This is evidenced by the fact that any Pokémon that you capture to aid you can be seen following behind your Ranger if choose to.

Besides the Pokémon the rest of the game looks very well done as well. Every environment you experience is very well drawn and nice to look at, especially the battles themselves. There are times within the battles that you can experience a drop in frame rate due to lots of attacks happening at the same time. However this is usually only the case when handling Legendary Pokémon, or more difficult boss battles.

Gameplay:
One of the most noticeable differences that players will experience right off the bat is the fact that Pokémon Ranger: Guardian Signs is more than a little different from your standard Pokémon titles. Instead of capturing Pokémon in the middle of battle with Pokéballs, you instead will use something called the Capture Styler.

The Capture Styler makes complete use of the DS’ stylus (straightforward name and all) and requires that the player draw circles around the Pokémon that they want to join them temporarily. Pokémon will be weakened for every circle that you complete, and when the player makes more than one circle in a row it does extra damage. If the Pokémon however were to hit the lines of the circle before it was completed then the circle would be broken after a period of time. 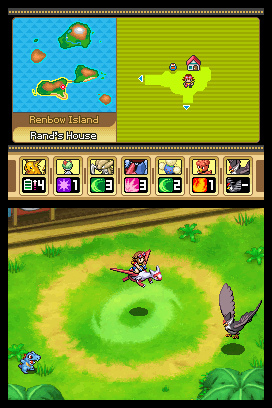 The stylus itself is treated as something of a Pokémon itself, as you capture Pokémon to help along your journey your Styler will level up as well by receiving Ranger Points. You can use these Ranger Points to customize your Styler’s abilities to your liking. There are a handful of different customizable options such as making the lines stronger which causes circles to raise the “friendship” meter faster to simply being able to make it have more HP. While this is a neither complicated nor in-depth feature it does give the option to customize your Styler to your gameplay style instead of having to deal with a structured level up system. There are other ways of obtaining Ranger Points up as well, such as finishing Guardian Signs plethora of side quests. These side quests, while not important to the gameplay, are interesting enough and can be used for a small grinding session in case you need more Ranger Points to customize your Styler.

The reason that I mentioned friendship before is the fact that all Pokémon within this game are only temporarily with you. These Pokémon do not become yours once you become friends with them. They will follow you around as long as you need them, but will leave immediately after they help you or their amounts of helping are used up. The Pokémon themselves are also able to help out in battle as they will deal certain amounts of damage to the Pokémon you are trying to befriend and make it easier to obtain. They do not disappear when they are used in battle in such a manner which is a nice touch, they still happen to vanish after use outside of battle.

One of the biggest parts of Guardian Signs and all Pokémon Ranger games is the fact that you have to use the abilities of the Pokémon following you to make your way through each dungeon or path. This is accomplished through having not only the Pokémon of the right type, but sometimes even the species as well. The puzzles themselves all wrap around this fact which can create tedious gameplay at times due to the fact that if you do not have the right Pokémon for the job, you must go get one and come back simply to advance. 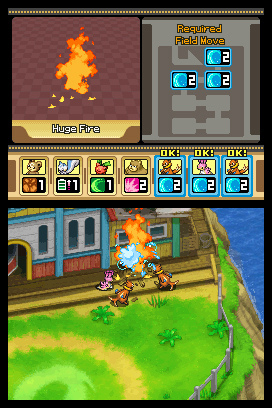 Now we mentioned the fact that there are circles that should be drawn to become friends with all of the different Pokémon you can find and use them to make the world a better place. But the game is named Pokémon Ranger: Guardian Signs. The reasoning for this is the fact that the game includes something known as Ranger Signs. These Ranger Signs range from a variety of outcomes and designs that the player must draw on their screen with the stylus.

Some Ranger Signs are used for simple reasoning as to summon an older Pokémon to help you out on your journey. But they can also summon different Pokémon to help you out which is a useful feature if you happen to find yourself stuck with no Pokémon able to make their way through the problem. The interesting bit to summoning different Pokémon through the Ranger Sign is the fact that you can even summon a legendary Pokémon to help out with your quest which not only is a helpful feature, but also a nice surprise at the same time as you never know who may show up.

Overall:
Now fans of the classic Pokémon series may find themselves in a whole new world as far as Pokémon Ranger: Guardian Signs goes, but that does not make it a bad thing either. Fans of the Ranger series itself will find more or less of the same game that they love inside as well. The reason that it isn’t a bad thing to try the new series of Pokémon games is simply because it allows players to see the Pokémon world in a whole new light. Sure the story may not be worthy of praise and can easily be forgotten as you slog through a dungeon the gameplay is unique enough to keep the player wanting more.

I give Pokémon Ranger: Guardian Signs: